Pandemic and the new world of remote work have exposed the additional challenges women continue to face in Japan.

Amid wave after wave of Covid-19 in Japan, Mariko, a college lecturer and mother, has been working and raising her four-year-old daughter in an apartment shared by a family of four in Tokyo.

Though her workplace never closed, she had to move her classes online when coronavirus cases spiked. The transition was not as smooth as she thought, especially when her daughter's kindergarten was temporarily shut down after one student tested positive last year. The child's teachers had to move classes online while waiting for health authorities to check the school and ensure safety.

"It was her first time joining online classes," recalled Mariko. "I spent the night preparing lessons for her discussion with teachers and classmates. I also set up the computer for her online classes. But she is very young, so she wanted to touch a keyboard and a mouse.

"At one point, her online class disappeared from the screen. I had to drop my work to help her. Basically, I could not work throughout the week."

Taking most of the responsibility for parenting, Mariko lost opportunities to expand her own knowledge and presence in the scholarly field during the pandemic, when webinars and online meetings have been increasing in number all over the world.

Her university has been collaborating with western academics and institutions to arrange online events, which often overlap with the times in the early morning or late night when Mariko must look after her daughter.

"Because of Covid, now we have the flexibility of home and office working," she said. "But if there are lots of inflexible meetings required, women with kids still have a hard time.

"If we can't join them, we may be considered bad workers. We may lose the opportunity to get promoted, or in the worst situation, we get fired."

Mariko is not alone in experiencing exhaustion and career disruption when taking a double shift as a working mother in the context of Covid, in which many companies and organisations have adopted a hybrid work model that incorporates office and remote working.

Other working mothers have experienced similar challenges. Japanese employees, male and female, are often under pressure to work long hours in the office, part of a unique work culture favours hard-working employees and values face-to-face contact.

This culture has extended to long hours and frequency of online meetings that impose an unfriendly working environment on mothers with young children -- whose household burdens, including childcare and leading homeschooling, are amplified during the pandemic. 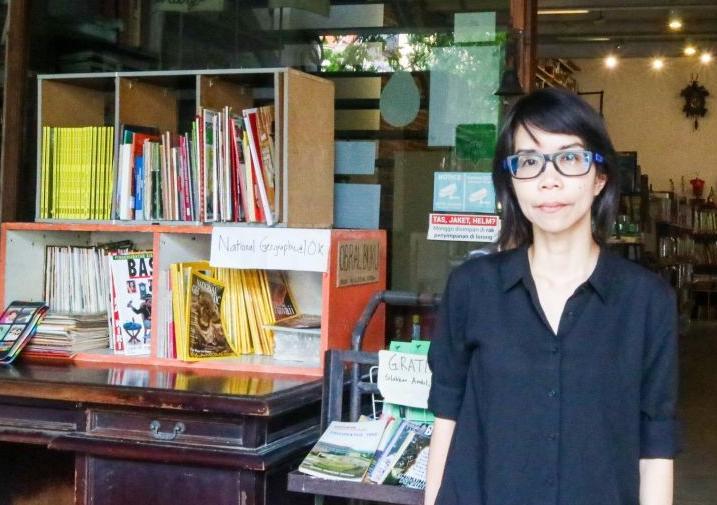 A mixture of home and office working will likely persist in Japanese companies and organisations in the post-pandemic era. In a recent survey of 173 Japan-based foreign-affiliated and Japanese global companies, the multinational recruitment agency Robert Walters found that 86% of them said they would continue to offer remote work.

This finding corresponds with other surveys of global companies that plan to pursue a hybrid work model, citing the benefits of cost-saving, ability to attract and retain young talent, and flexible hours that improve employees' productivity and -- so employers believe -- work-life balance.

Though Japan has never imposed a mandatory lockdown, its government has called for voluntary business closures and adoption of work from home, in which both public and private-sector employers cooperated well.

Honda Motor, for example, allowed 30,000 employees to work from home and introduced work-from-home allowances that cover utility bills and the costs of equipment when the government declared a state of emergency last year.

The electronics giant Hitachi and the financial services firm Nomura announced that they would aim to continue with working from home beyond the pandemic. However, gender inclusiveness does not seem to have been addressed sufficiently in this new era of work.

"Single people, parents with older kids, or those who left home for college or work would probably have more career opportunities under a hybrid working model," said Chika Shinohara, an associate professor of sociology at St Andrew's University in Japan. "They can have a business talk with people anytime and work to their full capacity while working remotely.

"Women who need to care for their young kids, elderly, or family members with disabilities can't take on a lot of work under this circumstance. Remote work will exacerbate gender inequality if the government or employers don't address the gender gap."

Ms Shinohara, who has studied women in employment, said Japan's economic slump has already widened the gender gap in the past decades.

Many young women who are entering the labour market during the current challenging times are finding it difficult to secure lifetime employment, a hallmark of the Japanese post-war labour system that commits to hire employees for their whole working life and provide welfare to workers and their families. Instead, many have ended up having to accept contracted or informal work and many lost their jobs as companies cut costs during the pandemic.

According to a report from the Organisation for Economic Cooperation and Development (OECD) on women's roles during the Covid crisis, economic crises driven by infectious diseases often affect women on a significant scale because their roles as caregivers led to higher infection rates.

Women also make up a large number of workers in sectors that have been hardest hit by the pandemic, such as air travel, tourism, retail, accommodation services, and food and beverage service. 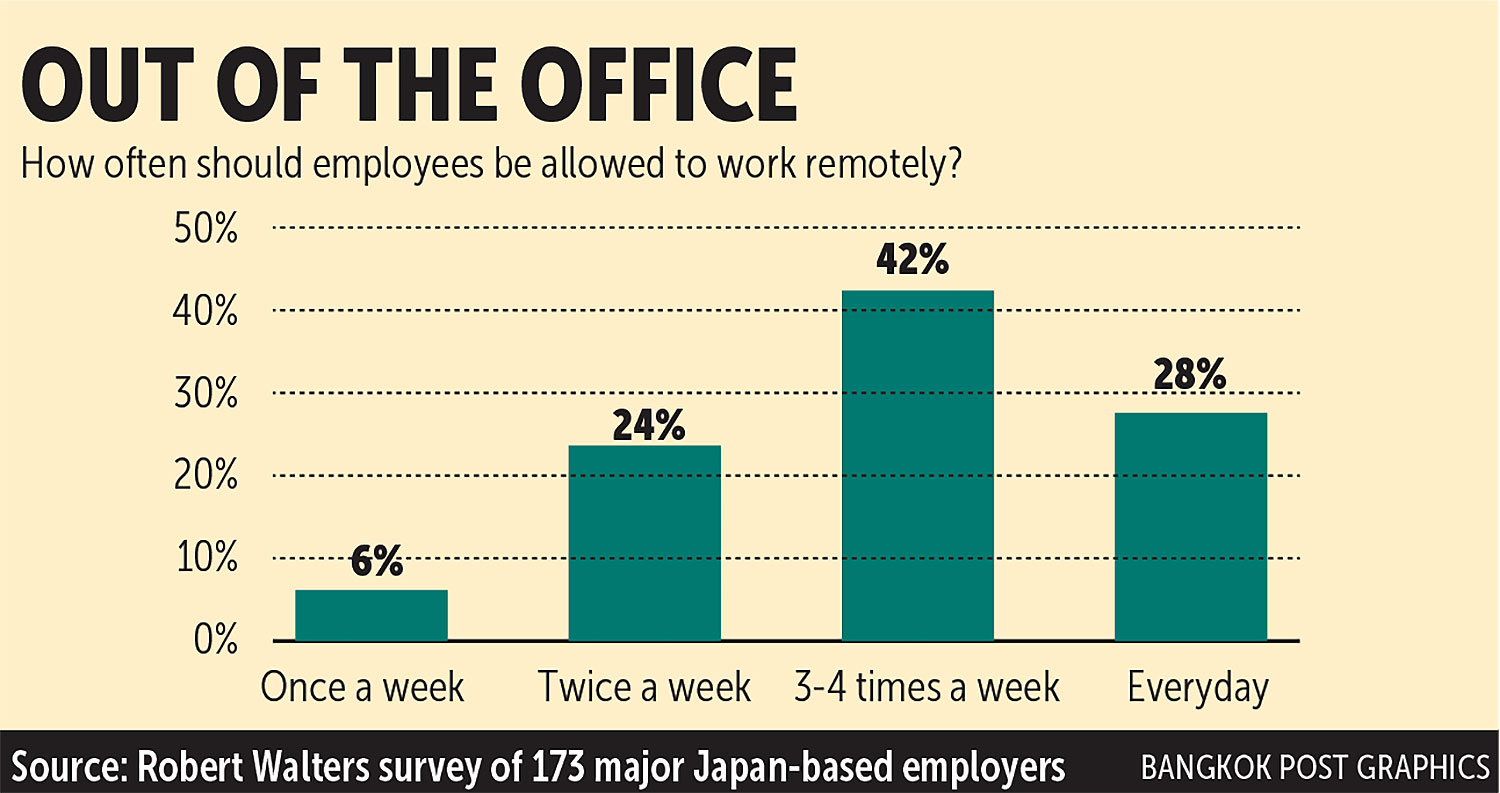 The Global Gender Gap Report 2021 from the World Economic Forum places Japan among the lowest-ranked countries in East Asia and the Pacific in terms of progress toward gender parity. The country is ranked 18th out of 20 in the region and 119th out of 156 globally.

This has contributed to low shares of women in parliament and senior roles in the workforce. The share of women in part-time work is almost twice that of men (50.8% versus 22.2%). The average Japanese woman's income is 43.7% lower than the average man's income.

The report cites data from Ipsos, a multinational market research firm, showing that more extended double roles during school closures, coupled with limited availability of care services, have contributed to increasing stress, anxiety about job insecurity and difficulty in maintaining work-life balance for women with children.

The findings suggest that women with young children, if they lack support, may drop out of the labour force because of job insecurity, unpromising career paths, and a more intensive household burden.

Looking at the regional picture, the report estimates that if current trends continue, it would take 165 years to completely close the gender gap in East Asia and the Pacific, compared to 52 years in Western Europe and 61.5 years in North America.

"Offering flexible hours and the ability to work from home can help, but it has to be complemented by other measures such as providing working tools, family-friendly working hours, and benefits such as paid leave and parental leave."

Japan has the most generous parental leave in the world. Fathers can take up to a year off, two-thirds of it with full pay, after the birth of a child. But OECD figures show only around 3% of Japanese new fathers take advantage of paternity leave, pushing childcare responsibilities to mothers.

This is linked to the country's hard-working corporate culture that leaves workers feeling guilty if they leave work to colleagues. Many also believe that taking parental leave will likely lead to low performance evaluation scores and affect future promotion possibilities.

The Japanese government is well aware of this and aims to lift the ratio of men taking parental leave to 30% by 2025. If fathers take advantage of the offer, mothers may feel encouraged to stay in the workforce and consider having more children -- the scenario that could help resolve the problem of the shrinking workforce in Japan's ageing society.

Local administrations have offered incentives to encourage childbirth at the prefectural and district level, while attracting families with young children to reside in their areas. These include providing allowances to families with more children, free nurseries in walkable distances, and free tablets for online study.

"After Covid, I think the Japanese government will prioritise resetting the economy. But Japan is an ageing society with fewer kids. It's urgent for the government to support the younger generations to maintain their work and families," said Assoc Prof Shinohara from St Andrew's University. 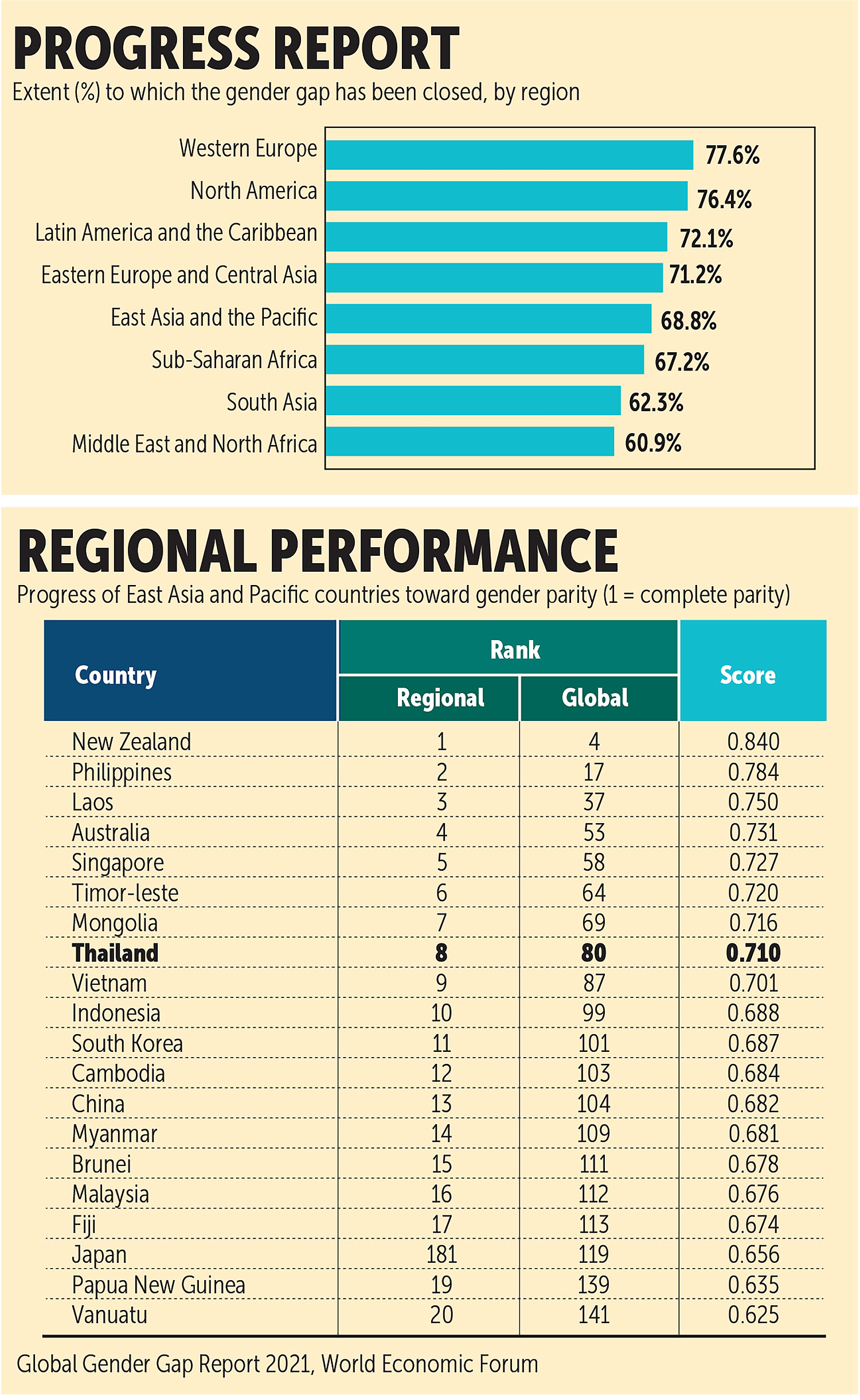 Many corporations have responded to the government's initiatives by providing parental schemes that make a difference for women with young children.

Salisa Namchaisiri, a full-time employee of Mitsubishi Heavy Industries based in Tokyo, gave birth to her child in 2019, just three months before the pandemic broke out. She was eligible to apply for the company's parental leave, so she took one year off to care for her newborn baby, during which the company and the district administration co-paid 66% of her salary.

When she returned to work, she managed to work from home amid the pandemic because she could put her child in a nursery during her working hours. Luckily, the nursery was never shut down during the pandemic.

Her company also provides a child-rearing programme for female employees who can request to work a minimum of four hours a day without affecting their annual leave and performance evaluation. "Because I'm employed and living in a good system that provides maternal support, having a young child during the pandemic or when working at home does not affect my career path," said Ms Salisa, a Thai married to a Japanese man.

"Being a full-time employee in a conglomerate is more secure than at smaller companies, in which employees may not be able to take advantage of a parental scheme because they are pressured to work and not to cause trouble to colleagues."

Some women seek an environment that supports their roles as working mothers. Noriko Yamamoto, 46, a junior high school teacher, decided to leave a city for her rural hometown in Fukui Prefecture, where she can get childcare assistance from her parents.

"In the cities, many women give up their careers to look after their kids because they don't have anyone to help. But those in rural areas can continue working because they have the previous generation help with childcare," said Ms Yamamoto, whose youngsters are nine and 14 years old.

She is currently taking an educator course to get an elementary teaching licence, a step that gives her a chance to get promoted.

"I want to work and earn money by myself. I don't want to ask permission [from my husband] to buy things. I think women today can have more opportunities than those in the past if they get consistent support."