The 'yak' statue at Suvarnabhumi International Airport wears a face mask as part of a campaign to remind people to continue wearing masks and observe social distancing to prevent transmission of Covid-19. (Photo: Wichan Charoenkiatpakul)

Thailand opened its doors to tourists from 63 countries on Monday with mixed feelings - hopes for brighter economic prospects on the one hand and trepidation in case the Covid-19 situation deteriorates on the other.

Up to 92.4% of people interviewed by the Department of Heath said they are worried about the reopening, with the fear of a new outbreak their leading concern, according to the department's latest poll conducted in 17 provinces, including Bangkok, where tourism is set to restart.

The business sector is aware of the risk but insists the economy needs a booster, with clearer travel regulations. 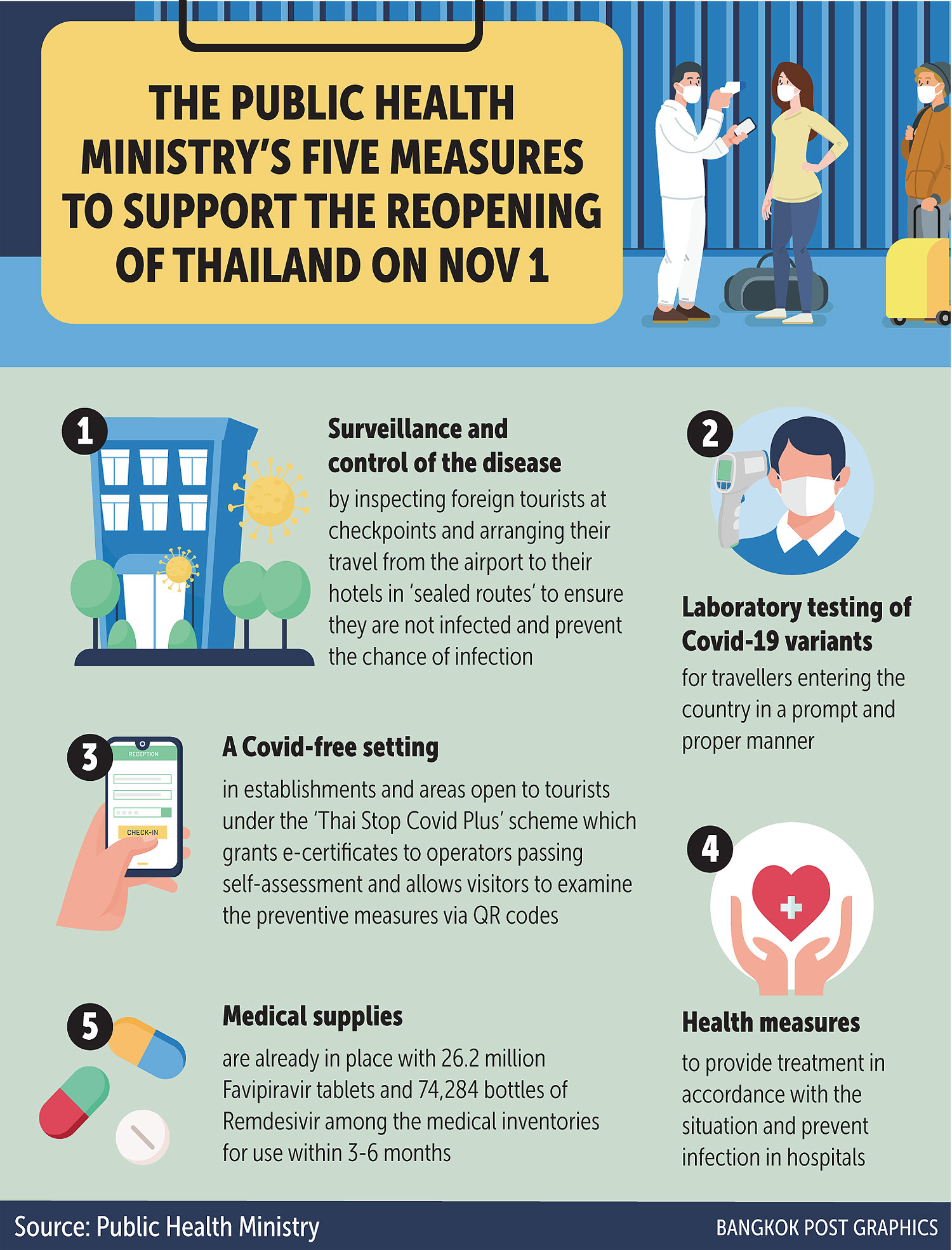 Tassapon Bijleveld, executive chairman of Asia Aviation (AAV), the largest shareholder of Thai AirAsia (TAA), said the country's reopening is necessary for driving the national economy, which has been stagnant for too long since the Covid-19 pandemic emerged early last year.

"We cannot use public health to lead any policy making decision like in the past, but should prioritise an economic approach when opening up the country from the end of this year," said Mr Tassapon.

He said the current situation is different from last year as a higher proportion of local residents have already completed their vaccinations, while the Public Health Ministry also learned its lesson from severe outbreaks last year and procured more types of vaccine that will be able to cope with new variants better than the most commonly used vaccine used earlier this year.

"Back then, it was hard to predict that the country would face the delta variants. However, we now have prepared our protection and this situation could prep the country for safe reopening," said Mr Tassapon.

However, the local low-cost carriers like Thai AirAsia and Thai AirAsia X might not resume international operations until March as they have to wait for more mature demand after Thailand tests the water with the reopening scheme during the first 3-5 months.

"We have our airplanes ready for serving any routes that have passenger demand, but we also anticipate that some important markets, led by China, might not resume international travel in the next few months," he said. 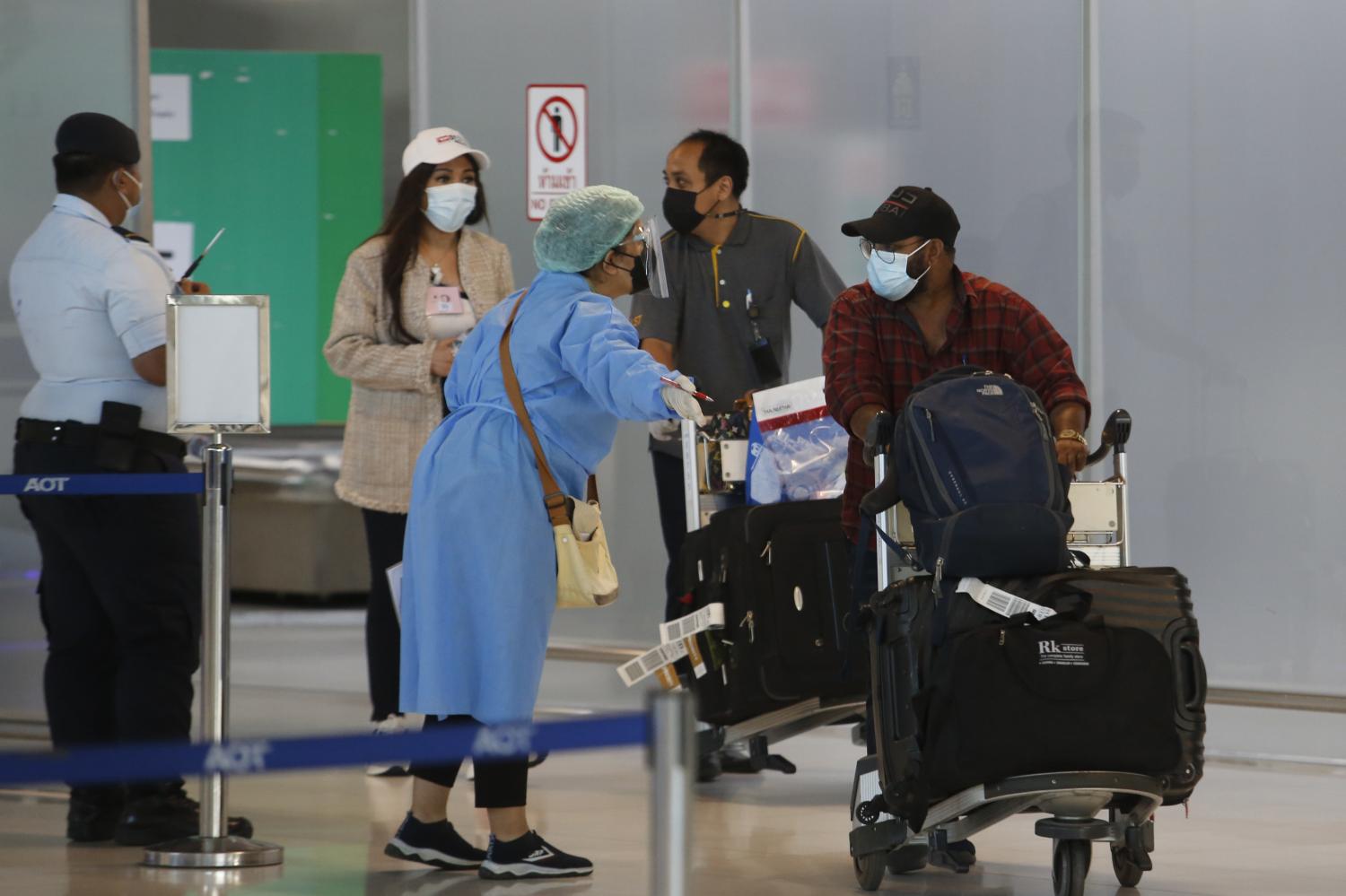 Chotechuang Soorangura, managing director of NS Travel and Tours, said as some relevant regulations and the entry registration system have not been made ready prior to Nov 1 to let tourists have enough time to study and plan their trips for the upcoming high season, most tourism operators don't expect an influx of tourists in the first month.

"It's too late to secure the demand in November as tourists had to plan their trips in advance, particularly from Europe which already booked holidays elsewhere that provided them with more clarity," said Mr Chotechuang.

He said the ambiguity of regulations, which also required a longer period to be settled, is the main obstacle with regard to policymaking. Not only for international markets, but also the domestic tourism reopening, which started in October, as it also experienced the same setback as the stimulus programmes which were only able to attract a lower number of participants than was expected.

"All rules and regulations were usually not ready when the starting date approached. There's also a lack of continuation as tourists and tourism operators have to learn new things, and new processes every time," said Mr Chotechuang. 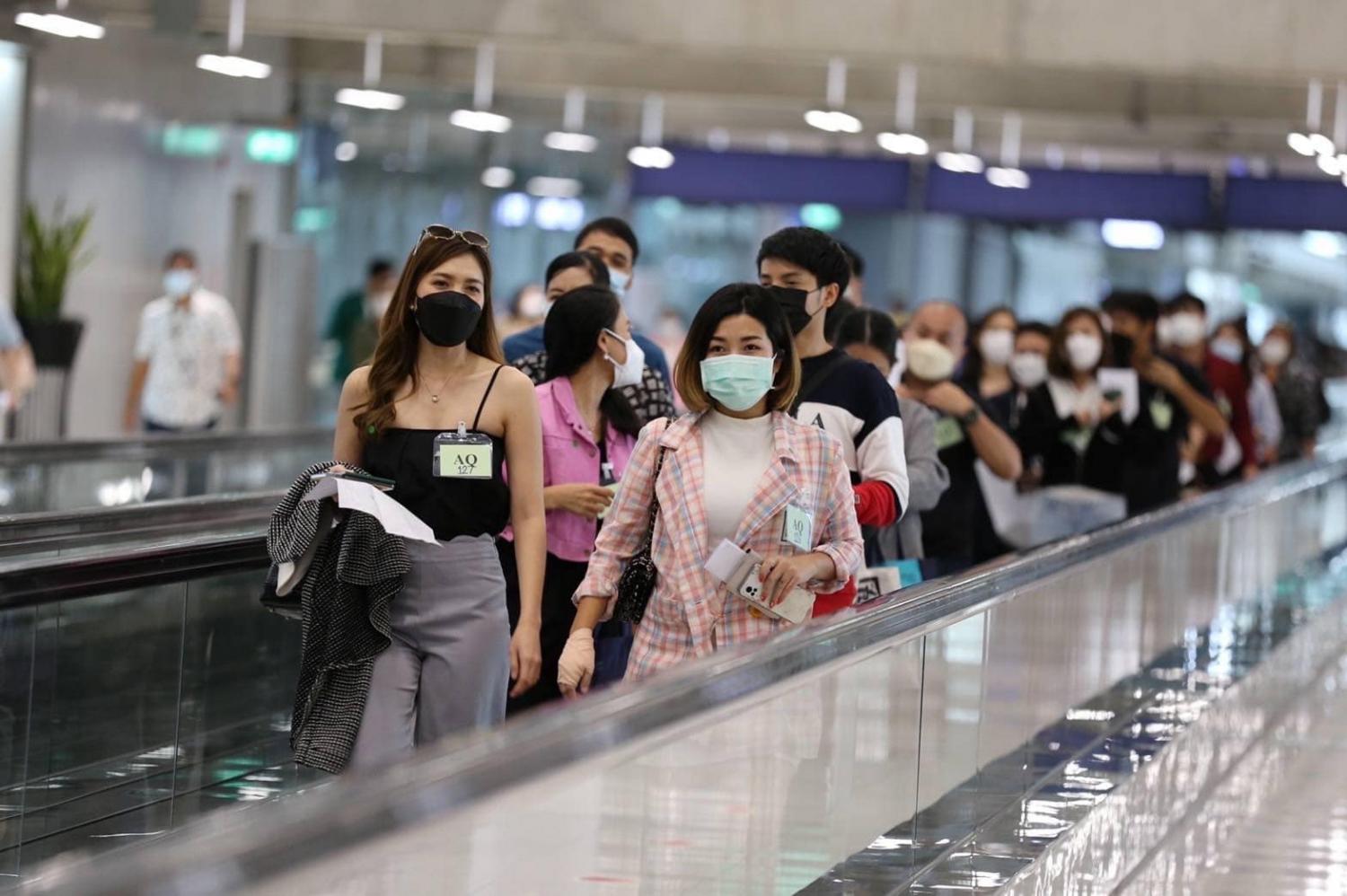 Before the pandemic, international roaming services created several billions of baht to local major mobile operators every year, but the country's largest carrier Advanced Info Service (AIS) does not expect the country's reopening from Nov 1 would lead to substantial revenue from this service in the near future.

AIS chief executive Somchai Lertsutiwong said it is too early to predict the result of the reopening following Nov 1 as the infection rate per day remains high, although it is better than the situation in the past one or two months.

It is hard to foresee how many Chinese tourists – the major tourist group to Thailand – will come to the country in the near future as China has not yet relaxed overseas travel restrictions, including those coming to Thailand.

He declined to predict the number of foreign arrivals who will come to Thailand over the last two months of this year, though some state agencies expect the number could be around 1-2 million.

According to him, Bangkok and some major provinces, such as Phuket, appear ready for the reopening due to the availability of hospitels and related public services.

The reopening, however, needs readiness among all the provinces to curtail the spread of the Covid-19.

In terms of the business outlook, Mr Somchai said AIS will gauge the results of the reopening in the next two months so it can come up with its strategic business plan for next year. 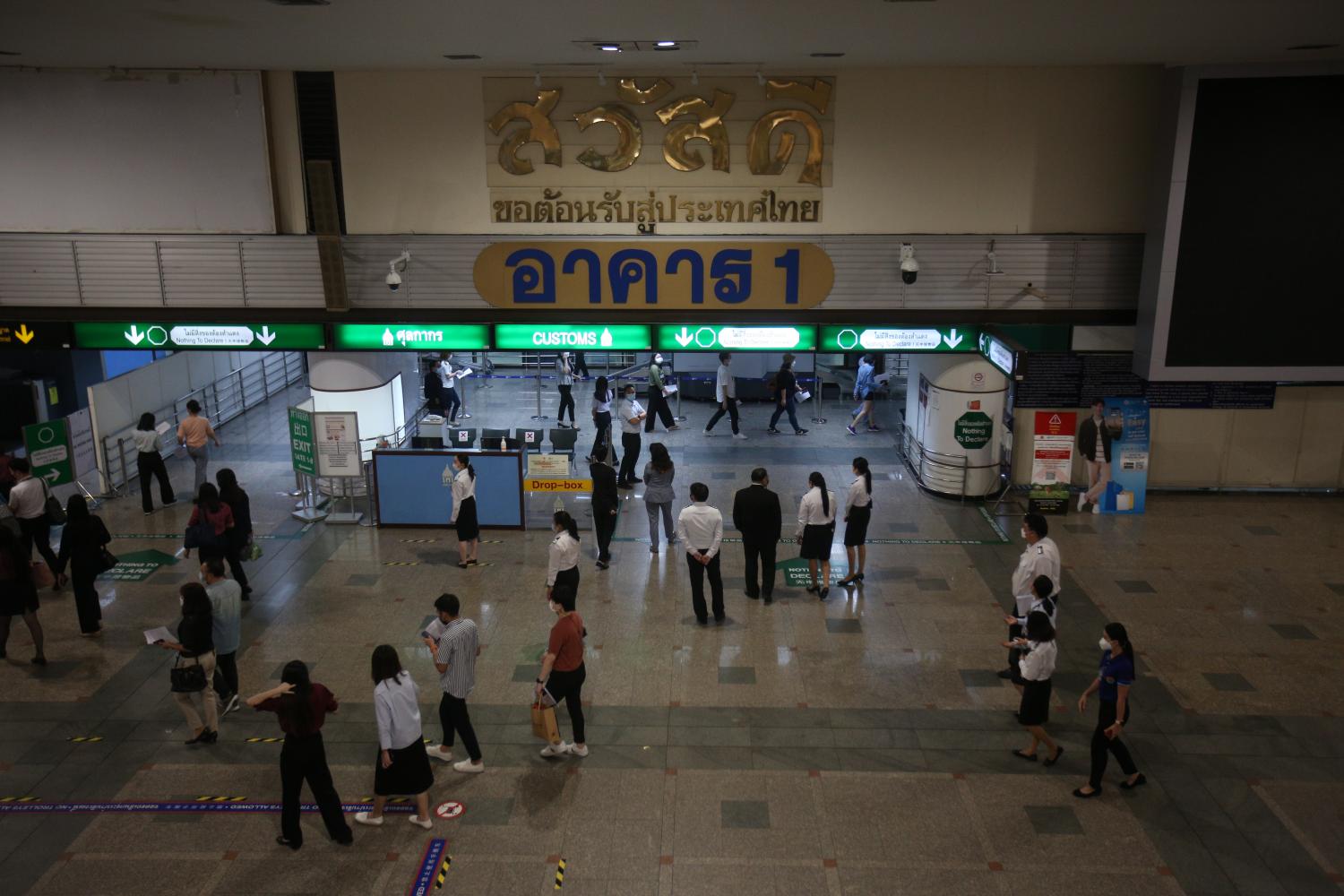 Sanan Angubolkul, chairman of the Thai Chamber of Commerce said the business sector agrees with the government's plans to reopen the country on a step-by-step basis, noting that the country's reopening would help expedite the economic recovery and facilitate domestic and international travel not only for tourism but also for trade and investment.

"This will be an important mechanism for the Thai economy to move forward," he said. "Although there are still many infected people, the number of new cases has begun to decline thanks to more vaccine coverage and various strict measures still in place to contain the spread of the Covid-19 outbreaks."

Echoing Mr Sanan, Voralak Tulaphorn, chief marketing officer at The Mall Group Co, said the company is glad to see the government has cautiously reopened the country to make the overall retail atmosphere turn around to a normal condition.

"We don't see it necessary to hurry to reopen our country. If we do it at full steam, we don't know what will happen next," she said.

Mr Sanan said the Thai Chamber of Commerce remains concerned about communications between Thai citizens and entrepreneurs, especially regarding measures for travellers from their countries of origin to enter and exit the country.

"Responsible government agencies and entrepreneurs are required to come up with a clear understanding in dealing with tourists and the accommodation system," he said.

"The Thai Chamber is also worried about a reoccurrence of the Covid-19 outbreaks if the government allows the sale of alcoholic drinks at hotels and restaurants. If a new outbreak occurs, the Bangkok Metropolitan Administration needs to set up a command centre to consider immediate measures to reduce the risks and get ready to adjust measures, especially to restrict the infected areas," he said.

Mr Sanan also proposed that the government continuously evaluate the country's reopening and have clear communication to build up people's confidence.

"Everybody needs to follow the protection guidelines to reduce the risks from the new outbreaks and should not violate the guideline measures," he said. "If no new outbreaks happen, the economic activities will gradually recover to become normalised in the future."

While admitting a new round of Covid-19 outbreak is possible following the reopening of the country, the Federation of Thai Industries (FTI) said any unpleasant impacts could be reduced or even avoided if preventive measures against the pandemic are made stronger.

The FTI insists it is the right time to reopen the tourism industry despite growing concerns over the negative impact.

"We reopen the country, but this does not mean we will let our guard down. Wearing masks is still a must," said Supant Mongkolsuthree, chairman of the FTI.

The state's ongoing attempts to curb the spread of the virus, including mass vaccination for the population and measures against disease transmission at various venues, are good but must be tightened to better cope with or prevent unexpected events after the country is reopened, he said.

The industrial sector will also carry out measures more vigorously to protect factories against Covid-19 infections, which earlier threatened to harm manufacturing and the export market.

One measure is bubble and seal, which is used with factories with more than 200 workers.

It is aimed at restricting travel among employees. Workers may need to stay in factories or only travel between their dormitories and workplaces, according to media reports.

The government earlier also launched a factory sandbox scheme that includes vaccinating workers and setting up field hospitals or factory accommodation isolation facilities within their compounds.

Strict protection of factory workers against the disease was badly required when the Industry Ministry reported in August that Covid-19 had spread to the manufacturing sector at a worrying rate of 13 infected factories a day, with food and electronics industries at the top of the caseload table.

Soaring Covid-19 infections in the industrial sector earlier caused concern over a potential scarcity of domestic goods, which would hurt consumers who have already suffered from weaker purchasing power.

Kriengkrai Thiennukul, vice-chairman of the FTI, warned that if infection rates in factories had not stopped, Thailand would have struggled to avoid the impact of supply side disruptions.

"A new outbreak can flare up as long as Covid-19 stays with us," said Mr Supant.

"We need to deal with the situation with strong preventive measures and strict compliance. We cannot drop our guard."

SET-listed oil trader Susco Plc is among the companies that have braced themselves for another tough situation if a Covid-19 outbreak, which earlier dampened domestic fuel consumption, erupted as the result of the reopening of the country.

Chairit Simaroj, managing director of Susco Plc, said the company is ready to cope with a new round of outbreaks because it had learned how to operate the business during the first three outbreaks.

Thailand was first hit by the pandemic in early 2020, causing the government to impose harsh lockdown measures, including strict travel restrictions and a night-time curfew, to curb the spread of the highly contagious virus.

The second outbreak, which flared up in mid-December last year, did not cause the government to enforce a nationwide lockdown, but the new round of travel restrictions affected the energy sector.

Fuel consumption in Thailand contracted by 12.5% last year because of strict state measures to prevent the spread of Covid-19, according to the Department of Energy Business.

Jet fuel consumption had the steepest decline last year with a 62.3% contraction for an average consumption of 7.3 million litres per day, while compressed natural gas contracted by 28.3% to 3,900 tonnes per day.

The decline in fuel consumption mostly took place from April to May when land and air transport was restricted.

The third outbreak, which started in Bangkok pubs in early April, plunged a number of provinces into a lockdown period, dealing a blow to the energy sector again.

"We've done what we had to do since last year, ranging from reducing operation costs, vaccinating staff and implementing preventive measures," said Mr Chairit.

"If an outbreak recurs, we believe it will not be beyond our capability to cope with it."

He said all employees of his firm were already vaccinated, so if someone were infected with the virus, they would not develop severe symptoms.

But the impact from lockdown measures cannot be easily avoided.