Myanmar jade traders are running from junta troops and dodging rebel attacks to sell dwindling volumes of the green gemstone, as the billion-dollar industry loses its shine months on from the coup.

The Southeast Asian country has been mired in chaos since the February putsch, with the military trying to crush widespread democracy protests and the economy in crisis.

Fighting around the Hpakant jade mine in northern Kachin state -- the largest in the world -- has squeezed digging already hampered by the pandemic, cutting supplies of one of the country's most lucrative exports.

Myanmar is the world's biggest source of jade, with the industry largely driven by insatiable demand for the translucent gem from neighbouring China.

Most stones pass through the second city of Mandalay, home to the 23-metre high Kyauksein Pagoda, a Buddhist shrine built using thousands of kilogrammes of the precious stone.

Now the complex is quiet, with just a handful of worshippers praying at its gleaming turquoise and red dome.

"Business is not good at all," said one jade trader, who spent months trying to sell his stones on Mandalay's roadsides as the pandemic and unrest closed its main jade market.

"Sometimes, people panic when soldiers come patrolling, and they run ... If one person runs, others start running. Then soldiers fire warning shots to control the situation."

'Your lives are in danger'

Two days later the market re-opened and authorities began collecting fees again -- one of the many levied on the gem that finance both sides of a decades-long civil war between armed ethnic groups and the military.

It is "nearly impossible" to purchase Myanmar jade without providing money to the military and its allies, according to watchdog Global Witness.

With widespread and often violent resistance against the generals -- who regularly appear in public sporting rings set with high-quality jade -- working with the stone has taken on a new danger.

"If you continue doing your trading business... We strongly warn that your lives are in danger," read one notice posted by Generation Z Power, a local dissident group, days before the market re-opened.

A bomb exploded near the market a week after the traders returned and while there were no casualties the same group promised to set off more if people continue trading there.

Despite the threats, the market is regaining some of its former bustle.

Sitting at a small camp table examining a fist-sized rock with a flashlight, one man talks into a smartphone in Mandarin. 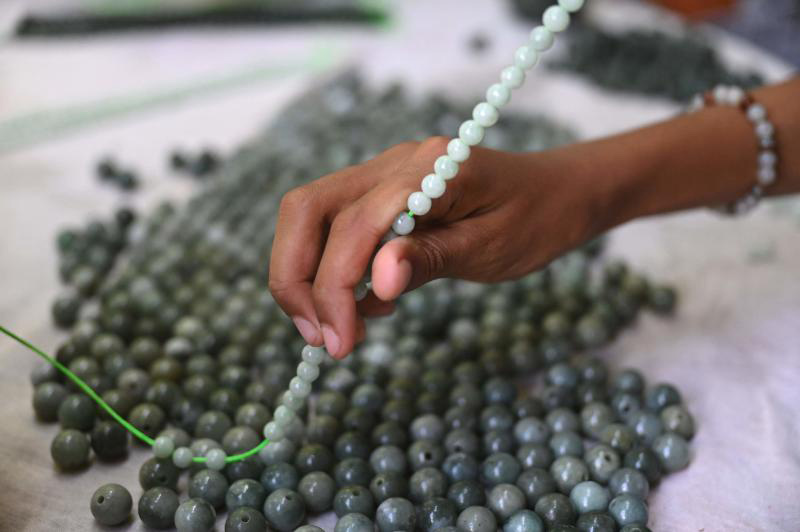 Myanmar jade traders are running from junta troops and dodging rebel attacks to sell dwindling volumes of the green gemstone, as the billion-dollar industry loses its shine months on from the coup. (AFP photo)

Beijing has shuttered its border with Myanmar because of the pandemic and sporadic fighting along the frontier, but demand is still huge -- and Chinese buyers are using the unrest to drive a hard bargain.

"Because of Covid and the political situation, they are giving very low price," said one 62-year-old dealer who did not want to give his name.

"But we have no choice. We need them for the market. If they do not buy or if we do not sell, we have no place to rely on for this business," he added.

Fear of next blast

"The price is going down," said Myo Min Zaw, who also spent his months outside the market traipsing around hotels frequented by Chinese buyers in search of a sale.

Before the coup, 70 to 90% of all jade mined in Hpakant was smuggled to China without ever entering the formal system in Myanmar, according to Global Witness.

Since the putsch, and with fighting flaring around the mines, figures from the shadowy world are even harder to come by, says Hanna Hindstrom, senior campaigner for Myanmar at the group.

"We've heard that prices in China have risen as demand is high and supply reduced," she said -- increasing competition between the rebel groups and military-aligned militia who stock the emporiums with high-quality jade.

For Thandar, who runs a small jade bead workshop across the river from Mandalay, selling her modest wares to local customers has just got more dangerous.

"We worry if we have to go to the market," she told AFP.

"We all are afraid of when the blast will come... We cannot avoid going there because of our living."

The same day authorities announced that any shop in the complex that failed to re-open by November 5 would be "temporarily seized".

"We are stuck in the middle," said Aung Aung, using a pseudonym.

"The market said they will take the shops if owners do not open. People's Defence Forces have asked us not to do business in the market."