Thailand's internet economy is expected to be worth US$30 billion (around 984 billion baht) in 2021, up 51% year-on-year, buoyed by a surge in e-commerce, according to the latest e-Conomy SEA 2021 report.

The study forecasts Thailand's internet economy will hit $57 billion in gross merchandise value by 2025 with a compound annual growth rate of 17% between 2021 and 2025. The report last year forecast the country's internet economy would reach only $53 billion by 2025.

The biggest contributor to the country's internet economy in 2021 has been e-commerce with $21 billion, followed by online media at $4.5 billion, online travel at $2.8 billion and transport and food at $2 billion.

"A sizeable surge in e-commerce makes up for a delayed recovery in travel," the report said.

According to the report, there were 9 million new digital consumers in Thailand from the start of the pandemic in 2020 up to the first half of this year. Some 67% of them live in non-metro areas.

Consumption penetration is the second highest in the region, with 90% of internet users consuming digital services, it said. 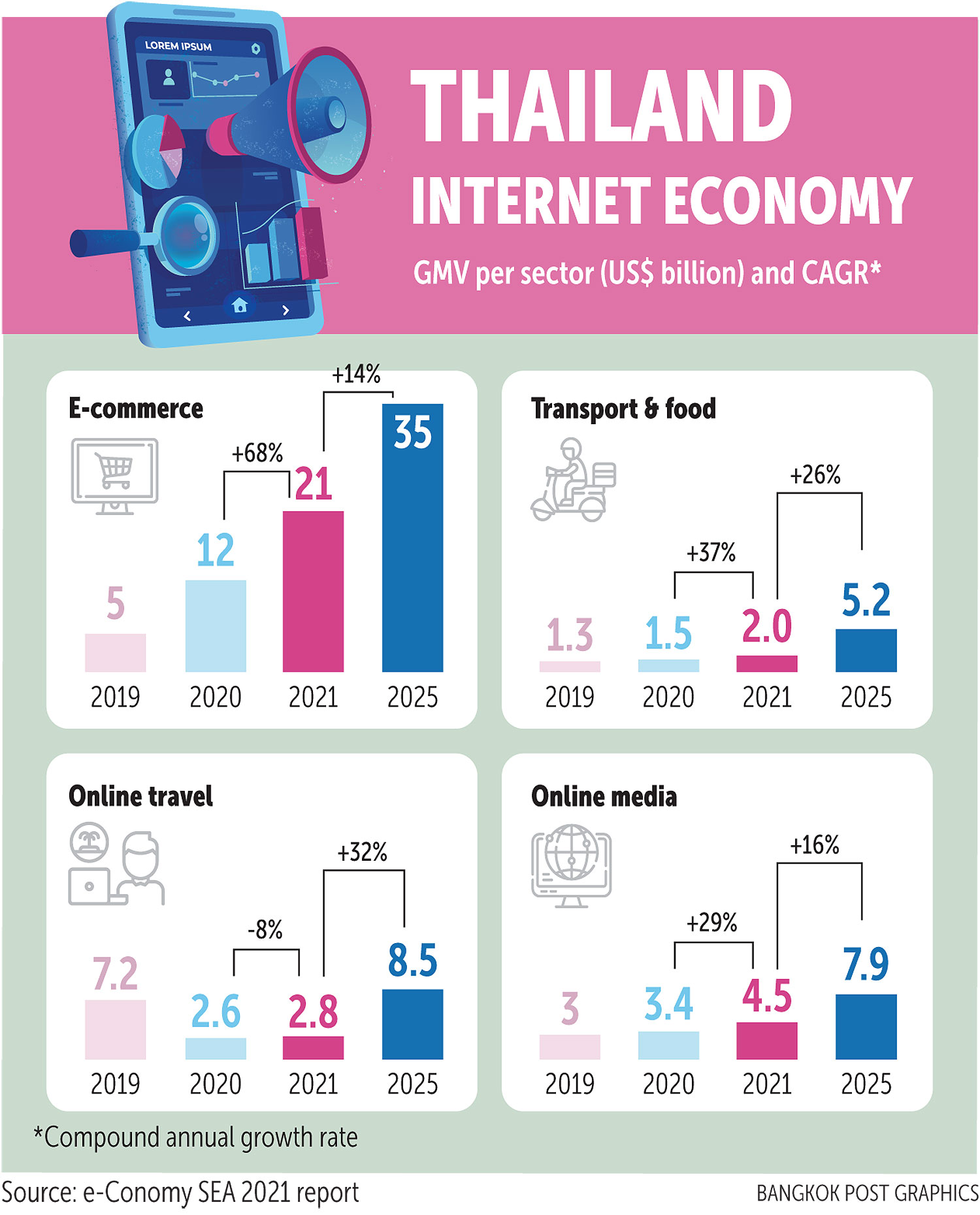 These users are here to stay, given 96% of pandemic consumers are still using the services and going forward 98% intend to continue.

According to the report, pre-pandemic digital service consumers have consumed an average of 3.9 more services since the pandemic began.

Another key finding for Thailand is that 34% of digital merchants agreed that they would not have survived the pandemic if not for digital platforms.

Digital merchants use an average of two digital platforms, while profitability remains a top concern for them.

About 52% of merchants surveyed said they would increase their usage of digital lending services over the next 1-2 years while 22% indicated they would maintain the same usage.

Some 58% expect to increase their usage of digital marketing tools in the next five years.

In terms of investment in the country over the first half of 2021, 59 deals were reached worth a total of $200 million, versus 45 deals worth $199 million in the same period last year.

"Despite market uncertainty, global capital continues to pour into the country given its strong growth fundamentals," the report read. "With the emergence of Thailand's first unicorns, investment appetite remains strong in digital services that surged as a result of Covid-19, including e-commerce, fintech, healthtech and edtech."