Representations of cryptocurrencies Bitcoin, Ethereum, DogeCoin, Ripple and Litecoin on a PC motherboard in an illustration taken on June 29. REUTERS

The rapid development of the digital world does not only make life easier for people to communicate, work and run a business, but also opens the door to a new investment frontier -- digital assets.

The world has encountered a variety of buzzwords over recent years, such as cryptocurrency, non-fungible token (NFT), decentralised finance (DeFi) and metaverse, as the digital world has been getting into full swing.

A number of major companies are getting involved in digital assets in various ways, such as investing in digital asset exchanges, rolling out digital coins and holding cryptocurrencies in the hope of future gains.

Many individuals are also excited by the skyrocketing prices of major cryptocurrencies, such as Bitcoin and Ethereum, and have started to invest in them.

No one knows to what extent this digital world could expand to but it is becoming clear that the line between the physical and digital space is becoming increasingly blurry over time.

Since no one is able to turn back the clock, digital assets are expected to be increasingly important to support various activities in the digital sphere for years to come. 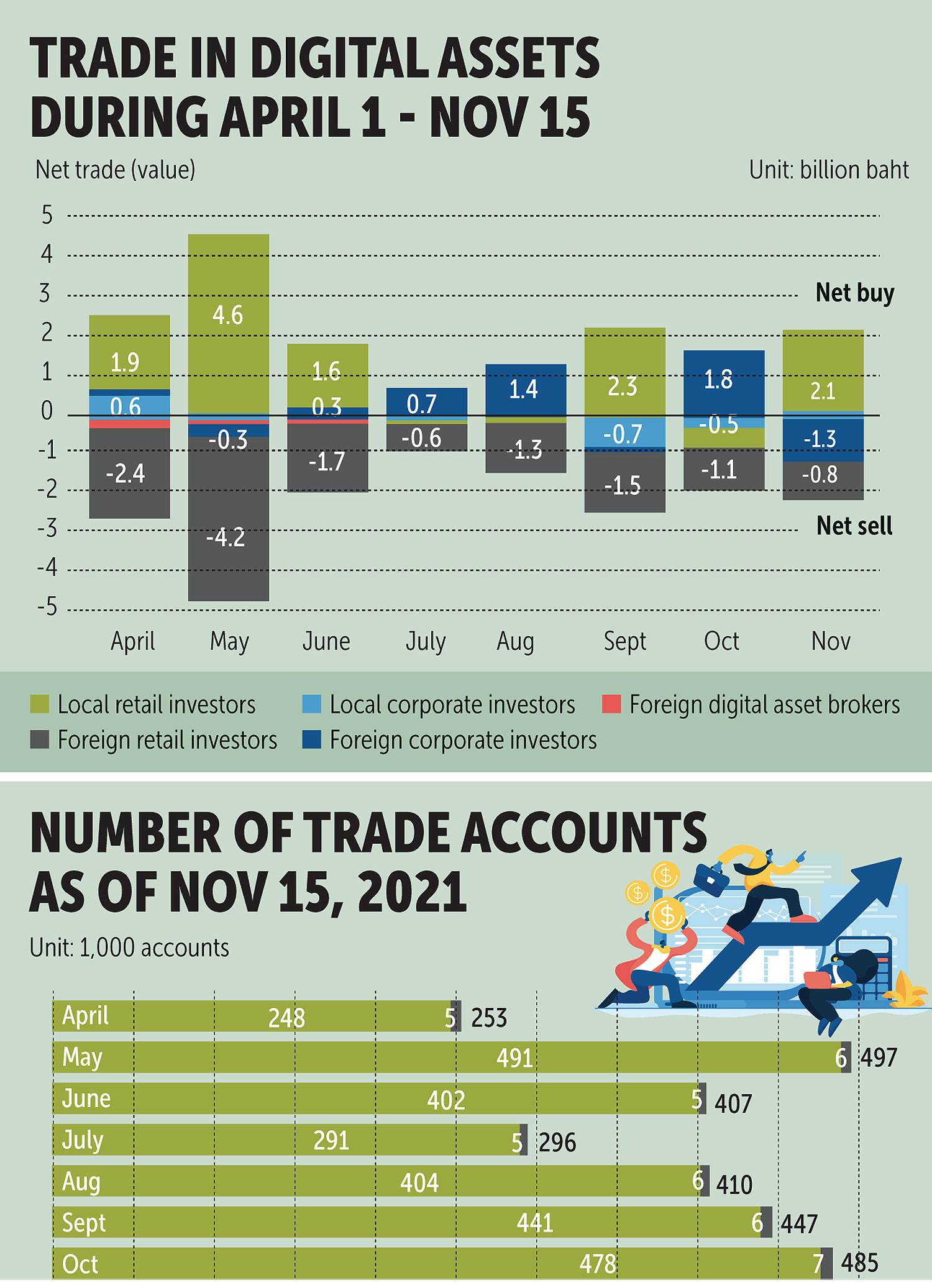 With the entry of various shining digital assets, the traditional capital markets feel the need to digitalise and revitalise their product offerings to attract young investors but are also certain they will remain the main sources of fundraising with their decades-long influence and role in the investment market.

According to Monsak Socharoentum, vice-president of the government data solutions and collateralized debt obligation at Digital Government Agency (DGA), the global stock markets still manage to maintain their popularity among Gen X or Gen Y investors as the main sources of fundraising for many major technology companies, including Facebook, Google, Apple and Microsoft.

The long-established stability and trust between the stock markets and investors have cemented the traditional markets' role as the main sources for funding even in the increasingly digitalised world.

Pakorn Peetathawatchai president of the Stock Exchange of Thailand (SET), said the SET has also studied the feasibility of listing asset-backed digital token products on the bourse but he still believes that the capital markets will remain the main source of fundraising for companies and be able to maintain their integral role in driving the world economy for a long time.

Crypto experts state that NFT has a bright future and the metaverse -- the shared virtual environments which people can access via the internet -- will connect and transform the real and virtual worlds and create huge added value for the economy in the future.

Jirayut Srupsrisopa, founder and chief executive of Bitkub Capital Group Holdings, said the market value of digital assets or cryptocurrencies has now edged near $3 trillion and people around the world as well as Thai traders are actively investing in cryptocurrencies and participating in the market.

He said NFT will change the world of investment over the next 10 years as it will be linked to the metaverse which will serve as a key infrastructure.

Moreover, digital currencies will become a mainstream form of payment for goods and services in the future as people will be able to make transactions not only through smartphones but also other smart devices such as watches and glasses as payment technologies improve, said Mr Jirayut.

He said the increasing importance of digital currency can be exemplified in the Bank of Thailand's plan to issue a central bank digital currency (CBDC), which is expected to be tested and used with commercial banks next year.

Poramin Insom, the founder and director of Satang Pro, said cryptocurrency prices will continue to rise if no unexpected events occur, but investors should invest cautiously, while NFT is still at the nascent stage with many opportunities for development and growth.

Akalarp Yimwilai, chief executive and co-founder of Zipmex Thailand, said cryptocurrency has increasingly been embraced by both domestic and international institutional investors.

He is not certain the Bitcoin price will continue to make gains and hit $100,000 from its current value of around $60,000 but believes that anything is possible.

However, if the price continues to surge and everyone has made profits, investors need to be careful as there may be a correction.

As for NFT, he believes the asset will become useful in daily activities such as gaming, especially now that it has been applied to Facebook's metaverse.

"NFT and GameFi will play a bigger role in the next 1-2 years, and they will also be part of the metaverse. Although it is still in its infancy, I believe that NFT will go a long way," said Mr Akalarp.

Various global tech giants are paying more interest to metaverse, which could potentially bring people into digital space in an immersive experience.

Metaverse made headlines late October when Facebook announced its vision to drive towards this virtual environment technology while changing its parent company name to "Meta" to reflect this objective.

Various digital platforms are now providing a glimpse of metaverse, including virtual space where users in avatar can meet friends from around the world, produce and exchange digital items and even buy and sell virtual land plots for future development.

A Plus Fintech, a financial tech firm headquartered in Singapore, has developed a platform called Metaverse Thailand, where users can buy virtual land based on the map of Bangkok.

The first phase of virtual land plots in the Sukhumvit area are now fully sold out. Metaverse Thailand enables users to buy, sell, name and develop the land they own.

Sathapon Patanakuha, chief executive of SmartContract Blockchain Studio, a local consulting service provider for blockchain technology, pointed out that virtual land and virtual objects, such as NFT, are interesting for investment.

The projects, if well managed, could deliver high investment returns that are multiple times the original value.

Metaverse Thailand shows virtual land plots around the Ekamai area that have been purchased (in green).

Before making such an investment, interested parties should thoroughly research the project's partners, other investors in the project, along with their user community.

After making an investment, buyers also need to keep tabs on the progress of the projects and their returns.

If the projects are still under development, investors should carefully consider the prospect of their use cases, objectives, roadmaps and the potential for development, he said.

Mr Sathapon pointed out that the current investment in digital assets has still had no impact on the stock market, noting that the market cap of digital assets is still not substantial.

In 2020, the market cap of cryptocurrencies globally was US$2 trillion while that of the global stock markets stood at $89 trillion.

"The investment in cryptocurrencies, DeFi and NFT remains small and it has no significant impact on the stock markets or other assets," Mr Sathapon said.

"On the contrary, the profit from crypto investment could be reinvested in the stock and gold markets much more."

Blockchain, cryptocurrencies, digital assets, NFT and metaverse technologies are accelerating the growth of the new economy, which connects people around the world without borders, he said.

"This is a big turning point for the world economy, which delivers a great opportunity for business operators, programmers, creators and investors," said Mr Sathapon. "This brings in an important opportunity for Thailand where policies must be ironed out to create competitive advantages and new growth engines for the economy."

According to him, major corporations in Thailand, such as banks, financial institutions and listed companies, are pivoting towards these new digital assets, including providing related services and even making investments.

He said Thailand should now have "a virtual special economic zone" with the support of digital infrastructure conducive to decentralised technology and the trial of new innovations.

The government should iron out tax incentive policies which will accommodate tech operators and global investors so as to create new business and revenue, said Mr Sathapon. 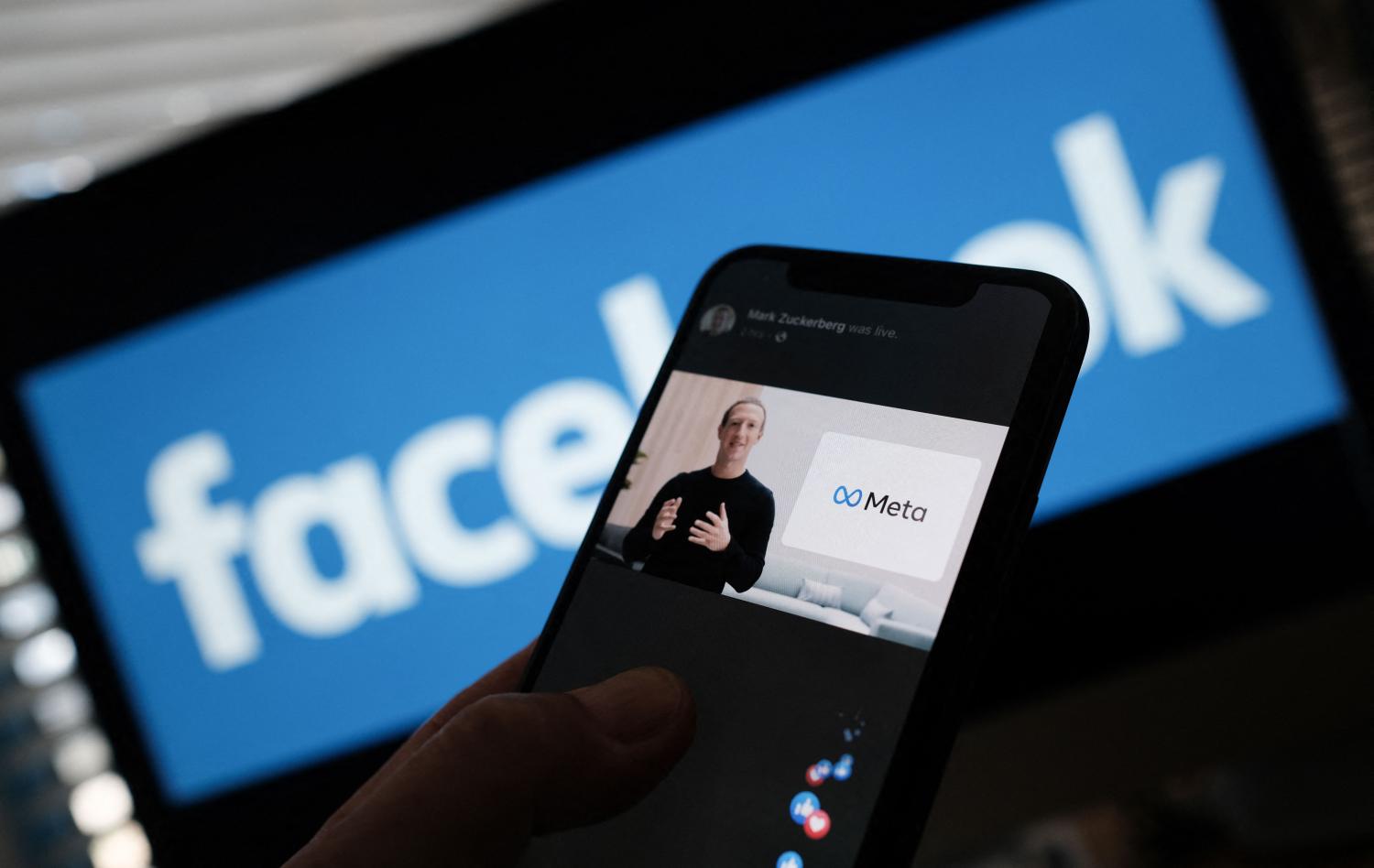 In a photo taken in Los Angeles on Oct 28, a person views Facebook chief executive Mark Zuckerberg unveil the 'Meta' logo on a smartphone. AFP

Pochara Arayakarnkul, chief executive of Bluebik Group Plc, a digital transformation consulting firm, said digital assets have gained a higher level of confidence in Thailand, mainly attributed to the large companies or venture capital groups that have invested in digital infrastructure which can accommodate the growth of decentralised finance (DeFi).

Commercial banks are among the most aggressive players on the supply side as they are currently focusing on building the ecosystem for digital assets, such as offering an initial coin offering (ICO) portal, NFT market place, or even acquiring stakes in local digital asset exchanges.

On the demand side, growth is more likely to be driven by retail investors than institutional investors.

"Despite higher yields than traditional investment, institutional investors remain reluctant to diversify their portfolios to digital assets because of their already high value, while the value of some digital asset classes may not seem to make sense to them," said Mr Pochara.

The flow of capital driven by individual investors could also be seen in more mature markets overseas as institutional investors in the West are just in the early stage of exposure to the new digital opportunities.

"There are a number of hedge funds targeting DeFi products or public companies that are quite extreme in digital asset investments, such as MicroStrategy, but that portion is still limited when compared to other investment which can guarantee them with more reliable valuation methods, such as stock markets in which we can examine a firm's value through the price-to-earnings [P/E] ratio," he said.

Mr Pochara said institutional investors in Thailand might take more than 1-2 years to follow, but they should start learning about digital assets right away to avoid losing opportunity cost as DeFi will continue to attract more capital flows in the long run.

Mr Pochara said that individuals who previously sought high yields might become more sophisticated investors who get to know the mechanisms of DeFi and become ready to jump into these new kind of investments as the development of DeFi products is diverse, offering them plenty of investment choices, such as cryptocurrency, NFTs, yield farming or GameFi, through which players are able to earn from playing digital games.