The new company that will be formed through the merger of True Corporation Plc and Total Access Communication (DTAC) Plc will have a 33.1% stake equally held by Charoen Pokphand (CP) Group and Norway's Telenor, according to an analyst with knowledge of the deal.

A 10.1% stake will be held by China Mobile and the rest by individual shareholders.

CP and Telenor are the parent firms of True and DTAC, respectively. CP and Telenor announced on Monday they would enter into an equal partnership to explore ways to establish a new tech company through amalgamation of the two subsidiaries.

The source, who requested anonymity, pointed out the ratio of the 33.1% stake held equally by CP and DTAC is the same pattern seen in the merged unit in Malaysia formed by Telenor and Malaysian telecom firm Axiata Group Bhd in June.

Meanwhile, the merged company will be almost three times the size of the merged firm in Malaysia, according to an investor call held recently by Telenor.

Speaking at the event, Tone Hegland Bachke, chief financial officer of Telenor, said the sponsoring shareholders will target ownership of around one-third each in the combined company.

According to her, the proposed merger will create a company with around 55 million customers and pro forma 2020 revenue of US$6.9 billion. 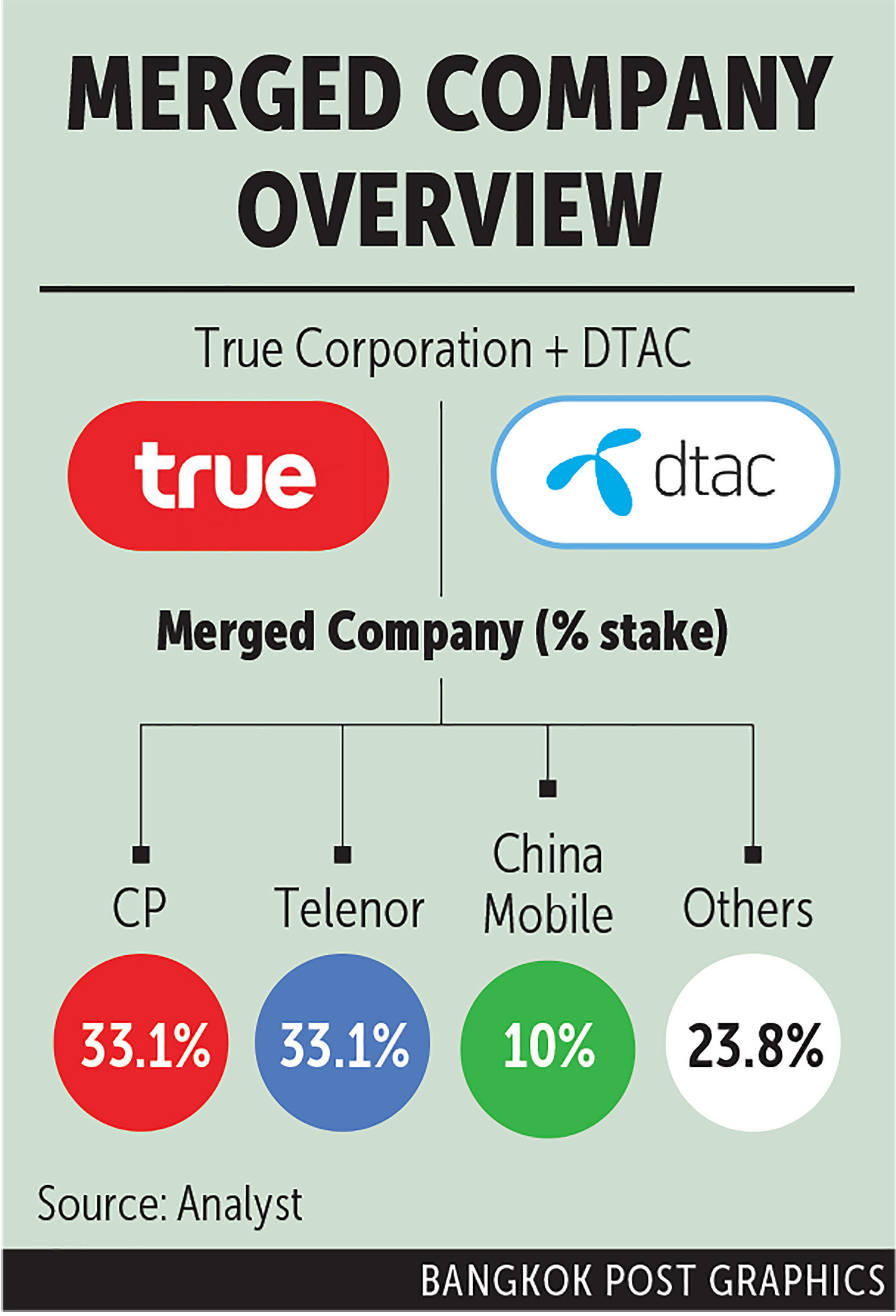 She said based on the third quarter of 2021, the combined entity will have a revenue market share around 40%, comparable to the current market leader, Advanced Info Service (AIS).

"It's too early to provide concrete synergy numbers. However, if we draw some parallels to the transaction we're working on in Malaysia on some parameters, the merged company in the Thai market will be almost three times the size of the Malaysian company," Ms Bachke said.

The outcome of the tender offer will determine the final equalised ownership between Telenor and CP, she said.

"Based on this ownership, we expect that the reasonable cash outlay for Telenor could be in the area of $300-500 million," said Ms Bachke.

According to a source at the National Broadcasting and Telecommunication Commission (NBTC), it is likely that the new merged firm will unify the duo's mobile business into a single brand while this combined firm will be listed on the Stock Exchange of Thailand via a back-door listing through either True or DTAC.

Meanwhile, Trairat Viriyasirikul, acting secretary-general of the NBTC, said the agency has been informed by True and DTAC that they are exploring appropriate ways to merge.

The process will start with due diligence early next year and both will have to follow through on legal steps required by law, he said.

The two pledged to continue to update the NBTC office with the merger's development, he said.

The two will be asked to explain the reason for the merger and need to give details and timeline of the process as well as possible impacts and remedies for consumers and related parties from such impacts.

A telecom source who requested anonymity said the merger deal does not only face challenges in terms of criticism of market dominance from consumer protection groups and academics, but also how the merged entity would create more value.

CP and DTAC have significant differences in terms of management, decision making, operation and connections, the source added.

The WhiteSpace (WSP), a mobile virtual network operator (MVNO) under the Penguin brand, is shifting its business to a partnership in an enterprise private network, used car sales and debt collection services in order to ensure long-term revenue streams.