Thailand’s first sovereign sustainability bond is a significant step forward for the Kingdom in its journey to become greener and more socially inclusive. With an on-the-ground presence in Thailand spanning over 127 years, Standard Chartered is proud to be part of this breakthrough issuance.

When in October 2018, the Government of Thailand rolled out its 20-year plan, the National Strategy 2018–2037, commentators at home and abroad lauded its vision to transform the country into a thriving, developed nation within decades.

Among six strategies outlined in the plan, two were especially noteworthy. The National Strategy on Social Cohesion and Equity works towards the eradication of income inequality, spurring human capital development, and promoting gender equality and women’s roles in social development. Meanwhile, the National Strategy on Eco-Friendly Development and Growth seeks to reduce greenhouse gas emissions, encourage sustainable consumption and production, and help the nation adapt to the challenges of climate change.

Both strategies underscore the nation’s commitment to the United Nations Sustainable Development Goals (SDGs). Furthermore, they reaffirm the country’s pledge to the Paris Agreement which Thailand signed in 2016, by pledging that Thailand will pursue the net-zero carbon emission goal and achieve carbon neutrality by 2065.

On a positive trajectory

Key to realising this vision is financial support from the Government of Thailand. Primarily tasked with meeting the Kingdom’s financial obligations and ensuring long-term fiscal sustainability, Thailand’s Public Debt Management Office (PDMO) is a critical entity in helping to execute its national strategy.

Of note, PDMO helped craft Thailand’s Sustainable Financing Framework. Projects financed by the scheme target climate change mitigation and adaptation, sustainable use and protection of water resources, and preservation and restoration of biodiversity and ecosystems. They also foster social development, socio-economic advancement and empowerment – helping to ensure social harmony and to eradicate an array of inequalities.

The establishment of the Sustainable Financing Framework could not be better timed. In the lead-up to 2020, interest in both green and social bonds gained traction, with more than 10 companies reportedly planning to issue during the year. Several such issuances took place in 2019. PDMO was also planning to issue the country’s first sovereign sustainability bond during 2020 to finance the MRT Orange Line project in Bangkok. The MRT Orange Line is a transit system that is scheduled for launch in 2024; it is expected to transport 500,000 passengers per day by 2028.

Then in March 2020, COVID-19 struck. A national lockdown was swiftly imposed; the country’s borders closed and domestic travel became restricted. All but essential businesses were forced to suspend their activities. Economic growth paused, small businesses struggled, and unemployment rose sharply. Many wondered what could be done to turn the tide and help revive the nation’s positive trajectory during the years prior. 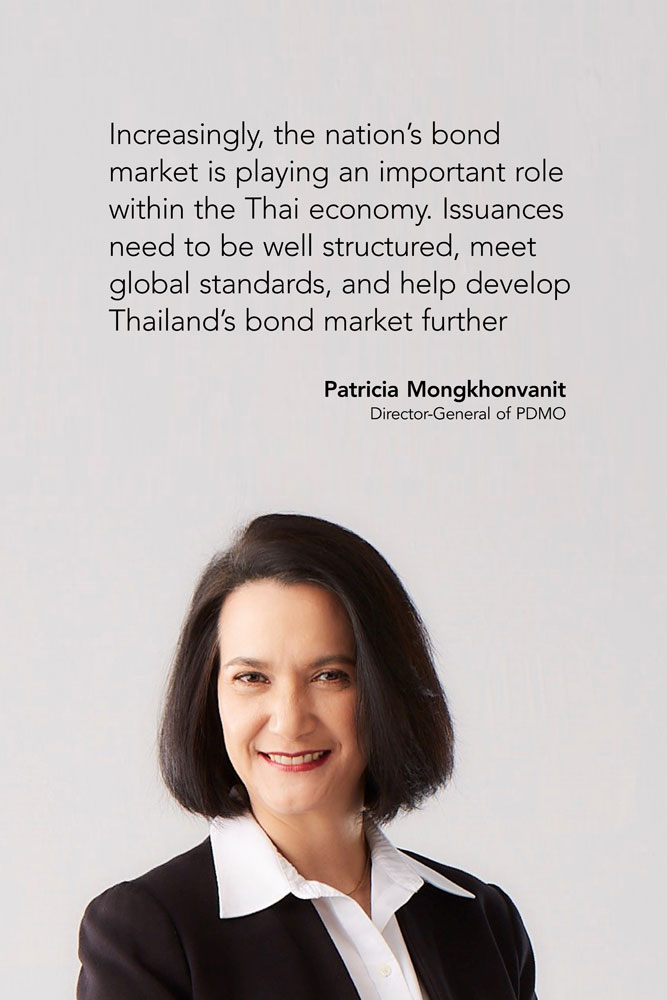 The Government of Thailand quickly took action. Over the ensuing months, it spent about THB1 trillion (USD30.7 billion) bolstering vulnerable households and businesses through a range of support schemes. An additional THB500 billion (USD15.3 billion) was released in early-2021. The Government of Thailand was especially keen to continue financing projects aligned with the SDGs. To fund the MRT Orange Line project and provide financial support to Thai society, the PDMO pushed ahead with the country’s first sovereign sustainability bond.

A THB30 billion (USD920 million) 15-year issuance auctioned in August 2020 would help finance 27 per cent of the mass rapid transit project – the project’s total value is THB113 billion (USD3.5 billion) – while an additional THB20 billion (USD610 million) 15-year issuance in November was designed to help finance COVID-19 support measures through the “Rao Mai Ting Gun” (“No One is Left Behind”) scheme. Under this initiative, money was dispersed directly to citizens, including temporary workers, contract employees and self-employed persons.

Standard Chartered Thailand acted as joint structuring advisor and joint lead manager for the dual tranche issuance. “The Kingdom’s debut sustainability bond supports the PDMO’s objectives of ensuring long-term fiscal stability, and providing the tools to raise capital for environmental and social initiatives,” explains Patricia Mongkhonvanit, Director-General of PDMO. On the social front, she says the Government of Thailand’s measures are actively assisting tens of millions of citizens. “This issuance will not only increase sustainability bond supply to attract more investors, it should also inspire private sector issuers to follow suit.”

Standard Chartered’s assistance was instrumental in the deal’s success. While the tranches looked attractive on paper – Thailand’s credit rating was appealing, its fiscal position was strong, and interest rates were low – several markets were experiencing lockdowns during August and November 2020. As a result, many investment professionals worked remotely, often without access to tools and sources of information they would typically rely on. Bonds are generally traded over-the-counter via telephone, as opposed to being bought and sold online. Moreover, global demand for government-linked bonds had waned, due to record low yields forced downwards by the pandemic-led economic crash.

“Increasingly, the nation’s bond market is playing an important role within the Thai economy, especially since the Asian financial crisis in 1997,” says Patricia Mongkhonvanit. “Issuances need to be well structured, meet global standards, and help develop Thailand’s bond market further.” Standard Chartered’s international expertise proved to be a core strength during the issuance process, as too did its focused mindset to work collaboratively with different stakeholders. These attributes contributed to the success of both tranches. 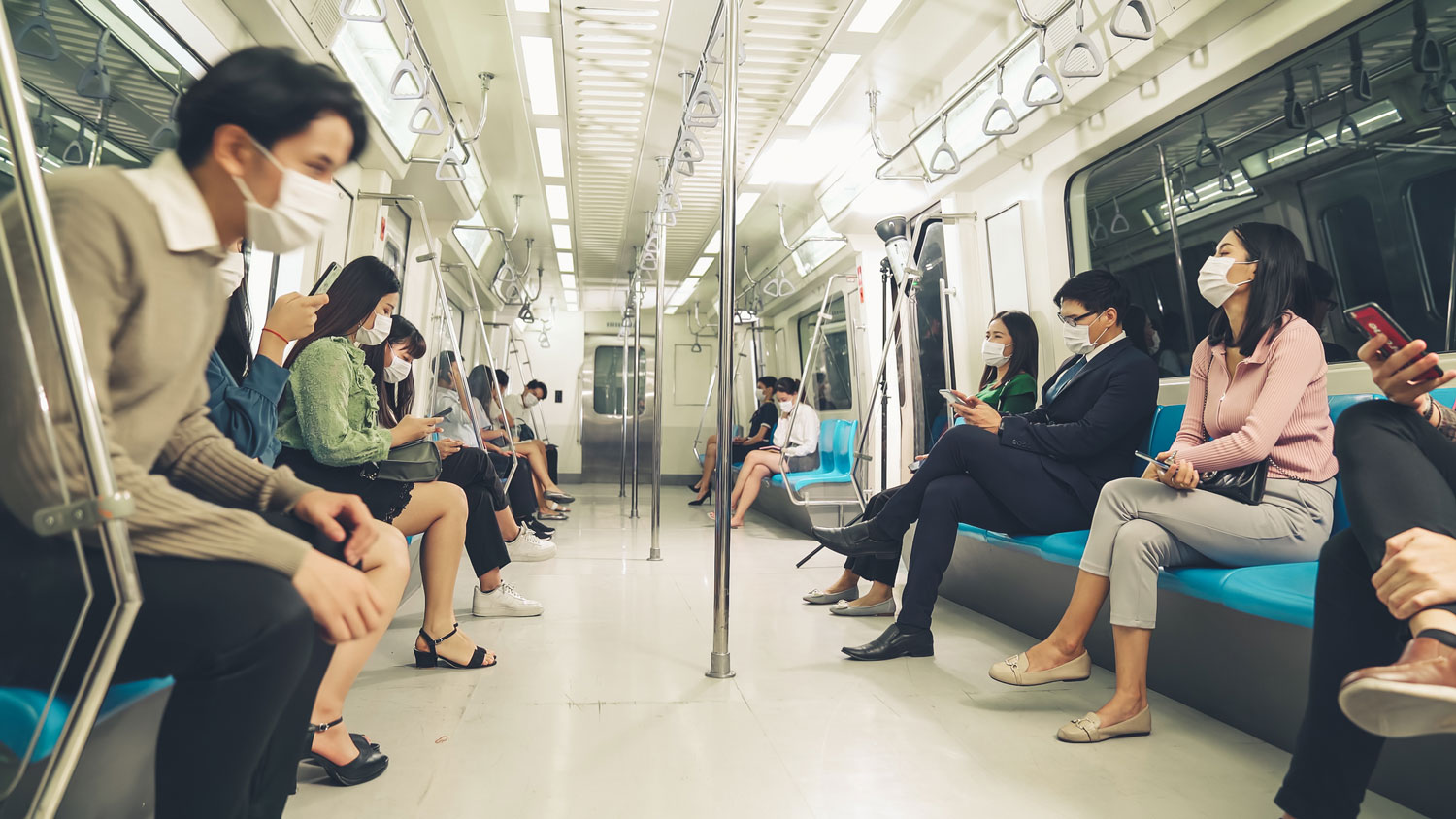 The bond was listed on the Luxembourg Green Exchange, and bidding for the THB20 billion (USD610 million) tranche was more than three times over the issuing amount, closing at THB60.9 billion (USD1.9 billion). Demand for Thai bonds has since surged, with purchases of long-term issuances in particular proving popular among local and overseas investors. The total value of outstanding bonds held by overseas investors stood at THB875 billion (USD26 billion) in June 2021, with THB800 billion (USD23.7 billion) of these holding a long-term maturity.

“The Kingdom of Thailand’s first sustainable bond signifies the nation’s deep commitment to tackling environmental and social issues as well as the myriad of economic challenges brought about by COVID-19. It also confirms that there is high investor demand for sustainability bonds issued by the Kingdom, paving the way for more successful issuances from this market,” says Plakorn Wanglee, President and CEO of Standard Chartered Thailand. “Standard Chartered’s bond structuring expertise and extensive network is helping both public and private sector entities to raise the necessary funds to build a cleaner and more prosperous Thailand – for today and tomorrow’s generations.”