The Bank of Thailand has cut its forecast for foreign tourist arrivals in 2022 because of the impact of the Omicron variant and government measures to restore mandatory quarantine for visitors entering the country from overseas.

The Monetary Policy Committee (MPC) meeting on Wednesday assessed the Omicron outbreak's impact on the economy in early 2022. The impact could be more severe and prolonged than expected due to downside risks, such as the severity of the outbreak and the strictness of corresponding containment measures, said MPC secretary Piti Disyatat.

The government temporarily suspended the entry of both Thais and foreign arrivals under the "Test & Go" scheme and restored mandatory quarantine in a bid to keep the Omicron coronavirus variant at bay.

Prime Minister Prayut Chan-o-cha said on Tuesday the government would stop approving new applications for Test & Go entry, except for the Phuket sandbox, from Dec 21 until Jan 4. Visitors whose applications were previously approved are allowed to enter Thailand as planned. New arrivals undergo RT-PCR testing and are quarantined for between 7-10 days. 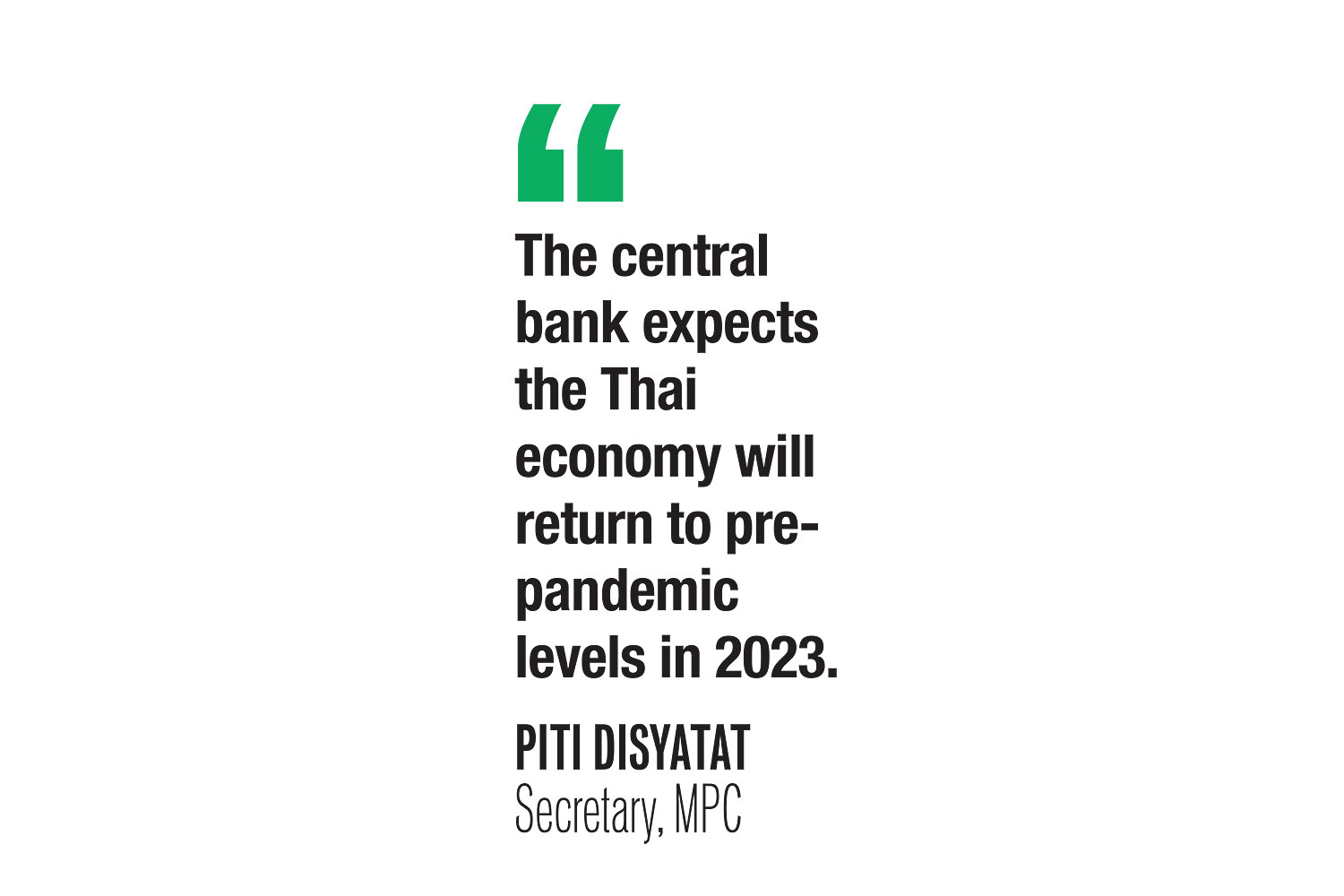 The central bank reduced its foreign tourist arrival outlook for 2022 from 6 million to 5.6 million. This figure is in line with the bank's existing assessment regarding downside risks for tourism amid higher uncertainties for an outbreak, Mr Piti said.

If the government implements containment measures in the second half, this would have a greater impact on visitors from abroad, he said.

The spread of the Omicron variant is the key risk factor for the economic outlook, said the MPC.

The committee revealed it upgraded Thailand's GDP growth rate for 2021 from 0.7% to 0.9%, in line with data confirming a recovery trend.

The MPC cut the GDP growth outlook for 2022 to 3.4% from 3.9% and projected a growth rate of 4.7% for 2023. The recovery trend is driven by domestic spending and a gradual improvement in foreign tourist figures.

A recovery in various business sectors is expected to improve in line with economic activities, said the MPC.

The meeting also voted unanimously to maintain the policy rate at 0.5%.

Mr Piti said the central bank expects the Thai economy will return to pre-pandemic levels in 2023.

However, the labour market needs to be monitored, he said, especially employment and income, which are still below pre-pandemic levels.

Headline inflation increased temporarily because of supply-side factors, particularly energy prices, which were expected to subside in the second half of 2022, said the MPC.

The MPC views government measures and policy coordination among state agencies as critical to support the economic recovery.