The Afterpay app download page is arranged on a smartphone. Big deals this year included Square Inc's move in the summer to purchase buy-now-pay-later company Afterpay Ltd for $29 billion. Blooomberg

Companies are gearing up for another banner year for deal making.

Mergers and acquisitions hit a record in 2021, fueled by low interest rates, a surge in private-equity fundraising and companies' efforts to respond to broader shifts in their industries.

The total value of global M&A transactions through Dec. 21 was $5.7 trillion, up 64% from the same period a year before, according to Refinitiv, a data provider.

Many of the factors that propelled deal making in 2021 are expected to continue into next year, M&A lawyers and advisers said.

But policy changes on the horizon could damp the pace of corporate tie-ups, including interest-rate increases from the Federal Reserve -- which could increase companies' financing costs -- as well as increased scrutiny from antitrust regulators.

It also remains to be seen if new variants of Covid-19, for example Omicron, have an impact on corporate deal making, advisers said.

"We look at the big trends that have continued over the years and say, 'Are they more likely to continue or not?' And our conclusion is that, generally speaking, they are likely to continue going into next year." said David Harding, advisory partner at Bain & Co., a professional services firm.

Throughout the year, companies tapped into cash piles that they amassed early on during the pandemic to pursue M&A.

Cash and equivalents at companies in the S&P 500 increased 11% during the third quarter, to about $3.78 trillion, compared with the prior-year period, according to S&P Global Market Intelligence.

Under the deal, AT&T will receive $43 billion, and AT&T shareholders will own 71% of the new company once the transaction closes.

Square earlier this month renamed itself to Block Inc.

Finance chiefs at acquiring companies have contended with high valuations in deciding whether to commit to a transaction.

Multiples for transactions -- calculated as the ratio of median enterprise value to earnings before interest, taxes, depreciation and amortization -- increased across industries in 2021 compared with the prior year, according to Bain. The technology and healthcare sectors commanded the highest multiples, with 28 times and 24 times, respectively.

It acquired software firm Has-to-be for approximately €250 million, equivalent to around $283 million, in cash and stock, and bought ViriCiti, a fleet-electrification company, for about €75 million.

The company approached the two deals with the intention to be choosy, chief financial officer Rex Jackson said.

"It's going to be expensive because the space is richly valued, so let's make sure we get what we want," Mr. Jackson said, discussing the company's selection of targets. 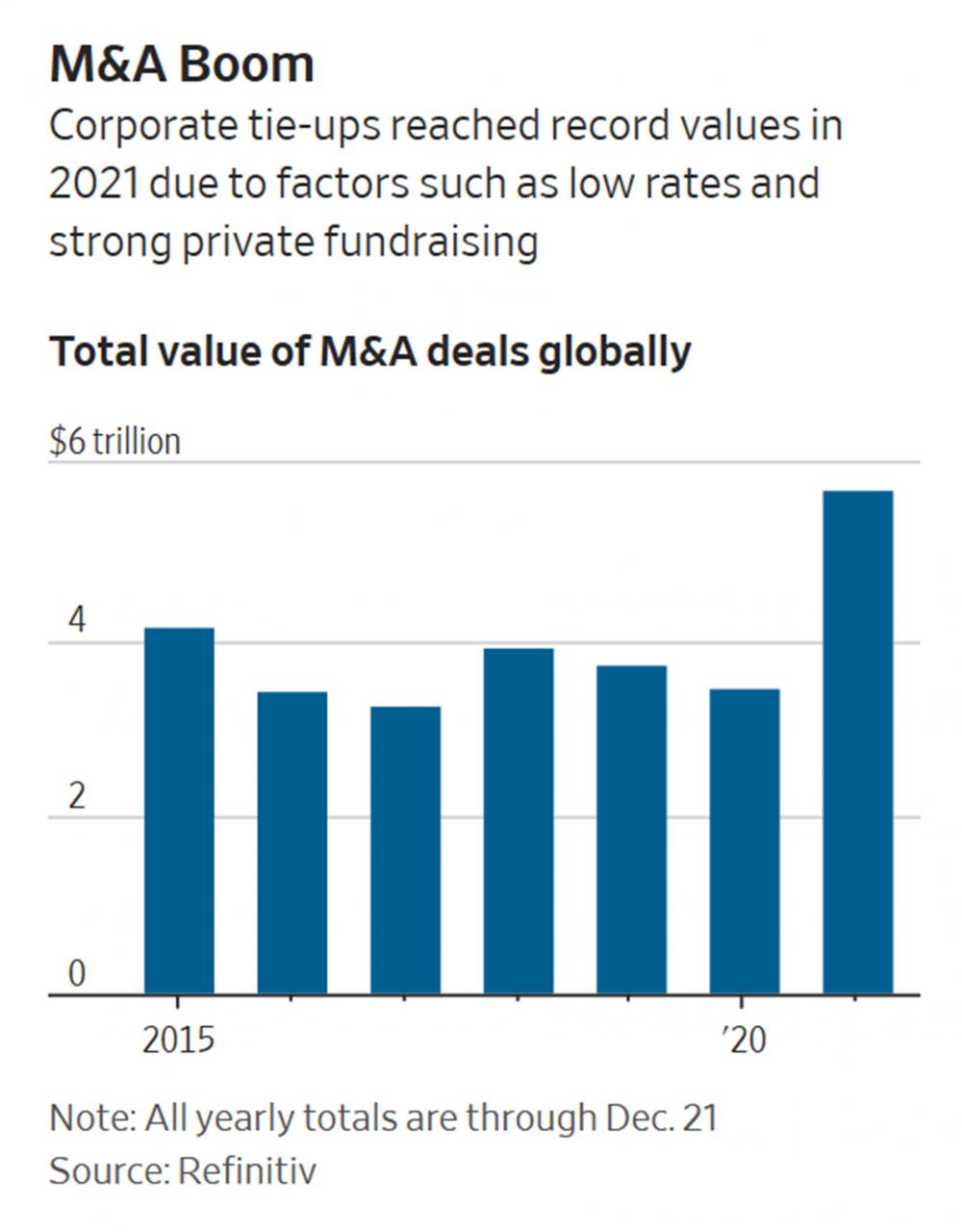 Many companies during the pandemic revisited their portfolios and entered 2021 with a plan to sell business lines or buy companies as a means to expand. For instance, some companies acquired technology firms to improve their digital capabilities, while others scooped up competitors to expand sales.

The deal is meant to help Signet increase sales of what it calls "accessible luxury," according to Joan Hilson, the company's finance chief.

"The market is doing quite well in that tier, and we believe that we have room to take more share there," Ms. Hilson said.

Mergers with special-purpose acquisition companies this year accounted for 11% of transaction values globally through Dec. 8, up from 6% in the full-year 2020, according to Bain's analysis of data from Dealogic, a financial information company.

The surge in investor interest in SPACs this year is expected to spur additional deal making in 2022, since the firms, which are essentially publicly traded pools of cash, typically have a two-year window to make an acquisition.

SPACs can act as a broader stimulus for deal making by prompting firms that might not have been ready to sell to consider transactions, according to Brian Salsberg, global head of the integration practice at professional services firm Ernst & Young.

Private-equity and venture-capital firms also increased their share of total M&A transaction values in 2021 by about two percentage points from 2020, to 19% and 8%, respectively, Bain said.

Companies nonetheless are looking for ways to put the cash they have raised during the pandemic to work, advisers said.

U.S. investment-grade bond sales declined slightly in 2021 from their peak in 2020, when companies built up liquidity to weather the economic shock caused by the pandemic.

Businesses raised $1.4 trillion through Dec. 21 by selling such bonds, down 22% from a year earlier, Refinitiv said.

The continuing surge in private-equity funding will also be a factor in M&A in 2022, particularly in the technology and healthcare sectors, advisers said.

Private-equity and venture-capital firms globally raised about $1 trillion through Dec. 21, up 35% from the end of 2020, according to Refinitiv.

It is too soon to say whether next year will surpass the M&A records set in 2021, but corporate advisers said there appear to be few factors to significantly slow it down.