A credit to the community
Business

A credit to the community

With carbon credit trading getting off the ground in Thailand, the community responsible for Ban Ton Phueng community forest in Tambon Mae Pong, Chiang Mai province, is hoping its efforts to manage carbon emissions will help generate income.

According to Wichai Phengruean, chief of Ban Ton Phueng in Doi Saket district and chairman of Ban Ton Phueng community forest, their land is one of the projects chosen by the Mae Fah Luang Foundation and the Securities and Exchange Commission (SEC) to conserve forests while supporting civil society in producing carbon credits to supply the business sector.

HOPE FOR THE FUTURE

The concept of carbon credit trading stems from the Kyoto Protocol. Carbon credits are earned and traded between various companies and governments. 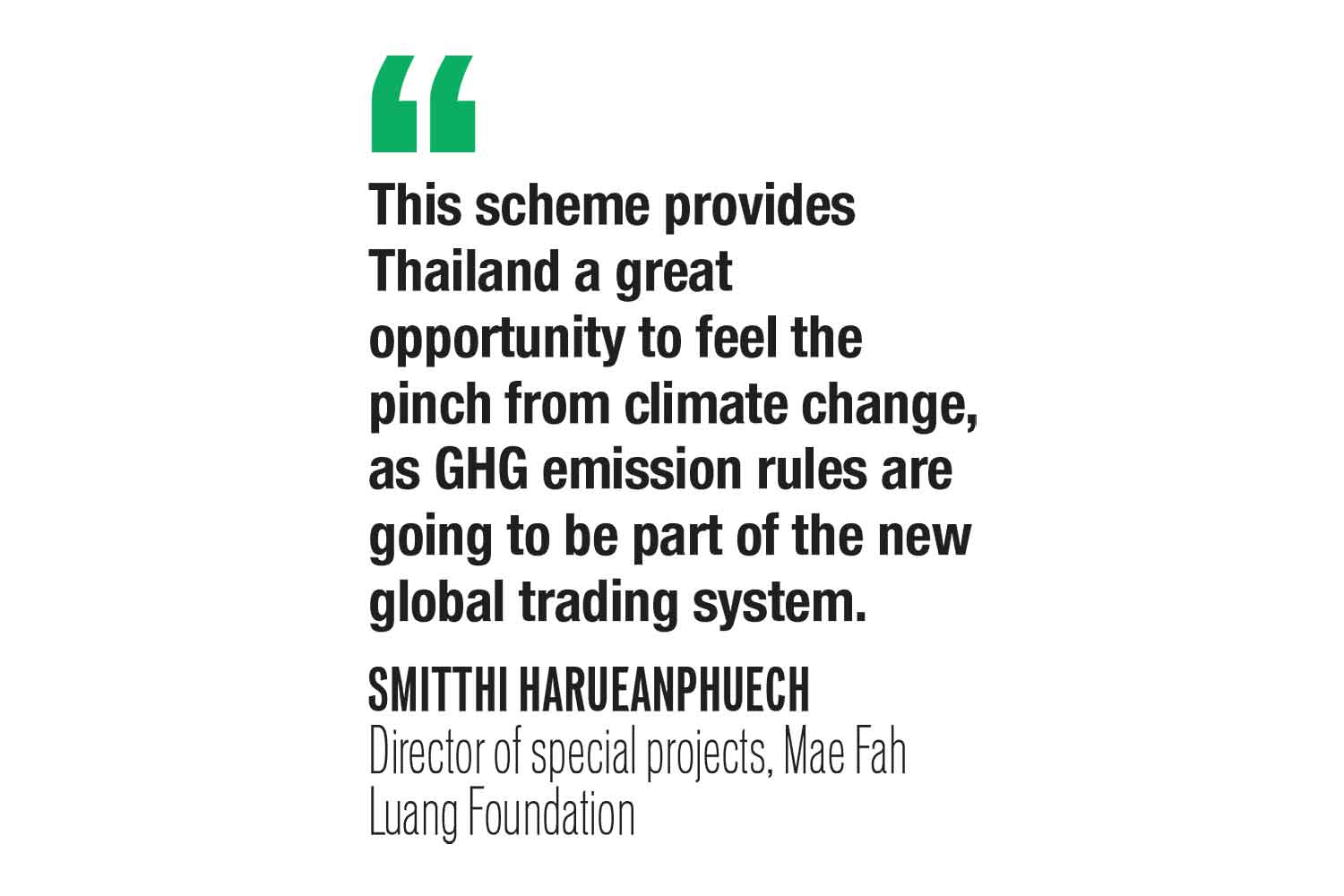 Thailand faces challenges in its "energy-environment-economy" development because of limited energy resources and global climate change.

"After Ban Ton Phueng community forest joined the carbon credit scheme initiated by Mae Fah Luang Foundation and the SEC in 2019, there were no more wildfires on the 984 rai that spans eight villages," said Mr Wichai.

The project helps workers laid off during the pandemic who returned home, providing a daily wage of 200-300 baht, he said.

The Ban Ton Phueng community forest scheme was supported by public companies and SEC members through a total budget of 270,000 baht for three years in the first phase (2019-21).

The budget was allocated mainly to build weirs and fund activities to conserve the forest such as firefighting projects.

The project has attracted villagers to help conserve the forest and prevent wildfires, said Mr Wichai.

Smitthi Harueanphuech, director of special projects at Mae Fah Luang Foundation, said the "You Protect Forests; We Protect You Project", which the foundation implemented together with the SEC and 16 communities in four provinces (Chiang Mai, Chiang Rai, Mae Hong Son and Phayao) covers 19,611 rai and has helped 9,166 locals while greatly reducing the environmental impact.

He estimated carbon credits produced by the 16 community forests are equivalent to 392,220 tonnes of carbon monoxide.

"This scheme provides Thailand a great opportunity to feel the pinch from climate change, as GHG emission rules are going to be part of the new global trading system. Large multinational companies have already established bases in Thailand to conduct carbon credit trade."

He said each community forest that participates in the project has to meet requirements for registration with the Thailand Voluntary Emission Reduction Program (T-VER).

T-VER was launched in 2013 by the Thailand Greenhouse Gas Management Organization as a project-based voluntary scheme to encourage GHG reduction and promote the carbon market in Thailand. Carbon credits can be traded in the domestic carbon market.

Mr Smitthi said the foundation plans to expand the project to cover an additional 32,500 rai in 33 community forests in Chiang Mai, Kamphaeng Phet, Uthai Thani and Krabi in 2022, and another 150,000 rai in 2023.

He said by next year the project aims to cover a total of 300,000 rai of community forests that can produce carbon credits equivalent to 2.8 million tonnes of carbon monoxide.

According to Mr Smitthi, under the Community Forest Act of 2019, private companies that provide a budget for forest conservation can claim a tax deduction on the expense.

"Thailand is moving towards a low-carbon economy with the goal of achieving carbon neutrality by 2065," he said.

"The government is working on a long-term strategy to achieve net-zero emissions, with the energy and transport sectors being the focus of the lower carbon emissions campaign. The commitment is to cut emissions by 20-25% by 2030."