Renewables get a lift in Thailand
Business

Renewables get a lift in Thailand

The country's commitment to carbon neutrality by 2050 will facilitate robust renewables growth. By Fitch Solutions

We believe that Thailand will experience robust growth in non-hydroelectric renewable energy, in line with its declaration at the COP26 climate talks of a goal to become carbon neutral by 2050.

Prime Minister Prayut Chan-o-cha also pledged in Glasgow that the country would reach net-zero greenhouse gas emissions by 2065. These commitments are a step up from what we previously noticed, which called for carbon neutrality by 2065 to 2070 through the National Energy Plan 2022. 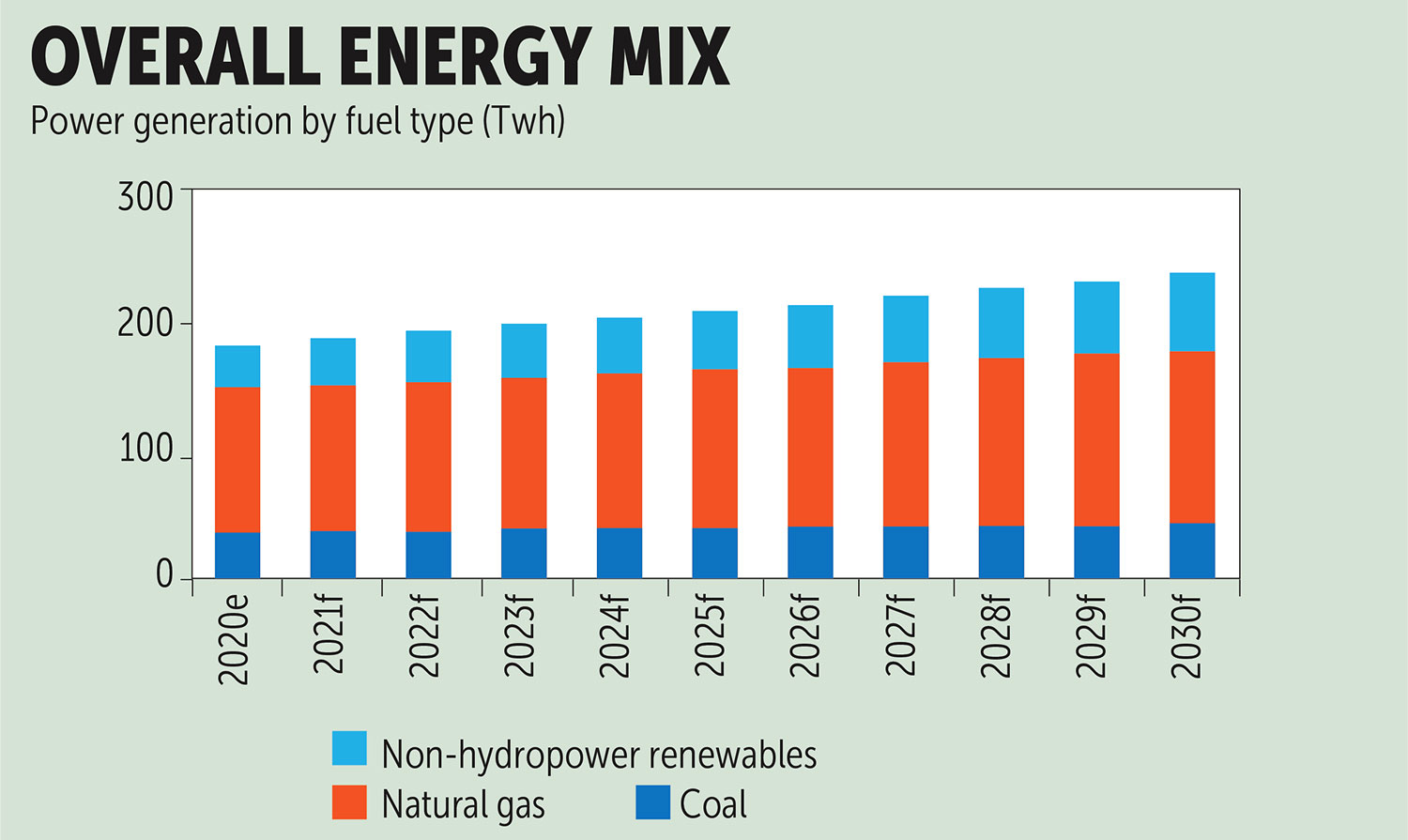 Apart from what was announced at COP26, Thailand has also made plans to develop renewables in the power sector, with a non-hydroelectric renewables target of 18.7 gigawatts of total capacity by 2037 through the Alternative Energy Development Plan 2018-37 (AEDP). Supporting the AEDP is the Power Development Plan 2018-37 (PDP) which aims for 37% of the power mix in 2037 to be from non-fossil fuel sources.

We expect solar and biomass power to be the main drivers for renewables growth, advancing climate plans and ensuring that Thailand remains Southeast Asia's outperformer in renewable energy development.

In the short term, we anticipate the focus of non-hydroelectric renewables development in Thailand will be on biomass and solar. This view is underpinned by projects in the pipeline and government plans.

On Oct 31 last year, commercial operation began at the world's largest hydro-floating solar hybrid installation at the Sirindhorn Dam, adding 45MW of capacity to Thailand's electricity grid. The Electricity Generating Authority of Thailand (Egat) also announced plans to proceed with 15 other similar projects, such as the 24MW floating solar installation at the Ubolratana Dam. Egat expects these projects to contribute a cumulative 2.7GW of capacity for the power market. 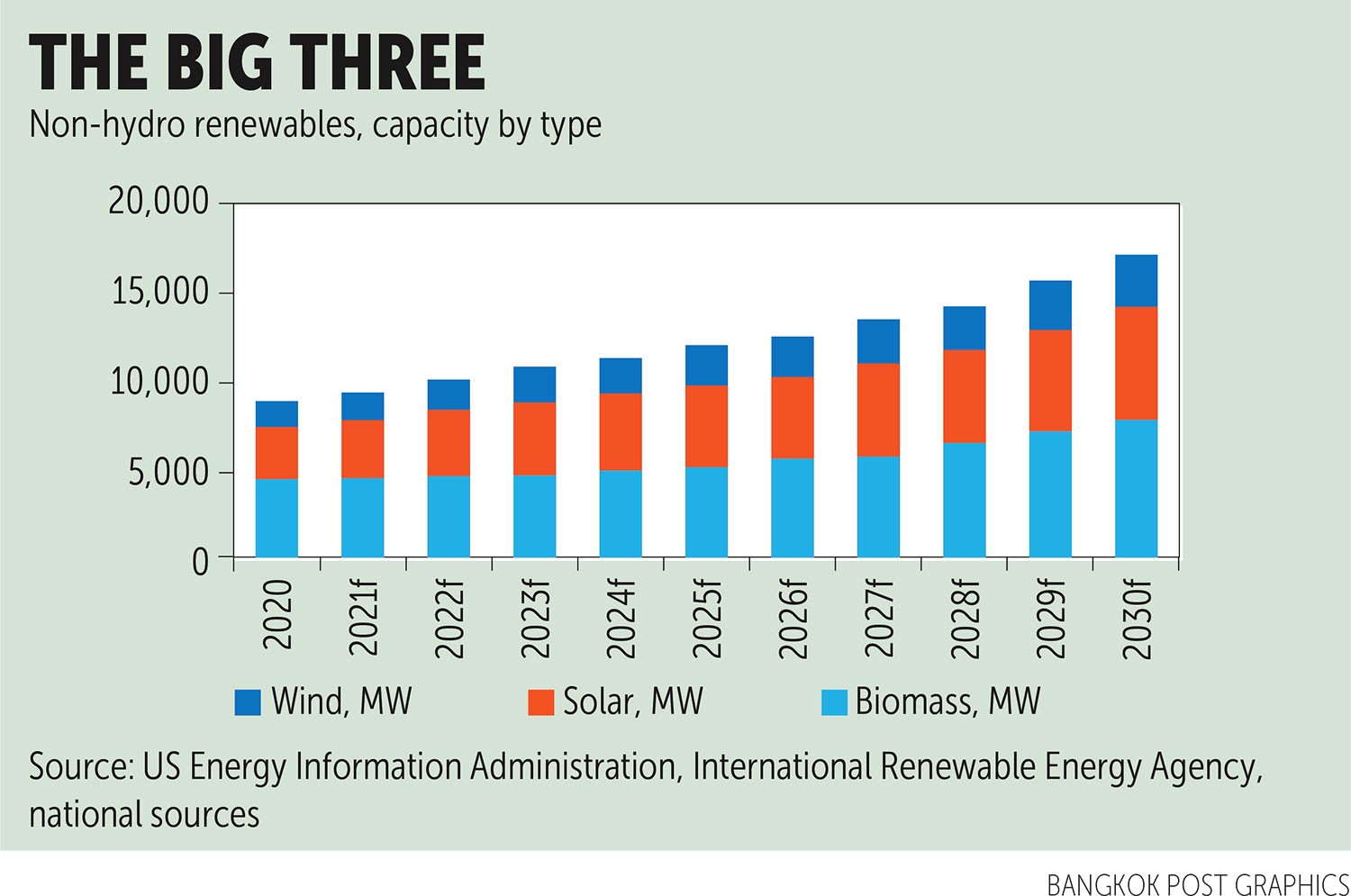 Aside from solar power, biomass will also be a key performer. We expect biomass power plants, which typically generate electricity from biogas, biomass and waste, to be developed in communities outside of metropolitan areas, where most agricultural activities happen. This will enable power plant operators to capitalise on proximity to biomass fuel sources.

Furthermore, the government's Energy For All plan will support the development of community biomass power plants. As a result, we foresee solar and biomass to lead the growth of renewables.

However, longstanding dependence on fossil fuel power plants will present challenges to carbon emissions reduction. Thailand's power sector has been heavily reliant on fossil fuels, which we estimate as accounting for 78.7% of the current power mix.

Among fossil fuels, natural gas dominates the market, with a 2021 generation of 115 terawatt-hours, more than triple the share of non-hydroelectric power at 35TWh. We expect this disparity between the two subsectors to remain through 2030, as the country still has gas-fired power plants in its project pipeline.

Notably, two major gas-fired power plants by Gulf Energy Development, one in Chon Buri and another in Rayong, will have a combined capacity of 5.3GW. We expect the Chon Buri plant to come online this year and the Rayong plant in 2025.

Furthermore, we point out that at COP26, Thailand did not join the coalition to phase out coal and stop coal power development. As a result, our forecast shows that conventional thermal generation will remain the largest contributor to Thailand's power mix through 2030 with minor abatement.