This is suspected to have largely stemmed from fake negative results from pre-departure testing or inaccurate testing that's only been detected after travellers arrive.

The call was made by Pichet Panapong, Phuket's vice governor, during Thursday's teleconference between Phuket Covid-19 control organisations and the CCSA's operations centre. 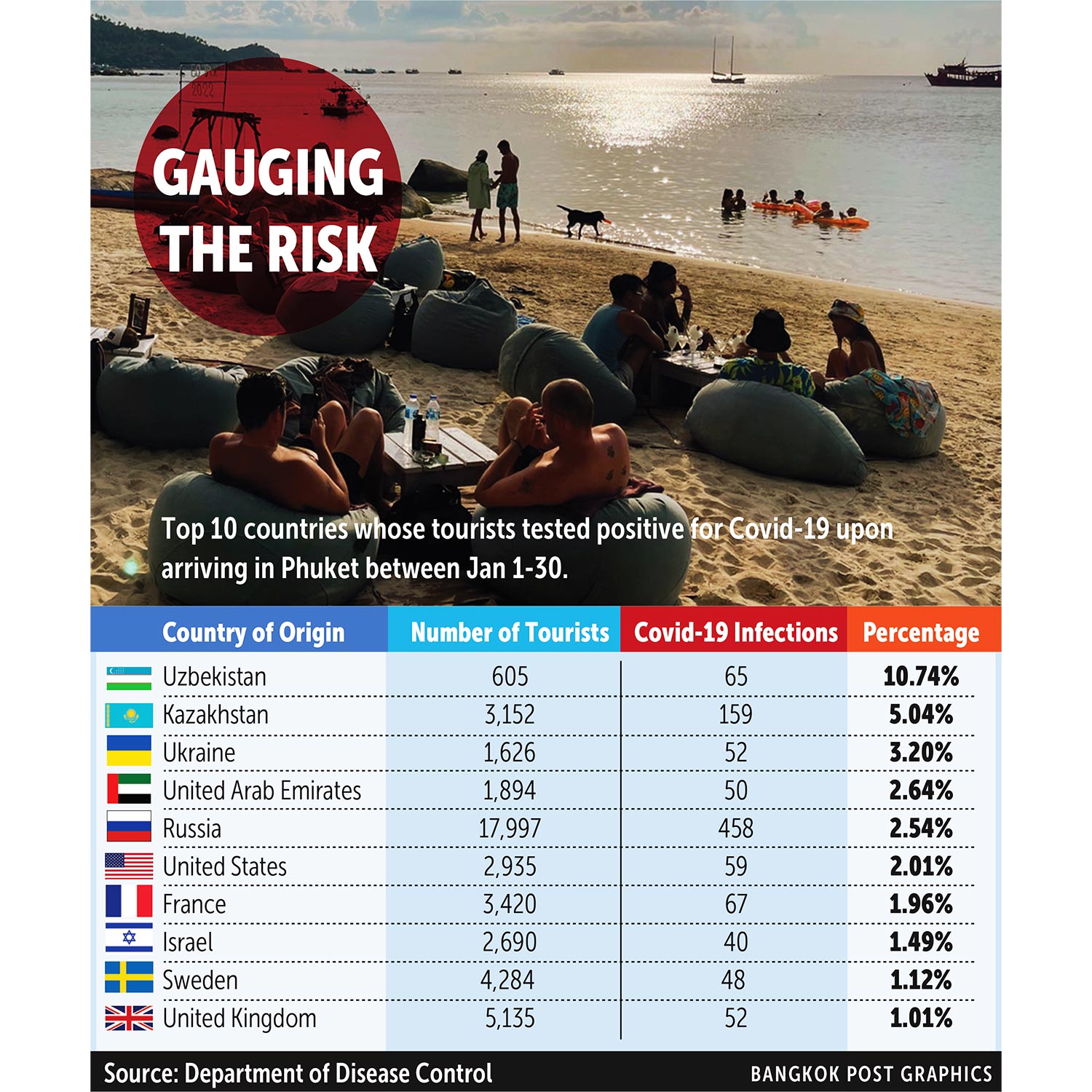 He said the rising number of infections among arriving tourists is likely to increase the burden for the province in arranging hospitels and hotel isolation for visitors.

This number is expected to rise given the many tourists applying to enter the resort island under the government's quarantine-free Test & Go scheme that resumed on Tuesday. "False Covid-19 RT-PCR test results are assumed to have something to do with the sharp rise in the number of post-arrival positive tests among tourists,'' he said.

Other travellers simply used the result of a rapid antigen test even though they were actually required to show the result of RT-PCR tests before leaving for Thailand, he said. "These problems are something beyond Phuket's authority to deal with and help is needed from the CCSA's operations centre,'' he said.

Phuket also wants the Civil Aviation Authority of Thailand to warn airlines bringing international travellers to Thailand about the need for them to strictly verify passengers' RT-PCR documents prior to departure, he said.

As for post-arrival Covid-19 testing, Phuket is working hard to ensure the testing area at the airport won't be overcrowded, especially whenever many passengers arrive at the same time due to flight delays, Mr Pichet said.

The airport currently handles around 3,000 RT-PCR tests per day, while its capacity can be maximised to 10,000 a day if needed, he said.

The infection rate of about 3% after the first tests are conducted on arriving passengers is alarming, he said. Currently, the Covid-19 sitution among international tourists arriving in Phuket is still under control, said Dr Veerasak Lorthongkham, director of Vachira Phuket Hospital.

However, if the infection rate surpasses 5%, the province's hospitel and hotel isolation system will be overwhelmed as all hotels receiving international visitors are now required to reserve about 5% of their rooms for this purpose, he explained.

Despite promising to find measures to help curb rising Covid-19 infections among arriving tourists, the CCSA's operation centres on Thursday foresaw an even greater burden on Phuket as up to 40% of the 20,000 international tourists registering to enter Thailand under the Test & Go scheme on Monday chose to arrive in the island.

On Monday and Tuesday, a total of 7,742 travellers arrived in Thailand, 344 of whom tested positive for Covid upon arrival.

Soldiers arrested two fleeing men in Fang district of Chiang Rai and later seized about 3 million methamphetamine pills dumped while they were being chased through nearby Mae Ai border district of Chiang Mai early Friday morning.

WELLINGTON: Torrential rain hit parts of New Zealand for a fourth day on Friday, forcing hundreds of people from their homes as rivers overflowed their banks and waterlogged ground becomes unstable.