The combined value of foreign and local applications for investment promotion in 2021 tallied 643 billion baht, an increase of 59% from a year before, led by an uptick in foreign direct investment (FDI) in tech sectors and more projects in the bio-, circular and green (BCG) industries, as well as a continued push in the power generation sector. 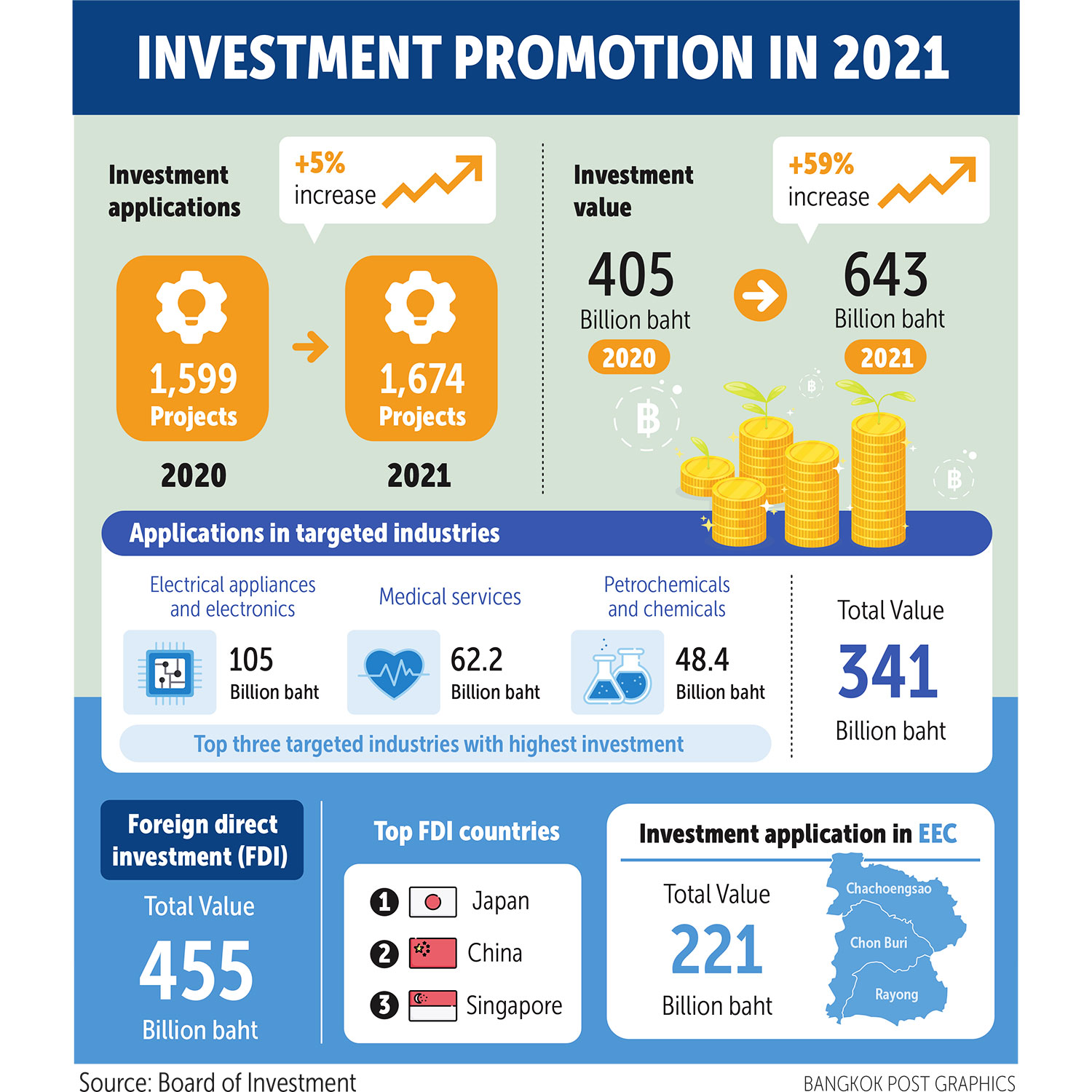 "Investment applications for BCG activities are continuously increasing as investors take advantage of the promotion measures we issued to help Thailand's economy. Companies operating here are preparing for changes to consumer demand and supply chains after Covid-19 is controlled," said Board of Investment (BoI) secretary-general Duangjai Asawachintachit.

"As for FDI, we are seeing constant growth in target sectors such as smart electronics, speciality chemicals, bioplastics and the medical cluster."

Electrical appliances and electronics once again topped the list of target sectors attracting the most applications with 105 billion baht in value, reflecting soaring demand for electronics devices and parts.

The medical sector was second with a value of 62.2 billion baht, followed by petrochemicals and chemicals at 48.4 billion, agriculture and food processing at 47.7 billion, and automotive and parts at 24.6 billion.

Overall, the 12 target sectors attracted a combined value of 341 billion baht, representing 53% of the total pledges.

The fastest growing sector was digital, which saw the value of applications soar almost ninefold to 14 billion baht in 2021, up from 1.61 billion a year earlier.

The combined value in activities classified as BCG, a cross-sector grouping of biotechnologies and environmentally friendly manufacturing, more than doubled to 152 billion baht, up from 68.4 billion in 2020, confirming a growing commitment to sustainable activities, including bio-plastics and recycling farm waste.

The power generation sector saw a significant proportion of investment as its infrastructure expands and transitions to a higher proportion of renewable energy and clean natural gas.

Meanwhile, FDI represented 71% of total pledges worth 455 billion baht for a total of 783 project applications, nearly triple the value from the 169 billion worth of applications filed in 2020.

Japan again topped the list of FDI source countries with a combined investment value of 80.7 billion baht for 178 projects, followed by China with 38.6 billion in investment pledges for 112 projects.

Singapore was third at 29.7 billion baht for 96 projects.

The top three sectors for FDI applications were electrical appliances and electronics, petrochemicals and chemicals, and the medical cluster.

In terms of regions, the Eastern Economic Corridor, a prime industrial area comprising Chon Buri, Chachoengsao and Rayong, attracted the most applications with 221 billion baht, an increase of 34% from 2020.

In a related development, the BoI meeting chaired by the prime minister also approved additional incentives to support the strategy to enhance the country's position as a regional bio-hub through its bio-economy initiative.

The measures include two new businesses being incorporated on the BoI list of activities eligible for incentives: digital trading platforms for agricultural products and agri-food industrial estates/parks.