CPI jumped by 3.23% last month due to energy prices

The Commerce Ministry expects headline inflation in February to increase slightly after a larger than expected surge in January. 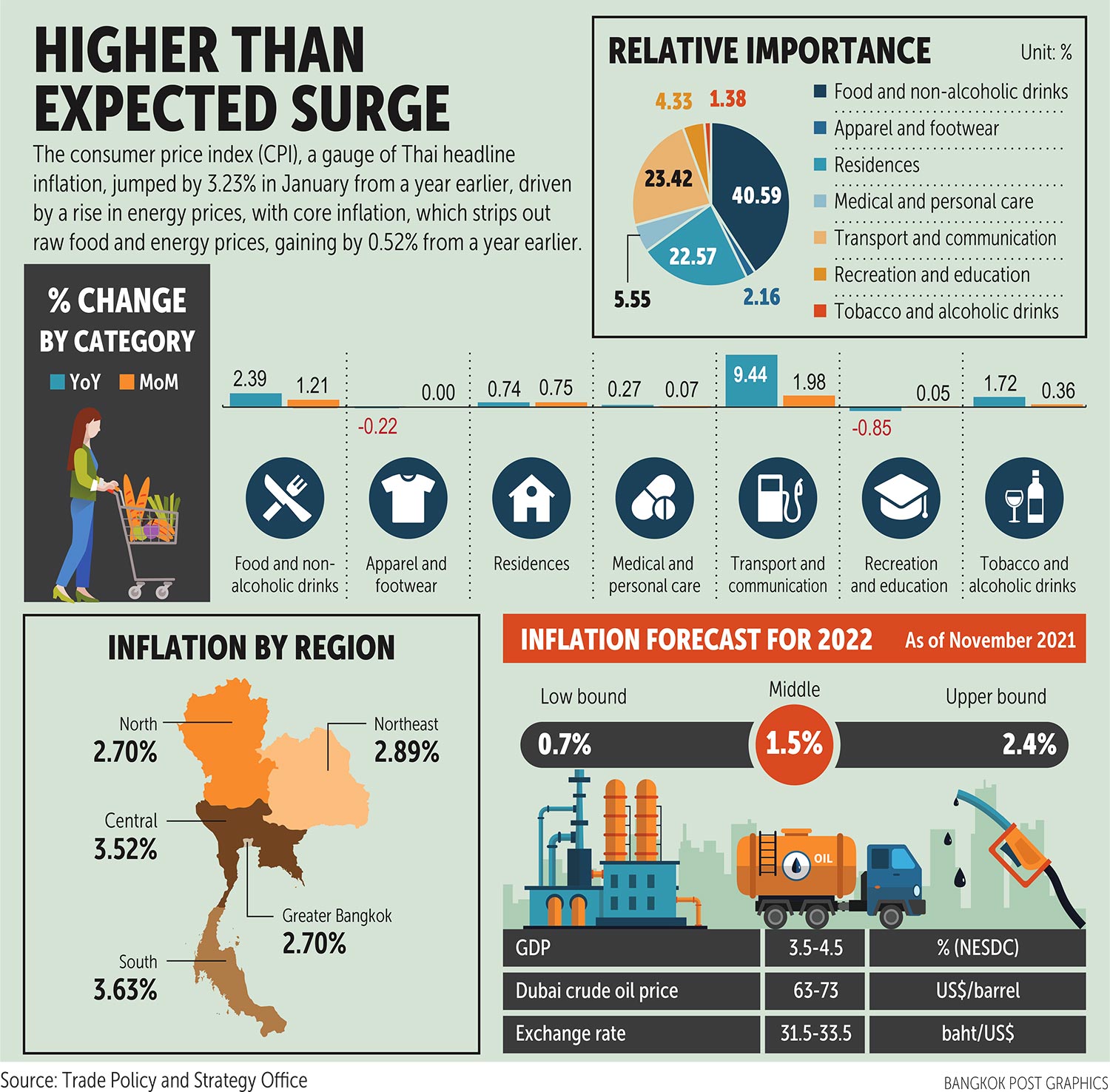 Ronnarong Phoolpipat, director-general of the Trade Policy and Strategy Office, said the February headline inflation rate is expected to move in line with the economy, especially in terms of retail gasoline prices, which have gained steadily in parallel with global prices. Another consideration is the low-price base in February 2021.

Rising production costs including raw materials, logistics and wages as well as the end of the land and building tax reduction in 2022 would affect the manufacturing sector, and eventually the prices of goods and services, he said. External factors such as increasing transport and logistics costs resulted in rising food prices globally, said Mr Ronnarong.

However, he clarified this was not a formal prediction of February's inflation rate.

The ministry reported yesterday headline inflation, gauged by the consumer price index (CPI), rose 3.23% year-on-year in January. It was the fifth straight month of year-on-year increases, which were recorded last year at 2.17% in December, 2.71% in November, 2.38% in October, and 1.68% in September, following a 0.02% decrease in August 2021.

Core CPI, which excludes raw food and energy prices, rose 0.52% year-on-year in January, and was up 0.26% from December.

According to Mr Ronnarong, there were several factors accelerating inflation in January, particularly energy prices, which rose by 19.2% year-on-year. Energy prices made a 2.25% contribution to inflation.

Other key factors included the prices of fresh food items such as pork, chicken and eggs. These three items contributed 0.67%, 0.03% and 0.05%, respectively, to inflation.

He said the prices of other items, such as vegetable oil, food items consumed at home and away from home, and personal care expenditures, also slightly increased in line with higher production costs. Mr Ronnarong said the price base last year was also quite low.

"The direction of inflation aligns with the improvement of relevant key economic indicators. The demand side saw an expansion of value-added tax revenue for domestic purchases and imports, imports of consumer goods, new motorcycle registrations and imports. The supply side reported an increase in capacity utilisation, the manufacturing production index, the producer price index and the construction materials price index."

The ministry is keeping its average headline inflation forecast at 1.5% this year, compared with 1.23% in 2021.