Cabinet to consider measures to ease impact of fuel prices

Soaring diesel prices are straining governments as they seek to stave off inflation from rising energy costs and quell discontent from aggrieved truck operators that are seeing profits shrink.

The diesel market in Asia has tightened significantly as reduced supplies from China coincided with production disruptions and surging demand in economies rebounding from the pandemic. That has led to rising prices, putting a strain on truckers and governments including Thailand, which this week rejected a plea for an extra fuel subsidy, saying it would cost as much as US$7.3 billion a year.

The increasing cost of fuels, such as diesel and gasoline, is posing a challenge for authorities and central banks globally as they try and tackle inflation while supporting economic growth. It is also exposing Asia's fragile supply chain to more volatility as angry truck operators resort to strike action. Convoys of trucks clogged streets in Bangkok on Tuesday after the subsidy snub, while similar protests have been seen in Bangladesh and Indonesia.

The sector has experienced numerous hurdles since the start of the pandemic, from the infection of drivers that led to widespread labour shortages to supply-chain bottlenecks caused by delayed seaborne shipments and congested ports.

Diesel's surge is part of a global upswing in energy prices that has seen crude rally to the highest level since 2014 as consumption picks up and stockpiles dwindle. Further gains are forecast for oil, a rise that will only stir more resistance from truckers who are already saying enough is enough.

"We have been patient and run at losses for a year," said Apichart Prairungruang, president of Land Transport Federation of Thailand. The main industry body, which represents about 10,000 members, plans to raise service charges from Feb 15. "We need to come out to fight."

Finance Minister Arkhom Termpittayapaisith on Friday that the cabinet meeting next week will discuss a package of measures to mitigate the impact of high fuel prices.

He said the package will include measures from the energy and finance ministries. He did not give further details. 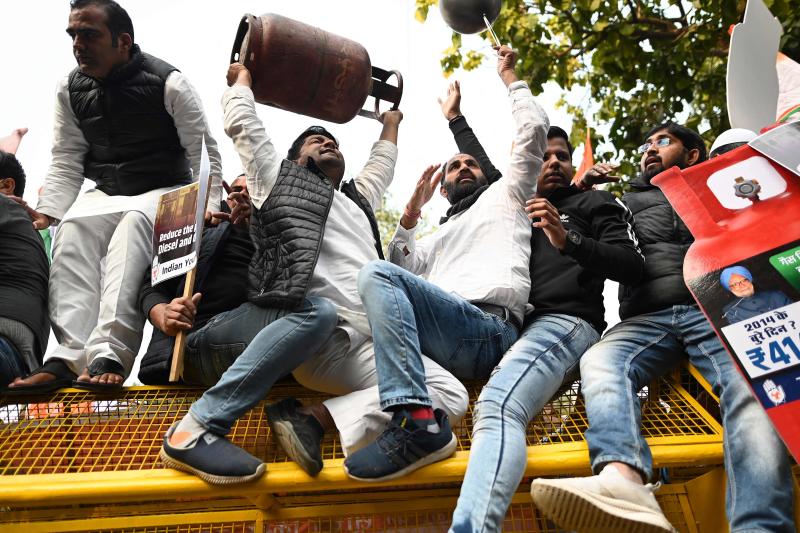 Activists of the Indian Youth Congress (IYC) sit on police barricades as they shout slogans during a protest against the price hike of fuel in New Delhi on Dec 14, 2021. (Photo: AFP)

Trucks are the backbone of supply chains across Asia and disruptions such as strikes can worsen shipping delays and congestion at ports. There’s likely to be little respite for diesel consumers in the near term, with industry consultant FGE predicting elevated prices until at least the middle of year as oil refiners seek to rebuild depleted stockpiles.

In India, the main industry body estimates the cost of operating trucks has climbed by 15% to 20% over the past year, outpacing a gain in freight charges. There are also concerns that diesel prices will increase again once elections in some states end in March. The fuel, which accounts for almost 40% of total oil-product demand, has remained steady since November after a cut to taxes.

"There would be a big repercussion," said Naveen Gupta, secretary-general of the All India Motor Transport Congress, the industry group that represents about 10 million truck and bus operators. "There will be clamour for agitation asking the government to cut down prices."

While India’s diesel and gasoline prices have not increased since November, Bloomberg Intelligence predicts inflation in January likely climbed above the central bank’s 6% target ceiling. Japan is subsidising transport fuels as inflation expectations hit the highest since 2008, and the South Korean central bank has expressed concerns over rising prices.

Overall transport costs have climbed about 13% over the past year in Australia, primarily due to more expensive fuel, which has prompted the National Road Transport Association to seek assistance from the government. In Singapore, fuel costs make up about 30% of monthly expenses and the industry has no choice but to boost freight charges, which is likely to "snowball into other industries," said Cherie Goh, chairwoman at Singapore Transport Association.

"The trucking industry is facing a double whammy from higher diesel costs and supply constraints, which translates into a longer lead time for delivery in most countries," said Howie Lee, economist at Oversea-Chinese Banking Corp. "Almost about every business in the world right now is raising their selling prices to stay afloat in this inflationary environment."

Bangkok governor Chadchart Sittipunt is planning to stimulate the local economy by encouraging some tourist attractions to open until midnight.

The government is still pressing ahead with its vaccine drive despite Covid-19's pending downgrade in status to "communicable disease under surveillance" from Sunday.