Hotel investment continues to be robust with sales volume this year expected to be 30% higher than the 10-year average pre-pandemic amount, the second consecutive year of growth, according to property consultant JLL. 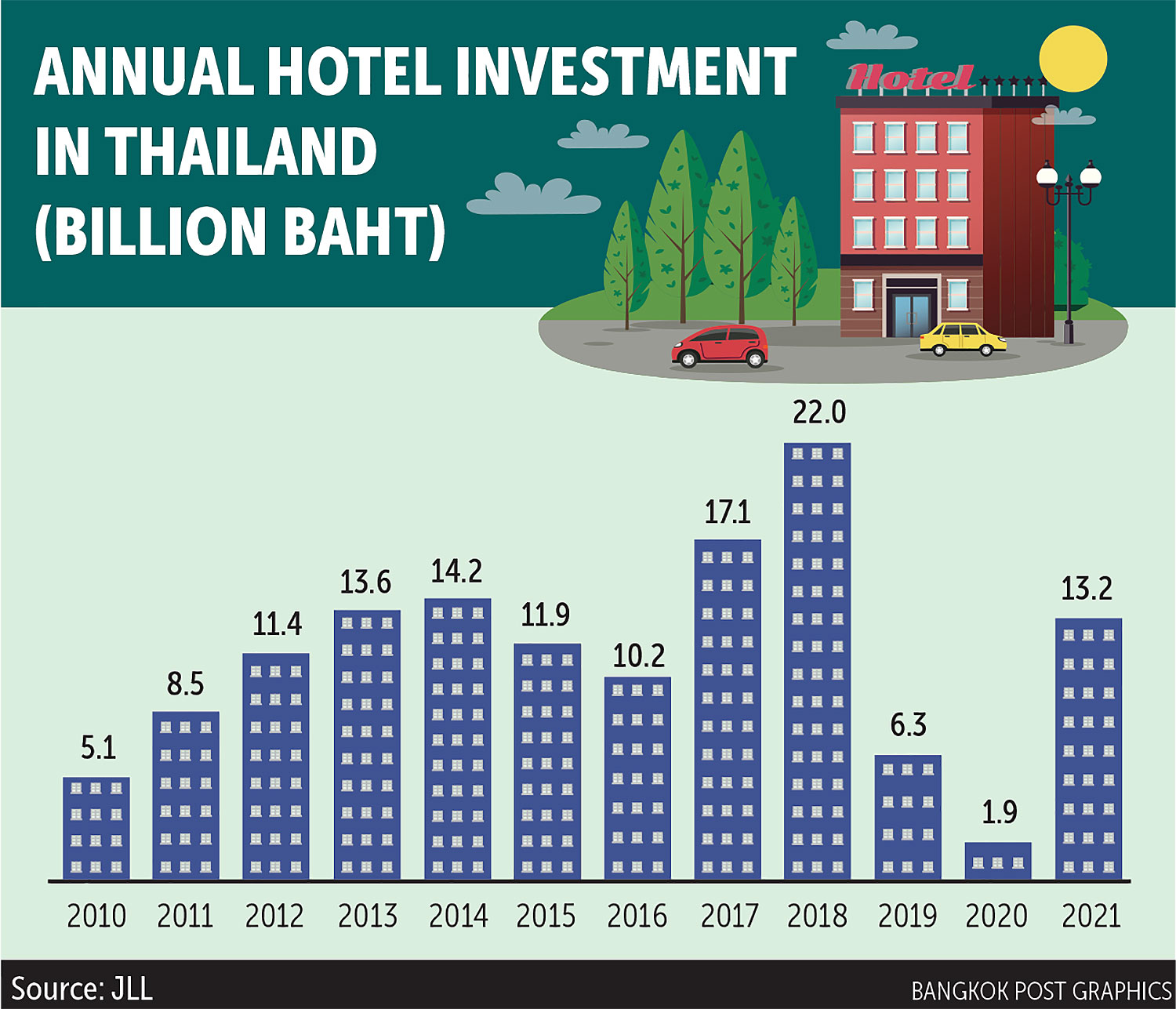 "The number of hotels being sold this year will be lower as most of them will be bigger in size with over 1 billion baht per deal, compared with 500-600 million baht on average last year," he said.

The volume last year was from 17 transactions as some sellers sold multiple assets.

About 94% of the sellers were Thai, while 60% of the buyers were foreign investors, mostly from Hong Kong, the Middle East and the US.

Spending by investors from Hong Kong and the Middle East was around 2-3 billion baht each.

"Overseas investors will remain active this year as they are expected to account for half of the total volume," said Mr Chakkrit.

"This year, more hotels in Bangkok will be on offer and most of the foreign buyers love Bangkok."

In 2020, there were no hotel transactions but sales volume of 1.9 billion baht were deals that were agreed in 2019.

If there was no pandemic, the sales volume should have reached 10-12 billion baht in 2020.

In the second half of 2020, hotel owners started to realise that the pandemic was going to take a long time to blow over as a number of them considered taking their assets to the market, he added.

Amid the pandemic, the majority of buyers previously expected 30%-40% discounts, however, after a period of time, many quality investment-grade assets were being offered at prices with discounts much lower than 30%-40%.

Last year, discounts on properties in Samui and Phuket varied by location and asset quality.

Strategic assets that were in prime locations were able to command higher values.

"Bangkok had held up the most in terms of value with very little change in value, compared to the pre-Covid period," he said. "Phuket and Samui saw larger discounts with about 60% showing more than a 30% discount."

Generally, hotel deals in Bangkok are low in number as the majority of hotel owners, who are wealthy families or well-capitalised firms, do not need to sell, he added.

In Bangkok, there were over 150,000 hotel keys. Of this number, only 1%-2% historically traded per annum prior to the pandemic.

"Bangkok is the most sought-after hotel market in Thailand. Whenever realistic hotel opportunities are being offered, there is usually a high level of participation from overseas buyers."

JLL advised on both the buy-side and sell-side at around 6.3 billion baht or 50% of the total last year. The data of the hotel sales volume it collected did not include sales to real estate investment trusts and non-arm's length transactions.