The government will further relax entry rules for foreign visitors starting next month, bowing to demand from the local tourism industry to lower costs as more countries ease border controls to lure holidaymakers.

Vaccinated arrivals to Thailand will not be required to undergo a mandatory polymerase chain reaction test on the fifth day of the arrival starting March 1. Instead, they can do a self-antigen test, scrapping the requirement to have a confirmed hotel reservation for the test.

The Centre for Covid-19 Situation Administration (CCSA), the main virus task force chaired by Prime Minister Prayut Chan-o-cha, also lowered the minimum medical insurance coverage for visitors to no less than $20,000 from $50,000.

The government is making it easier for travellers to visit the country’s famed beaches, temples and national parks after nearly two years of tight border curbs decimated the tourism industry. 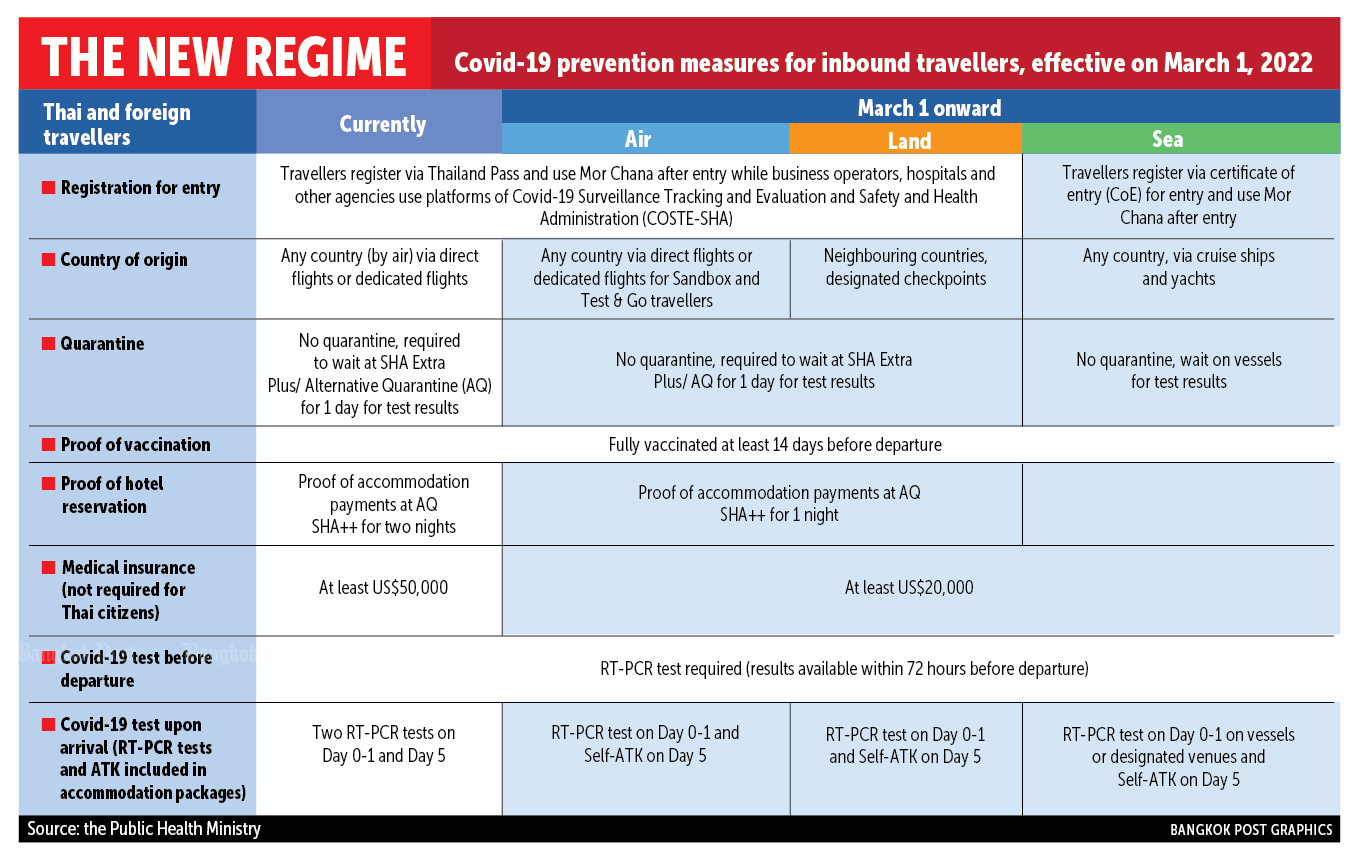 While the nation is battling a spike in Omicron-led Covid cases, the low mortality rate compared to the peak Delta wave means healthcare facilities can cope with the outbreak, Taweesilp Visanuyothin, a spokesman for the task force, said at a briefing Wednesday.

Thailand saw Covid cases jump to 21,232 on Wednesday, a six-month high, but the deaths stood at 39, compared with more than 300 a day during the peak of the Delta wave in August.

He said the mandatory fifth-day test can be conducted using ATK because results were very accurate and widely accepted.

During the CCSA meeting, the public health minister said the number of operators answering calls to the 1330 hotline would be increased after Gen Prayut said he called the hotline and the person who answered sounded exhausted. Currently, he said, there were about 3,000 operators working the Covid advice hotline operated by the National Health Security Office.

Asked whether hospitals were prepared to accommodate more Covid-19 patients, Mr Anutin said all measures have been put in place. If necessary, hospitals could be expanded.

The current rate of infections is high, he said, but health authorities are trying to minimise the number of critically ill patients and fatalities.

He told people to adjust their behaviours, get vaccinated, and avoid going to parties and other crowded places.

The baht rallied as much as 0.4% on expectation easier visa rules will boost the country’s current-account surplus. The currency traded at 32.329 to a US dollar, extending gains this year to 3.3%.

The government has been experimenting with several plans in recent month to try to revive the travel sector that used to contribute to about one-fifth of the economy, with 40 million foreign tourists generating more than $60 billion in 2019.

The country has cleared about 302,000 visitors under the Test & Go programme since it was reopened for a second time on Feb 1, according to Dr Taweesilp.

Bangkok, eastern province Chonburi and resort island Phuket received the most travellers under the plan, he said.