Bid to shift EVs into overdrive

While most business leaders welcome the state's latest package to spur EV production and adoption, not everyone is fully on board

The government's multi-billion-baht package to help electric vehicles (EVs) gain ground in the automotive market is being scrutinised as to whether it will become a powerful new economic driver, with benefits shared across society.

Since the cabinet approved price subsidies and a tax cut for EVs to stimulate demand and supply, car manufacturers have a better idea of how to benefit from the incentives, but according to business leaders this is just a start as Thailand faces new challenges.

Up to 94,000 EVs of all types will be sold in the market and 20% of them will be battery electric vehicles (BEVs), said Narong Sritalayon, managing director of Great Wall Motor (Thailand), attributing the increase to greater EV promotion by the government.

Last year the number of newly registered BEVs, comprising cars and pickups, in Thailand stood at 1,958, a 53% increase from 2020, according to the Federation of Thai Industries.

Finance Minister Arkhom Termpittayapaisith said while the new excise tax structure for EVs would reduce the country's revenue, the promotion of EVs will create new investment, jobs and demand. All of these should lead to greater returns for the country in the form of income tax revenue, he said.

Mr Arkhom said the government has to shoulder the burden in the initial phase to generate new investment flows and employment.

He said the situation is similar to auto industry promotion 30 years ago, which led to the country's automotive cluster and turned Thailand into an export hub for pickups that has earned much revenue for state coffers.

The cabinet recently approved a package of incentives, including subsidies, to promote the adoption of EV usage and production in Thailand.

Nutthakorn Utensute, a spokesman for the Excise Department, said the country is expected to use 3 billion baht on the EV subsidy scheme in the first year and 40 billion baht over the four-year period.

Government borrowing of 1.5 trillion baht under the emergency decree loans the past two years to alleviate the impact of the pandemic has resulted in a spike in public debt to 9.64 trillion baht or 59.6% of GDP as of December 2021. This is an increase from 6.9 trillion baht or 41.0% of GDP in 2019.

As a result, the government raised the public debt ceiling to 70% of GDP from 60% to accommodate further borrowing in the future.

Mr Arkhom said this does not mean the government intends to borrow until the debt hits the ceiling, instead focusing on a sustainable fiscal approach over the next four years and in the long run. 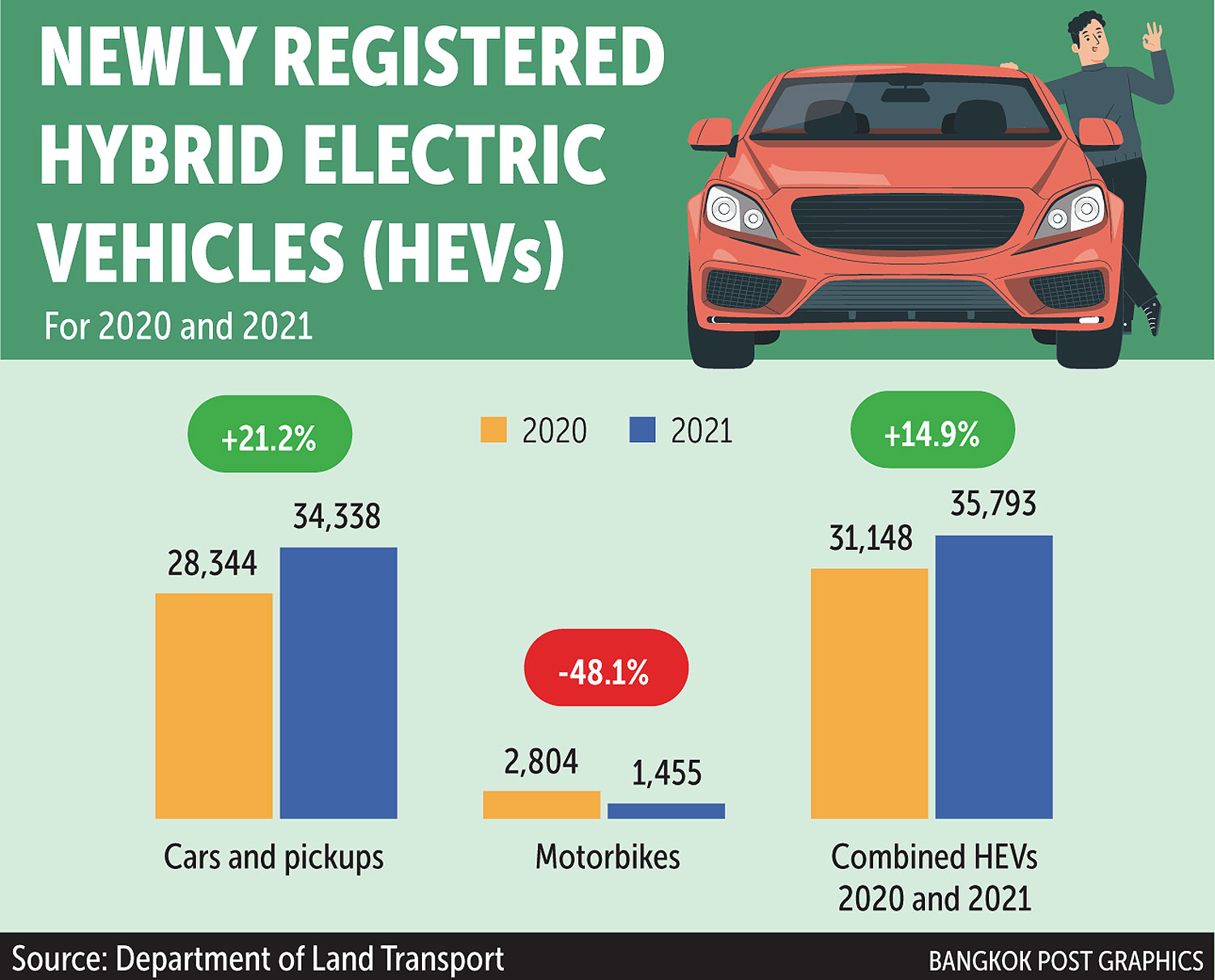 Sisdivachr Cheewarattanaporn, president of the Association of Thai Travel Agents, said the government policy to push the industrial sector as a economic growth driver is positive in theory.

However, it is still unclear how sectors such as EV manufacturing can meet the goal of distributing income to provincial economies, particularly in the micro sector, when the tourism sector is just starting to gain ground following its worst crisis, he said.

"The government should not forget the tourism industry, which contributed almost 20% of GDP before the pandemic, as one engine that can help reduce income inequality," said Mr Sisdivachr.

"People in the provinces can share in the benefits of tourism activities. How will the government compensate for the lack of revenue for grassroots people without such a driver?"

He said economic confidence in Thailand is still dependent on the tourism sector in the future, citing a survey of Thai-Chinese businessmen in the country where 90% believed an economic recovery will not happen without the tourism sector.

PROGRESS AT A PRICE

Sanan Angubolkul, chairman of the Thai Chamber of Commerce, said the government's latest incentive package should significantly help promote EV use and simulate EV growth in the country.

The new incentives align with the targets of automotive multinationals gearing toward EVs, said Mr Sanan.

"I believe it is not beyond Thailand's capability to become the regional EV production centre," he said.

"I also believe EV markets both domestic and international will grow on a continuous basis as EVs are a global trend and included as one of Thailand's S-curve industries."

Yet Mr Sanan warned this transition comes with a cost, in this case a significant drop in locally produced auto parts and a massive layoff as a result.

The government urgently needs to speed up assistance and training of existing workers who are familiar with regular internal combustion engine (ICE) technology, he said.

"Although EVs and digital businesses are global trends, Thailand should ensure we're heading towards the principle of self-sufficiency," said Mr Sanan.

"Businesses that are the core strength of the country such as tourism, agriculture, food bio-economy and lifestyle should not be ignored and need to be continuously promoted."

Chaichan Chareonsuk, president of the Thai National Shippers' Council, said the latest incentive package to promote the usage and production of EVs in Thailand is a good move because it aligns with a global trend and environmental protection.

However, he warned a drastic and excessively rapid transition may negatively affect Thailand's existing auto supply chains that have operated for several decades.

Such a shift could affect employment not only in the country's automotive industry, but also the parts industry, said Mr Chaichan.

Katikar Tipayalai, a Chulalongkorn University economist, said the government is using the right policy to support EVs because it addresses the price factor, but it only encourages short-term purchases.

The EV incentive package expires in 2025.

If the government wants to build domestic demand for more production in the future, it may take several years for foreign automakers to seriously invest in Thailand, she said.

Around the world, EVs have been supported through the provision of privileges from governments over the long term after the purchase of an EV, rather than only receiving discounts on EV prices, said Ms Katikar.

Norway has the most EV users in the world and there has been R&D on such vehicles in that country since the 1970s.

Norway was able to shift production so that EVs made up 100% of the total since 1990 and EVs now account for 87% of car usage across the country, she said.

In Germany, which is the leader of the EU Green Deal, the government offers EVs an exemption of 5-10 years from vehicle taxes and US$8,000-10,000 in compensation, including privileges such as free parking.

In China, there is a modest subsidy scheme of between $1,800 and $4,000 per vehicle, along with other support measures that vary by county, such as reduced parking rates, reduced charging rates at public charging stations as well as free tolls.

In the long term, to achieve the national target for EV usage, Ms Katikar suggested the government push the production of EVs for domestic use.

The government can also designate EV usage in government agencies or among public transport providers, she said.

The EV incentive package is the first step in showing Thailand has the potential to become a regional hub for EV production, said Amorn Sapthaweekul, deputy chief executive of Energy Absolute Plc (EA), a renewable energy developer and a pioneer in domestic EV development.

Before long EVs can become a key economic driver in Thailand, much the same way ICE-powered cars once were when Thailand was a major auto production base, earning it the nickname "the Detroit of Asia", he said.

Other measures to promote EVs will be included on a list, to be launched at the right moment, he said.

"The incentives announce to Thai and foreign investors a milestone has been reached in our EV development," Mr Amorn told the Bangkok Post in a phone interview.

"Without the announcement, carmakers and buyers would still be sceptical about the government's EV policy."

Informing the public of a clear policy direction and concrete action plans is one of the government's main tasks, he said.

Mr Amorn said EVs used for commercial purposes are not a focus in this package, but he is optimistic about future government privileges in this category.

"There are many ways to promote EVs other than subsidies," he said.

Operators of trucks transporting goods should only be allowed to enter the inner areas of Bangkok if they use EVs, said Mr Amorn.

At present, trucks can only enter such zones at certain times of the day as city officials want to curb the levels of air pollutants, including PM2.5 ultra-fine dust, which are especially emitted from ageing ICEs.

EA earlier urged the government to promote commercial EVs, especially for mass transit and the transport of goods, as part of the state's efforts to grow the EV ecosystem and deal with the dust and carbon dioxide emissions.

The Prayut Chan-o-cha administration announced Thailand set a goal to achieve carbon neutrality, a balance between carbon dioxide emissions and absorption, by 2050.

Sompote Ahunai, chief executive of EA, said earlier authorities should focus more on commercial EVs such as buses, boats and trucks, which are used for heavy workloads requiring a huge amount of diesel to fuel their large bodies and ICEs.

EA operates a commercial service providing electric boats for commuters along the Chao Phraya River in Bangkok and Nonthaburi.

The factory has a production capacity of 1 gigawatt-hour a year, which enables it to produce batteries for 4,160 buses or 30,000 saloons in the first phase.

Like the government, EA is in the initial stage of EV development. Other car and auto parts makers using ICE technology are also in the early portion of a shift towards EV technology, said Mr Sompote.

"Some ICE manufacturers may be looking for new markets in other countries where ICEs are still in use."

There is still time for manufacturers of ICE vehicles to change their production model, he said.

"Entrepreneurs who will miss out on the incentives are those who do not adjust," said Mr Amorn.

Last March the National EV Policy Committee announced it wanted EVs to constitute 50% of locally made vehicles by 2030, part of an ambitious plan to make Thailand a regional EV production hub.