Firefighters work on a building fire after bombings in the eastern Ukraine town of Chuguiv on Feb 24, 2022. (AFP photo)

As the world watched Russia shell Ukraine the past week, the global community is responding to the invasion with a wide range of sanctions against Vladimir Putin's invasion.

Spanning finance, trade, travel, international sporting events and even a ban on Russian cats competing in International Cat Federation shows, nations are showing their disapproval of the assault.

Pundits do not predict a quick resolution to the conflict, raising concern over a ripple effect on the Thai economy, particularly sectors that rely heavily on Russian money and resources, such as tourism and electronic supply chains.

The financial sanctions have already dealt a blow to tourists who may think twice before leaving for a holiday.

Prior to the pandemic, Russia was among the biggest revenue contributors to Thai tourism, generating around 103 billion baht from 1.48 million visitors.

Revenue from the Russian and Chinese markets combined for nearly one-third of the total tally in 2019 -- the last prosperous year for tourism that set an income record at 1.9 trillion baht.

Without Russian revenue this year, it could mean more bad news for Thai tourism as the remaining markets are frail and scattered compared with those two nations.

The indirect impact from the conflict, including soaring oil prices and limited airspace causing airplanes to reroute and add more hours and cost to flights, might also affect tourists from other countries.

Challenges are evident in other key sectors, such as surging prices of energy and raw materials as well as the blockade of transit routes for goods that must avoid the conflict zone. 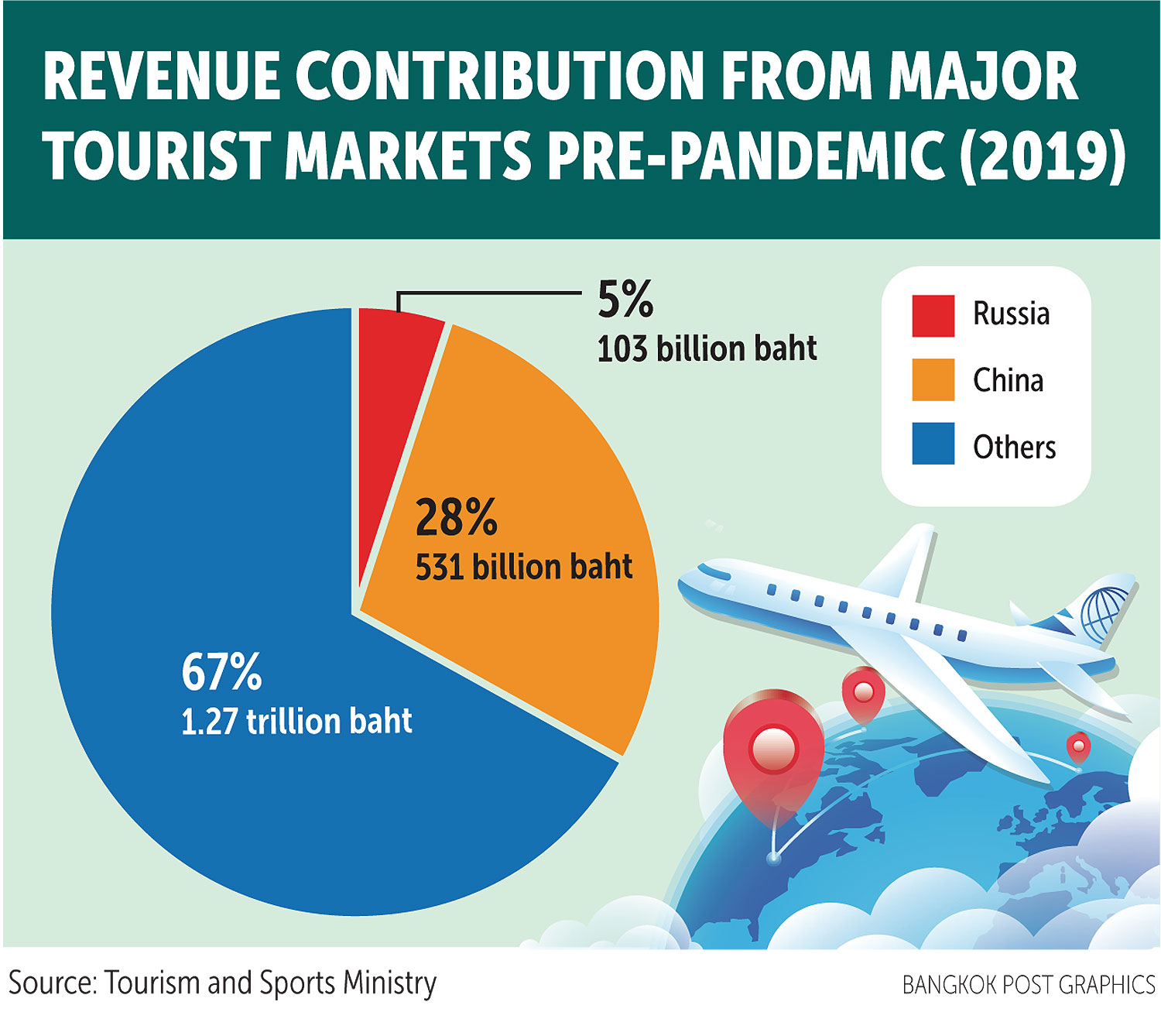 Bhummikitti Raktaengam, president of the Phuket Tourist Association, said even though the number of Russian tourists to Phuket remained stable last week, the conflict has caused transaction woes for tourists because they cannot use their credit cards or ATM services here.

The sanctions have weakened Russian purchasing power, leading to a plunging ruble, a limit on transactions and inflation.

Some tourists may consider other destinations where they can use Russia's Mir payment system, said Mr Bhummikitti.

He said one lesson from this crisis is to find alternative payment systems, such as letting hoteliers accept cryptocurrencies, which will enable operators and tourists to continue transactions under any circumstance.

He said if economic sanctions against Russia can be eased, it will help the global economy. However, operators are concerned the political conflict will take a long time to resolve. 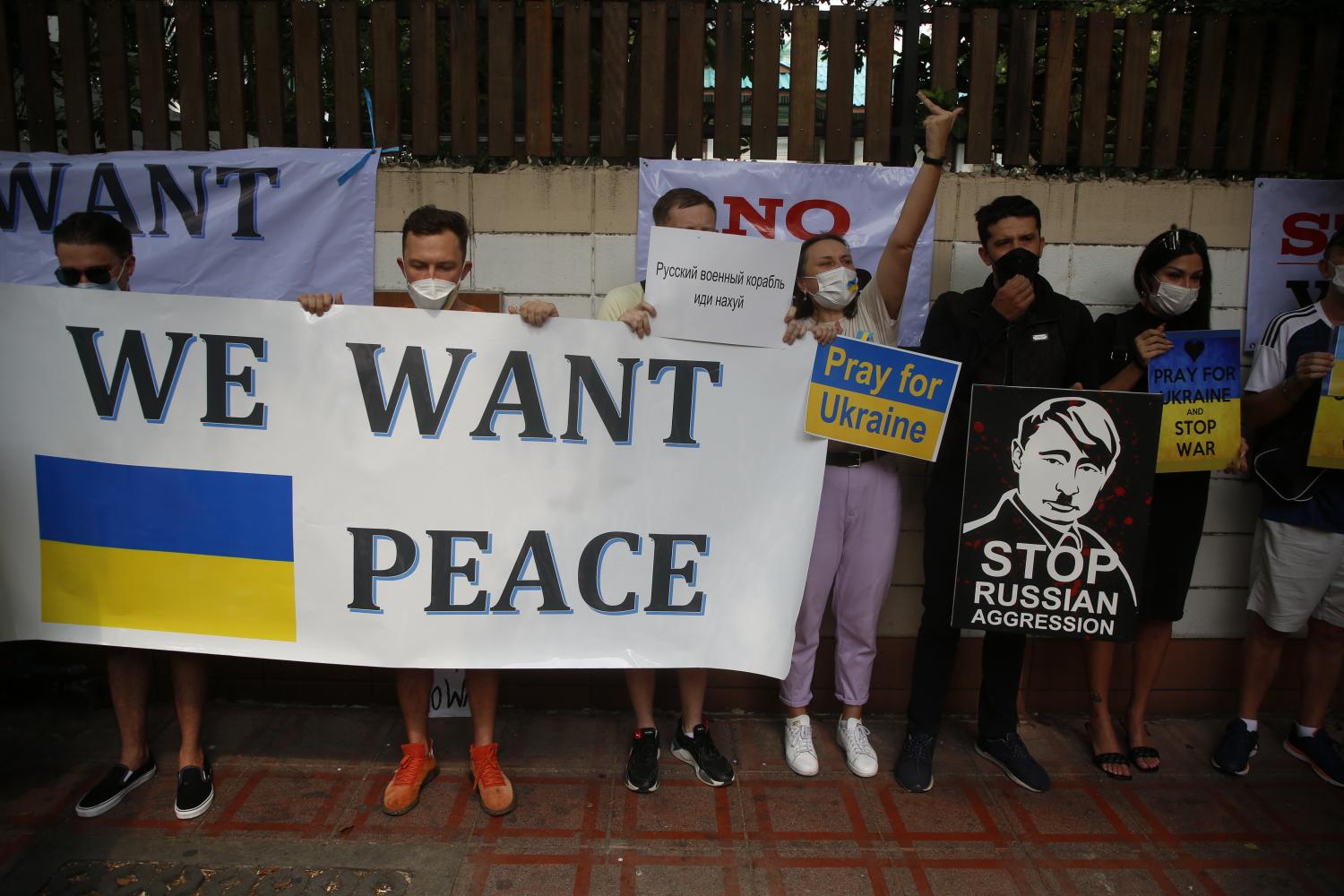 Ukrainians rally against the Russian invasion outside the Russian Embassy in Bangkok on Feb 28. Arnun Chonmahatrakool

Aeroflot, Russia's flagship airline, on Saturday announced the suspension of all international flights except in Belarus from March 8 as its aviation authority warned of the high risk of rental aircraft being impounded at foreign airports as part of Western sanctions.

Even though Russia has closed its airspace to all EU nations, the impact might not be tremendous as tourists from Europe normally take flights from Middle Eastern carriers to Thailand, he said.

However, if tensions escalate with more countries directly involved, tourists from Europe will shift their destinations within the region instead.

The European market is generally softer in March due to seasonality, said Mr Bhummikitti.

"Russia has contributed the most tourists to Phuket of any country since last October. Losing this market will have an inevitable impact on the industry," he said.

To find an alternative flow of tourists, the association plans to organise roadshows to Brisbane, Sydney and Melbourne in Australia from May 2-6, as well as Saudi Arabia and Israel.

Woranate Laprabang, Thai Vietjet (TVJ) chief executive, said the Russia-Ukraine conflict has created additional pressure on operating costs after oil prices peaked at US$110 per barrel, up from averages of $60-80.

Popular tourist destinations for Russians eager to travel include Turkey, Asia and Latin America, he said.

Many Russians are likely to put off overseas trips because of the devaluation of the ruble, political uncertainty and the difficulty in payment transactions, said Mr Chattan.

The TAT is waiting to see whether travel agents will urge tourists to postpone travel decisions in the future. 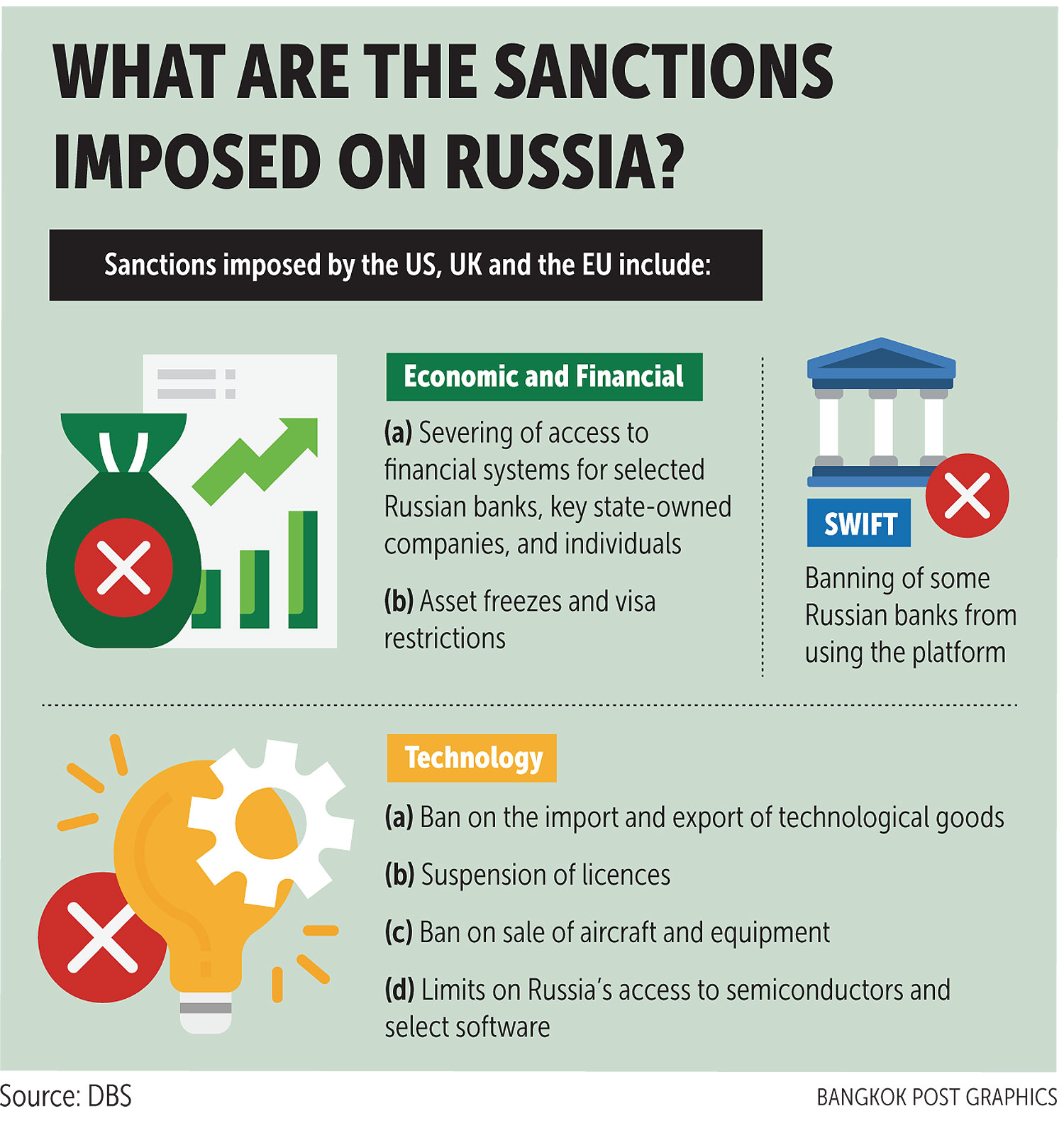 Gartner, an IT market research firm, indicated chipset manufacturing could be hampered by a supply disruption of raw materials from Ukraine and Russia, exacerbating a shortage.

The firm said in a statement sent to the Bangkok Post that Ukraine is a major source of inert gases, such as highly purified neon, that are critical for lasers to manufacture microchips.

Russia is a major supplier of palladium, another critical component used in wire-bonding, a technique for packaging devices into substrates for end-use electronic equipment.

The country also supplies aluminium and copper, which are crucial for chipset production.

"A potential sanction on palladium from Russia and Ukraine will trigger a shortage and price hike," Gartner's statement read.

According to Gartner, although chip manufacturers claim a diverse raw materials supply chain, there is a risk of a new wave of panic buying in the face of the war.

"It is likely that companies will indulge in panic buying again, which could prolong the chip shortage and cause the prices of chips to escalate further," Gartner said.

The firm indicated trade sanctions imposed on Russia could also affect semiconductor supply chains and manufacturers should include sanctions when planning their mitigation activities.

Gartner suggested manufacturers explore alternative new local suppliers and the possibility of using recycled materials, while reevaluating existing inventory and the severity of the impact on their raw material supply chain.

Teerit Paowan, an analyst at research firm IDC Thailand, said for the near term of 2-3 months, chipmakers are unlikely to be affected as they have already prepared necessary materials in advance.

"But if the situation is prolonged, this will affect the supply chain," Mr Teerit said.

The Russia-Ukraine war will not lead to oil scarcity in Thailand, but whether prices stop soaring depends on various factors other than the economic impact of the war, said Auttapol Rerkpiboon, chief executive of national oil and gas conglomerate PTT Plc.

Petroleum sources are located far from battle areas, he said, echoing permanent energy secretary Kulit Sombatsiri who said the authorities have not seen an impact on oil and liquefied natural gas (LNG) imports.

Thailand mostly buys crude oil from the Middle East, which accounts for 55% of the total, and imports only 3% from Russia.

Mr Auttapol said Thailand has enough oil supply, but prices will depend on what happens next. If the US lifts some sanctions against Iran, there may be additional oil exports from that country, helping to cool global prices, he said.

The surge in global oil prices, which passed $100 a barrel late last month, has already caused some small oil retailers in Thailand to adjust retail prices.

No one knows exactly how much global oil prices will skyrocket in 2022, but in terms of yearly average, the Dubai reference price is expected to stand at $81-86 a barrel, up from $69.2 a barrel last year, said Mr Auttapol.

In the gas segment, the US and its allies' sanctions on Russia, together with decisions by British oil and gas company BP Plc and US energy giant Exxon Mobil Corp to withdraw their investments from Russia, will cause some "psychological effects", leading to higher LNG prices, he said. 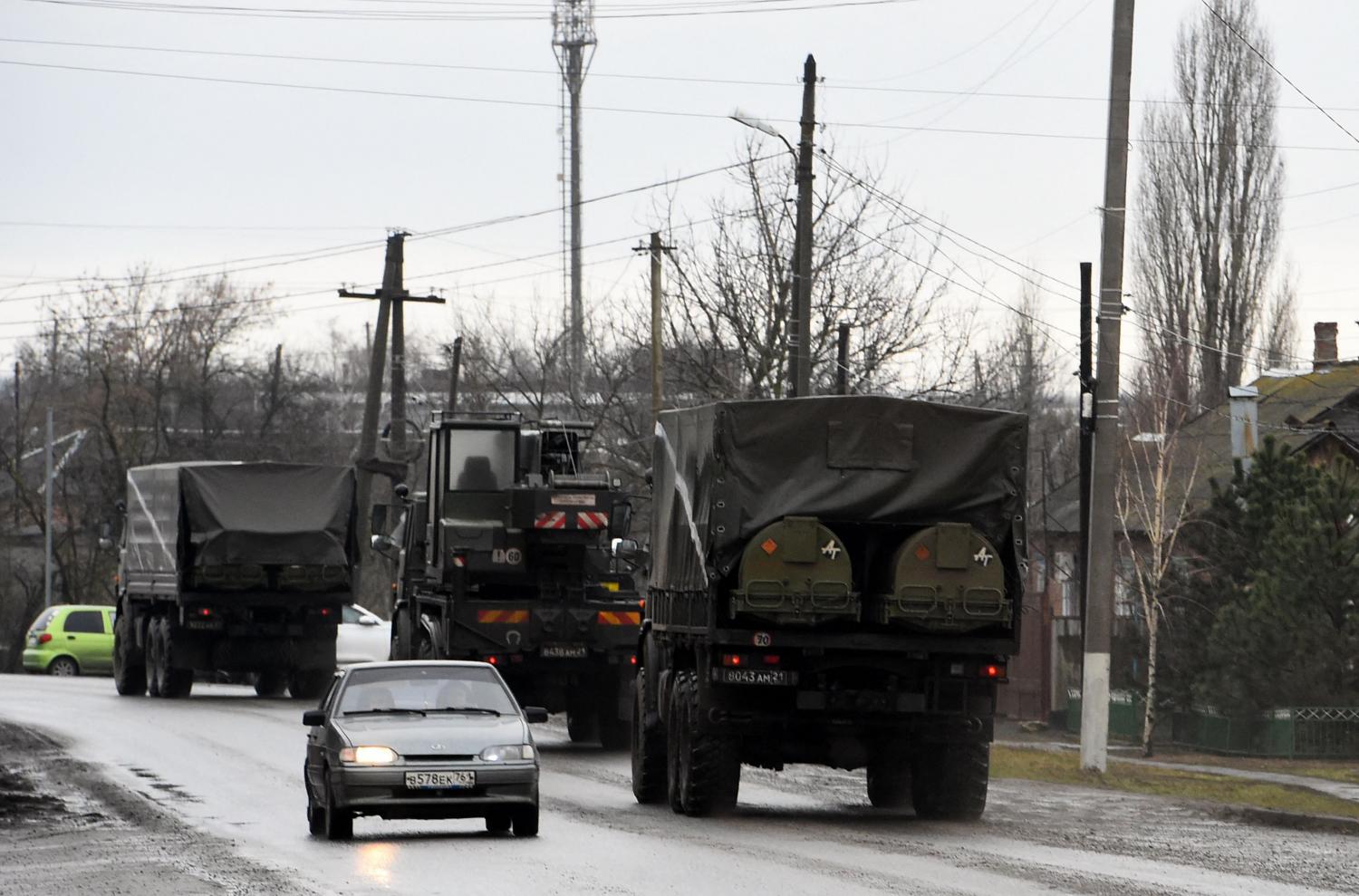 Russian military vehicles move on a road in the southern Russian Rostov region on Feb 24. AFP

Though the war has yet to affect global supply chains, some industries, notably steel and animal feed, may soon feel the pinch, said Kriengkrai Thiennukul, vice-chairman of the Federation of Thai Industries.

Russia is a major steel producer and exporter as well as a key maker of wheat and corn used to feed animals.

"The prices of these raw materials have begun to increase," said Mr Kriengkrai, who is also chairman of the Thai-Russian Business Council. "These higher prices will lead to higher food prices and affect infrastructure development projects in many countries, leading to higher costs."

Thailand could face an indirect impact from higher raw material prices, he said.

However, Mr Kriengkrai expects conglomerate Charoen Pokphand Group to escape any serious economic impact from the conflict as its "feed-farm-food" business in Russia focuses on the domestic market. The business covers feed manufacturing, animal farming and ready-to-eat food production.

In the export sector, Thailand's shipments to Russia and Ukraine account for only 0.38% and 0.02% of the total, respectively.

Overall exports may experience problems in the future as soaring oil prices will increase transport costs, including higher freight rates and container expenses, he said.

Commerce permanent secretary Boonyarit Kalayanamit said key transport networks and ports in both Ukraine and Russia may have to be paused if the war is prolonged.

"The private sector has proposed Thai product shipments change transit routes through third countries such as China for shipments to Central Asia and Europe," he said. "We agreed to this proposal and will try to negotiate with the Chinese government to reduce trade obstacles for Thai exporters transiting products by land."

Normally transit and transshipment are allowed under the World Trade Organization.

Sanan Angubolkul, chairman of the Thai Chamber of Commerce, said the chamber forecasts the Russia-Ukraine crisis will be prolonged. The chamber warns exporters of rising freight rates as shipping lines have started refusing to accept bookings on Russia-Ukraine routes and insurance companies are unlikely to cover transport of goods bound for those two countries.

Thai entrepreneurs should also pay attention when accepting purchase orders and payments during this period as there are potential payment stalemates after some Russian banks were barred from the SWIFT international payment system.

He does not expect local entrepreneurs will face a direct impact from the ongoing crisis, as bilateral trade between Thailand and the two countries is insignificant.

According to Mr Sanan, the following businesses are most likely to be hard hit by the conflict: animal feed; steel; car tyres; food and processed food; small businesses, especially cosmetics and jewellery as Russia is a major client; and tourism and services.

"In the short term, the direct impact is unlikely to be significant, but the indirect effect on Thailand is a key area of concern as the crisis will affect global oil prices. We expect global oil prices will exceed $120 per barrel, resulting in an increase of about 5-7.5 baht per litre in domestic oil prices," he said. "The indirect effect will eventually weaken overall consumer sentiment and cause consumers to be more cautious in their spending."

In the middle and long term, logistics problems may arise, possibly resulting in a shortage of containers, said Mr Sanan.

He advised the government to keep a close watch on inflation and exports, citing the two factors as important because they can affect the country's economic growth this year.