A global energy crunch is sending liquefied natural gas (LNG) prices skywards, but Thailand needs to ramp up its purchases to offset a steep production fall at its largest gas field and as sanctions threaten supplies from Myanmar.

The Southeast Asian country has little choice but join the scramble for alternative gas supplies at a time European demand is rising. Buyers there are rushing to secure cargoes to replace Russian gas and LNG as the Ukraine war intensifies.

The shortfall for Thailand, a net oil and gas importer who last year relied on imports for nearly 75% of its electricity, crude oil, coal and natural gas needs, could become more onerous as prices continue to soar.

Thailand's deficit is largely due to sharply lower output from the offshore Erawan field, which provides the lion's share of the country's gas needs. Threats of further United States sanctions on Myanmar following a military coup have also cast uncertainty over gas imports from the long-time supplier.

"We were dealing with a decline of gas in the Gulf of Thailand and potential sanctions in Myanmar ... now we are adding another situation of soaring gas prices from the Ukraine-Russia situation," Kulit Sombatsiri, permanent secretary for energy, said.

PTT Exploration and Production Pcl (PTTEP), a unit of state-owned energy company PTT Pcl, is due to take over the Erawan gas field from Chevron Corp in April and has been seeking to gain access to it since 2021.

Transitions between concessions on oil fields are often collaborative but delays in talks between PTTEP and Chevron come amid a dispute between the United States oil major and the government over who should pay for removing the offshore assets in the field.

About a quarter of Thailand's natural gas requirements used to come from the Erawan field, which is expected to produce less than a fifth of its capacity next month.

In 2021, 54% of the country's electricity used natural gas and a tiny fraction came from oil sources. It had planned to boost imports this year, but prices of the super-chilled fuel have doubled in just over a month because of sanctions on Russia over its invasion of Ukraine, which Moscow has called a "special operation".

When Chevron exits, production could be as low as 200 million standard cubic feet per day of gas (mmsfcd) before climbing to 400 mmsfcd in the fourth quarter, said SCB Securities analyst Chaipat Thanawattano.

State-owned PTT will import 1.2 million tonnes from the spot market in January to April because the situation was "urgent and required fast decisions," Mr Komkrit said.

Finansia Syrus Securities analyst Suwat Sinsadok said he expects the quota to be fully used up and he estimates it will take two years before Erawan reaches 800 mmsfcd - the Thai operator's production target.

A Chevron spokesperson said in an email: "Despite the complex challenges presented by the transition, we are committed to achieving the objective of a safe transition of Erawan in April 2022."

PTT declined to comment on its existing reserves, LNG imports and capacity of the Erawan field.

The average price for April delivery to Asia has pulled back to around $38 per mmBtu, after spiking to record highs on the risk of a cut-off in Russian gas.

Some power plants will switch to using oil to generate electricity to lower gas demand, Komkrit said, while the government was extending the closure of a coal power plant and biomass contracts.

"What we can do best is conserve energy ... so we can pass through these uncertain times," Deputy Prime Minister and Energy Minister Supattanapong Punmeechaow told reporters last week. Thailand imported nearly 90% of its oil needs last year. 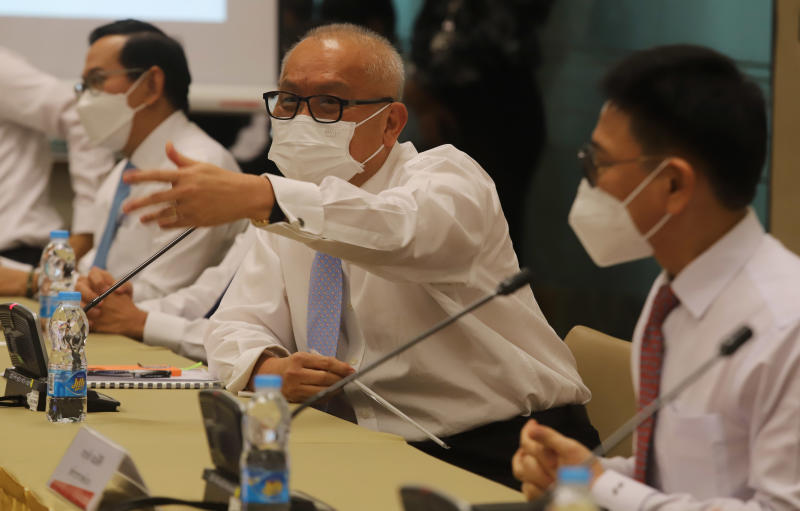 Potential sanctions over supplies from Myanmar, which accounts for about 14% of Thailand's natural gas needs, has also added to uncertainty.

"If that happens, we'll need to find replacement, but in the meantime, we've increased regasification capacity to be ready," Mr Komkrit said.

The government last week said it would commence partial operations at a regasification terminal six months ahead of schedule in May, adding capacity of 2.5 million tonnes per year (tpy) from 7.5 million tpy.

LNG has to be re-gased before it is used in power plants.

Declining fields in Myanmar would have a permanent impact on Thai LNG demand in the long term.

"We estimate this could increase Thai LNG imports by 2.3 megatonnes per annum by 2030," said Wood Mackenzie analyst Angus Rodger.