The capital adequacy ratio of banking system stands at 20% and lenders have increased provisioning against bad loans by 430 billion baht in the past two years, the BoT said in a statement. Total provisioning at 890 billion baht is equivalent to 1.6 times of non-performing loans, it said.

“This reflects bank vigilance against the backdrop of heightened uncertainties,” the central bank said. “Currently, the financial positions of the Thai banking system remain resilient with high levels of buffer.”

S&P Global ratings lowered ratings of Siam Commercial Bank and Kasikornbank to BBB from BBB+ and that of Krung Thai Bank and TMBThanachart Bank to BBB- from BBB, saying the move reflected its view “that systemic risks have increased for banks operating in Thailand.” The rating company affirmed ratings of Bangkok Bank and Bank of Ayudhya at BBB+ and also retained the stable outlooks for all the six lenders.

“Systemic risk for Thailand’s banks has risen, and high leverage among borrowers is likely to persist for longer than we previously expected,” S&P said. “Regulatory relaxation, such as a loosening of loan-to-value ratio requirements for mortgages, or an absence of any concrete action to rein in high household debt would delay a resolution of structural issues, in our view.” 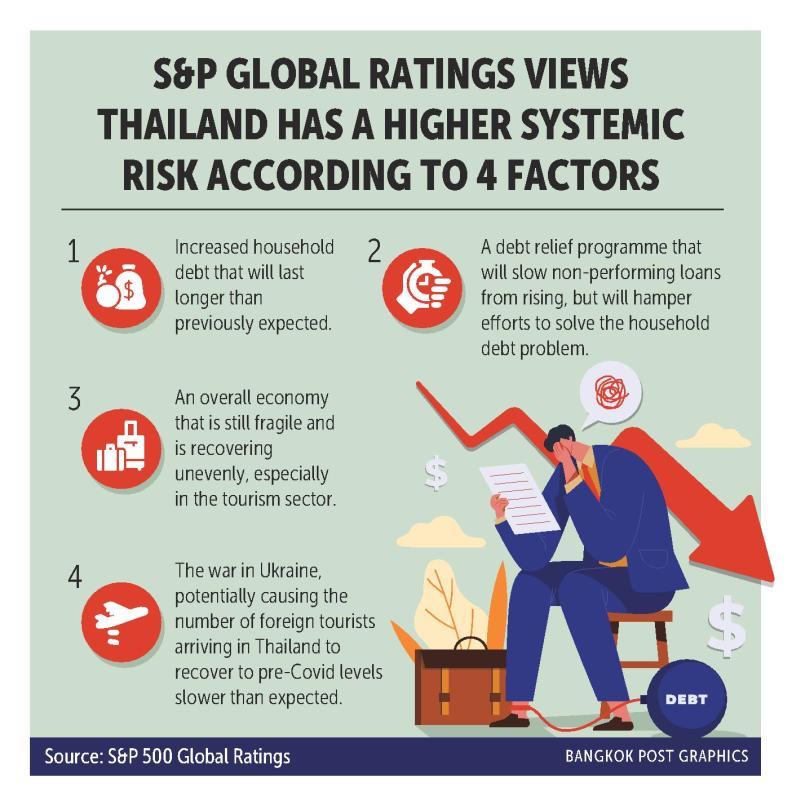 S&P’s base case scenario project bad loans ratio of banks jumping to 5% over the 24 months, the highest level since the 2008 global financial crisis, from 3% currently, it said.

But the central bank said regular stress tests on banks’ capital found that the “Thai banking system remained resilient and able to withstand future risks and uncertainties.” “Going forward, the continued recovery of the Thai economy will help improve income and debt serviceability of borrowers as well as the loan quality of banks,” the BoT said.

Various debt relief measures introduced by the central bank during the pandemic have been instrumental in bringing down the number of debtors under the financial assistance programme of banks to 14% of total loans from a peak of 30% during a surge in Covid-19 outbreak in July 2020, the BoT said.

“There is no immediate fix to the structural issues plaguing the country’s lenders and Covid-19 has only inflamed the situation,” S&P said in a statement. “The fragile and uneven recovery is exacerbated by the economy’s high dependence on tourism.”