Thailand's exports beat expectations by growing 16.2% in February, driven by higher international demand on the back of global economic recovery and proactive trade promotions. 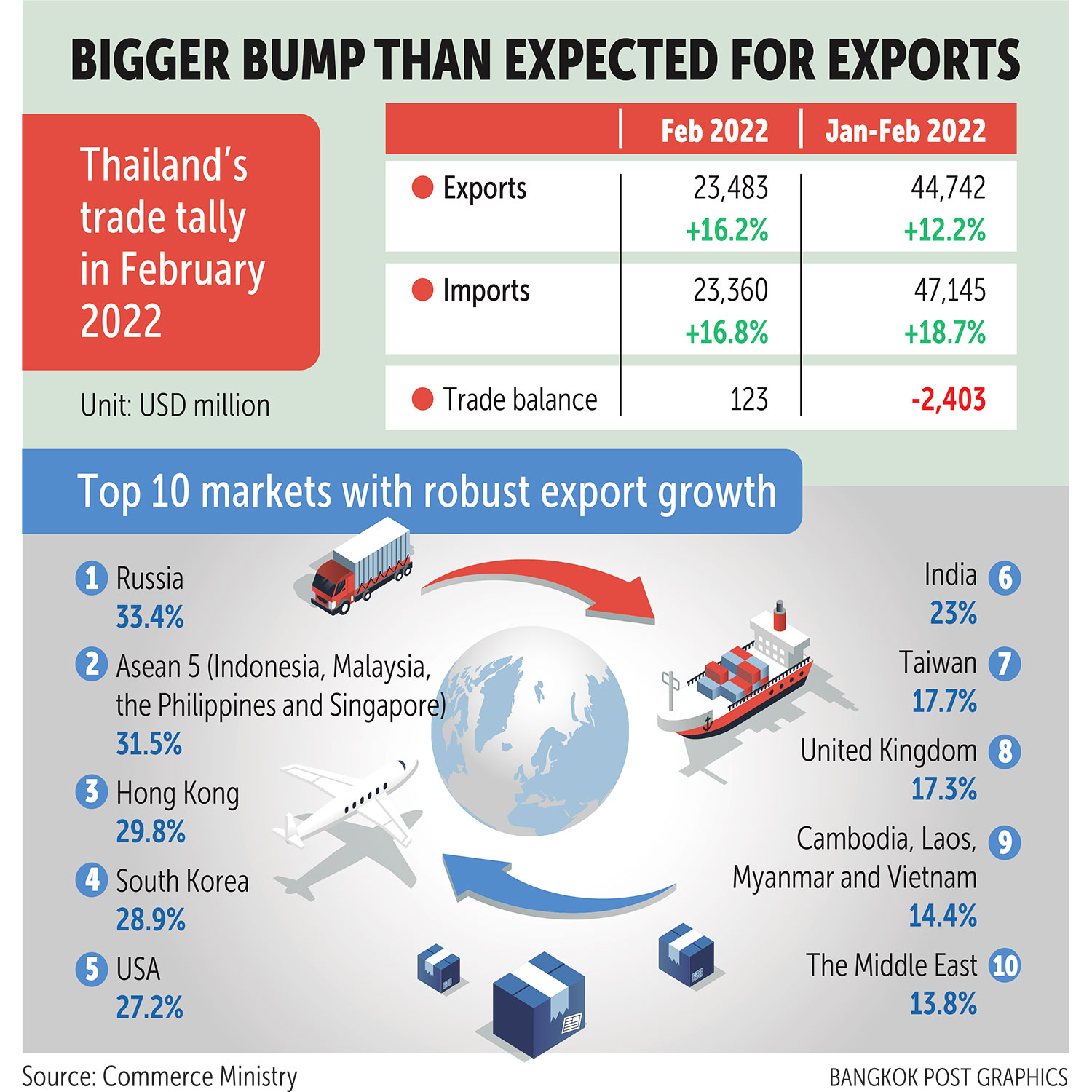 More importantly, the Russia-Ukraine war has yet to affect Thailand's international trade.

The Commerce Ministry on Thursday reported customs-cleared exports fetched US$23.48 billion in February, with imports rising by 16.8% to $23.35 billion, resulting in a trade surplus of $123.3 million.

Commerce Minister Jurin Laksanawisit said the war's impact on Thailand's international trade is likely to be seen clearly in March and April, which deserves close monitoring.

"The ministry has still maintained the export growth target at 3-4% this year, with key risk factors including rising oil prices from the conflict between Russia and Ukraine," Mr Jurin said.

In a related development, Mr Jurin said the ministry yesterday called a meeting of the joint public-private committee to boost exports, notably for rice, which is now in high demand.

The ministry believes Thai rice exports may exceed the 7-million-tonne target set by the ministry for 2022, partly driven by new markets such as Saudi Arabia.

Chookiat Ophaswongse, an honorary president of the Thai Rice Exporters Association, recently forecast that Thailand's rice exports would exceed 8 million tonnes this year, driven by the weakness of the baht and rising global demand.

Thai rice shipments reached 1.5 million tonnes in the first two months of this year, compared with 900,000 tonnes in the same period of 2021.

According to Mr Jurin, Thai exports to Saudi Arabia are also looking promising after 11 Thai chicken factories were given permission to export chilled and frozen fresh chicken to the Middle Eastern country, effective as of March 13, after 18 years of suspension.

The first chicken shipments to Saudi Arabia are scheduled for next week, he said.

According to Mr Jurin, the Commerce Ministry also aims to sign 11 deals to form deeper partnerships through "mini-free trade agreements" (mini-FTAs) this year, including with: Telangana, India; Gansu province, China; Gyeonggi province in South Korea; and Busan in South Korea.

The ministry has already signed two mini-FTAs with Hainan, China, and Kofu city in central Japan.

Poj Aramwattananont, vice chairman of the Thai Chamber of Commerce, said the impact on the country's international trade from the war in Ukraine is expected to become clearer in March, but the private sector is now increasingly worried about uncertainty and confusion created by the conflict.

He said such uncertainty and confusion may affect global supply and demand chains, possibly causing shortages of some raw materials.

"We have to closely monitor the fast-changing situation," Mr Poj said. "Thailand may see opportunities from the shift of the demand-side to Asian countries."