The Thailand Pavilion proved to be the most popular pavilion in the Mobility Zone and was the fourth most visited pavilion at the World Expo in Dubai. (Photo: World Expo 2020)

The Digital Economy and Society (DES) Ministry hailed the Thailand Pavilion at Dubai's World Expo as a success because it attracted more than 2.35 million visitors, which accounted for 9.8% of the fair's total visitor numbers, beating its original target of 7%.

DES Minister Chaiwut Thanakamanusorn said the Thailand Pavilion ranked as the most popular pavilion in the Mobility Zone and was the fourth most visited pavilion after Saudi Arabia, Pakistan and the United Arab Emirates, based on statistics collected by Google Public Review.

It showcased Thailand's potential and readiness in terms of technology and digital innovation to visitors from around the world, he said.

The minister said the Thailand Pavilion met its objectives and attracted more than 2.35 million visitors, who were also impressed by Thai arts and culture presented through more than 900 rounds of daily performances and cultural exchange shows.

The pavilion featured a series of special activities organised by alliances and provided a business matching platform that expanded opportunities for Thai business entrepreneurs, he said.

Thailand Pavilion welcomed international visitors, including members of the royal families of the UAE, government leaders, representatives from international organisations, executives from leading corporations as well as visitors from all over the world.

Furthermore, the Thailand Pavilion received an Honourable Mention in the Editor's Choice Award category from Exhibitor magazine, which has been widely recognised within the exhibition industry worldwide for more than 30 years, Mr Chaiwut said. 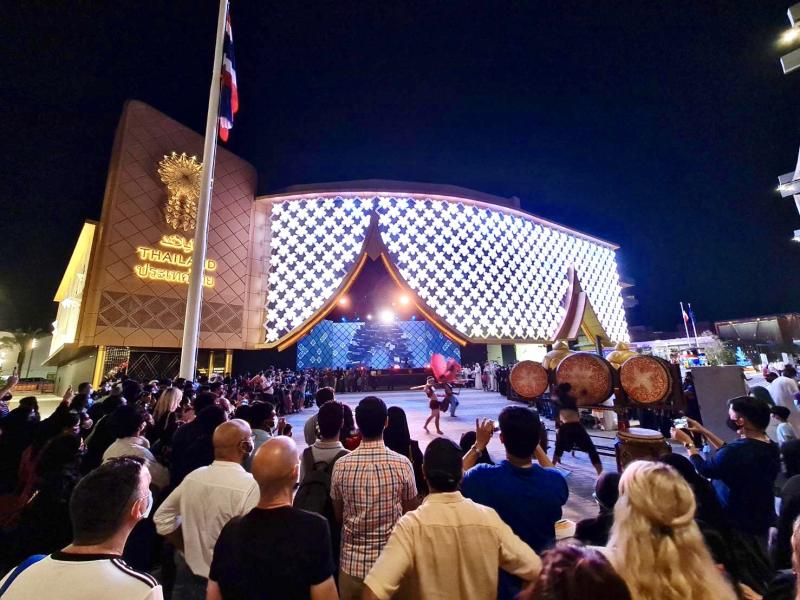 (People watch a performance at the Thai Pavilion at the World Expo in Dubai. (Photo: World Expo 2020)

A visitor survey also revealed that 82% of visitors preferred the Thailand Pavilion to the other pavilions, while 92% said they wanted to travel to Thailand after visiting the exhibition, he said.

Mr Chaiwut said the achievement at the expo is expected to lead to new opportunities and create concrete cooperation with other countries soon.

Nuttapon Nimmanphatcharin, president and chief executive of the Digital Economy Promotion Agency (Depa), a key government agency responsible for organising the Thailand Pavilion, indicated the event opened the door for Thai entrepreneurs and startups to boost their business opportunities in the Middle East. They also received great responses from attendees.

Additionally, the pavilion highlighted products and digital innovation created by Thais with the support of leading corporations, he said.

The expo provided a platform for Thailand to strengthen relations with other countries and created opportunities for Thailand to exchange and discuss cooperation projects, boosted the confidence of foreign visitors, and exhibited the country's readiness towards digital transformation and the digital economy, Mr Nuttapon said.

KABUL: The death toll of a suicide bombing on a Kabul classroom has risen to 35, the UN said on Saturday, as Shia Hazara women who bore the brunt of the attack staged a defiant protest against the "genocide" of their minority community.