The way we live and how we think about home is changing, and that's a welcome challenge for Minor International real estate chief Micah Tamthai.

Layan Residences, a boutique collection of 15 private pool villas, is one of the luxury residential properties that Minor International has developed on Phuket. Photo courtesy of Anantara Layan Phuket

Micah Tamthai loves travelling. His most recent adventure was a three-week road trip through the western United States last September after travel restrictions were eased.

Starting in Los Angeles, where he stopped to spend time with his youngest brother, he drove his rented car along the famous Highway 1 that hugs the scenic Pacific coast of California. His northward journey took him to San Jose and Palo Alto and then a stopover to meet old college roommates in San Francisco. Then he crossed Nevada, headed east through Idaho, Wyoming and South Dakota and ended up in his Minnesota home.

"I managed to go and come back without getting Covid," he quips.

Though he grew up in Thailand, the US is arguably his first home as he was born there and later spent almost 20 years completing undergrad and graduate degrees in electrical and industrial engineering respectively in the state of Pennsylvania. Later he started working in the airline industry for US Airways and Northwest Airlines, which is headquartered in Minnesota.

In the early 2000s, the US airline industry lost over US$30 billion, partly due to the 9/11 terrorist attacks, forcing many companies including Delta, Northwest, United and US Airways to file for bankruptcy protection until they could restructure their businesses.

Mr Tamthai decided in 2009 to change course and pursue new career opportunities in Thailand. He joined Minor International, one of the largest multinational hospitality companies in Asia, and now serves as acting CEO and chief operating officer of Minor Real Estate and Lifestyle.

"My whole working life, it has all been in the hospitality industry," Mr Tamthai notes.

The timing of his arrival at Minor was good, as the company was already well established as a hotel and restaurant operator in Thailand and had been steadily building its presence abroad, while also looking at new approaches to real estate. "When I first joined we were still very small and very Thailand-focused but with the team and leadership we have, we managed to expand quite fast over the last 10 years," Mr Tamthai recalls.

Listed on the Stock Exchange of Thailand, Minor International (MINT) now has a footprint on every habitable continent, with operations in 63 countries. It has three main business units, with hotels accounting for 58% of its revenue, restaurants and food 36% and lifestyle products and services 6%.

Mr Tamthai started working on the investment and acquisition team at Minor, which had only about 20 hotels at the time. As of the end of 2021, it had 527 hotels worldwide with more than 75,000 rooms.

"My assignment was to grow our hotel business, so we did a lot of acquisitions. We built a bunch of new hotels and throughout the process, we realised that besides doing pure hotel operation, there is an opportunity to do real estate or mixed-use projects too," says Mr Tamthai.

Residences, shopping centres and serviced apartments can add value to hotel properties and he was keen to explore this business model further.

His first project was the St. Regis Bangkok Hotel and Residence, with 53 luxury residences built on top of the hotel located in the heart of the capital. "It took us two and a half years to sell all the residential units," he says. "It was also considered the first branded residence in Thailand. This was back in 2011.

St. Regis was the starting point for more similar projects. Over the next 10 years, the job took Mr Tamthai to almost 40 countries including Australia, Indonesia, the Maldives, Sri Lanka and 10 different countries in Africa.

"On a personal level, I got to see a lot of the world. Lots of countries, lots of cultures that maybe if I was just a tourist travelling, I might not have been able to see," he says.

"Not only was I able to see, but I could actually see [projects] come to fruition." 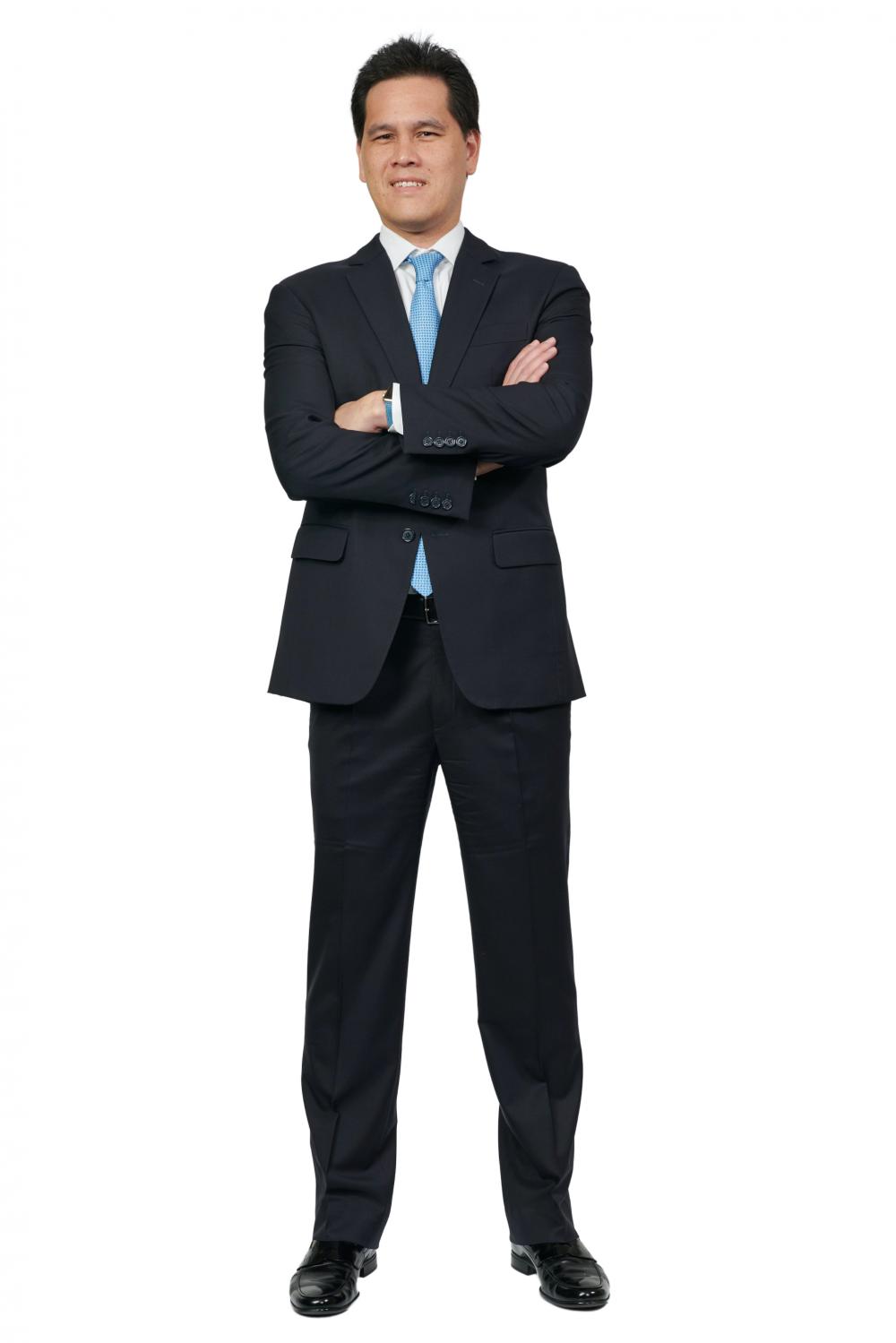 While many sectors have been experiencing upheavals because of uncertainties caused by the pandemic, the luxury residential market is still relatively healthy, as billionaires with deep pockets remain undisrupted by Covid-19 for the most part.

Last year, Minor's resort-branded residences in Phuket -- Layan Residences and Avadina Hills under the Anantara brand -- broke a record by selling eight separate villas worth a total of 2.5 billion baht.

Well-off people will always travel, whether it's for business or leisure, but Covid-related measures including flight bans and lockdowns have disrupted everyone's travel patterns. Unable to visit their other residences abroad, the rich have been looking domestically. And since most wealthy buyers in Thailand are Bangkok-based, they were looking for other locations for a second home.

Phuket easily tops the list of choices given its world-renowned natural attractions, international airport and other infrastructure to cater to holiday makers and property investors alike.

Looking at the holiday island from the perspective of a real estate developer, Mr Tamthai saw that Phuket offered Minor room for expansion as the company didn't have any residences there yet. It is far bigger than its counterpart to the east, Koh Samui, where Minor already operates four hotels. The always-on demand from buyers made Phuket a perfect choice to pursue a new business opportunity.

When it comes to purchasing a property, Mr Tamthai says the process ultimately involves more than just the person whose name is on the title deed. Parents, children, grandparents and even pets all get taken into into account.

"It's many generations of family members looking together for a place where it's not just a one or two bedrooms, but a larger house."

With its roots in the hospitality industry, Minor embraces a strong service culture, which allows the company to distinguish itself from other residential developers, in Mr Tamthai's view.

Hotel hospitality is on offer at Layan Residences, a boutique collection of 15 private pool villas, and at Avadina Hills, 11 ultra-luxury residences with an initial price of 300 million baht. It shows in the range of amenities offered: restaurant, gym, spa and wellness facilities, to name a few.

"Nowadays most buyers want services. Besides buying a property with a good location and a good product, they also want good services," says Mr Tamthai, adding that younger purchasers are especially interested in the added value that services can bring.

As an operator in a niche market for luxurious and super-exclusive branded residences, Minor knows it needs to do its utmost to make its offerings attractive to prospective buyers.

That's why its branded residences can be bought as freehold, says Mr Tamthai, something that makes Minor stand out as most other residences are marketed as leasehold properties. "It's one thing that we studied before we launched our development -- how do you try to be unique and different from everybody?"

Human behaviour has changed significantly over the past two pandemic years. For millions of people, having to work from home -- not to mention having to do most of their shopping and food ordering from a screen -- has made them re-evaluate their living spaces and lifestyle needs.

"Buyers' preferences are different now. They want more space," says Mr Tamthai, adding that properties that are close to each other and small are not preferred as much as they used to be.

The ideal residence in the post-pandemic era should offer a large space with "more privacy … more greenery -- a bit more with nature" where owners could be by themselves.

A report from Savills, a UK-based multinational property agency, says that for many, residential space is no longer for relaxation but also for work space. "Homes need to be bigger to accommodate working at home, or having a pet as a companion, for example," it adds.

When buying a house, buyers not bring their personal perspective but also an investment view, notes Mr Tamthai, adding that they will look for a house with land that will increase in value in the long run.

And while many countries have been lifting Covid-linked restrictions and international travel is steadily resuming, Mr Tamthai sees lingering uncertainties on the path to recovery.

"We think we're close to the end … but there's also uncertainty -- for example right now with the Russia-Ukraine conflict" which is affecting oil prices, consumer goods and travel, making people think twice about taking trips abroad.

"At the end of the day with all these uncertainties, people still want comfort. They want to be near home, their family, their loved ones," he says, adding that this will affect investment choices as buyers will look to have assets that are accessible to them whenever they want.

"I still see that over the next two or three years, most of our customer base will still be Thailand-based, especially on the real estate side."

While real estate has been his main responsibility at Minor, Mr Tamthai has recently taken on another role in the lifestyle business of Minor International. That involves overseeing around 400 retail outlets in Thailand for international brands like Charles and Keith, Esprit, Bossini and Anello.

The journey so far has been fun and challenging. And for him, challenges present themselves as opportunities, not roadblocks. The leadership approach he espouses is to encourage team members to contribute ideas, not just listen to orders from on high. "I don't like micromanagement either," he adds.

Mr Tamthai says he tries to "give everybody their space to operate within their function. For me, the key thing is to love what you're doing. Have fun and work hard."

Hitting roadblocks is normal when doing business. "It's okay to make mistakes. You learn from it and move on," he adds. "Next time when we strategise, try to not repeat it. We learned from that and can use that in our new direction or new strategy."

He also wants to make sure to pass down the knowledge he's learned from Bill Heinecke, the founder of Minor International.

Another role he stepped into three years ago was as a guest lecturer at Chulalongkorn University. Given his family background, it was something he had always wanted to try someday.

Though being in charge of two businesses and one part-time role keeps him heavily occupied, Mr Tamthai says he never gets stressed out. "Coming to work, I kind of do the most I can, the best I can. Later you leave everything you do in the office."

It all comes down to his effort to separate work and non-work life to create a good balance. "You can work as hard as you want but you have to either get enough sleep or know how to slow down a little bit." A short trip out of town to Chiang Mai, Samui or Phuket is how he unwinds.

In a parallel world where all restrictions are lifted, Mr Tamthai would like to pay another visit to Africa. "I especially like our safari camps in Kenya and Tanzania" -- two places known for their vast plains and diverse wildlife.

"It's very peaceful, very quiet. … Some places we don't have internet or WiFi or TV, but I think it's very different from everything else that we see in the world. That would be probably the first place I would go to." 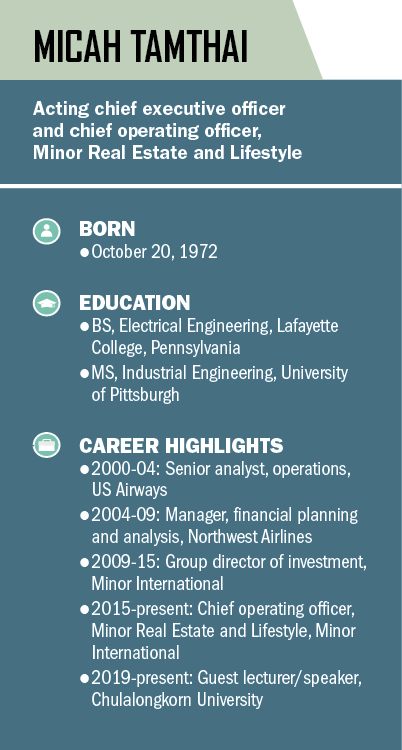