Founder of Sunac China Fights to Save His Property Empire
Business

Founder of Sunac China Fights to Save His Property Empire

Apartment buildings under construction at the Sunac Resort project in February. (Photo: Bloomberg)

More than a decade ago, Sun Hongbin was forced to sell his property business to a rival after a Chinese government crackdown on soaring housing prices caused it to run short on cash.

The China-born businessman said he learned his lessons from the failure and made a comeback with another company, Sunac China. It sold apartments in mostly rich cities like Beijing and Shanghai and grew into one of the country's largest developers, with the equivalent of more than $93 billion in contracted sales last year.

Mr. Sun, a naturalized American citizen in his late 50s, is now trying to prevent Sunac from suffering the same fate as China Evergrande Group and other rivals that have spiraled into default following government-imposed curbs on borrowing.

Sunac's fortunes have changed drastically in just a few months.

As recently as last autumn, many investors -- and global credit rating firms -- viewed Tianjin-based Sunac as one of the nation's strongest private real-estate developers. But a selloff in Chinese property bonds and diminishing home buyer confidence have caused a prolonged market dislocation and industry slump that has imperiled many real-estate companies that previously raised billions from sales of dollar bonds.

The economic backdrop has gotten worse this year. In Shanghai, one of Sunac's biggest markets, a lockdown of the city's 25 million residents has halted apartment presales, an important source of cash for developers.

Sunac's contracted sales in March plunged 54% from a year earlier, following a 33% decline in February.

Last week, Sunac missed a $29.5 million interest payment on a U.S. dollar bond for the first time, and it is trying to cobble together funds within a 30-day grace period to stay afloat, according to people familiar with the matter.

The company also didn't meet a March 31 deadline to release its 2021 results, causing a trading suspension for its Hong Kong-listed shares.

Sunac's dollar bonds were recently bid at around 21 cents on the dollar, according to Tradeweb, levels that imply a default is highly likely.

Mr. Sun declined to comment through a Sunac spokesman.

Late last year, he reached into his own pocket and provided a $450 million interest-free loan to Sunac, demonstrating "his long term confidence and long-term commitment to the group," a company filing said.

In recent days, Sunac has also told offshore bondholders that the company intends to make its missed dollar-interest payment, according to people familiar with the matter.

"He has lost a company before, so he does not want the same thing to happen again," said James Wong, executive director and a fixed-income portfolio manager at GaoTeng Global Asset Management in Hong Kong.

"You can see that he is trying hard to repay, and is not laying flat," Mr. Wong added. 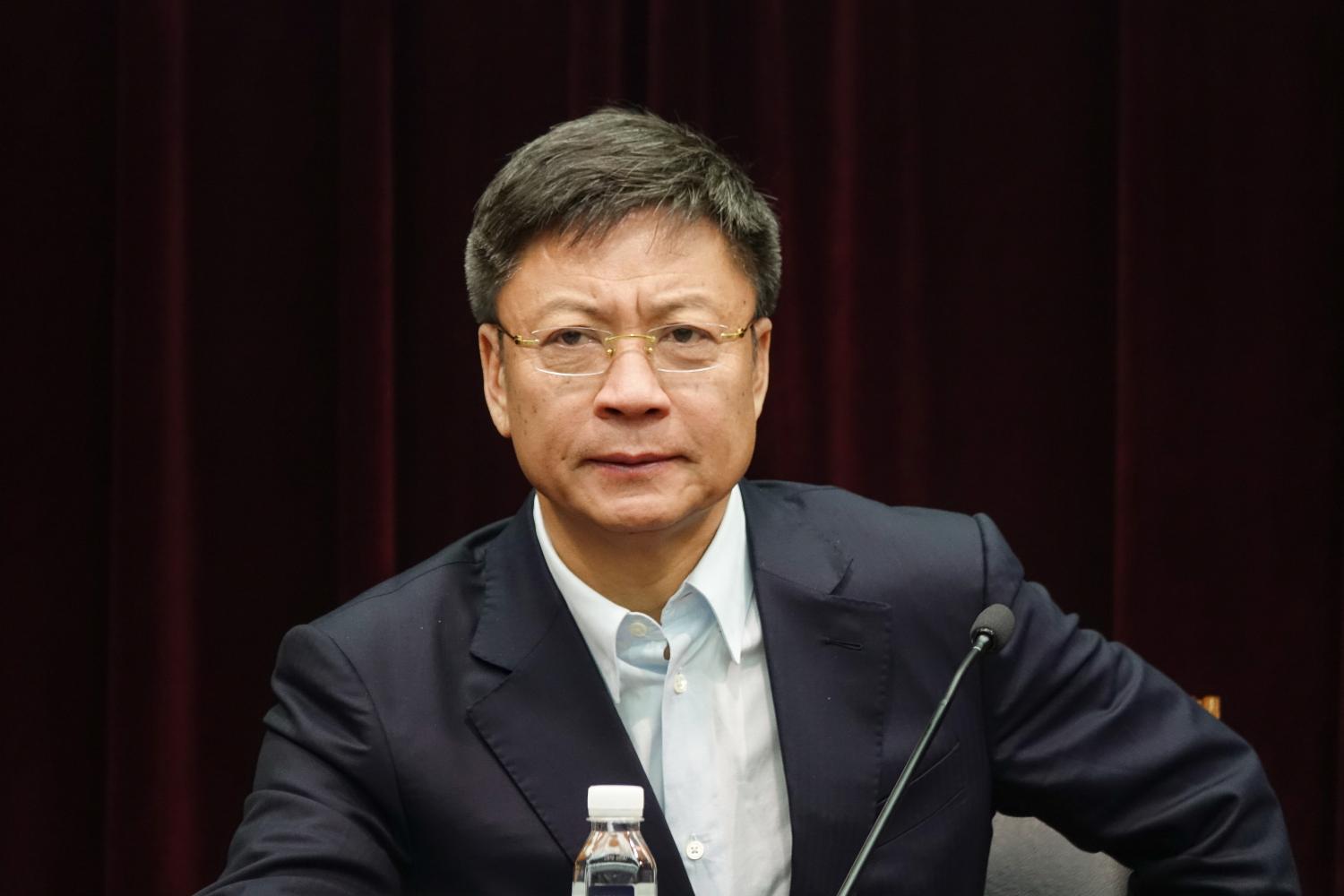 Mr. Sun is no stranger to adversity. In the late 1980s, after earning a master's degree in engineering from Tsinghua University in Beijing, he worked for the company currently known as Legend Holdings Ltd., which controls Chinese computer giant Lenovo Group.

Shortly after leaving the firm, Mr. Sun was convicted by a Beijing court of misappropriating 130,000 yuan, the equivalent of about $20,153, during his tenure, and sentenced to five years in prison.

He was released after about a year and a half and eventually managed to get his 1992 conviction overturned.

After leaving prison in 1994, Mr. Sun founded a residential developer called Sunco Group. It grew rapidly by scooping up land and building middle-income housing in Tianjin and more than a dozen other cities, while borrowing heavily in the process.

Average selling prices of homes nearly doubled over the next decade, according to data from China's National Bureau of Statistics. By 2005, however, Beijing had rolled out many measures to cool the market.

Sunco's liquidity became constrained, and to prevent the company from collapsing, Mr. Sun sold most of it to a Hong Kong-based developer in 2006 and 2007.

"A failure is a failure, and there is no need for an excuse. We've made mistakes in areas such as cash-flow management and expanding too fast," he mused on Chinese social media some five years later, referring to Sunco's issues.

Mr. Sun shifted his attention to Sunac, which he founded before Sunco was sold, and rode the wave of another housing surge in China.

By focusing on high-end residential compounds -- with gyms, cinemas, swimming pools and manicured gardens -- in economically prosperous cities, Sunac's contracted sales grew from the equivalent of $3 billion in 2011 at current exchange rates to nearly $90 billion in 2020.

Mr. Sun, who used to be a prolific blogger on Weibo, documented some of the company's milestones.

"I received a call from an investor this morning," he wrote one day in January 2012, the day after Sunac said it would buy a majority stake in a property development project from a rival.

The investor had wondered about Sunac's cash position and whether it was stable.

"I said that there is no need to worry about cash flow. I won't trip over the same stone twice," Mr. Sun wrote.

That same year, he also mused that "doing business in the real-estate market is like planting crops. When the weather is good and the rain is timely, we will all have good harvests. In droughts or floods, there can be no crops."

In 2017, Sunac was flush with cash and spent billions expanding into the entertainment and tourism industries.

It paid $9.3 billion for the hotel and theme park assets of Chinese conglomerate Dalian Wanda Group and invested in a company that mainly does film production.

Mr. Sun predicted that "with upgrades in consumption, industries such as big culture, big tourism and big entertainment will grow explosively."

Sunac ranked as China's third-largest developer by contracted sales at the end of last year, according to CRIC, an industry data provider.

Mr. Sun's fortune also swelled to more than $9 billion in 2021, according to Forbes.

Sunac's borrowings, meanwhile, also grew to $47.5 billion by June 2021 thanks in part to a flurry of bond sales in the preceding years and the company's acquisitions.

Then, in September, market sentiment changed. A document circulating online appeared to show a request for government help to ease liquidity issues at one of Sunac's subsidiaries. Sunac quickly said the leaked letter was a draft that was never sent. In the next few months, its shares and bonds tumbled further.

Sunac moved quickly to sell assets and has so far raised more than $3 billion by selling assets including a minority stake in New York-listed Chinese real-estate brokerage Ke Holdings Inc. and part of its ownership in a property services business.

It has also transferred shares in some projects working on unfinished properties to state-owned developers and trusts.

But no developer can stay in business for long with borrowing channels shut, sales dropping precipitously for months and facing a wall of debt maturities creeping up.

This month, Fitch withdrew its Sunac rating after slashing it to CC, which is one level above default. It said the company has billions of dollars in debt coming due this year and "diminished investor confidence" could further limit its access to funding.

Yao Yu, founder of YY Rating, a Chinese independent credit research firm, said if Sunac ends up in default and has to enter a long and complex restructuring like Evergrande, that could have a bigger negative impact on market sentiment because it had been managed a lot more prudently, yet it became a casualty of the market downturn.

"Mr. Sun is a person with integrity, but all Chinese private developers have built up leverage in the past, and are now facing the same liquidity problem," Mr. Yao said.