Thai exports remain robust, with their performance hitting a 30-year record high in March, leading the country's outbound shipments to grow by 14.9% year-on-year in the first quarter of 2022.

The Commerce Ministry on Tuesday reported that the customs-cleared value of Thai exports in March 2022 grew by 19.5% from the same month of last year to US$28.8 billion (922 billion baht), the highest level attained since records began in 1991, with imports increasing by 18% to $27.4 billion resulting in a trade surplus of $1.45 billion.

Exports from the real sector (excluding gold, oil-related products and weaponry) continued to expand for thirteen consecutive months by 8.9%.

Products that recorded strong growth in March included goods that benefitted from the rise in energy and commodity prices such as iron, steel and their products, crude oil, refined oil, chemicals, plastic resins, and rubber tires, as well as agricultural and food products, as foreign demand increased as people stocked up on essential goods amid the Russia-Ukraine war, particularly rice, cassava products, sugar, processed chicken, canned and processed seafood, palm oil, pet food, and condiments. 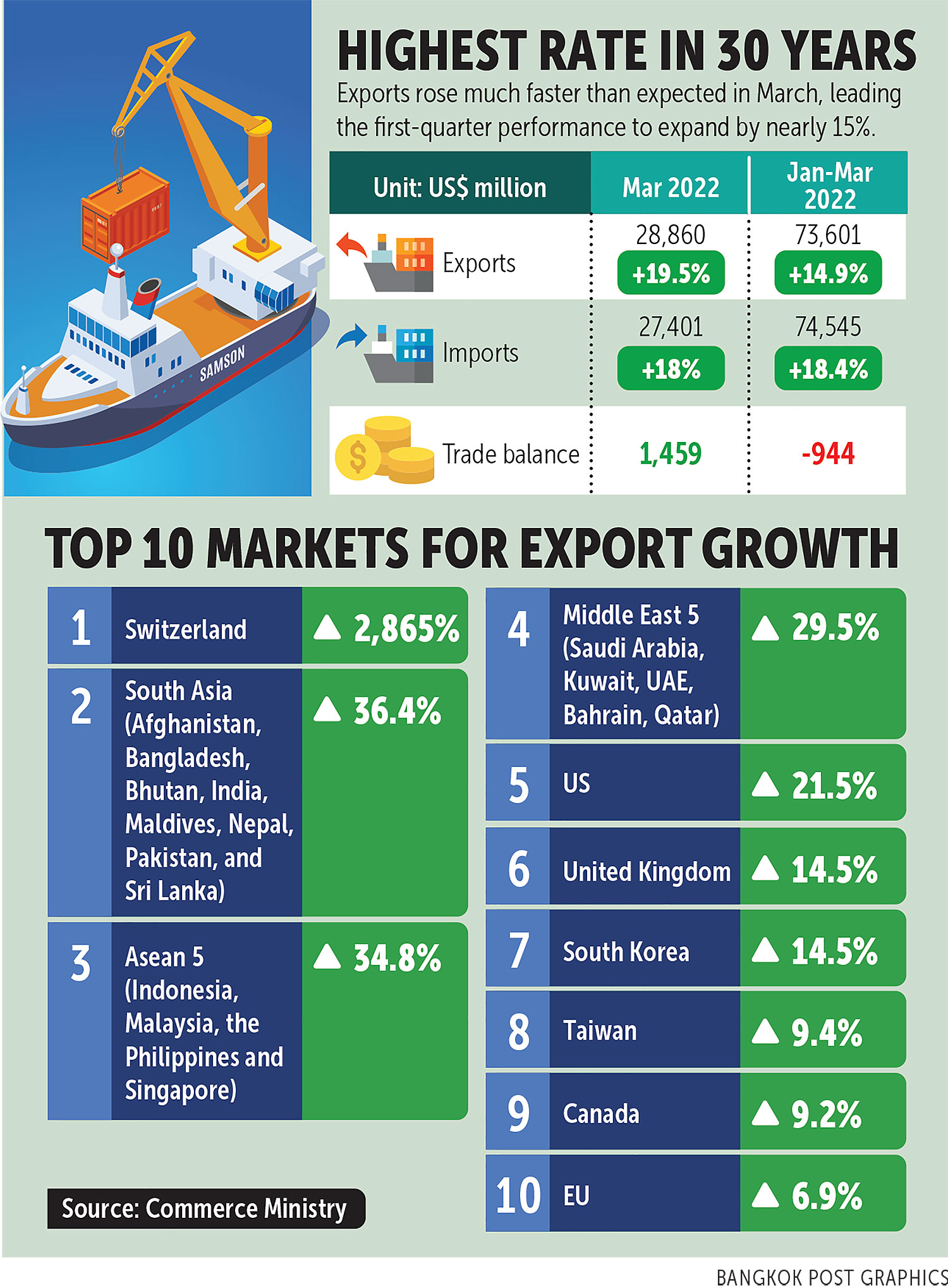 "Such an expansion derived from robust global demand, partly from an improvement in the Covid-19 situation," said Commerce Minister Jurin Laksanawisit. "The impact of the Russia-Ukraine conflict on Thai exports was quite limited due to the small shares both countries have in terms of Thai exports."

According to Mr Jurin, Thai exports in 2022 are expected to expand continuously as the impact of the Russia-Ukraine conflict -- including sanctions against Russia -- on Thai trade is quite limited due to the small share of trade between Thailand and both countries. Various supporting factors include the opportunity to export more agricultural and food products to ensure food security in many countries as well as the opportunity to be a substitute for Russian and Ukrainian products. The utilisation of free trade agreements such as RCEP, along with the restoration of Saudi Arabia–Thailand relations would benefit Thai exports, especially in terms of rice, fresh, chilled, frozen and processed chicken, processed seafood, along with automobiles, equipment and parts.

Other supporting factors include the rising trend in food and commodity prices which would likely lead importers to accelerate imports in order to reduce the risk of volatility and higher prices as well as the depreciation trend of the Thai baht which is conducive to exports.

Chaichan Chareonsuk, president of the Thai National Shippers' Council (TNSC), said despite March's export surge, the council remains concerned about the prospects of certain key industries such as automobiles, equipment and parts and rubber products. Exports in these two sectors fell by over 10% and 13.4%, respectively, in March.

Export growth in certain key export markets such as China, Japan and the EU also shrank. This warrants a close watch, he said.