A pump attendant prepares to refill a car's tank at a petrol station on Nawamin Road. The price of diesel is rising as the government raises the 30-baht-per-litre price cap. (Photo: Varuth Hirunyatheb)

The government's decision to reduce financial pressure on its coffers by allowing the price of diesel to gradually increase starting from this month -- having been capped since October 2021 -- will result in households and businesses experiencing a harsh economic reality.

In reducing the diesel price subsidy amid a surge in global oil prices, higher production costs, weaker consumer purchasing power as well as a higher rate of inflation are inevitable consequences.

Delivery businesses accept the government's decision to increase the 30-baht per litre cap on the price of diesel will take a toll on logistics costs and are seeking ways to minimise the impact, including the deployment of electric vehicles (EVs).

Alex Ng, chief executive of Kerry Express, said the move puts more pressure on logistics costs, but he believes the hike will be more critical for its rivals than for Kerry.

He said Kerry achieved a 12% improvement in delivery cost efficiency by embracing smart routing through data analytics for its trucks and motorcycles. The move helps offset surging fuel prices.

According to Mr Ng, the company is accelerating its acquisition of EVs from China, the US and Europe to use them in Thailand.

"We will make sure our drivers' benefits remain intact despite surging fuel prices," he said.

As to the prospects of the firm increasing delivery service charges amid rising fuel prices, Mr Ng had no comment.

The firm is also ramping up efforts to increase its business partners to receive more packages, aiming to pursue an economy of scale, he said. 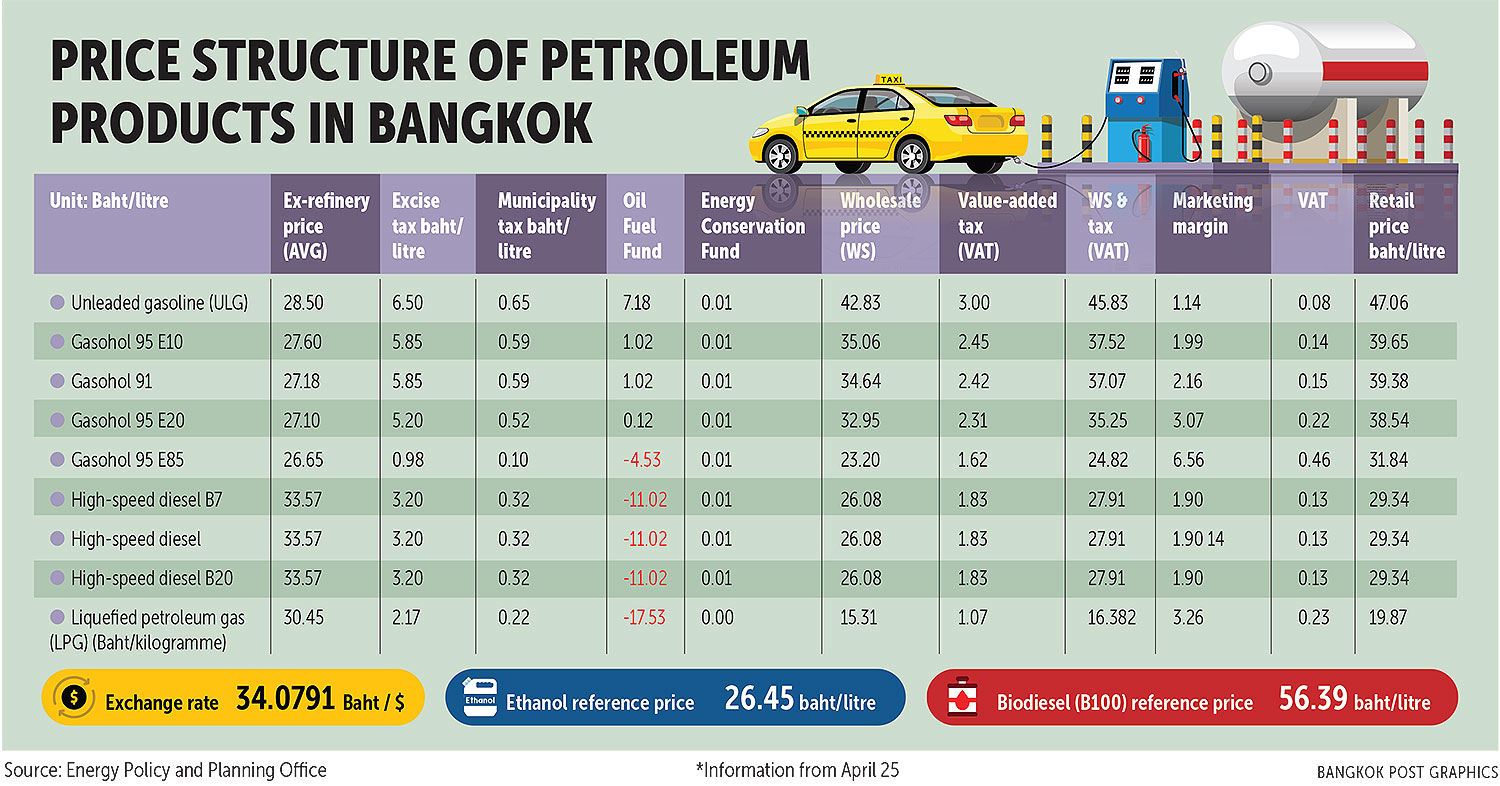 If the price of diesel increases by one baht per litre, operators will face a cost increase of 5-10%, said Mr Wasuchet.

He said the government should maintain the diesel price cap at 30 baht per litre until the end of this year, which would coincide with the period when tourism might rebound.

"Operators expect a new flow of international tourists after the recent removal of the Covid test requirement on May 1, as the domestic market alone is not enough for tour buses to stay afloat. The surging diesel price is an issue of great concern," Mr Wasuchet said.

Prices of tour packages for inbound travellers might rise by 20% from pre-pandemic rates because of soaring commodity and fuel prices. Higher prices will affect tourists' decisions when considering trips to Thailand, he said.

Some 20,000 tour buses have been permanently taken out of service as operators can no longer afford the maintenance costs without income.

He said operators want financial assistance such as soft loans to prepare their vehicles and upgrade safety standards, which costs around 300,000-500,000 baht per bus.

Mr Wasuchet said the government could help by arranging for vocational training schools or technical colleges to provide mechanical checks for the buses before letting them hit the road again.

The Federation of Thai Industries (FTI) warns the government faces a perfect economic storm if it does not extend the diesel excise tax cut while reducing the diesel price subsidy on May 1.

Authorities halved the tax, which is usually levied at 5.99 baht a litre, for a period of three months to help keep the domestic diesel price at 30 baht a litre. However, the tax reduction is scheduled to end on May 20.

The government plans to limit its diesel subsidy, made through the Oil Fuel Fund, by allowing the price of diesel to increase by two baht per litre, according to media reports late last week, citing a source at the Energy Ministry.

It remains unclear whether policymakers will extend the diesel excise tax cut for another three months, as proposed by the FTI.

"If the government does not approve the tax reduction extension at the time the subsidy is reduced, it will certainly face a perfect storm," said Kriengkrai Thiennukul, chairman of the FTI.

A source at the Finance Ministry who requested anonymity said the ministry might extend the tax reduction period, but the reduction rate would be changed to 1.5 baht per litre, instead of around 3 baht per litre at present.

The FTI said it is aware of the huge financial burden shouldered by the government. Without the tax cut and subsidy, it is estimated the price of diesel would be 41 baht a litre.

The global surge in oil prices is blamed for higher manufacturing costs. The surge also threatens to drive up Thailand's inflation rate to 5-7%, in line with a projection made by the IMF, which expects inflation in developing countries and emerging markets to average 7-8%, said Mr Kriengkrai.

Amid pressure from soaring energy prices, Thailand is also plagued by a huge level of household debt, which has increased to 90% of GDP. 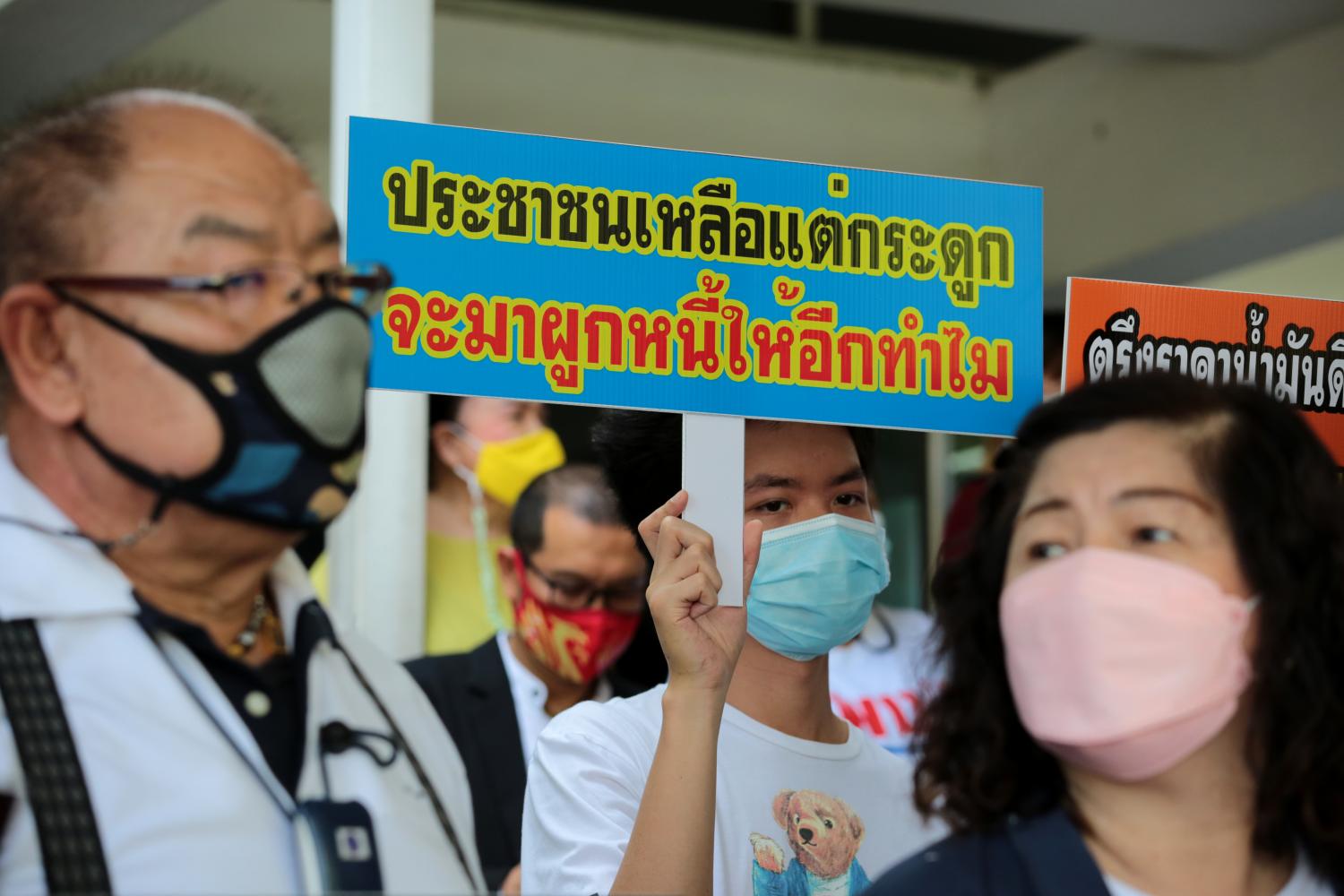 Land Transport Federation of Thailand representatives urged the state on April 27 to continue the diesel price cap at 30 baht per litre for all of 2022. Chanat Katanyu

In a typical economic environment, the public would understand and not criticise the government if it adjusted domestic diesel prices, he said.

"But Thailand is not in a normal situation now. The country has already been bruised by Covid-19 and the impact of the Russia-Ukraine war," said Mr Kriengkrai.

The industrial sector has braced for the period following Labour Day when oil, gas and electricity bills will increase, he said.

Manufacturers are trying to reduce costs and better manage their stocks of raw materials. They are seeking new markets to buy raw materials to ensure continued production, especially in the food industry, said Mr Kriengkrai.

Some manufacturers that cannot deal with higher costs, especially in the chemical fertiliser and animal feed industries, are expected to push the burden on to consumers, said Mr Kriengkrai. 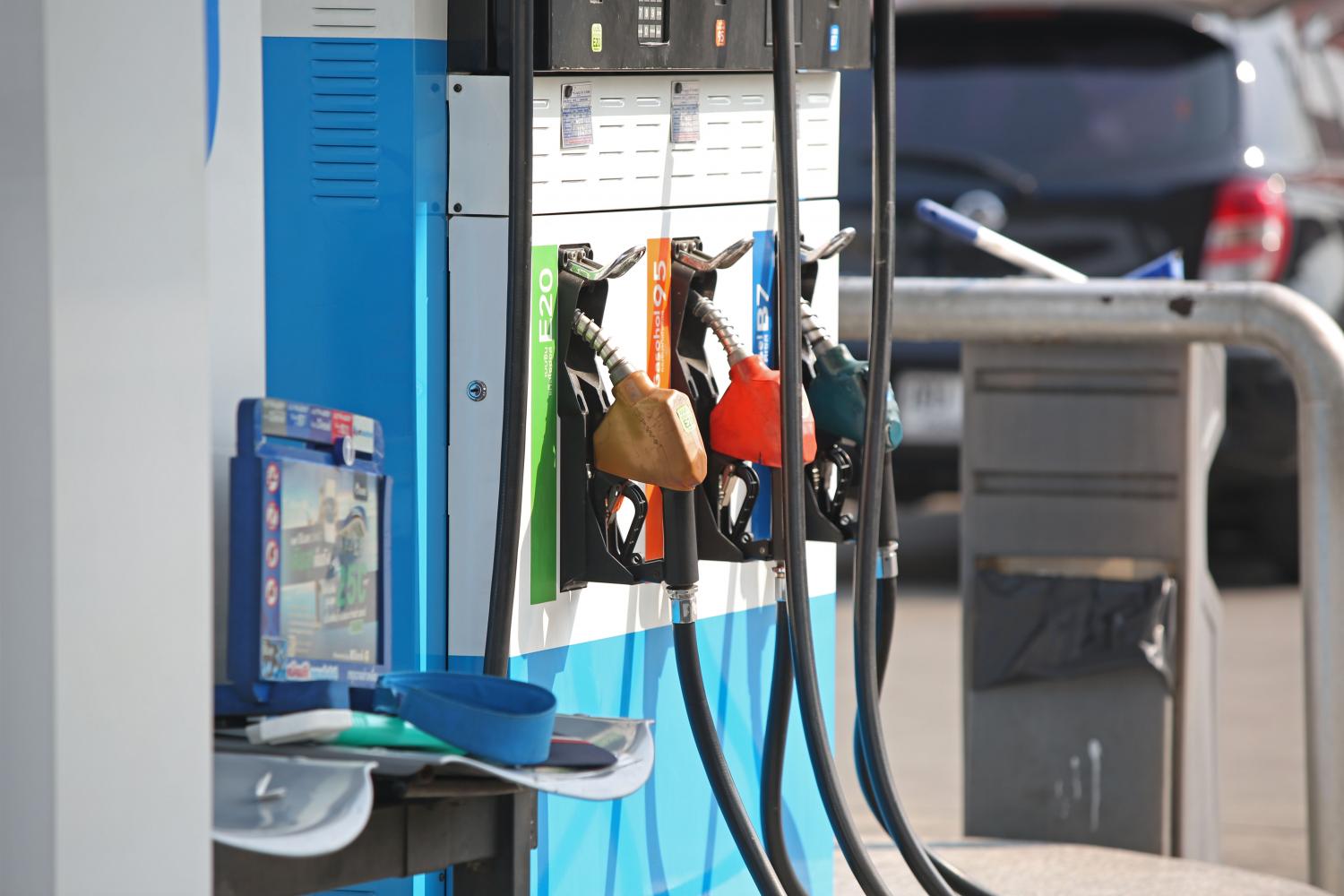 The price of diesel has increased following the government's decision to lift the 30-baht-per-litre diesel price cap.

Thanavath Phonvichai, president of the University of the Thai Chamber of Commerce (UTCC), said the government needs to roll out additional spending stimulus measures, particularly the extension of the "Khon La Khrueng" co-payment subsidy scheme, which was scheduled to end on April 30.

Consumer purchasing power will definitely weaken because of the sharp rise in oil prices and higher production costs, he said.

In deciding whether to raise the price cap, the Energy Ministry, Oil Fuel Fund Office and other organisations have to keep a close watch on global oil prices and make a weekly assessment on adjusting the price cap, said Mr Thanavath.

The diesel cap should be raised by no more than 1 baht a week, he said. The new price cap will eventually become 35 baht per litre, though the market price of diesel is already well over 40 baht per litre.

According to Mr Thanavath, the university estimates consumer spending will increase by 3 billion baht a month if the retail diesel price rises to 32 baht per litre once the diesel price cap measure expires.

The UTCC estimates consumer spending will reach 7.5 billion baht a month if the diesel price surges to 35 baht per litre.

"Our rough estimate is consumer spending during the diesel price readjustment will tally about 30 billion baht combined from June to September," he said. "We believe further government stimulus measures are needed to offset the impact of higher energy prices and to shore up the country's economy. We consider the Khon La Khrueng co-payment scheme to be the most beneficial to circulate funds in an easy and quick manner."

Mr Thanavath said an extension of the Khon La Khrueng scheme would increase consumer spending to 45 billion baht if the government hands out 1,000-1,500 baht per person to 30 million eligible recipients in a fifth phase. This level of spending is adequate to offset the money spent on higher diesel prices, helping to invigorate the overall economy, he said.

"It is highly likely global oil prices will stay relatively high as demand for oil in China is expected to rise after the mainland contains Covid-19 infections. The invasion of Ukraine is also expected to persist," he said. "Without any stimulus measures to offset the impact of rising diesel prices, the country's economy may grow by less than 3% this year." 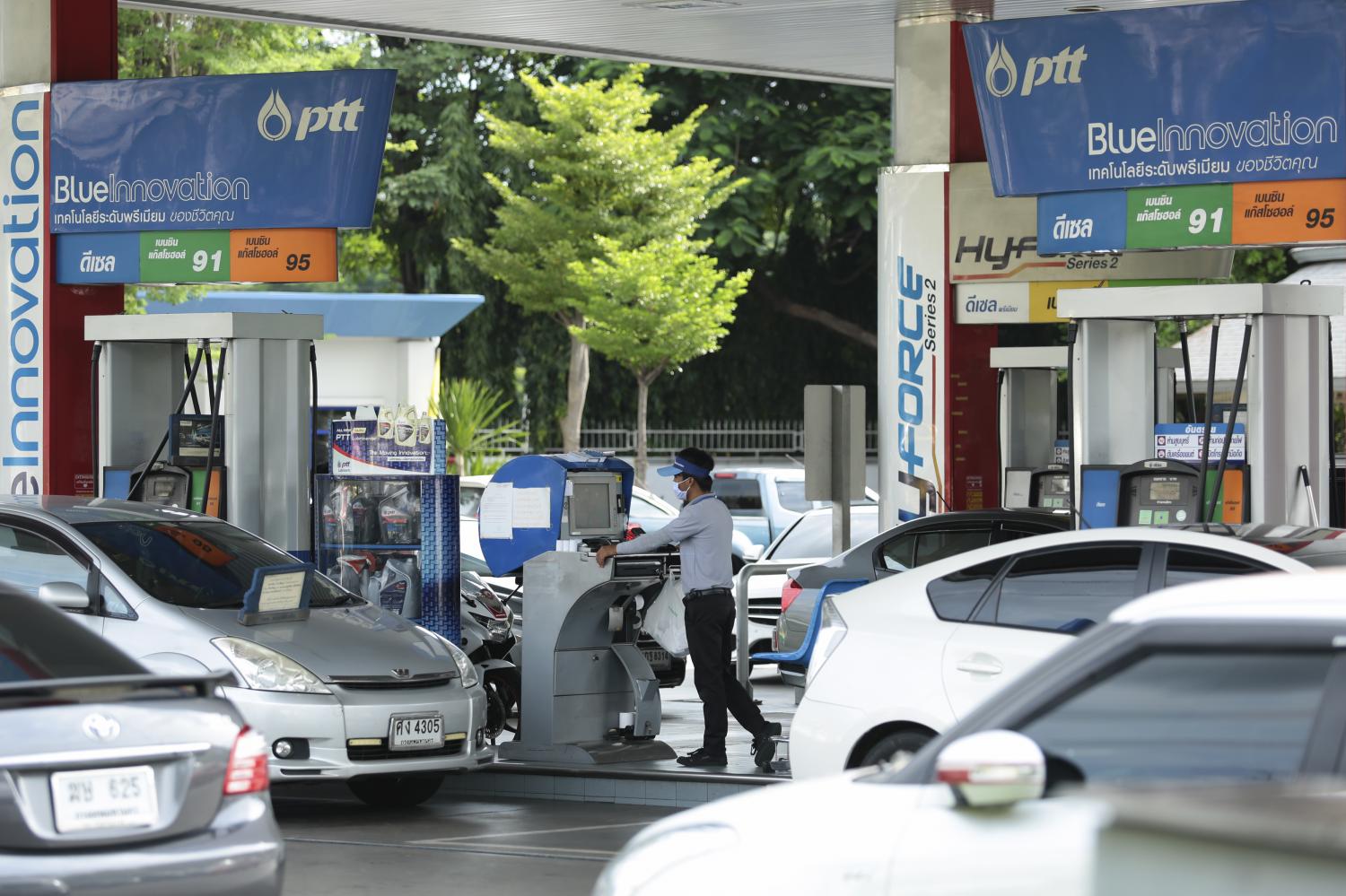 Vehicles queue for service at a PTT petrol station on Vibhavadi Rangsit Road. The price of diesel has risen following the government's decision to lift the 30-baht-per-litre diesel price cap. Patipat Janthong

Ronnarong Phoolpipat, director-general of the Trade Policy and Strategy Office, said the expected rise in diesel prices would inevitably affect the prices of domestic products and services.

The Commerce Ministry estimates Thailand's headline inflation to increase by 0.23% if the retail diesel price rises by 1 baht per litre following the end of the price cap measures. The rates are expected to rise by 0.34%, 0.45%, 0.56% and 0.67% if the price of diesel increases by 2 baht, 3 baht, 4 baht and 5 baht per litre, respectively.

Mr Ronnarong said the ministry pledges to maintain consumer goods prices as long as possible to ensure a minimal impact on consumers, despite growing pressure from rising oil prices, which affect manufacturers' production costs the most.

In addition, the ministry will continue its discount campaigns to reduce people's cost of living and add affordable public sales channels, he said.

NEW MECHANISM ON THE WAY

Authorities are designing a diesel price subsidy programme that will not exhaust the state budget while helping to ease the impact on the public during the global oil price surge, said permanent energy secretary Kulit Sombatsiri.

"This will increase the domestic diesel price gradually, rather than in one abrupt jump," he said.

The government needs to adjust its subsidy, currently made through the state Oil Fuel Fund, after the fund dipped 50 billion baht into the red. If the subsidy programme continues, it would need to spend an average of 9 billion baht a month, said Mr Kulit.

As of April 19, officials had subsidised the diesel price at a rate of more than 11 baht per litre.

Energy Minister Supattanapong Punmeechaow said it is possible authorities will subsidise more than half of any level the diesel price increases above 30 baht a litre.

Rangsun Puangprang, executive vice-president of SET-listed PTG Energy, a local oil trader, said the subsidy programme is still needed as global oil prices remain volatile, though the price of crude oil last week fell below $100 per barrel. He said it is unlikely the price will decrease to an average of $70 a barrel, last recorded in 2019, because many countries will continue to depend greatly on energy to restore their economies following the two-year impact of the pandemic.

The Thai government has struggled to control energy prices through the Oil Fuel Fund and diesel excise tax cut, said Mr Rangsun. Various measures have been implemented to try and relieve the financial burden on households and businesses.