As Bangkok prepares for the first governor's election in almost a decade, the new officeholder will face a daunting list of demands for reforms and solutions to chronic problems

Hopes are high for the Bangkok governor election on Sunday, as it will be the first time in nine years that residents have been able to cast a ballot to choose the capital's leadership.

Election promises make locals optimistic the incoming governor will step in to effectively solve these issues and push new initiatives to help restore Bangkok as a major global destinations following years of the pandemic.

The Bangkok Post talked to various business leaders about what they expect from the new leadership as campaigning in the city's gubernatorial election enters its final days.

"The Bangkok governor's role in tourism promotion has not been concrete in past years, so operators would like to see more support on marketing campaigns to help spur trips and spending in the capital city," said Marisa Sukosol Nunbhakdi, president of the Thai Hotels Association.

Bangkok's urban culture should be a highlight, aside from the renowned shopping centres, showcasing its rich culture such as art galleries and tourism sites along the Chao Phraya River, she said.

The governor must also focus on building sustainable tourism by balancing supply and demand, as well as restricting capacity at popular sites such as the Grand Palace, she said.

Mrs Marisa said the PM2.5 haze poses an urgent threat to Bangkok requiring a practical plan to address this problem.

Tassapon Bijleveld, executive chairman of Thai AirAsia, said Bangkok governors in the past always focused on fixing and maintaining public safety and security, as well as improving the city's environment, which are the basic requirements for this post.

However, he said Bangkok needs a major revamp in order to shine, especially if authorities want the capital to be at the forefront of the drive to bring back tourists to Thailand.

"Bangkok is not outstanding in any particular aspect," Mr Tassapon said. "The governor should think beyond the basic routine by creating a vibrant selling point that represents the identity of the city. For example, when people think about fashion, they think about Milan."

He said if Bangkok has a strong reputation in certain fields, whether it be art, culture, botany, or even as a fintech hub for cryptocurrencies, city development should be aligned in that direction to build a complete environment.

William Heinecke, chairman and founder of Minor International Plc, said the next governor should prioritise five key areas to maintain Bangkok's position as one of the world's top tourist destinations.

The priorities are: safety and security; infrastructure and transport; pedestrian walkways; tourist information and help centres; and pollution and air quality.

"Bangkok is known for its warm hospitality. We must ensure Thais and foreigners feel both welcome and safe in the city," Mr Heinecke said.

"Work should be carried out to minimise traffic accidents, petty thefts, overcharging scams and tourist crimes, while the transport network and connectivity must be convenient for all types of commuters and at an affordable cost. We need an efficient and hassle-free public transport system, connecting popular attractions, shopping destinations, residences and airports."

He said Bangkok's roads and pavements continue to be difficult to navigate for pedestrians. Pavements are almost invariably damaged, with potholes and loose tiles. From street vendors to speeding motorcycle taxis, walking safely in Bangkok can be a huge challenge for tourists, said Mr Heinecke.

He also urged the new governor to upgrade the tourist information and help centres, pointing out that with technological advancements, tourist information centres can be both online and offline, providing updates on the latest events in Bangkok, directions, or any other suggestions for tourists.

Mr Heinecke said everyone deserves to breathe clean air and not have to worry about inhaling pollutants and chemicals. More green spaces and stringent measures to reduce pollution are a few reforms that would lead to a healthier quality of life in the capital, he said. 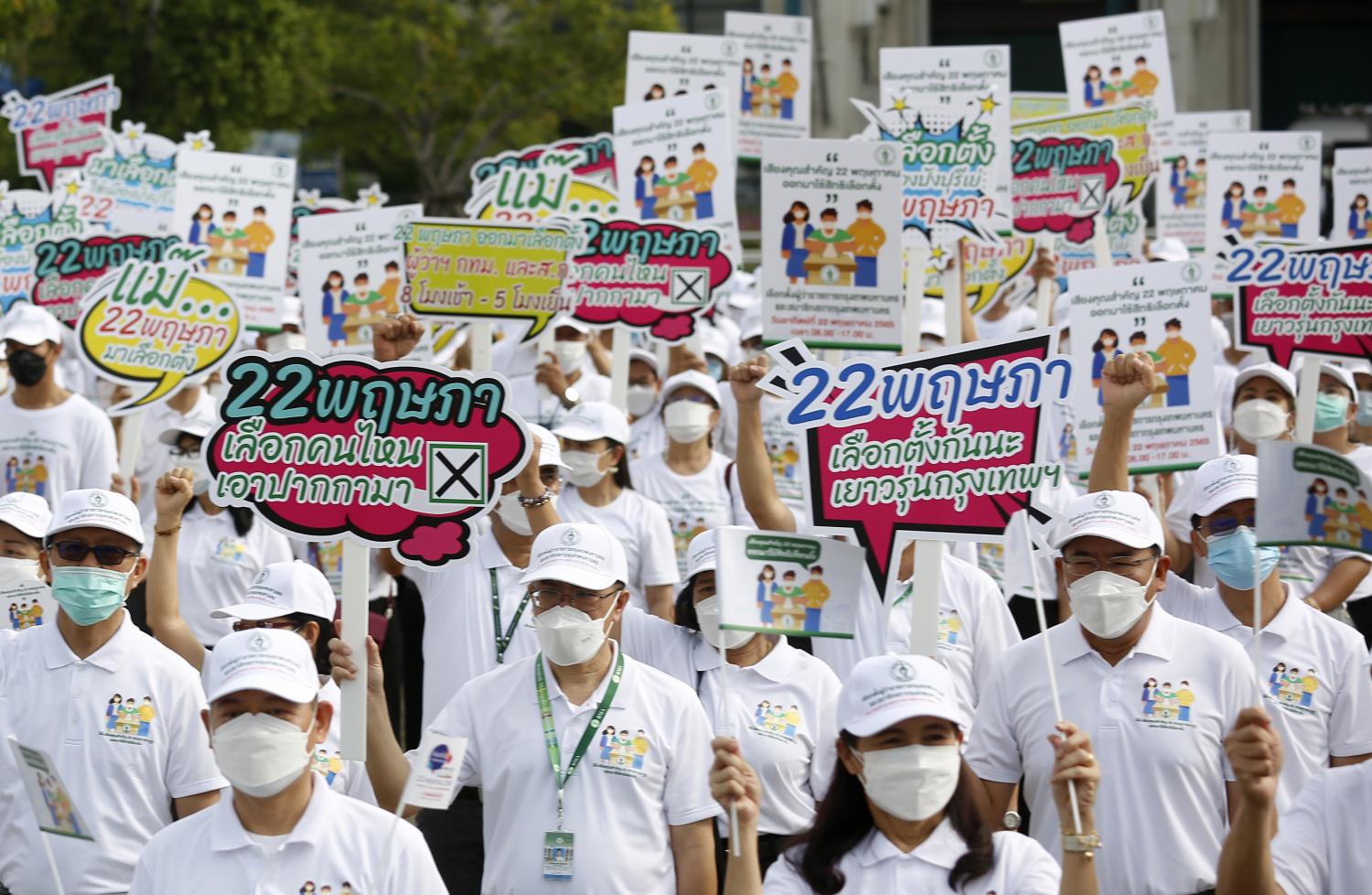 City Hall organised a campaign on May 9 to encourage voters to turn out for the elections for Bangkok governor and city councillors on May 22.  (Photo: Arnun Chonmahatrakool)

Somchai Lertsutiwong, chief executive of Advanced Info Service (AIS), the country's mobile market leader by subscriber base, said he would welcome the new Bangkok governor regardless of who wins.

The gubernatorial election is expected to help ease the frustrations of Bangkokians who want to pick their own city leadership, he said.

"Whoever is elected to become the Bangkok governor is a good thing," said Mr Somchai.

Past Bangkok administrations have disappointed some people who believe policy implementation is wracked by a bureaucratic mindset, he said.

The new governor is expected to drive new policies and implement them in a more efficient and transparent way, said Mr Somchai.

He said a bureaucratic mindset when it comes to policy implementation is the country's weak point.

As Thailand is reopening, people want to see efficient workflow driven by the city's leadership to facilitate a recovery, said Mr Somchai.

He said the new governor may have to step up efforts to tidy overhead cable lines by grouping them together or moving them underground.

The capital remains the economic heart of the country, especially in terms of tax collected from corporations, said Mr Somchai. All enterprises expect to see brighter business opportunities in the second half of this year, he said.

Sanan Angubolkul, chairman of the Thai Chamber of Commerce, said the Bangkok governor's function is similar to a company's chief executive who has to set a working strategy for the short, medium and long term, enabling cooperation between the private and public sectors.

"Brainstorming ideas and forming a great team with talented people are the most important components to accomplishing the work. The governor cannot work as a 'great hero', but must develop a team to work together," said Mr Sanan, who is also chairman and president of SET-listed Srithai Superware, the world's largest melamine manufacturer.

"The Thai chamber is willing to cooperate and support all aspects of the Bangkok Metropolitan Administration's [BMA] operations."

He said the private sector would like to see Bangkok become a more liveable city for locals and folks from the provinces who relocate to the capital, as well as foreign tourists.

Regarding the economy, he said support for a smart city policy is important because it would transform Bangkok into a modern and liveable metropolis, while digital platforms should be promoted to assist entrepreneurs and the public.

Mr Sanan said the governor needs to focus on improving people's quality of life to ensure they have a suitable place to live, a career and income. Part of this process involves enhancing the education system by adjusting the teaching and learning approaches of schools under the BMA, he said. 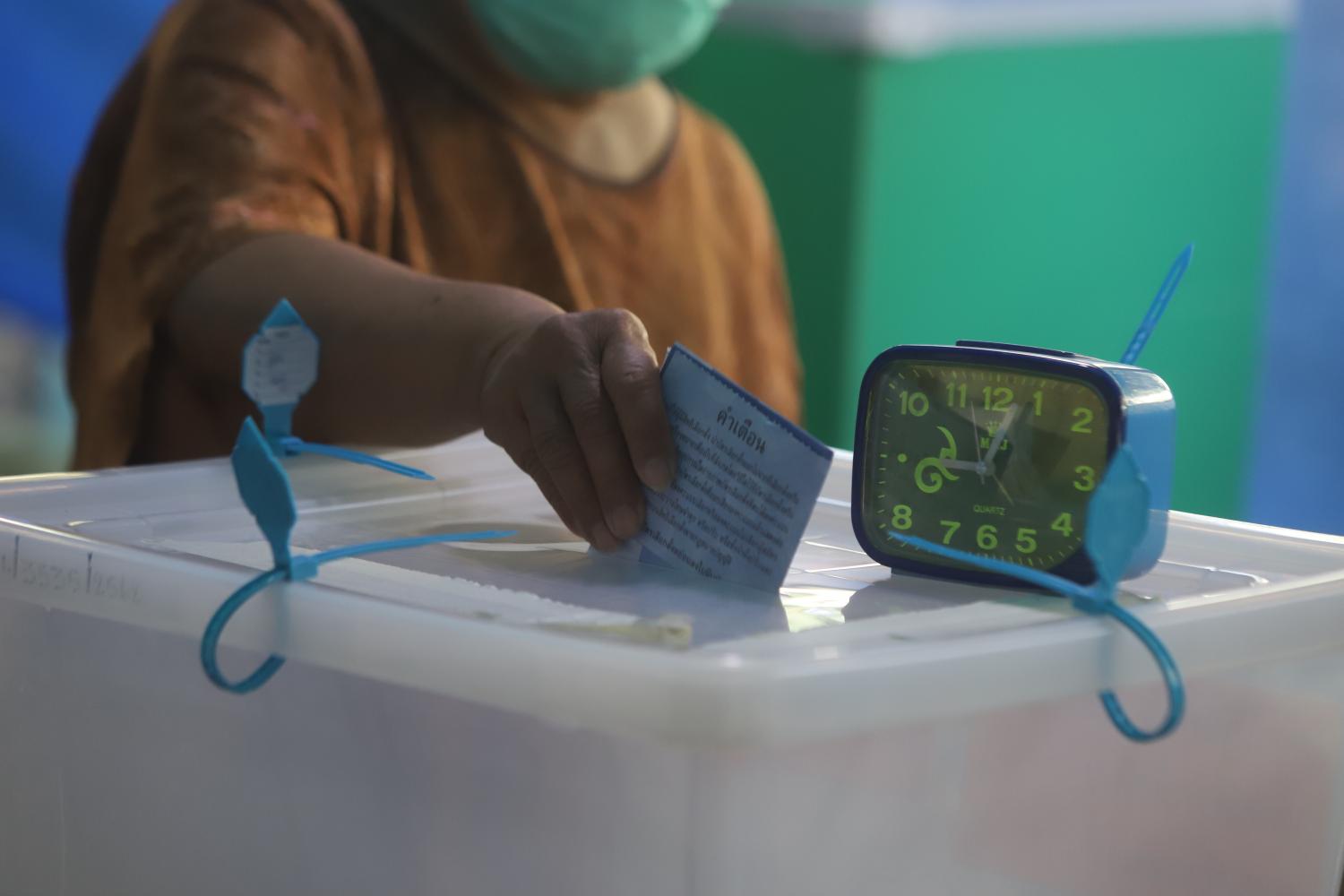 The Bangkok gubernatorial election is scheduled for the first time in nine years on May 22. (Photo: Arnun Chonmahatrakool)

It is time for a Bangkok governor to seriously regulate street vendors and return footpaths to the public, said Kriengkrai Thiennukul, chairman of the Federation of Thai Industries (FTI).

The issue is at the top of his concerns in terms of problems that plague the capital, which include poor garbage separation and dirty air caused by traffic congestion.

Mr Kriengkrai wants the governor to relocate street vending, which is sprawled over many footpaths, to more suitable areas.

"I think it's not always accurate to say street vending makes up part of the charm of Bangkok. City Hall needs to ask whether Bangkokians really like this image," he said.

"Please don't base a policy on the opinions of people who come to work in Bangkok, or foreigners who enjoy eating street food."

The FTI chairman also wants the governor to solve the chronic garbage problem.

Officials have launched campaigns urging people to sort garbage for recycling, but "when garbage trucks pick up rubbish at their houses, they mix it together," said Mr Kriengkrai.

Decreasing this air pollution can be achieved if the governor manages to successfully sort out congested traffic in the city, said Mr Kriengkrai.

Suwat Supakandechakul, president of the Thai Automotive Industry Association, has the same idea: "If the new governor can decrease PM2.5 pollution, he or she will win the hearts of people, reduce dust and save energy."

The new Bangkok governor should help build a smart city and support the "prosumer" energy management concept, though the BMA is not directly responsible for shaping or implementing national energy policies, said Natee Sithiprasasana, managing director of Surat Thani Green Energy Co and vice-chairman of the Renewable Energy Industry Club.

Smart city policies promote wise use of energy based on modern technologies, while the prosumer concept allows households and factories to both consume and produce electricity, using solar energy.

He said City Hall could support these projects, which could eventually help Thailand achieve carbon neutrality, a balance between carbon dioxide emissions and absorption, by 2050.

Mr Natee wants the new Bangkok governor to work more closely with state agencies to promote renewable energy projects such as on-grid rooftop solar power installation, which has remained unpopular the last three years in part because of unattractive tariffs from authorities for participants and the lack of a platform to facilitate electricity trade among homeowners.

Sumrit Sitthiwaranuwong, managing director of Solar D Co, a local seller of rooftop solar panels and battery systems, said City Hall can promote clean energy by amending regulations that require businesses to go through complicated and lengthy procedures just to get permission for the installation of rooftop solar panels. By law, City Hall needs to conduct a safety inspection before granting permission.

"Officials should improve their work to reduce time and make it easier for them to grant permission," said Mr Sumrit.