The Joint Standing Committee on Commerce, Industry and Banking (JSCCIB) has asked the government to delay full enforcement of the Personal Data Protection Act (PDPA) until clear directions are issued and 20 organic laws completed.

Sanan Angubolkul, chairman of the Thai Chamber of Commerce, addressed the media after a meeting with the JSCCIB.

Mr Sanan said concerns were expressed about enforcement as well as punishments related to the PDPA, which went into effect on Wednesday.

For these reasons the JSCCIB will ask the government to consider delaying application of PDPA laws.

Meanwhile, Minister of Digital Economy and Society (DES) Chaiwut Thanakamanusorn said that an important part of the PDPA is protecting people's personal data from being used wrongly, particularly in the matter of online purchases.

To that end, if vendors wish to retain their customers' personal data including address and mobile phone number, permission is required if they are to comply with the law. 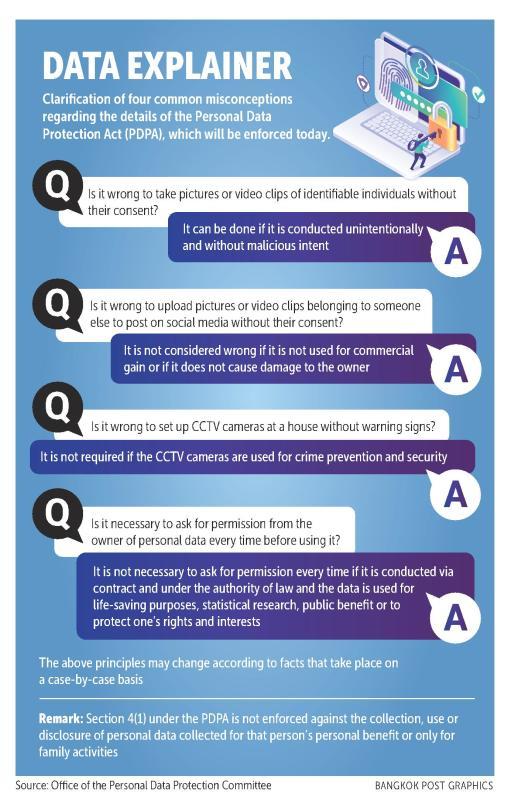 If someone's personal data is found to have been used without consent, the data owner can file a lawsuit.

The penalty for improper data use carries a fine of up to 1 million baht and a maximum jail term of one year, Mr Chaiwut said.

However, some exceptions and allowances are made regarding PDPA enforcement, for example if one person's information or images are included in another person's post uploaded to social media and done so without malicious intent.

Mr Chaiwut added that personal information made public via the reporting of legal proceedings is likewise exempted.

Some details of PDPA laws, however, remain vague and must be clarified, for instance images taken from security camera footage, he said.