For work hours, one size does not fit all
Business

For work hours, one size does not fit all

While the four-day workweek gained popularity in some quarters during the pandemic, the bulk of Thai jobs are in manufacturing, farming and tourism, making it a poor fit

Morning commuters head to work at the Chong Nonsi skytrain station in Bangkok.

A four-day workweek sounds pleasing to many and has gained traction in some fields as employees are hesitant to head back to the office. However, industry analysts and executives in Thailand are sceptical of a permanent shift in the nation.

Tanit Sorat, vice-chairman of the Employers' Confederation of Thai Trade and Industry (EconThai), said the pandemic caused the four-day workweek model to resurface or emerge in many countries.

The core idea is employees are allowed to work four days a week and receive the same compensation if they are as productive as during a five-day workweek. Some locations have modified the workdays to be longer.

"The four-day work model has been here for several years. It focuses on improving work-life balance while reducing pollution, in addition to other benefits," he said.

"The idea resurfaced during the pandemic because people working from home realised they could get their work done where they wanted, when they wanted as long as they have a good internet connection."

Sanan Angubolkul, chairman of the Thai Chamber of Commerce, said a four-day workweek sounds like a good concept, but it requires thorough consideration including job characteristics, number of working hours, and related labour laws and regulations.

"If such a model is applied, we have to think about how to adjust the working hours from five days a week, 40 hours a week," he said.

"Many companies in Thailand have tentatively applied work-from-home practices in combination with this concept."

Mr Tanit said the nature of work in Thailand, especially the workforce structure for the main contributors to GDP such as manufacturing and tourism, are not conducive to squeezing the same amount of productivity from 32 hours per week.

"The four-day workweek is not applicable to all countries. It depends on the quality of labour in each place. Some places use robots and advanced automation," he said. 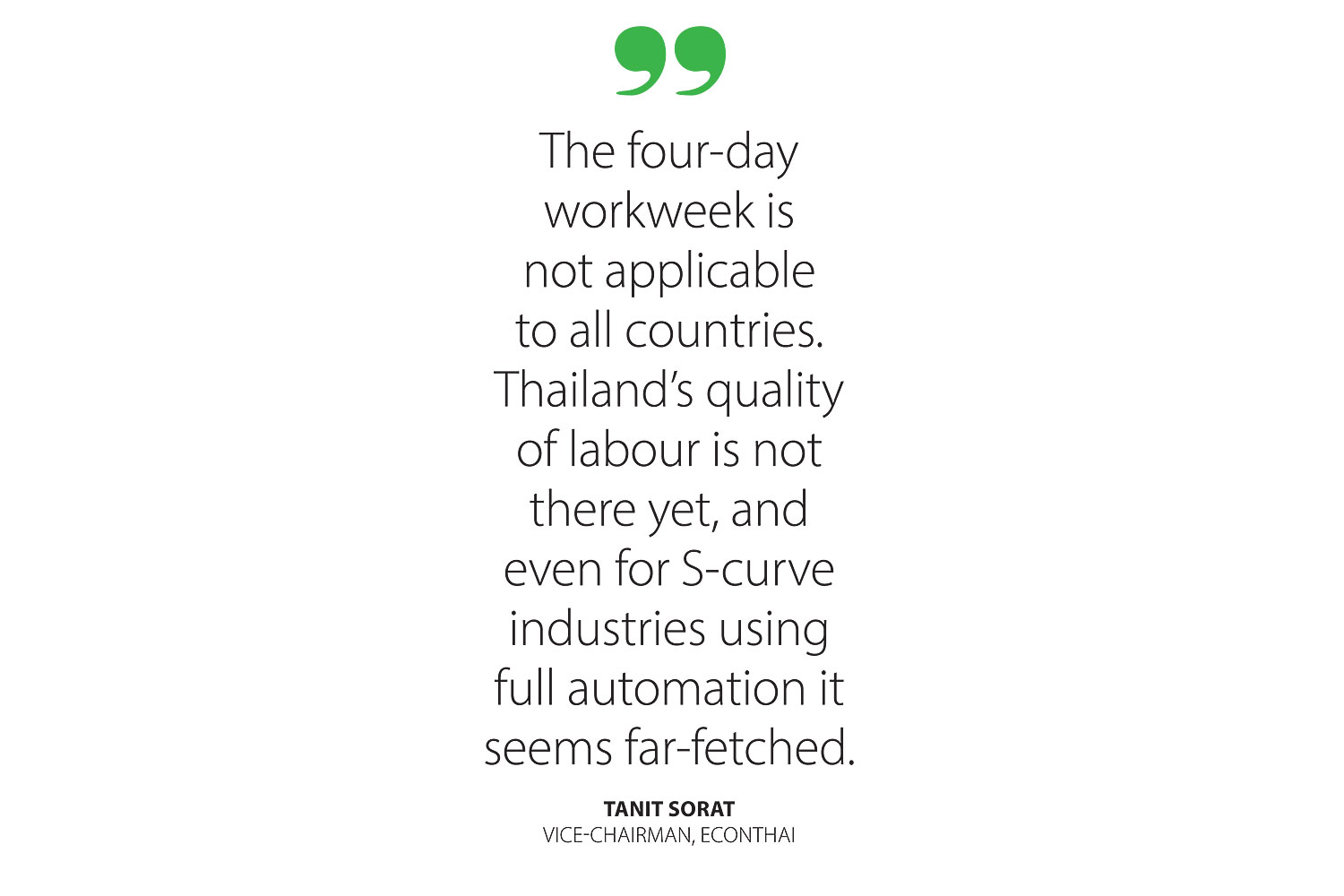 "Thailand's quality of labour is not there yet, and even for S-curve industries using full automation it seems far-fetched."

S-curve industries are part of the Thailand 4.0 scheme that focuses on intensive innovation, technology and data analysis, such as robotics, aviation, logistics and the medical sector.

"We still mostly use manual labour to engage in continuous manufacturing. If someone is sick and cannot come to work, there will be issues on the production line. Not everyone can afford to work from home. Some office workers, such as those who make 30,000 baht or so, want to go to offices because running the air conditioner all day at home is expensive," said Mr Tanit.

"Looking back eight or nine years to when the Thailand 4.0 policy was introduced, I see little progress in the country. I see no clear future for this policy."

Some SET-listed companies such as national oil and gas conglomerate PTT have tried a four-day workweek for office workers, while continuing five days a week at factories, he said.

Around 50% of the more than 1,200 companies listed on the Thai stock market are in the manufacturing sector.

Mr Tanit said it is hard to imagine how manufacturers will allow four-day workweeks.

"Four days is impossible. Usually factories operate six days a week. Reducing work days will cause production to miss targets, affecting the balance of demand and supply in the market," he said.

One of the major advantages of a four-day workweek is a better work-life balance, leading to better work quality and happier employees. But this model does not fit labour-intensive industries in Thailand, in which humans, not robotics and automation, dominate work, said Mr Tanit.

With more than 140,000 factories in Thailand, they need a steady supply of human workers to stay in operation, especially those in farm product processing, in order for the country to remain a major food exporter, he said.

One size for some

There is no "one size fits all" answer to the four-day workweek, as it suits only some jobs, said Pichai Tinsuntisuk, honorary adviser to the Waste-to-Energy Trade Association.

"Even working five days a week is still not enough for some jobs. Employees need to work at home on weekends," he said, referring to certain functions at a power plant.

Mr Pichai said it is true modern technology allows for remote work, where certain jobs can be done faster or more easily from home, but some jobs at a power plant such as system monitoring require the daily presence of experts at the workplace.

He is open to a four-day workweek being applied to some development projects, or more flexible work schedules.

Yet Mr Pichai said it is too soon for Thai businesses to reduce working days as they struggle to recover from the economic hit of the pandemic, which has plagued the country since early 2020.

Now would be a good time for companies to focus more on reskilling and upskilling their staff and considering rotating workers through jobs, he said.

The key component of shifting to a four-day workweek is ensuring productivity is steady, said Mr Pichai. If employers and employees cannot guarantee a satisfactory level, shifting to four days a week may eventually cause a negative image in the eyes of prospective foreign investors, he said.

"The push for a four-day workweek is coming from developed nations through different parties. In Japan, it came from employers seeking to improve work-life balance and save on costs, while in Germany, the United Kingdom and Belgium, the push came from trade unions," said Mr Pichai.

Now a growing list of firms in Japan, including major companies such as Panasonic, are implementing the new work arrangement.

Only a handful of German startups are trying out the shorter workweek model. Some 60 UK companies signed up for the largest four-day workweek trial in Europe, set to start this month and end in January 2023.

He said the only country he knows of that found success and still follows a shorter workweek is the United Arab Emirates. The policy only covers government agencies, as officials work a half-day on Fridays to participate in Friday prayers.

Somchai Lertsutiwong, chief executive of Advanced Info Service (AIS), the country's mobile market leader by subscriber base, did not comment on a four-day workweek, but he has embraced an online-offline hybrid work model during the pandemic.

When the pandemic triggered much uncertainty for firms in April 2021, AIS started to divide its workforce, excluding call centres and some divisions, into two teams. These teams take turns coming to the office and working from home.

As for reaching out and assisting customers, AIS staff utilised online channels when its shops were closed during the pandemic.

The company's management also gives flexible authority to the heads of all divisions to consider how they want to manage the work flow for their staff, he said.

From May, AIS adopted a 60-40 work formula for its staff, which means employees can work three days per week in the office and two days remotely, following the country's reopening.

Mr Somchai said it is still premature to judge the efficiency of the hybrid work model, but it is expected to operate for some time and could be a new way of working for any enterprise.

He said in terms of engagement with customers, online work is not the ideal format and it cannot guarantee the best output all the time.