Railway market back on track post-pandemic

SAMUT SONGKHRAM: A train bell rouses a Thai grandmother dozing in her fruit and flower stall, sending her rushing to fold in her awning before the locomotive slowly rumbles past, so close it almost touches her wares.

Six times a day at the Mae Klong Railway Market, local customers and foreign tourists scramble into nooks and crannies while vendors calmly move their woven baskets of goods away from the tracks and close their umbrellas to make way.

Hundreds of stallholders carve out a living along this 500-metre stretch of railway in Samut Songkhram, 80 kilometres west of Bangkok, selling everything from fresh produce to live turtles to clothes and souvenirs.

"Even though it looks risky and dangerous, it's not dangerous at all," said fruit and vegetable vendor Samorn Armasiri.

Her family has run a stall in the bazaar -- nicknamed in Thai "talad rom hup", or the umbrella-pull-down market -- for five decades, and she's never witnessed an accident.

"When the train enters, officers sound the horn and everybody packs their stuff -- they know the drill," she said. 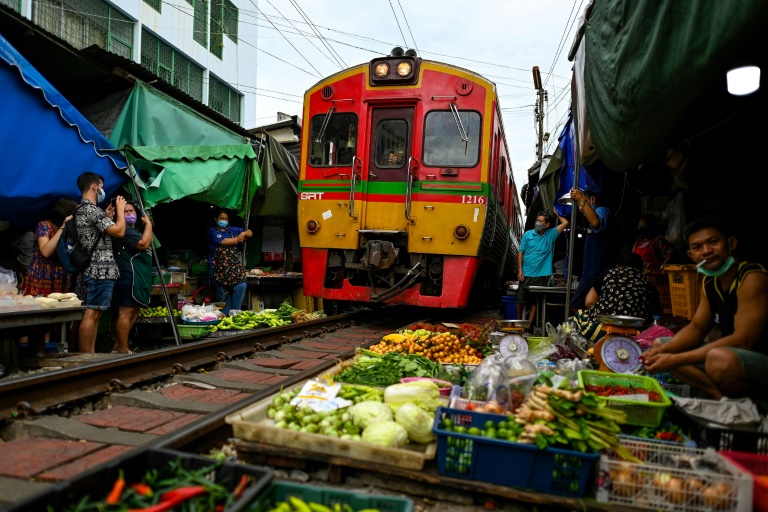 Six times a day at the market, vendors calmly move their woven baskets of goods away from the tracks to make way for the passing train. (Photo: AFP)

The sides of the train carriages pass directly over -- with just centimetres to spare -- bags of lettuce, broccoli, onions, ginger, chilli, tomatoes and carrots placed carefully on the outside of the rails.

In recent years, the spectacle had become a hub for coconut-drinking backpackers in elephant pants and Instagram selfie enthusiasts, but the pandemic hit hard.

Now, with Thailand dropping Covid-19 entry restrictions, tourism is picking up once more.

Australian Ella McDonald, on a two-day stopover on her way to Turkey, was among those marvelling at the market's organised chaos.

"It was crazy and hectic," she told AFP. "I was shocked at how big the train was in the small amount of space.

"It's a unique experience. I've never seen anything like this anywhere else in the world."

- Not just for tourists -

Before Covid-19 hit, the market was also beloved by Chinese tourists buying durian -- the pungent-smelling "king of fruit".

Strict quarantine rules presently discourage would-be visitors from China, who once made up the largest share of foreign tourists in Thailand.

But even without them, fishmonger Somporn Thathom -- a stallholder since 1988 -- said business was finally picking up after two years of hardship and financial strain.

"During Covid, I barely made enough to pay my staff. I managed to sell 10 fish per day," the 60-year-old said.

"I used up all my savings... and had to borrow money from the bank."

"It's not made up. It's not built for the tourists," he said.

"The tourists, when they come, they can see the tradition and culture of the local people of Samut Songkhram."

But for eight-year-old Australian William, the pandemonium ensuing as the train passed through was captivating.

"The most exciting thing is when you get the train going past -- just seeing the (market vendors) pack up," he said.