Vehicles refuel at a PTT petrol station on Nawamin Road as retail oil prices have been soaring the past few weeks. (Photo: Varuth Hirunyatheb)

Energy authorities are considering imposing a price cap on oil sold by Thai refineries to better control energy inflation, with ongoing measures to tackle the problem scheduled to end this month.

The Energy Ministry formed a working panel to study how to narrow what is known as the oil refinery margin, which normally averages two baht a litre but has risen to five baht a litre in recent months, said Energy Minister Supattanapong Punmeechaow.

The refinery margin is part of the retail oil price that drivers pay at petrol stations, and is essentially a cost added to the crude oil price during the refining process.

The group is looking into energy and consumer protection laws as well as considering a call for cooperation among oil companies in order to implement a temporary refinery margin intervention, which should lead to a lower oil retail price. 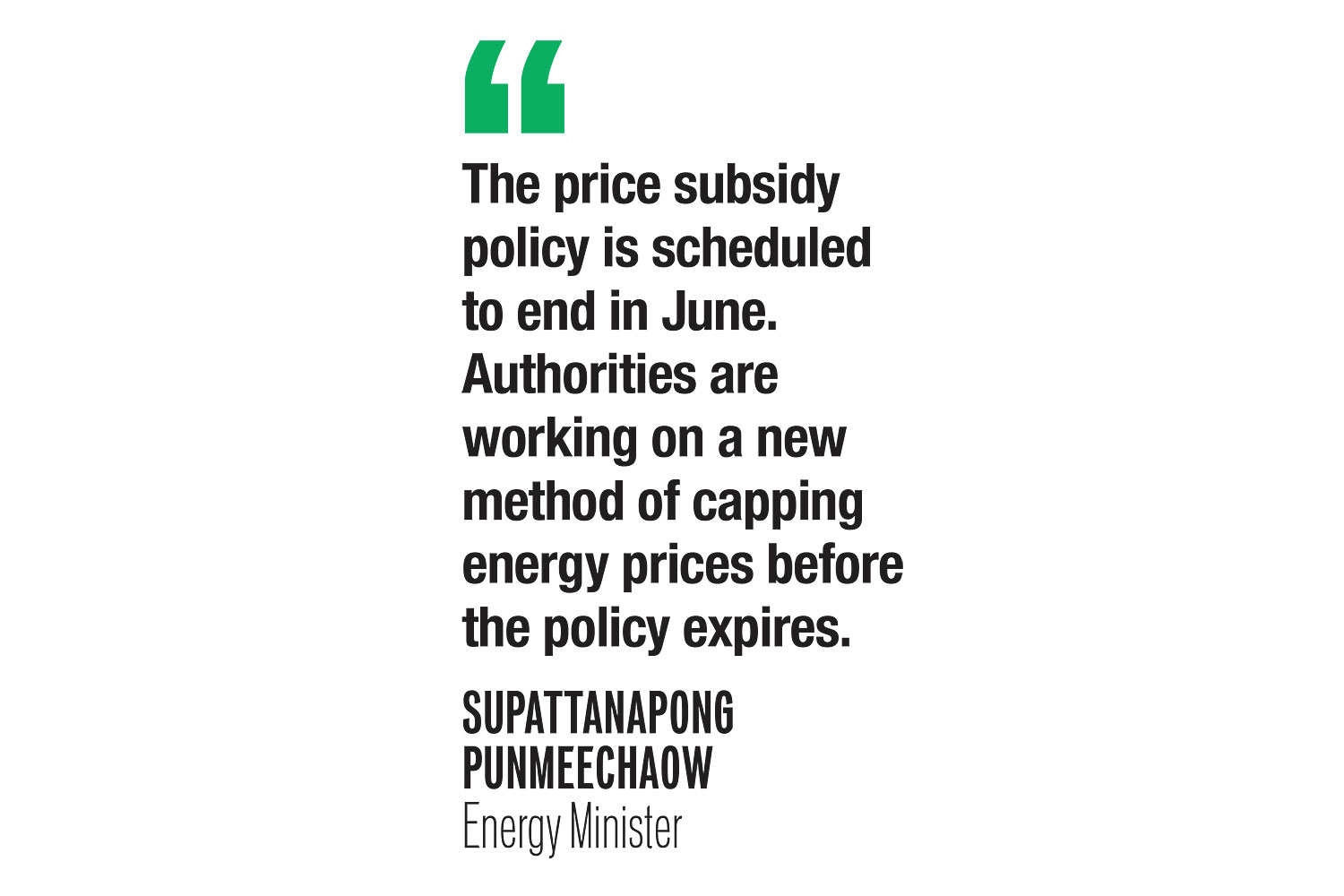 This marks the first time the ministry has considered an intervention since global oil prices started soaring late last year.

The government has capped the diesel price since October last year by spending money from the Oil Fuel Fund and reducing the diesel excise tax to support its price subsidy programme.

The domestic price of diesel had been capped at below 30 baht a litre for months before the government decided to gradually have the price rise to 33.94 baht a litre because of dwindling cash in the Oil Fuel Fund.

The price subsidy policy is scheduled to end in June, said Mr Supattanapong.

"Authorities are working on a new method of capping energy prices before the policy expires," he said.

It is uncertain whether policymakers will renew the subsidy programme with an amount of financial aid similar to or lower than the current version as the impact of the Russia-Ukraine war continues to keep global oil prices at high levels.

Money from the Oil Fuel Fund has been spent on capping the prices of diesel and liquefied petroleum gas, which is used as household cooking gas.

The fund is 81.4 billion baht in the red, while its cash reserves stand at only 9.7 billion baht. This caused authorities to carefully manage the diesel price subsidy programme.

In the power sector, the government also told the state-run Electricity Generating Authority of Thailand (Egat) to cap the fuel tariff, which is used to calculate electricity bills, to help people cope with higher living costs between September 2021 and April this year.

Egat said this measure had cost it more than 60 billion baht.