Ad-supported platforms from Roku and deep-pocketed parents including Fox, Paramount and Amazon are moving beyond bargain-basement programming

Advertisers are increasingly turning to once-obscure streaming platforms with quirky names to reach people who aren't paying for cable TV or subscribing to streaming services.

Advertising-supported video-on-demand platforms -- a group that includes free apps like Tubi, Pluto TV, Freevee and Xumo, as well as the ad-supported versions of subscription services like Hulu and HBO Max -- are expected to generate nearly $19 billion in revenue this year, more than doubling their 2020 haul, according to Insider Intelligence projections.

The growth of free-to-use services, which were once derided as the second-class citizens of streaming, comes as industry giant Netflix Inc. is struggling to keep expanding its subscriber base amid growing competition from streaming rivals, while the traditional cable-TV bundle is losing millions of customers every year.

"People are creating their own bundles right now, and they are only willing to pay for a certain number of apps," Pluto TV CEO Tom Ryan says. "We want to complement those paid apps."

Dustin Herendeen, 35 years old, from Fort Wayne, Indiana, says he used to get most of his entertainment from Netflix but started looking for other options when the service shifted its focus toward original shows and raised its price. 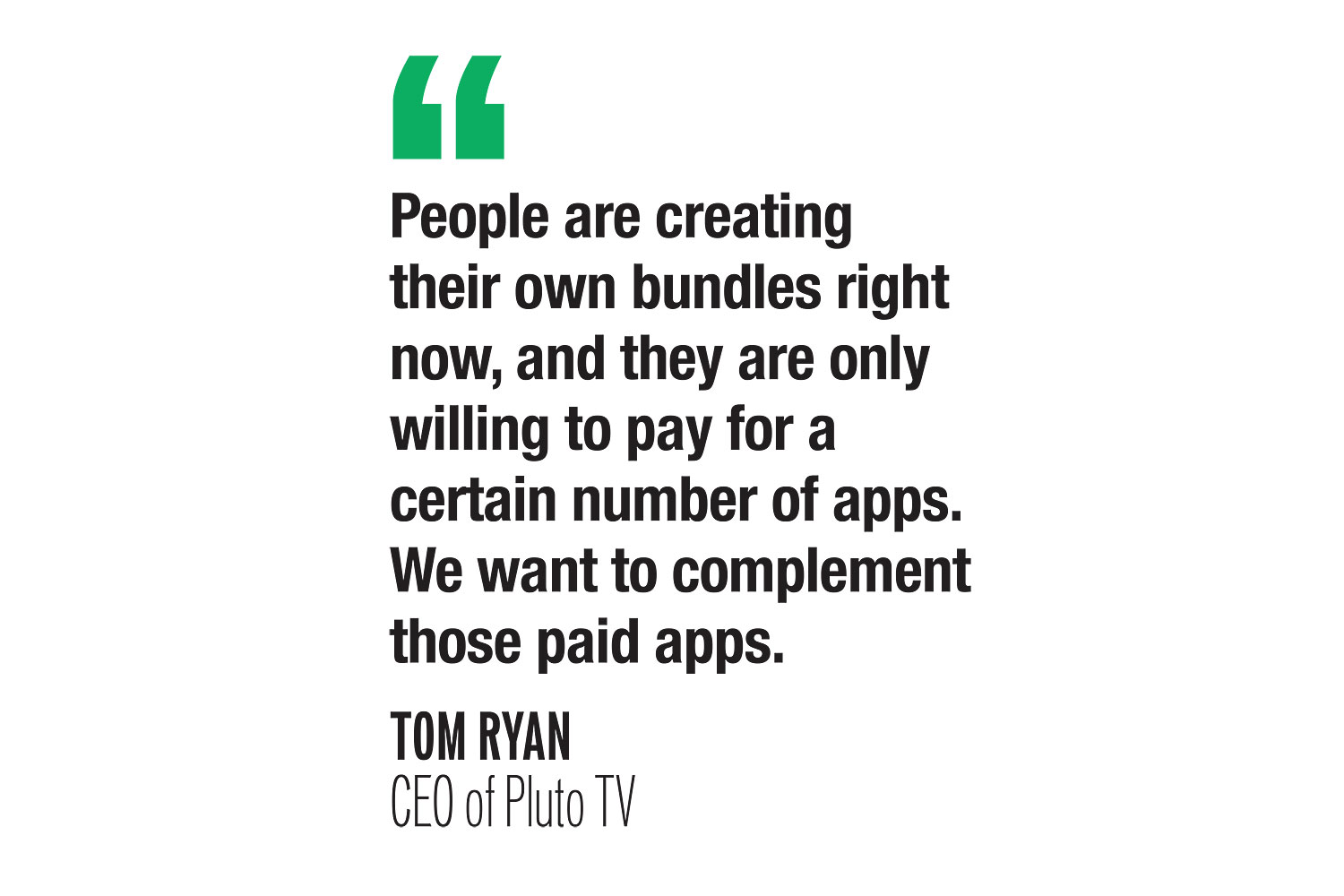 "The tailwind is behind AVOD," says Tubi chief executive Farhad Massoudi, referring to the industry's acronym for advertising-supported video-on-demand platforms.

Like Pluto TV, Nickelodeon is owned by Paramount Global.

Pluto TV is expected to bring in $1.24 billion in advertising revenue this year, according to Insider Intelligence, significantly more than the $340 million Paramount -- which was then known as Viacom -- agreed to pay for it just three years ago.

That is also true for Tubi, which Fox Corp. acquired in 2020 for $490 million and is expected to generate $830 million this year.

Other major media companies have raced to get in the game. Amazon.com Inc. in 2019 launched its own ad-supported streamer, IMDb TV, which it recently renamed Freevee, while Comcast Corp. bought Xumo in 2020.

Flush with advertising cash and backed by deep-pocketed corporate giants, these services are starting to venture beyond the bargain-basement programming that got them started.

For the longest time, most free ad-supported streamers didn't pay upfront for the content they offered -- mostly old movies and TV shows -- opting instead to give the program supplier a cut of their ad revenue.

Lately, they have transitioned to traditional licensing deals, studio and streaming executives say, which makes it easier for them to acquire higher-profile and more recent programming.

Roku Inc., the largest maker of streaming devices in the U.S., recently struck a deal with Lions Gate Entertainment Corp. to offer movies such as the John Wick franchise and Expendables 4 on the Roku Channel, its free ad-supported streaming service.

Jim Packer, president of worldwide TV and digital distribution for Lions Gate, says that a few years ago, it would have been hard to imagine a free ad-supported streamer having the financial wherewithal to make such a deal.

"They have transitioned very quickly," he says.

These services are even starting to offer original content -- long the remit of subscription platforms and traditional TV channels.

"We now are at the scale to invest in some originals," says Rob Holmes, Roku's vice president of programming.

With its streaming devices in more than 60 million homes in the U.S., the company estimates that the Roku Channel has a reach topping 80 million people.

Roku also has breathed new life into Die Hart, a Kevin Hart show that it acquired from the now-defunct Quibi.

Greg Garcia, the creator of the NBC hit My Name is Earl, is making a new comedy about a group of do-gooder ex-cons called Sprung for Freevee.

He says the fact that Freevee is owned by Amazon was a big selling point for him.

"I know they are going to put the weight of Amazon behind it to promote it," Mr. Garcia says.

Lauren Anderson, co-head of content and programming for Freevee, notes that while advertising-supported video-on-demand platforms are similar to broadcast television in the way they rely primarily on ad revenue, the former "allow creators to create freely, away from arbitrary creative restrictions."

Tubi last year launched The Freak Brothers, an animated series starring Pete Davidson, while Crackle Plus, a free ad-supported streamer owned by Chicken Soup for the Soul Entertainment Inc., in late 2019 released Going From Broke, a reality show following young people trying to get out of debt that is executive-produced by Ashton Kutcher.

Chicken Soup for the Soul Entertainment CEO Bill Rouhana says that the service made a big push into original content the past few years, and that programming is what advertisers most often want to be associated with.

"Over 25% of our ad impressions are coming from original and exclusive content," he says.

Industry analysts say the rise of free ad-supported streamers is partly due to the growing use of connected televisions, on which apps like Tubi and Pluto TV are often preloaded.

Another problem: Many commercials on ad-supported streaming services continue to play after viewers turn off their television due to a lack of communication between the TV and external streaming device, according to a recent study by WPP PLC's ad-buying giant GroupM and ad-measurement firm iSpot.tv Inc.

The industry is working on solutions to this glitch, which is expected to cost more than $1 billion in wasted ad dollars this year.

The popularity of free ad-supported platforms also comes as the largest pay-TV providers in the U.S., a category which represents about 93% of the market, lost nearly two million subscribers in the first quarter of 2022, similar to losses in the same period for the past two years, according to Leichtman.

"Advertisers have lost access to some of the audience, and it is most pronounced in the younger demographics," he says.

Crackle says 64% of its 40 million-plus monthly active users are between the ages of 18 and 44.

Free ad-supported platforms are also becoming a growing destination for independent filmmakers, who have to deal with the shrinking number of movie theaters willing to carry smaller films and with subscription streaming services' growing focus on bigger-budget projects.

"The more platforms we have, the more opportunity we have to get our content made in a nontraditional way," says Michael Olmos, a director who is making Murder City,'' a crime drama set in Detroit, for Tubi.

Sometimes, talent needs to be given a crash course on these platforms before coming aboard.

"Not everyone is aware of Tubi or Pluto," says Jillian Apfelbaum, executive vice president of content for the production company Village Roadshow, which is making movies for Tubi.

Her pitch is simple: She says she tells producers that making content for Tubi could be the opportunity to become the "Breaking Bad" or "House of Cards" of a new platform.