Dealing with decades of disruption
Business

Dealing with decades of disruption

After 20 years of geopolitical and technological upheaval, firms are looking for ways to survive and thrive

Business disruptions over the past decade have forced many enterprises to adjust their operations to ensure they survive and strive for future growth, according to corporate and media leaders.

Technology, partnerships and regulatory frameworks could play a significant role in boosting the strength of businesses during periods of intense disruption.

The leaders shared their views at a seminar entitled "The Disruption of Business, Competition and Transformation, Ready Now for the Future", organised on Wednesday by the Thai Broadcast Journalists Association and the University of the Thai Chamber of Commerce at the Centara Grand at Central Plaza Ladprao Bangkok.

Peerawat Chotithammo, president of the Thai Broadcast Journalists Association, said the media industry has been disrupted by a series of events over the past decade, from economic collapse to innovation and digital advances, especially over-the-top (OTT) platforms, while online channels do not guarantee survival.

The business models the media needs to survive are through innovation adoption and partnership ecosystems, including mergers and acquisitions that help strengthen their capacity to cope with new challenges.

Mr Peerawat said the media industry has been disrupted for the past two decades through a series of shocks: economic collapse, digital disruption through digital TV roadmaps, 4G wireless broadband, OTT, and the current situation caused by the pandemic, inflation and the Russia-Ukraine war.

The auction of digital TV licences was seen by some as a wrong strategic policy move, leading to mistaken forecasts of advertising spending.

The TV media was heavily affected by the arrival of 4G licences as the high-speed internet was a boon for video streaming and OTT platforms dominated by foreign players. 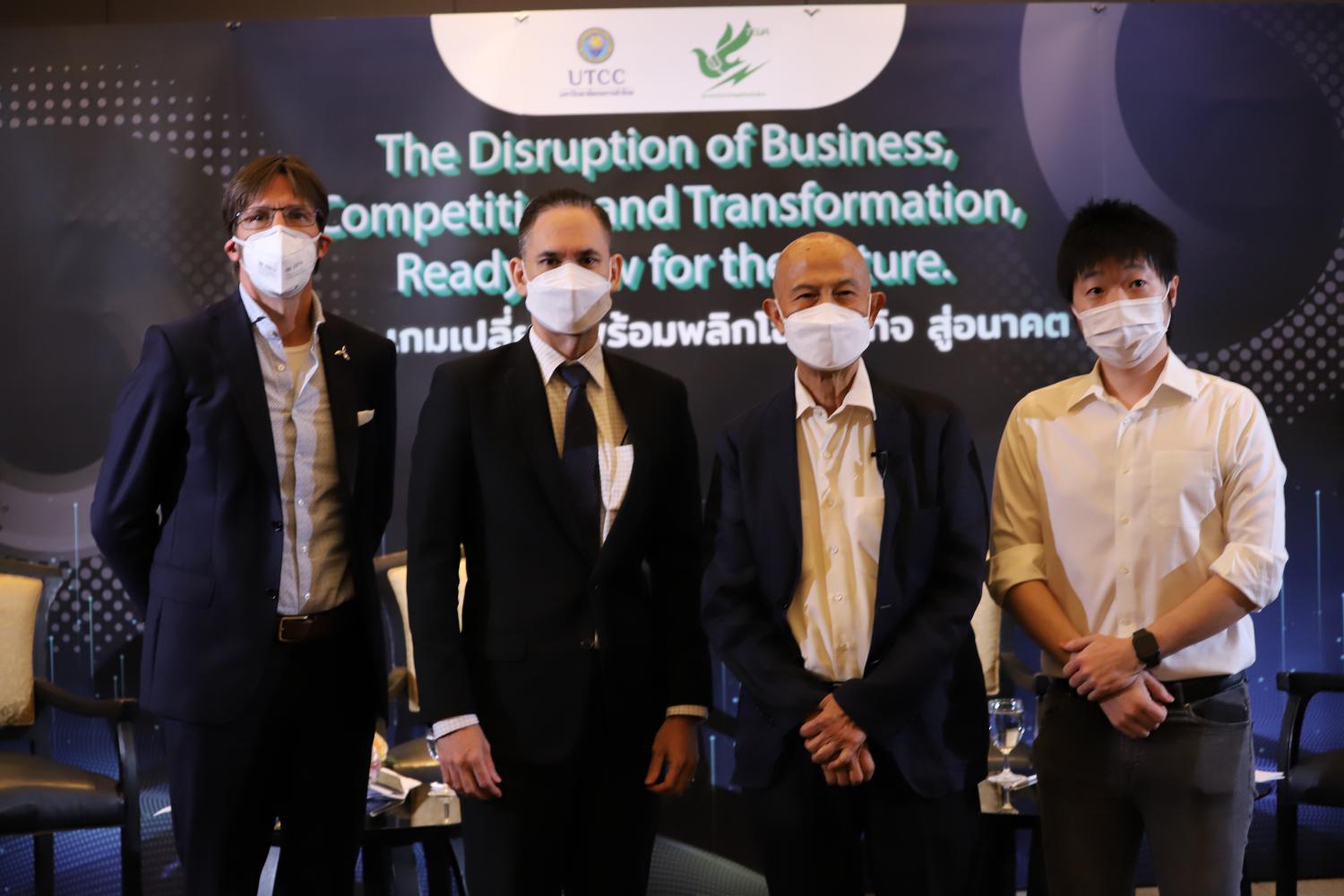 The telecoms sector is also facing business challenges amid a stream of new technologies and internet companies.

All eyes are now on the planned merger of True Corporation and Total Access Communication (DTAC), which is expected to be part of an attempt to survive digital disruption, enhance competitiveness, and level up services to respond to customers' changing needs in the digital era.

The deal is intended to foster an equal partnership that would usher in a new tech company to play a part in levelling up the country's competitiveness.

Jon Omund Revhaug, senior vice-president of telecom giant Telenor Group for the Asia region, stressed that 90% of Telenor customers are in Asia and 60% of its mobile service revenue is from Asia. Telenor is the parent of DTAC.

Telenor predicts it will have 400 million new mobile subscribers globally by 2025, 40% of whom will be in Asia-Pacific.

"Asia is a growth machine for Telenor Group due to the rising number of digital savvy users since the pandemic, and this is just the starting point for digitalisation. The company is continuing its growth opportunity, including Thailand," said Mr Revhaug.

He said Telenor is committed to playing a part in developing local companies, capabilities and talents, as well as utilising global industrial knowledge and partnerships, continuing its investment and building scale.

"Connectivity is the backbone of modern society," Mr Revhaug said.

He stressed that the planned merger of DTAC and True is not a soft exit of Telenor from Thailand.

"We aim to make a larger and stronger tech telecom to be more competitive and put in more investment," Mr Revhaug said.

"If the National Broadcasting and Telecommunications Commission [NBTC] rejects the deal we will see what we can do, but we don't have any plan to exit the market," said Mr Revhaug.

According to him, stable regulatory environments are very important: "We hope regulatory circumstance will be supportive in the long run."

He said the amalgamation of DTAC and True will create a "tech telecom for the future" that combines resources, capabilities and investments from the two companies.

The move would be a boon for future innovation, digital connectivity, innovation, and services development, and would attract the right talent and career paths, he said.

Telenor believes the merger of DTAC and True will create a new telecom-tech company with scale, financial capabilities and competence to advance technology and drive service innovations that will benefit Thailand and Thai consumers, he said.

"The two companies have filed a notification in the merger with the NBTC, and we expect that the notification process will be fair and in accordance with relevant laws and regulations," said Mr Revhaug.

Natwut Amornvivat, co-president of True, indicated that the tech and telecom industries needed local players on the top layer of digital platforms to help strengthen the country's competitiveness amid rapid changes in the digital business landscape.

True, he said, aims to serve as a tech company through the differentiation of its entire operations.

He said the merger of True and DTAC is needed to foster a strong player as a new alternative operator and pave the way for a more competitive ecosystem coping with global platform operators, which now have a strong engagement with Thai consumers.

Mr Natwut said the telecom regulator needs to be more flexible to support the ecosystem.

He said the local telecom service providers should flex their muscles to cope with the new business ecosystem, and not just act as dumb pipe providers in the new economy.

"If there are several players which are weak but only one strong, this would not be real market competition," Mr Natwut said.

The merger of True and DTAC will create a strong player and will cope with challenges by changing customer behaviour, he said.

"We [the merged company] aim to be another alternative for the market with a size equal to the largest player, and we are ready to compete with global competition in the innovation market," he added.

The dominance of global digital platforms in Thailand could put the country at a disadvantage, including the lack of innovation adoption by local startups.

"The telecom sector is seen as an old definition as tech and telecom cannot be separated in the current business of convergence," said Mr Natwut.

He said global OTT platforms arrived as service alternatives, but they take advantage of the existing telecom infrastructure owned by local mobile operators without usage charges or being regulated.

True has been operating through a tech company formula for years, Mr Natwut said. True Digital Group has been serving as its digital business arm since March 2020.

True is equipped with what is called a complete ecosystem through four critical fundamental supports: True IDC as its data centre and cloud services; True Digital, which enables digital transformation; the True Digital Academy, which builds up digital talent for the future; and the True Digital Park, which serves as a 5G innovation hub. 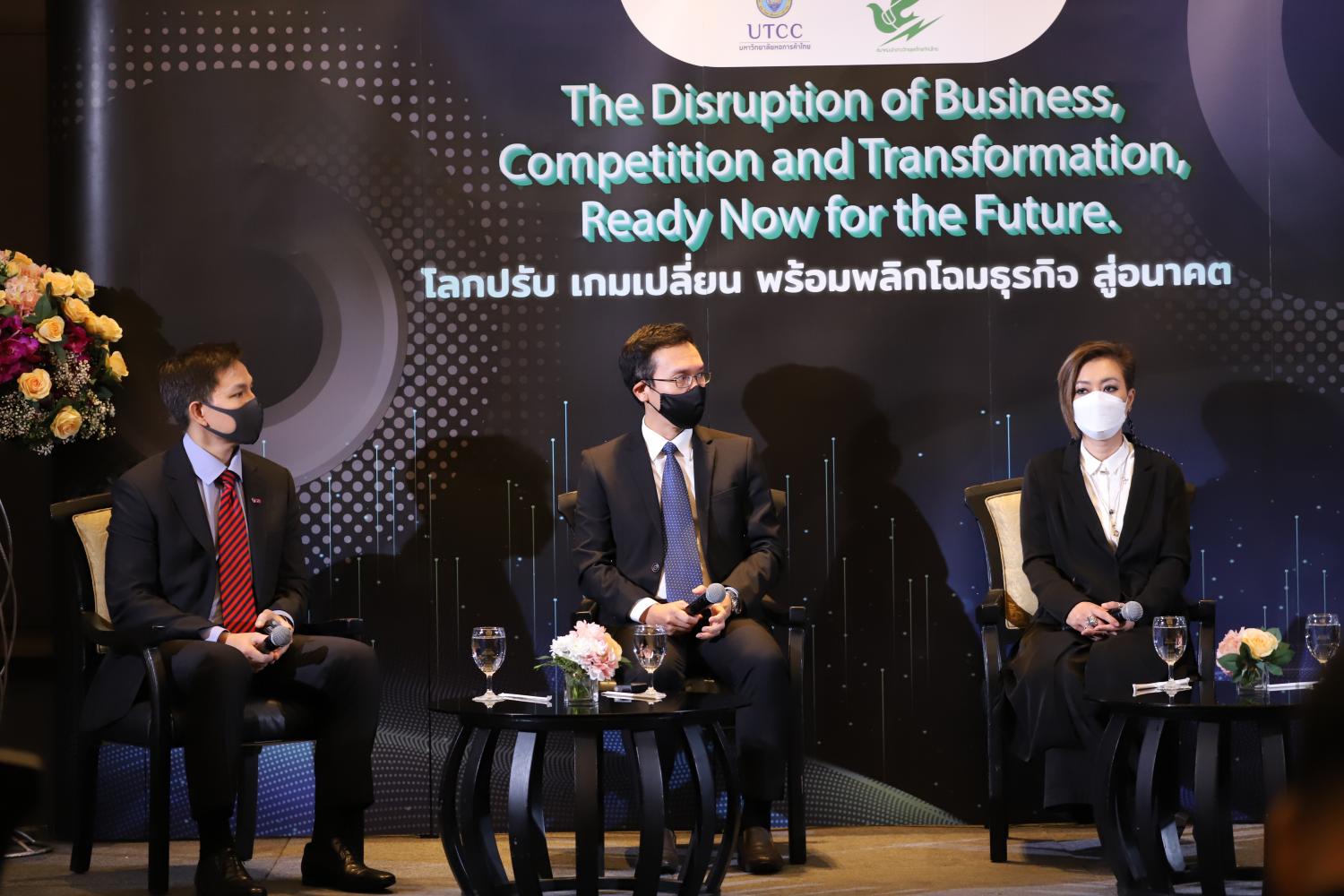 From left are Mr Natwut, Putikarn Aurat, head of people and branding at SCB 10X and chief digital assets officer at SCB Securities, and Mayuree Srikulwong, a lecturer from the School of Science and Technology, University of the Thai Chamber of Commerce.  (Photos by Wichan Charoenkiatpakul)

Mr Nopadej believes that government concessions should be encouraged to create public-private participation.

He said Thai firms should focus on building partnerships with other companies and sectors to answer market needs. He believes companies maintaining an individual identity is no longer effective in the current environment.

For the energy industry, he recommends focusing on quality, affordability and sustainability, as customers now have more awareness and value these qualities in products.

Other trends to take into consideration include healthy building design and construction, modern communities, and low-waste lifestyles.

Mr Nopadej said technology such as carbon-capture devices will play a huge role in achieving these principles.

Headline inflation outstripped forecasts to hit a near 14-year high in June, reinforcing expectations of an interest rate hike as next month.