The long road to recovery
Business

Tourism operators are calling for more government action to revive their battered industry, with many still struggling to rebound despite Thailand's reopening and rising visitor numbers

Passengers queue to check in for their flight at Suvarnabhumi airport on June 24, 2022. (Photo: Somchai Poomlard)

The Centre for Covid-19 Situation Administration (CCSA) announced on June 17 that Thailand plans to lift most of its travel restrictions and virus containment measures from July 1.

Six days later, the country reported 81 cases of local transmission from the two new subvariants, BA.4 and BA.5, which are spreading steadily in Europe.

Even though public health authorities played down concerns by insisting the subvariants still needed further study, Prime Minister Prayut Chan-o-cha instructed the Public Health Ministry to keep a close eye on the situation in Europe as next month Thailand enters a critical period as it fully reopens.

The economic recovery in the first half was tepid, but the tourism industry is touted by some as a key growth engine once international visitors are able to travel freely once again.

The Economic Intelligence Center (EIC), a research house under Siam Commercial Bank, stated if tourism doubled in the next few years, it would help offset a slowing export sector plagued by soaring inflation, the Russia-Ukraine war, and China's Covid-19 lockdown measures.

The rating agency said Thailand's economy will expand by 3.2% in 2022, up from 1.5% in 2021, bolstered by improved domestic consumption, still supportive policy settings, and a mild recovery in inbound tourism.

However, a full resumption of tourism inflows to pre-pandemic levels is expected to take a few years, particularly given the slow resumption of arrivals from China.

While the Tourism and Sports Ministry has set an ambitious goal of 10 million inbound tourists for this year, obstacles remain before the industry can fully recover. 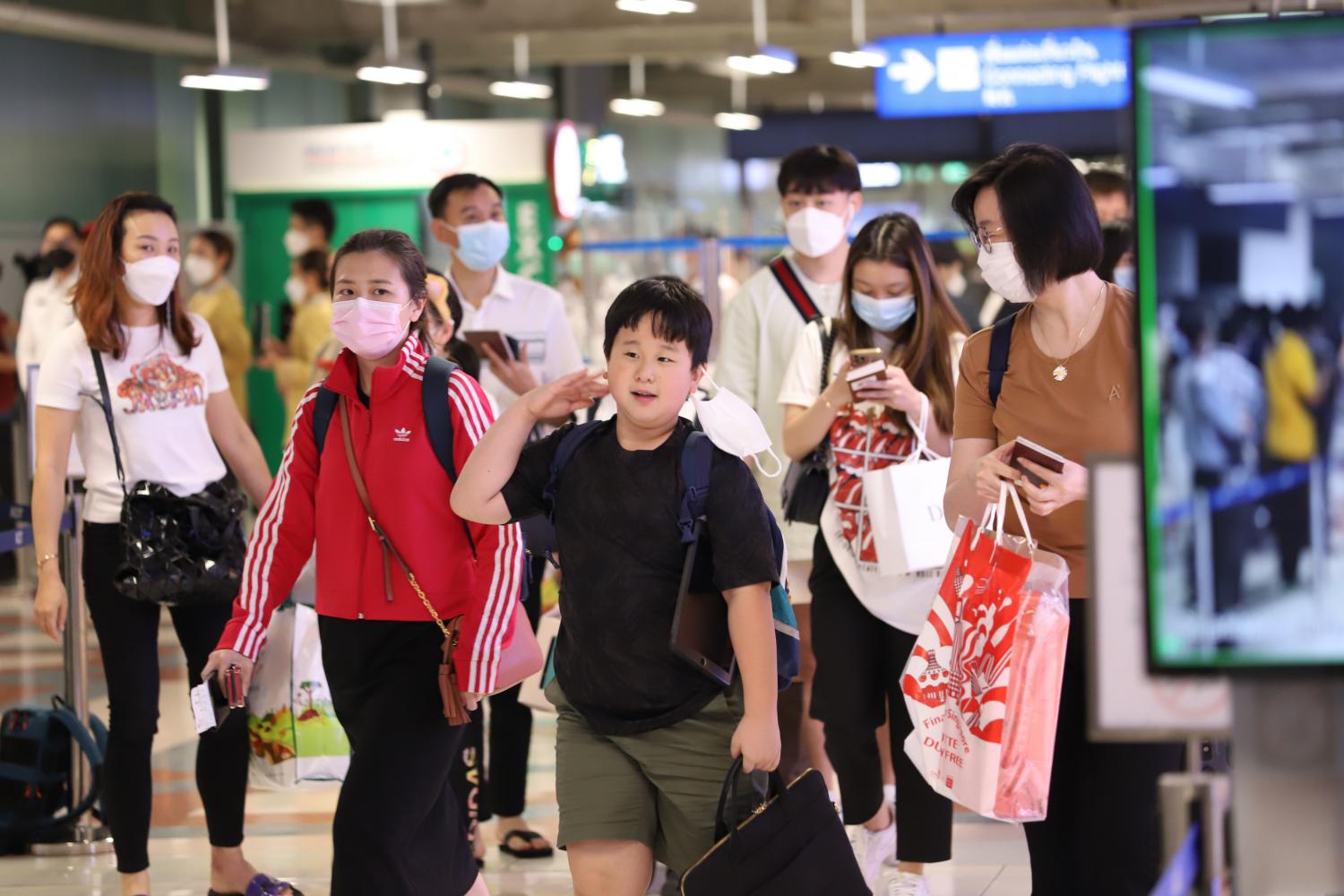 Tourist arrivals at Suvarnabhumi airport on June 24. The tourism industry is seen as the key engine after international tourists could travel freely like in the past. Somchai Poomlard

Extraordinarily long queues at check-in counters and bustling scenes at Suvarnabhumi airport earlier this month mirrored the situation at airports worldwide, which have been mired in congestion.

Marisa Sukosol Nunbhakdi, president of the Thai Hotels Association, said the country's tourism industry will need more time to see a full-fledged recovery as supply chains cannot immediately respond to a spike in tourism demand, particularly with workers who were forced to leave their jobs during the pandemic and are reluctant to return.

The shortage is becoming obvious in the aviation industry as most carriers cannot resume their pre-pandemic flight frequencies overnight after reducing operations the past two years.

"If we can have more direct flights, whether from Thai Airways International or other airlines, this will be the key to success in accelerating growth during the upcoming high season."

The goal of 10 million international tourists this year might be a tall task if there is insufficient air connections or a lack of other mechanisms to attract visitors, such as new visa policies, she said.

This month the Tourism Authority of Thailand (TAT) and tourism operators agreed the government should facilitate foreign arrivals via visa policies in the second half.

They urged the CCSA to consider a visa fee exemption, an extension of the visa-on-arrival to 45 from 30 days, and multiple or double-entry visas to let tourists enjoy two destinations on the same trip by choosing Thailand as a hub.

However, the CCSA did not approve this proposal at its June 17 meeting, prompting the TAT to seek alternative solutions.

TAT governor Yuthasak Supasorn said the agency and the private sector have not given up. The agency is preparing to make the visa proposal part of the "Booster Shot" project -- a stimulus scheme formulated in response to the prime minister's directions to the Tourism and Sports Ministry.

Tassapon Bijleveld, executive chairman of Thai AirAsia, said the service sector, particularly small and medium-sized operators, experienced financial pain during the two-year pandemic, with only minimal support from the government.

To rebuild tourism, he said the supply side needed to be able to secure soft loans from financial institutions.

"Preparations come with additional cost. Hotels that have been closed for years need renovation and maintenance before reopening, while airlines need to rehire workers," said Mr Tassapon.

He said the government should create momentum via promotions in the second half to attract tourists to the country.

"Big international events that already have a strong global fan base, whether music or sports, could be a quick win for tourism in the final six months this year," said Mr Tassapon.

"Back in 2004, after the tragic tsunami in the South, the industry gathered together to hold many events to restore tourist confidence. That model should be followed now." 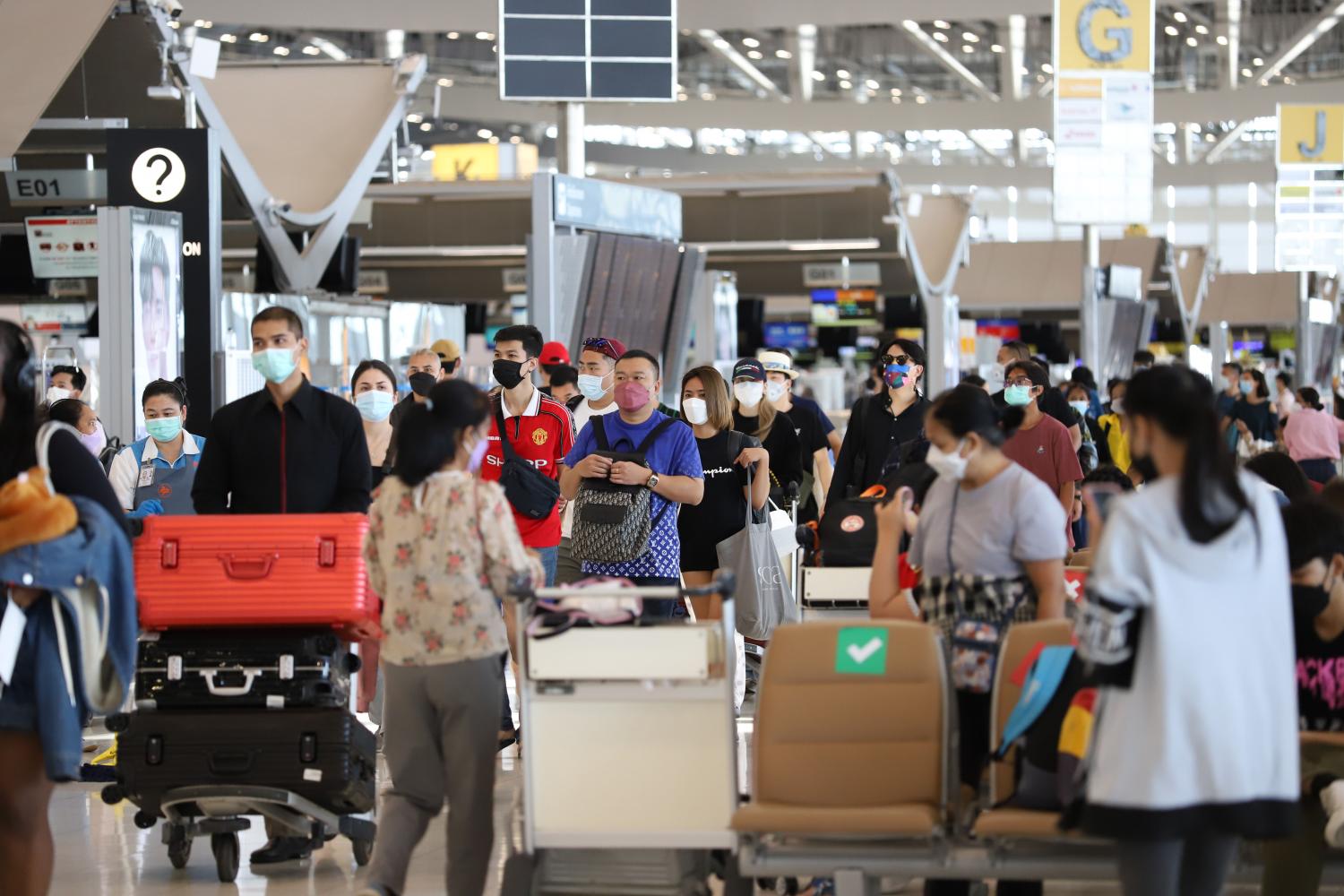 The number of international arrivals in May, after the Test & Go and Sandbox schemes were removed, was 476,171. That tally dwarfs the 265,711 visitors recorded in April, when the government cancelled mandatory pre-arrival RT-PCR testing.

Thailand has welcomed 1.9 million visitors from Jan 1 to June 22 this year, with three Asian countries in the top five, led by 204,427 Indian tourists, followed by 167,524 Malaysian travellers in second place, and 114,161 arrivals from Singapore in fourth.

The UK was the largest long-haul market, securing third place with 117,669 tourists, while the US came in fifth with 97,792 travellers. These two countries previously dominated the inbound market when the Sandbox and Test & Go entry schemes were still in place.

China was the largest source market before the pandemic, recording 10.9 million visitors in 2019, according to the National Statistical Office.

Mrs Marisa said even as Beijing starts to ease travel restrictions for business travellers and students, and may consider lifting a ban on leisure trips in the near future, as long as quarantine remains mandatory there, Chinese tourists will refrain from outbound trips.

She pointed to reports from Chinese political analysts that predicted the government would not loosen travel restrictions before the Chinese New Year in January 2023 because it does not want to endanger peoples' lives, with the fatality rate remaining a sensitive issue.

In addition, Mrs Marisa said border reopening might not be a priority for China as the country can rely on healthy domestic consumption and tourism, as seen over the past two years.

With Chinese tourists grounded during the pandemic, Thailand needed to depend on other sectors, said Kriengkrai Thiennukul, chairman of the Federation of Thai Industries.

"The Thai economy was battered by Covid-19 and then the Russia-Ukraine war, which drove up inflation, but the restoration of tourism will boost the economy," he said.

A stronger tourism sector will provide a quick economic boost for Thailand, but the addition of more tourist arrivals will not help the country recover in the long term, said Mr Kriengkrai.

"Tourists with high spending power should be the focus. To attract them, the government and businesses need to use wellness tourism as a magnet," he said. 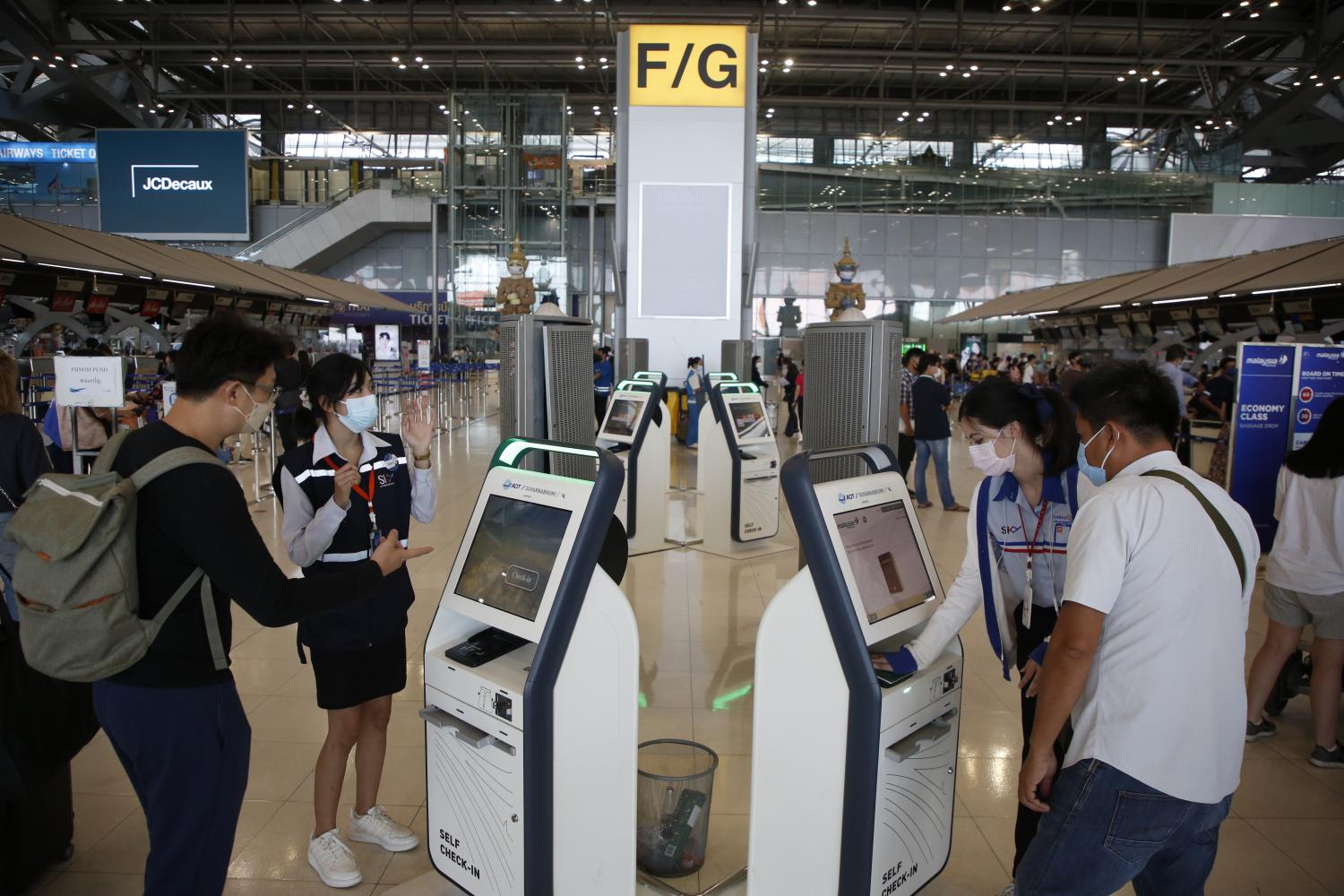 Passengers prepare to depart at Suvarnabhumi airport via self check-in kiosks. Arnun Chonmahatrakool

More relaxations of travel restrictions have put tourism in the spotlight as a key economic driver, but the sector alone cannot lift the entire Thai economy, said Mr Kriengkrai.

Tourism should work with the agricultural industry to jointly generate revenue, he said.

Mr Kriengkrai suggested Thailand develop "future food" as well as medicines and other products for sale to Thai and foreign tourists.

He urged the government and businesses to encourage research and development of new products under the bio-economy model, which promotes the use of renewable resources as raw materials to produce energy, food and other value-added products.

For example, an extracted substance from mangosteen rinds can be developed into a medicine, while hemp fibres can be used to weave cloth.

The development of these products must go hand-in-hand with ongoing plans to promote automation, robotics and digital technology, because all of them are important in driving the economy forward, Mr Kriengkrai said.

He also supports a proposal to end the emergency decree, which lets authorities control Covid-19 outbreaks, and replace it with regulations and practices to prevent new infections.

"Revoking the emergency decree will boost the confidence of tourists and investors, who can increase their visits to Thailand," said Mr Kriengkrai. 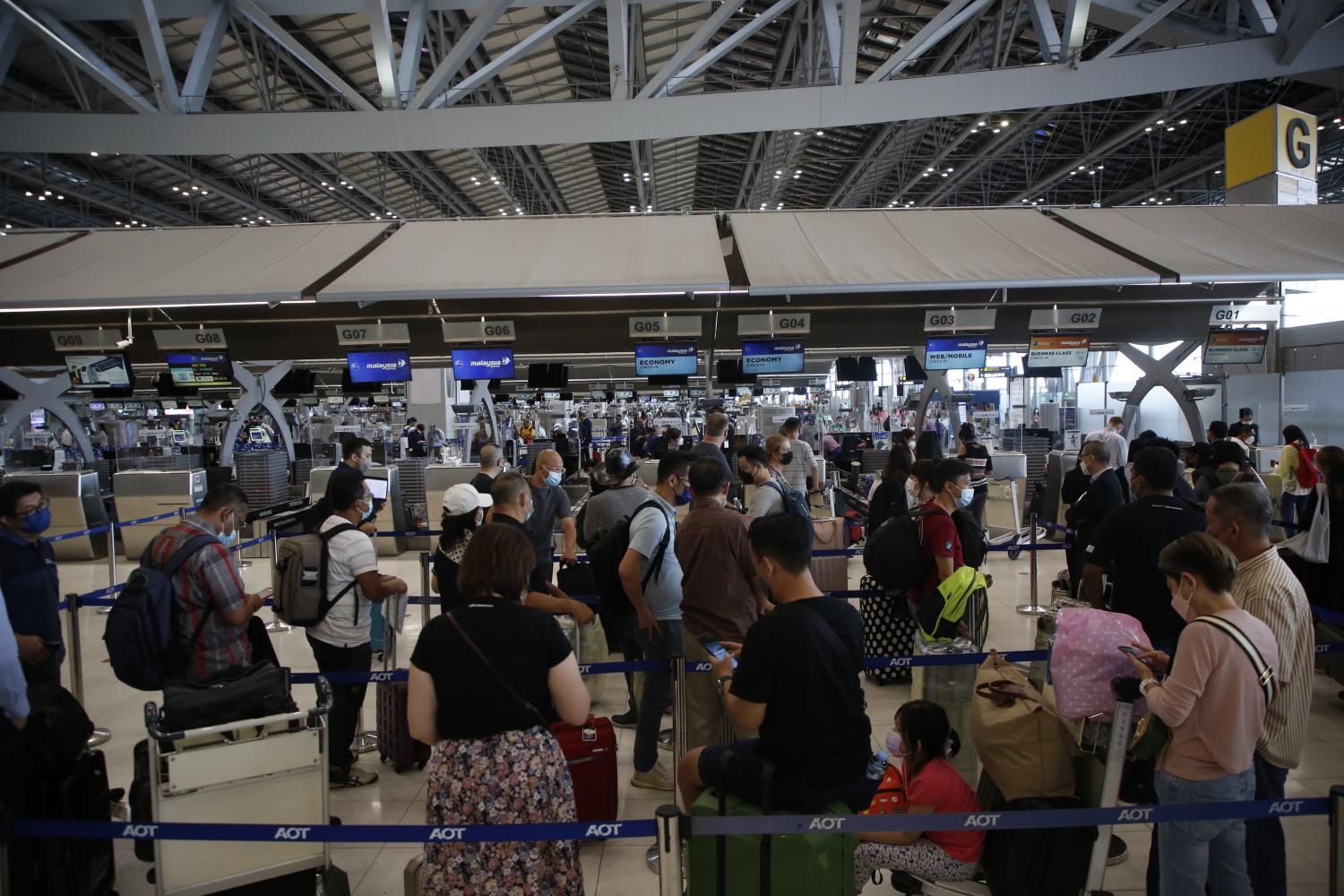 Passengers queue to check-in for their flight at Suvarnabhumi airport. Arnun Chonmahatrakool

Chamnan Srisawat, president of the Tourism Council of Thailand, said the council remains confident in its prediction of 12-16 million visitors arriving this year thanks to positive signs of recovery over the past few months.

Mr Chamnan said tourism is the only quick-win economic engine available to Thailand, which many other countries are also pushing to help revive their economies.

He said the government and tourism operators need to closely work together as tourism faces three separate challenges: the pandemic, the Russia-Ukraine war, and tourism competition from other nations.

Mr Chamnan said the second half of this year remains uncertain because mutations of the virus continue to spread around different continents.

He said the government should learn from the past by prioritising the economy rather than mandating stringent containment, which inflicted deep pain on the tourism industry over the past two years.

"The council is not worried about the new subvariants as long as the country remains open," said Mr Chamnan.

"The government should benchmark itself to leading countries such as Singapore before rolling out any public health policy, in case there are new virus threats in the future."

He said Thai tourism also needs effective strategies jointly developed by the public and private sectors, such as those focused on wellness, sport, gastronomy or Mice (meetings, incentives, conventions and exhibitions).

Mr Chamnan said this means every government ministry should integrate its policies, making tourism part of the national agenda in order to see real impact.

For instance, soft power promotion by the Culture Ministry should be adopted by all related parties, while the Finance Ministry should offer soft loans to help the private sector accomplish the goal more easily.

The Digital Economy and Society Ministry could help develop software focusing on tourism big data to capture potential markets, while the Labour Ministry could provide soft skills training to strengthen services on the supply side, he said.

"We have to move forward with other solutions that will not hurt the industry as in the past," said Mr Chamnan. 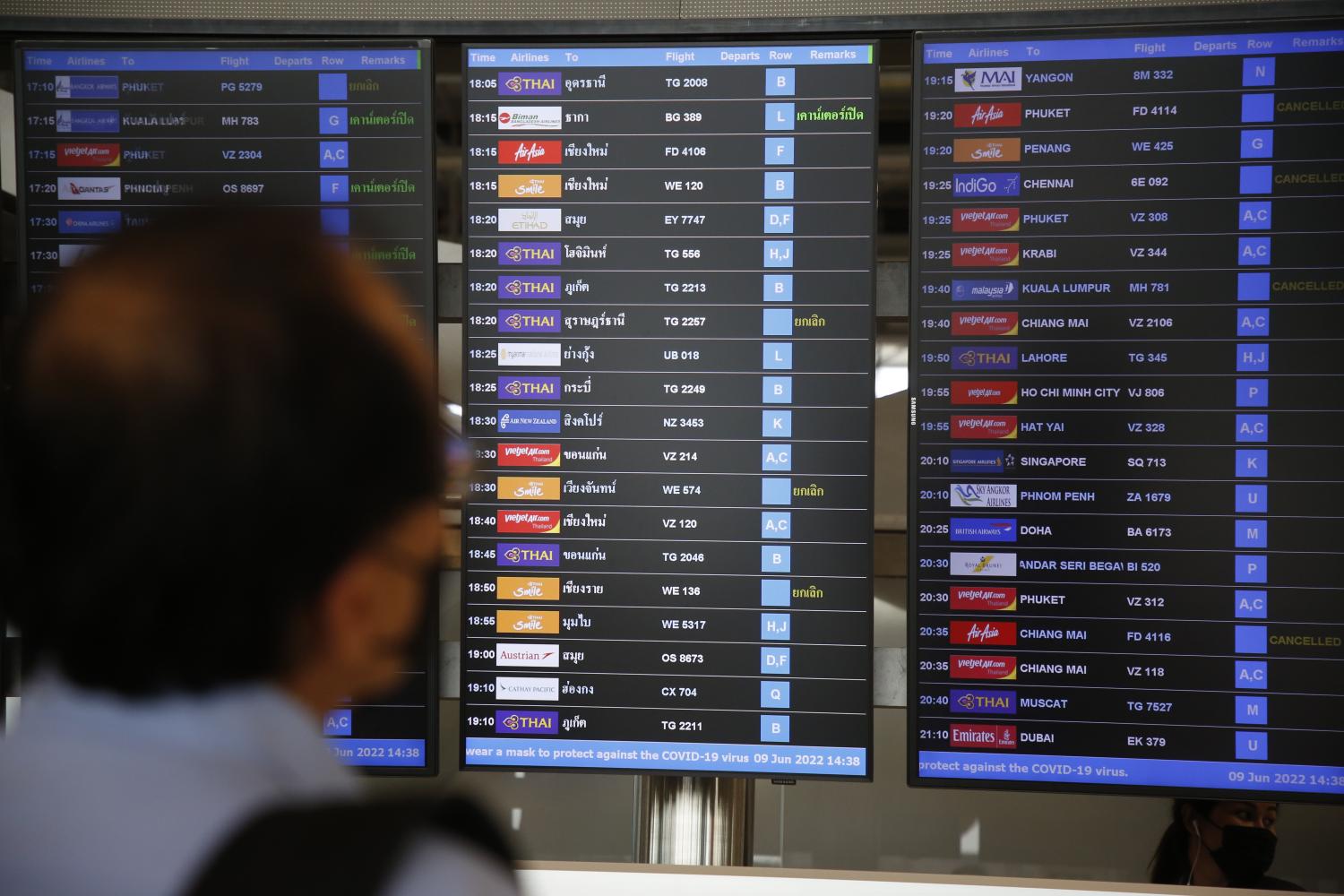 A passenger examines a flight information board at Suvarnabhumi airport. Arnun Chonmahatrakool 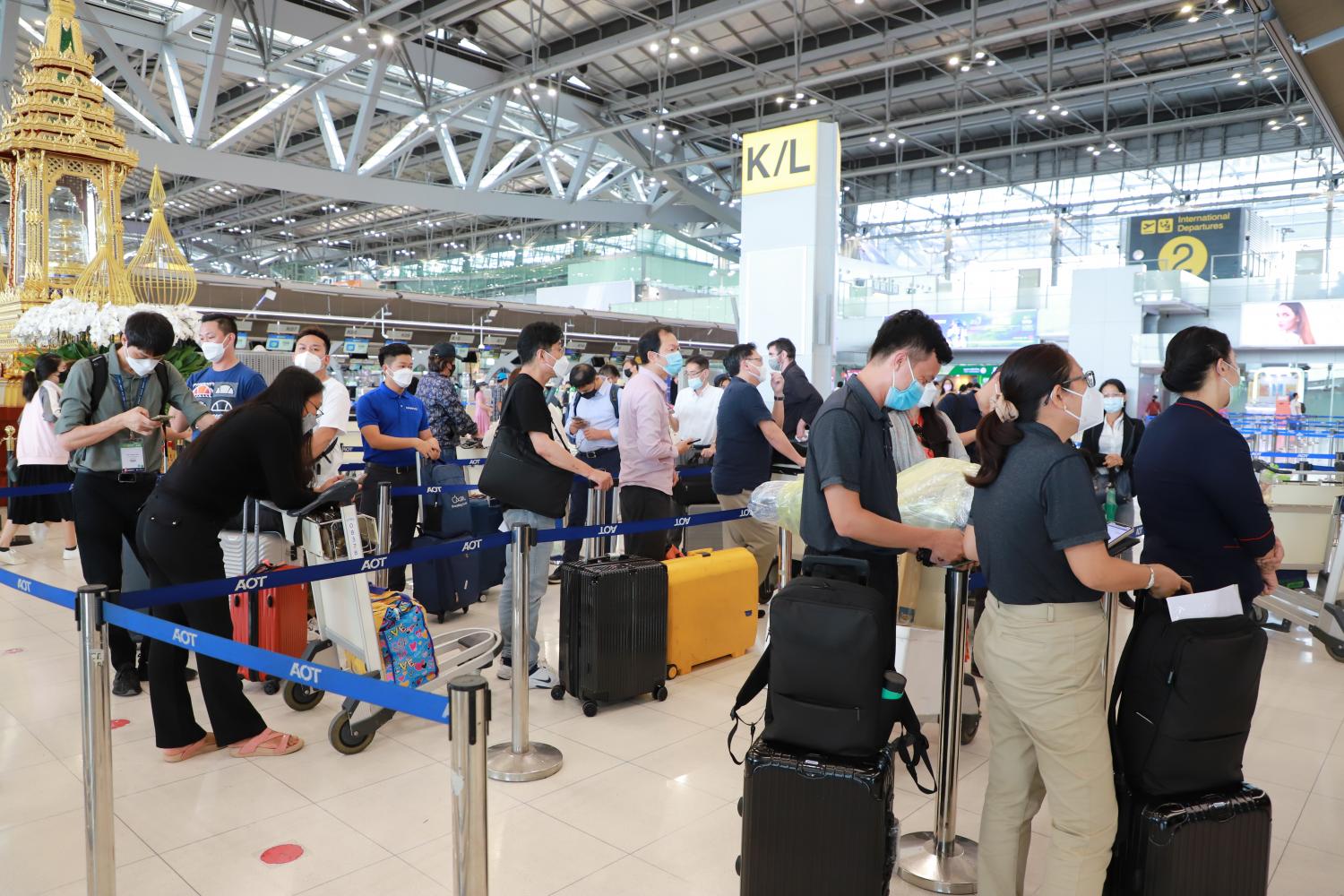 Passengers queue to check-in for their flight at Suvarnabhumi airport on June 24. Somchai Poomlard