A man pulls a heavily loaded cart through Bangkok's Sampeng market near Chinatown. The market is open even as Covid-19 sub-variants are monitored. (Photo: Apichart Jinakul)

The new viral strains come as most people are vaccinated, with 76.4% of the 70 million inhabitants of Thailand inoculated with two doses of vaccine and 42.6% receiving more than two shots as of June 30, according to the Public Health Ministry.

While people have some level of protection against the virus, businesses have less immunity to financial troubles, leading to more shutdowns in certain sectors. 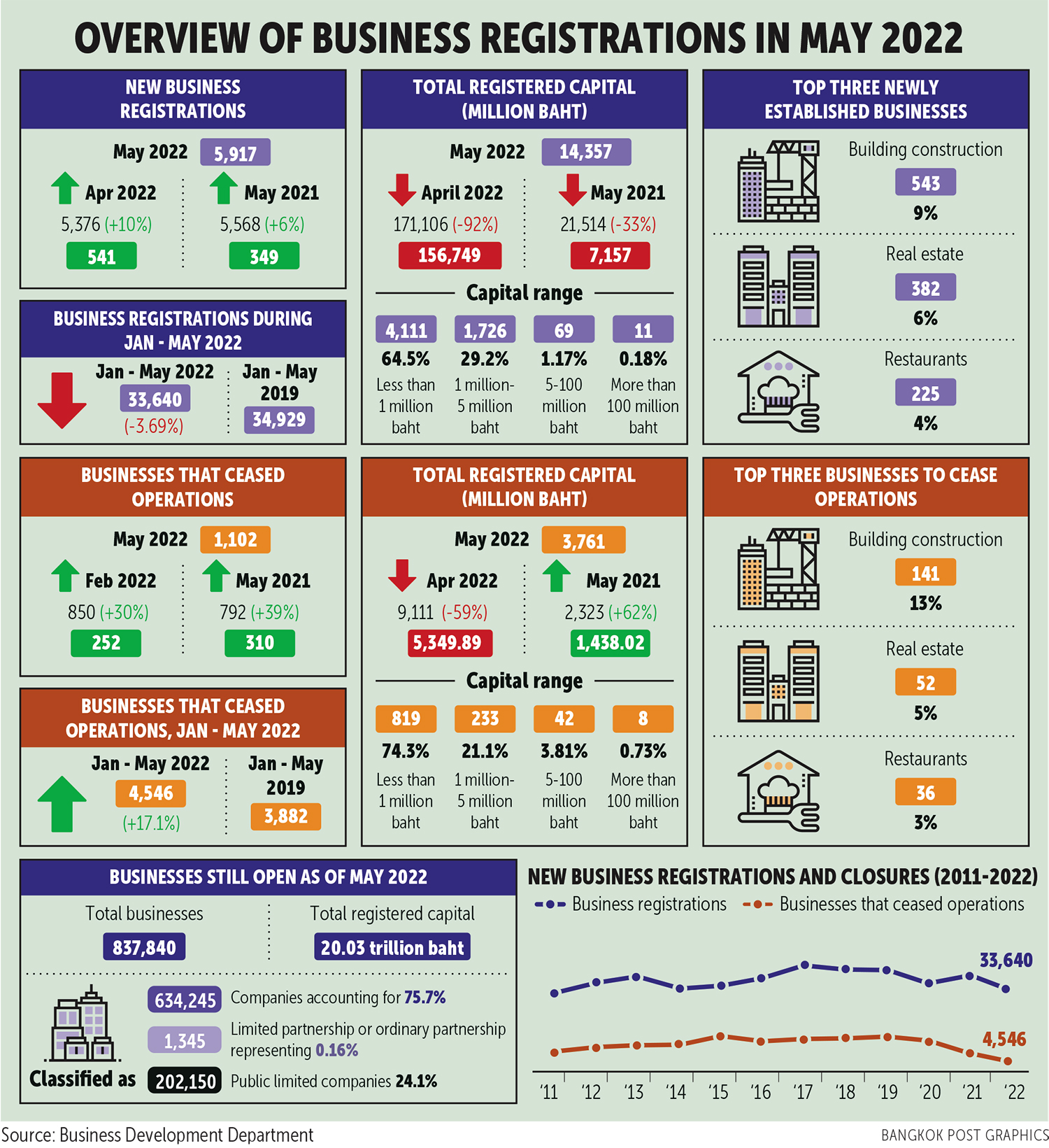 Somchai Pornrattanacharoen, president of the Wholesale and Retail Trade Association, said people are now less afraid of infections because of the hardships they experienced from outbreaks the past two years.

"Most people and businesses became poorer after two years of difficulties and an economic slowdown caused by the Covid-19 outbreaks. People are concerned now about their livelihoods and the cost of living," said Mr Somchai.

"I would like the government to understand and have a true commitment to tackling the problems of people who are really suffering from poverty."

He proposed the government take better care of small-scale traders and vendors who sell goods or food for a living.

In addition, farmers should be one of the first groups eligible for state assistance, said Mr Somchai.

He also called on the government to help lower manufacturers' production costs and promote border trade, especially for agricultural products.

"The government must take care of small traders and entrepreneurs to allow more options for trading or doing business to earn a living. Rules and regulations have to be relaxed and adjusted to facilitate doing business to allow them to earn more income to support their families," said Mr Somchai.

"If the government can do this, it will help the economy to bounce back and be more active."

Sanan Angubolkul, chairman of the Thai Chamber of Commerce, said most of the patients infected with the sub-variants are foreigners, with the number of infected Thais a small number.

He said medicines are now available to treat infections and people can access them, making Covid unlikely to affect the economic recovery.

"The chamber still advocates self-defence during this period, meaning cleanliness and continued mask-wearing in crowded places. We need to continue to monitor infection levels." 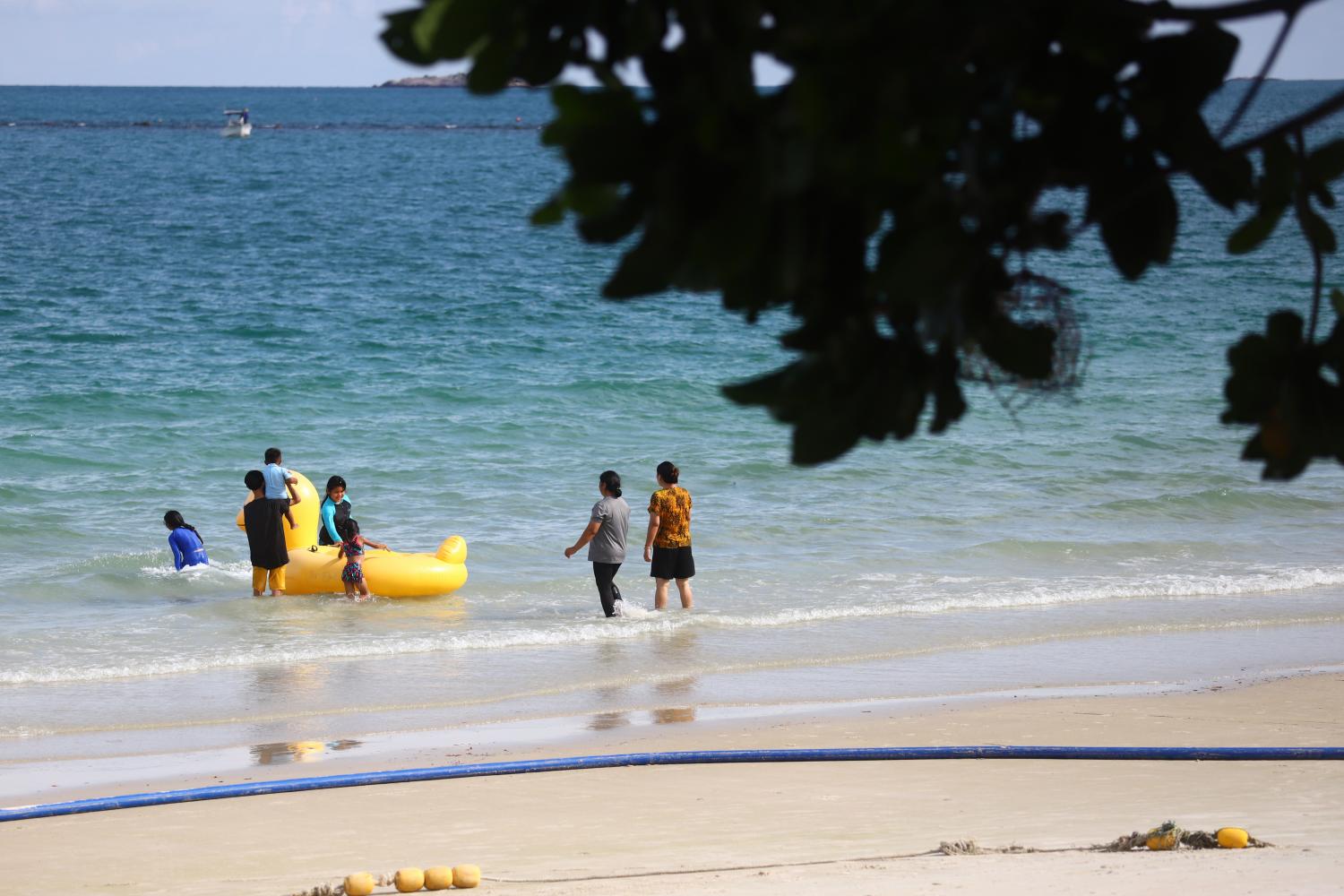 Tourists play at the beach in Koh Samet. Nutthawat Wicheanbut

She said the country is just entering the early stage of recovery, with the number of foreign arrivals expected to tally 7-10 million this year, far below the almost 40 million in 2019.

A recent THA survey found the employment rate in the hotel sector is only 68% of the level in 2019, while 54% of hotel operators said they could not recruit skilled workers that are essential for the service sector.

Moreover, 27% of respondents earned revenue that amounted to 11-30% of the total in the pre-pandemic period, while 19% earned less than 10% of the tally before the crisis.

"If there's a new viral wave, we should learn to live with it without imposing any restrictions," said Mrs Marisa.

"We still face a lot of obstacles in our effort for a full reopening, led by a lack of skilled staff as employees don't want to return to unsecure jobs."

She said THA and the Tourism Authority of Thailand last week discussed this issue and agreed foreign workers are needed to fill positions that don't require high skills, such as cleaning and gardening.

However, Thai labour law requires private companies to use authorised agents for such hiring, which entails additional management costs, prompting the THA to seek eligibility for hotels to hire migrant workers directly.

Mrs Marisa said hotels in second-tier tourist destinations are struggling to maintain revenue as they have not benefited from the reopening policy and have less income from domestic guests, particularly from state meetings and seminars, which have cut back on budgets for years. 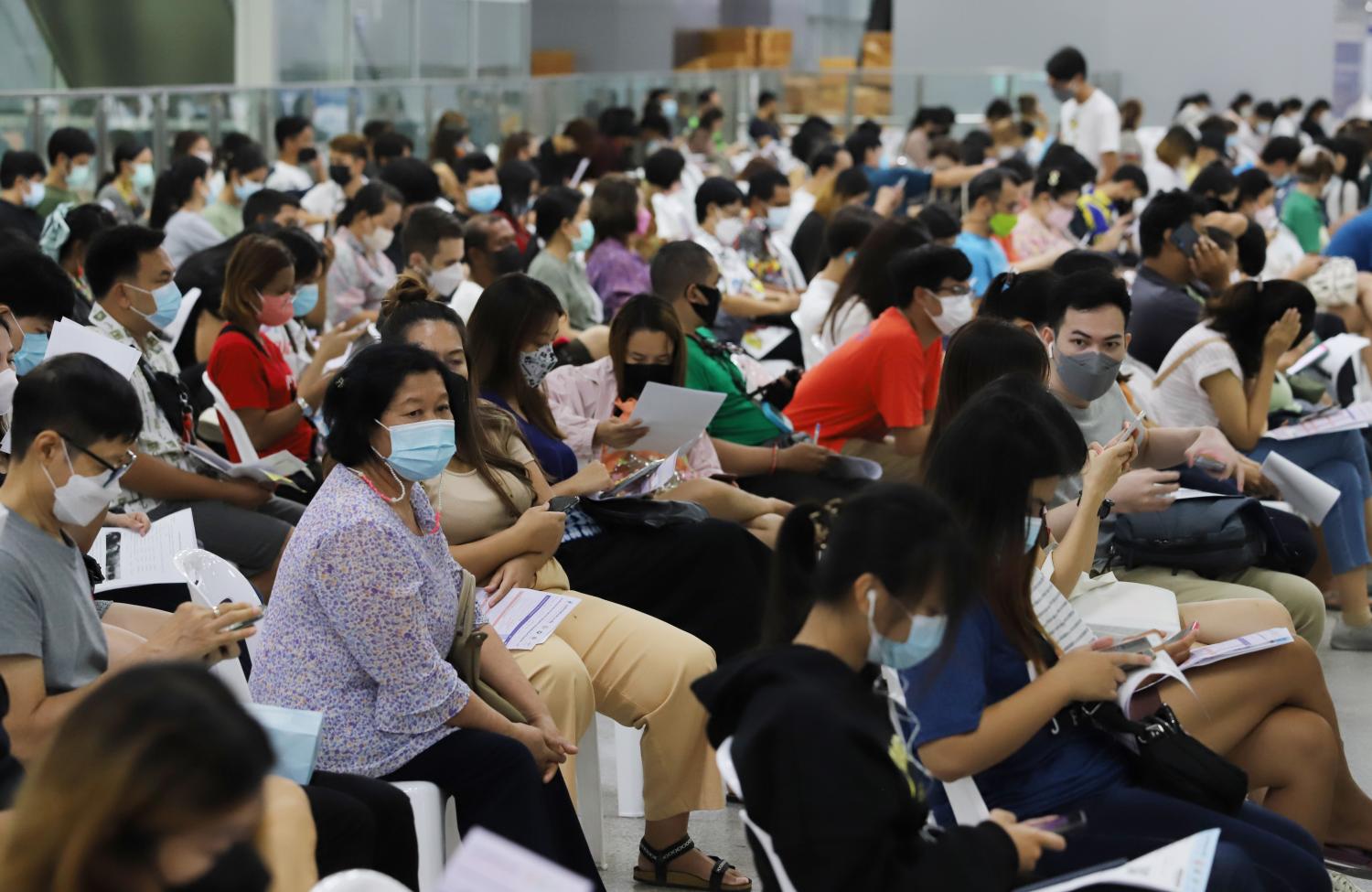 The Federation of Thai Industries (FTI) believes the industrial sector will be lightly affected by the Omicron sub-variants as it becomes the key economic engine for the economy in the second half.

Kriengkrai Thiennukul, chairman of the FTI, said he is aware Covid-19 mutations will continue, but is not overly worried because preventive measures remain in place at factories.

Many factories joined the government's "Thai Stop Covid" scheme last year. The measure assesses hygiene standards at factories and those with acceptable standards are given e-certificates.

Another measure is "Bubble and Seal", which was used for factories with more than 200 workers. It is aimed at restricting travel by employees.

Workers may need to stay in factories or only travel between their dormitories and workplaces, according to media reports.

"We are always braced for a possible new outbreak, but we gained experience in dealing with the virus," said Mr Kriengkrai.

The Thai economy sagged as repeated Covid-19 outbreaks since 2020 led to various restrictions on activities.

Then as the pandemic seemed to be controlled in Thailand, the Russia-Ukraine war that started in February 2022 contributed to higher energy prices and soaring inflation.

However, he said he is confident businesses will survive the crises because they have risk management plans.

"The reopening of the country provides hope for businesses as tourism is expected to resume. But we still need to be careful about possible infections caused by tourists," said Mr Kriengkrai.

During the war, exports will remain an economic driver, he said.

"Processed food manufacturers are exporting more and will generate up to 1.2-1.3 trillion baht this year because of higher purchase orders from overseas," said Mr Kriengkrai.

The FTI chairman said he saw no sign of layoffs or plans to reduce staff.

Mr Kriengkrai said earlier the number of Thai and migrant workers in the food industry was estimated at 500,000, but after the onset of Covid-19, up to 300,000 workers disappeared.

If there is no setback caused by a new outbreak, more tourist arrivals should help boost the economy, he said.

Before the Omicron sub-variants hit the headlines, Covid-19 was not listed among the top concerns of factory operators in a survey conducted by the FTI to calculate the Thailand Industry Sentiment Index in May. Some 1,323 enterprises across 45 industry clubs under the FTI were interviewed.

Covid-19 was viewed as a factor of "decreasing concern", according to the findings.

The higher price of energy was the top concern, receiving 85.5% of votes, followed by worries over the global economy (65.7%) and concerns about the domestic economy (59%). 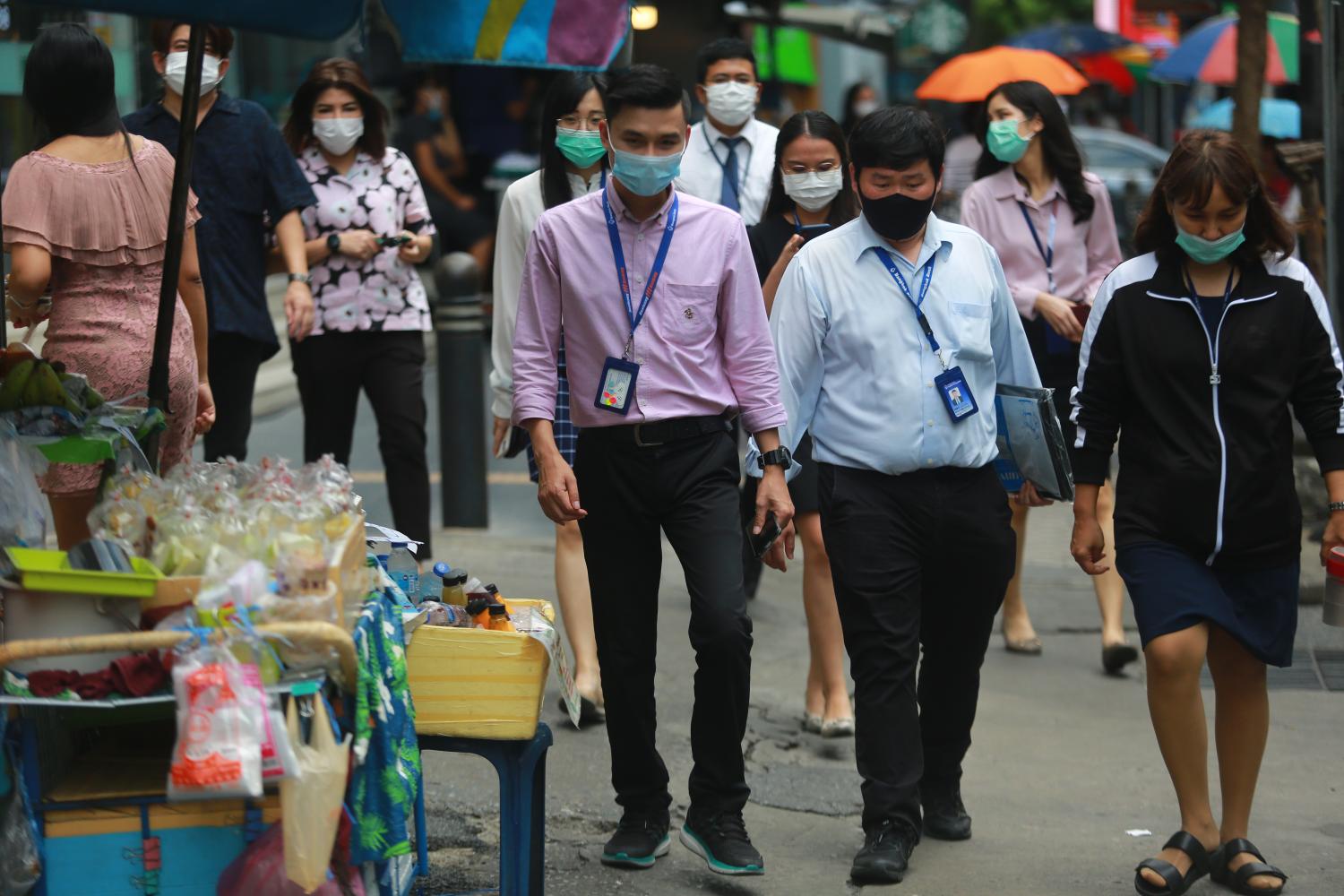 When Thailand was severely hit by the Delta variant in mid-2021, the manufacturing sector recorded an alarming number of infected workers.

The Industry Ministry reported last August infections were found in 13 factories on average daily, with the food and electronics industries at the top of the caseload table.

The numbers were based on a survey of 749 factories in 62 provinces between April 1 and Aug 17.

In total, up to 53,135 infected workers were identified during the survey.

According to the findings, the top five industries where infections were reported were food (136 factories), followed by electronics (103), metal (65), garments (64) and plastics (57).