Higher prices of food products have been driven by the hidden costs of energy in food production and logistics. (Photo: Somchai Poomlard)

Price pressures will persist into the third quarter, the Commerce Ministry has admitted, after the country's headline inflation rate hit a near-14-year high in June.

The Trade Policy and Strategy Office under the Commerce Ministry reported on Tuesday that headline inflation, gauged by the consumer price index (CPI), rose 7.66% year-on-year from June 2021, accelerating from 7.1% in May and 4.7% in April.

Ronnarong Phoolpipat, director-general of the Trade Policy and Strategy Office, said the main drivers of inflation in June were energy prices, including fuel, electricity, and liquefied petroleum gas, alongside food and non-alcoholic beverages.

In addition, the price rises reflected the low base effects from last year.

Higher prices of food products (such as pork, chicken, eggs, and seasoning) have been driven by the hidden costs of energy in food production and logistics.

According to the ministry, CPI increased by 0.90% on a monthly basis, decelerating from a rise of 1.4% in May.

A slower inflationary momentum was partly due to government measures, as well as a partial retail price freeze in collaboration with manufacturers to ease the burden of the rising cost of living. 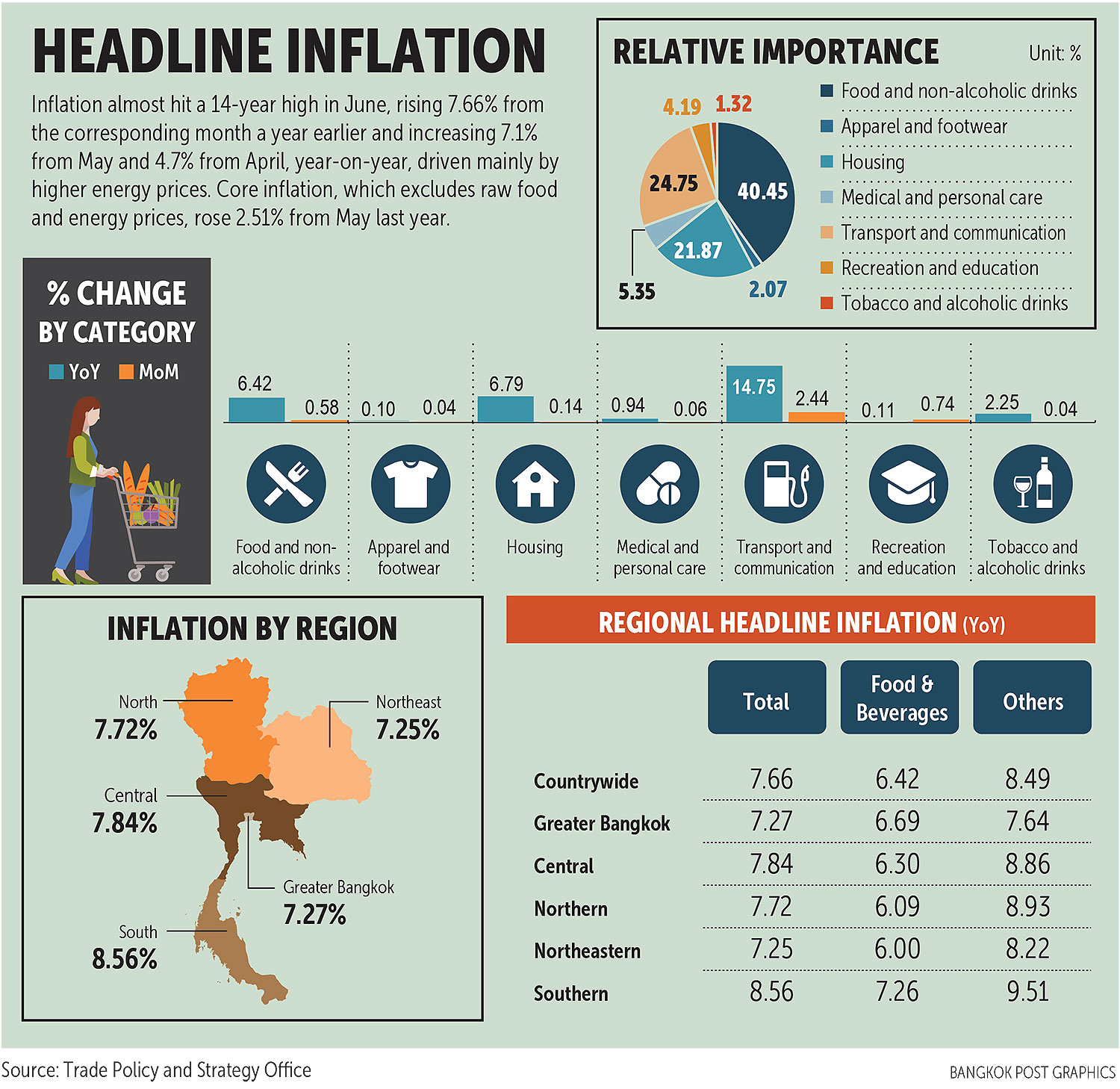 Mr Ronnarong said inflation in the third quarter of 2022 was set to remain high, close to the previous quarter's rate of 6.46%.

Thanavath Phonvichai, president of the University of the Thai Chamber of Commerce (UTCC), said June's inflation spike stemmed largely from a continuous surge in energy prices, particularly diesel prices which rose to 35 baht per litre, and consumers' recovering purchasing power which was boosted by the country's full reopening and higher production costs.

According to Mr Thanavath, the world's oil prices have started to stabilise but inflation remains relatively high, with the rates expected to move in a range of 7-9% in the third quarter and 6-7% in the fourth quarter.

He also predicts the inflation rate for the whole year to stay at 5.5-6.5%.

Mr Thanavath also expects the Bank of Thailand to start raising its benchmark interest rate next month to tame rising inflation, with 2-3 hikes possible this year.

Nuttachart Mekmasin, research manager at Trinity Securities, said if inflation stayed above 7% then the real interest rate spread between Thailand and the US would widen, which would further weaken the baht. This is seen as an important reason as to why the Bank of Thailand would need to raise interest rates by 0.25% at its next meeting.

He said the baht is likely to continue to weaken after May saw Thailand's current account deficit hit a new high of US$3.7 billion.

Trinity Securities said the direction of global stock markets in July is likely to be determined by the American CPI inflation rate, to be released on July 13, which would affect the Federal Reserve's interest rate expectations and determine any US hike later this month.