A man converses with a member of staff at a KBank currency exchange booth in Bangkok.  (Photo: Somchai Poomlard)

The currency of Southeast Asia's second-largest economy hit a seven-year low of 36.35 baht against the greenback last week. Nonetheless, analysts feel upbeat about the baht's future in the second half of this year.

Q: What are the factors driving the baht's volatility?

The market research and advisory unit of CIMB Thai Bank said that the baht is under pressure as Thailand has a relatively low interest rate of 0.5%, which has resulted in outflows to higher-yield countries, including the US.

Many analysts believe the Bank of Thailand's Monetary Policy Committee will raise the policy rate by 25 basis points at its next meeting in August in response to persistently high inflation. 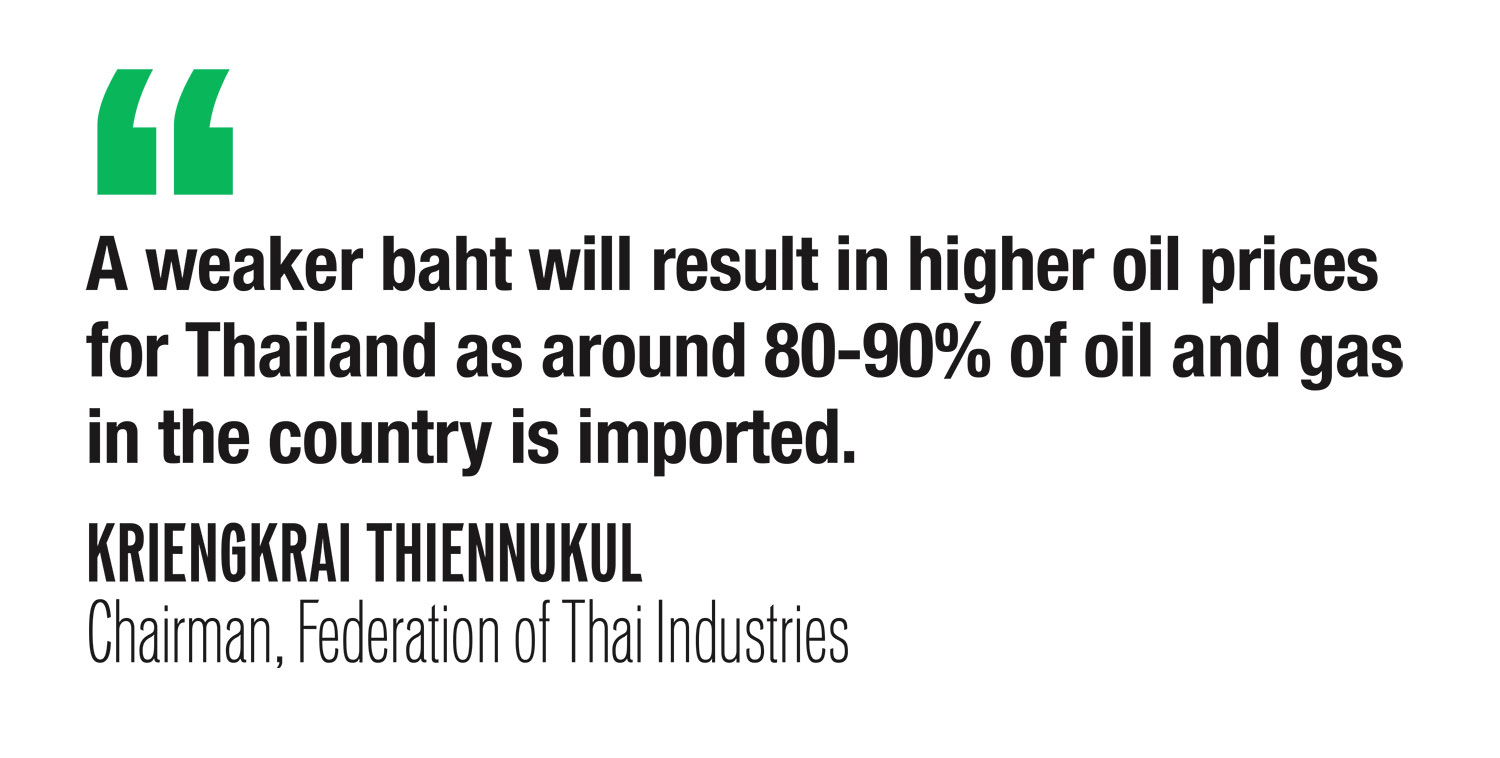 "Rising baht volatility is in line with the highly volatile global market amid concerns over the Fed's aggressive rate hikes, the Covid-19 situation in China, as well as increasing concerns over economic recession in major economies like the US and Europe," he said.

Mr Poon added that domestic factors driving the baht's movement include uncertainty over the country's central bank policy outlook, its mounting concerns over a nearly 14-year-high inflation rate, and another wave of Covid-19 in the country.

"Fundamental factors like current account deficits from high imports due to elevated energy and commodities prices, high shipping costs and the gradual return of foreign tourists [not high enough to balance the current account] also explain why the baht has been weakening," he said.

Concerns about the global recession coupled with rising US interest rates have also prompted many investors to leave developing markets.

"The recent weakness in the baht beyond the 36 level [almost hit its strong resistance of around 36.50] was caused by the persistently strong dollar against major currencies," Mr Poon added. "Also, foreign fund outflows from Thai assets, especially equities due to global market risk-off from recession fears, weakened the baht."

Q: What are industry leaders saying?

The Federation of Thai Industries (FTI) recently warned against the currency further depreciating to 37 baht against the US dollar, claiming it would make life even more miserable for businesses and households because of higher oil prices.

Although tourism operators and exporters may reap benefits after the value of the baht fell last week to 36.35 to the dollar, the lowest in almost seven years, the effect on manufacturers and consumers will not be as pleasant, said the federation.

A weaker baht will result in higher oil prices for Thailand as around 80-90% of oil and gas in the country is imported, said Kriengkrai Thiennukul, chairman of the FTI.

Higher energy prices increase production costs in the manufacturing sector, which eventually cause people to pay more for goods and services.

However, export and tourism businesses can take advantage of baht depreciation as goods and services from Thailand will become less expensive to the rest of the world.

"The tourism sector may recover faster if more foreign tourists visit Thailand this year," he said, estimating foreign arrivals at 7-10 million in 2022.

The Employers' Confederation of Thai Trade and Industry said an appropriate value for the baht was around 34 to the dollar. This rate would bring the most benefits to the Thai economy, said vice-chairman Tanit Sorat.

Q: What did Thailand's central bank say it would do to handle the weak baht?

The central bank chief added that the baht's weakness is still in line with regional currencies, especially given the strong dollar. He suggested businesses should hedge against risks as the dollar may depreciate.

A Finance Ministry source who requested anonymity said the baht's value would rebound in the second half of this year as Thailand's economy continues its recovery and the country's current account deficit narrows due to returning foreign tourists.

In addition, several analysts expect the Bank of Thailand to raise the policy rate at its next meeting in August.

All these factors suggest the average baht value will not fall significantly throughout the rest of the year, the source said.

Q: How is the Thai baht performing when compared to other EM currencies?

The MSCI Emerging Markets Currency Index, which serves as a benchmark to gauge performances of emerging-market currency holdings, has fallen 4.4% this year and is on track for its steepest annual decline since 2015.

"[The baht] is similar to other EM FXs, especially net energy/commodities importers like Thailand. However, high beta and high yield EM FXs that are facing extremely high inflation environments like TRY [the Turkish lira] and ARS [the Argentine peso] have performed poorly so far this year," Krungthai Bank's Mr Poon explained.

Since the beginning of the year, the baht has weakened by almost 8% against the dollar. The Philippine peso has dropped to its lowest level against the greenback in 17 years, while the South Korean won is at its weakest in 13 years.

Meanwhile, the Russian rouble recently fell to an almost four-month low due to gains by the dollar, but the rouble managed to bounce back on Monday to 61 against the greenback.

Bangkok Bank economist Nisara Vadee indicated that all the 23 major emerging market currencies tracked by Bloomberg have weakened over the past month as the US central bank has raised its benchmark interest rate at its two recent meetings. As a result, rising interest rates mean higher costs for those emerging market countries borrowing in strong currencies, especially the dollar.

Q: What is the outlook for the Thai baht in the second half of 2022?

Krungthai Bank expects a stronger Thai baht in the second half of 2022 and going forward, in line with what the Bank of Thailand has said.

"Supporting factors for a stronger baht will be growing numbers of foreign tourists which could exceed our initial estimate of 6.4 million, easing supply disruption, more demands for Thai assets, especially equities from foreign investors to bet on the reopening theme, and finally a weakened US dollar," Mr Poon said.

Foreign arrivals in the first six months of this year tallied 1.98 million. The Tourism and Sports Ministry projects 9 million arrivals for the year.

Since it would not be until the fourth quarter that Thailand sees possible surges in foreign arrivals as per Krungthai Bank's expectations, Mr Poon said it was crucial to pay close attention to the US Federal Open Market Committee to gauge its hawkishness this month.

"We think the reversal of the US dollar could be quite important. For the US dollar to reverse the rising trend, we think the Fed will have to reach the peak of hawkishness if incoming June CPI data does not rise beyond 9%, stable or falling 5-year inflation expectations and other economic data like the labour market show more signs of weakness," he concluded.

ThaiBev commits up to B8bn for expansion

Thailand will legalise abortion up to 20 weeks, the government said on Tuesday, relaxing pregnant people's access to the previously restricted medical procedure.