Welcome to the high season
Business

Welcome to the high season

The legalisation of cannabis offers a recreational channel for the industry, but operators need to tread carefully

From an economic standpoint, cannabis can help drive tourism and tax revenue, as well as promote job creation.

Thailand is the first country in Southeast Asia to legalise cannabis, removing it from the Category 5 narcotics list after being published in the Royal Gazette on June 9.

Amid the rising trend of cannabis use, tourism operators are seeking ways to benefit from the decriminalisation of the plant, such as promoting it for medical use.

Tourism Authority of Thailand (TAT) governor Yuthasak Supasorn said his agency has no plan to promote cannabis tourism at this moment, as the legalisation took place near the end of the fiscal year, which is Sept 30.

The TAT is awaiting further clarification from the Public Health Ministry in terms of policy and communication to make people understand the health and medical factors. 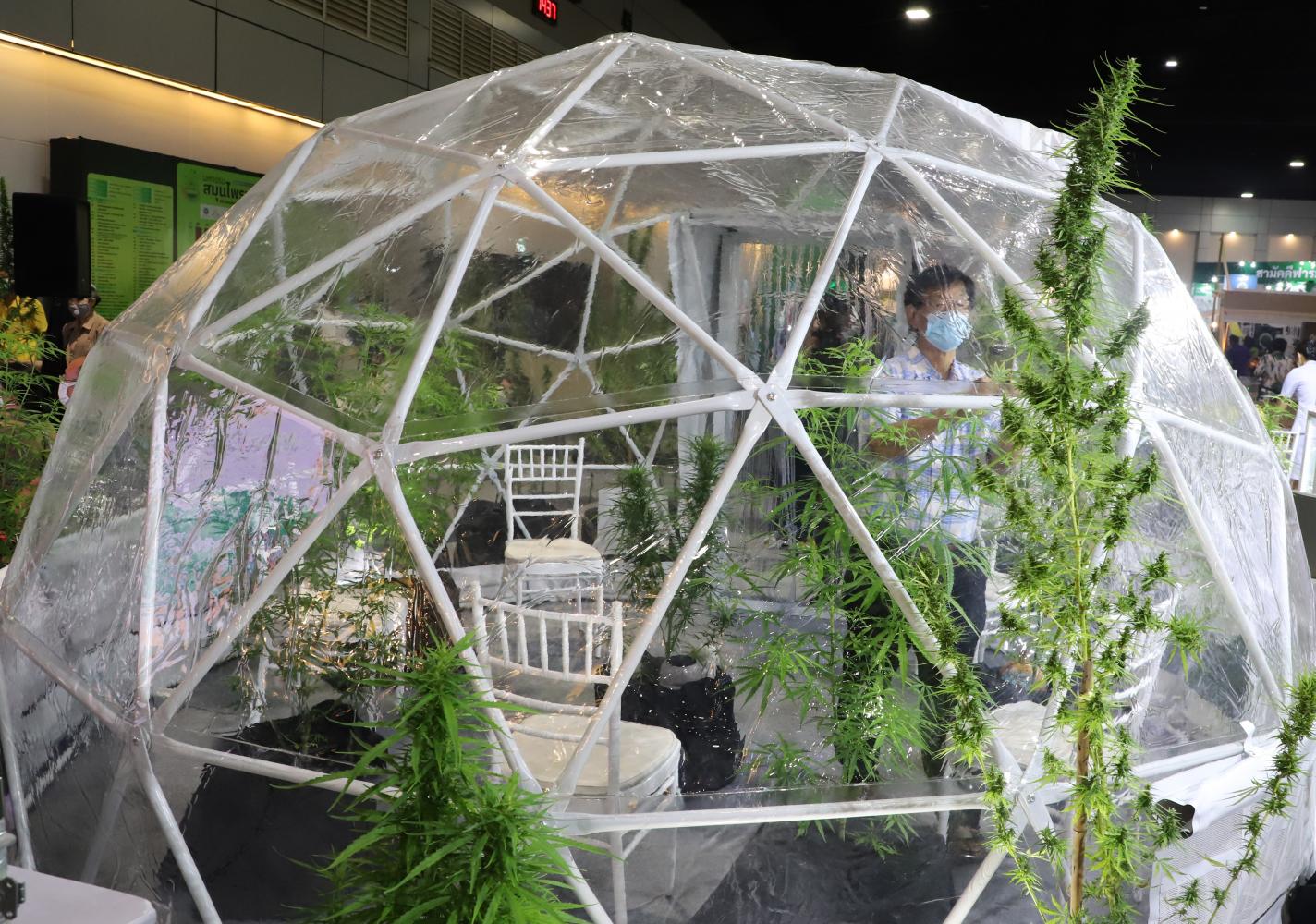 A visitor enters a dome and smells the aroma extracted from cannabis at Thailand Herbal Expo held at Impact Muang Thong Thani in June 2022. Pattarapong Chatpattarasill

Despite being decriminalised in Thailand, cannabis remains illegal in most Asian countries, with penalties ranging from fines, deportation and travel bans to life sentence jail terms or even the death penalty.

Sisdivachr Cheewarattanaporn, president of the Association of Thai Travel Agents, said tourists have to consider the risks of consuming foods and drinks that contain cannabis if the plant is considered a narcotic in their home country.

The viral news of cannabis being sold without a licence on Khao San Road also sparked health and safety concerns among tourists, which could create a bad image for Thai tourism.

At the end of June, several Thai embassies including those in China, South Korea, Singapore and Japan warned people travelling from Thailand not to bring cannabis or cannabis-based products to their countries.

Mr Sisdivachr said Chinese tourists face harsh penalties if they are selected for drug tests and cannabis or hemp is detected.

He said there is concern about strict travel policies being enacted in Asian countries to prevent people from using cannabis in the event Thailand launches zoning for recreational cannabis use in tourism areas in the future.

Countries with strict laws might even roll out a temporary travel ban to Thailand or revoke the licences of tour operators who bring tourists here for cannabis-related activities, said Mr Sisdivachr.

The government should introduce comprehensive guidelines on cannabis usage to create confidence that Thailand can effectively control cannabis tourists if new zones are created, he said.

"The government has to thoroughly consider the pros and cons as well as other countries' reactions to this issue before imposing more cannabis-related regulations to truly benefit tourism and the economy," Mr Sisdivachr said. 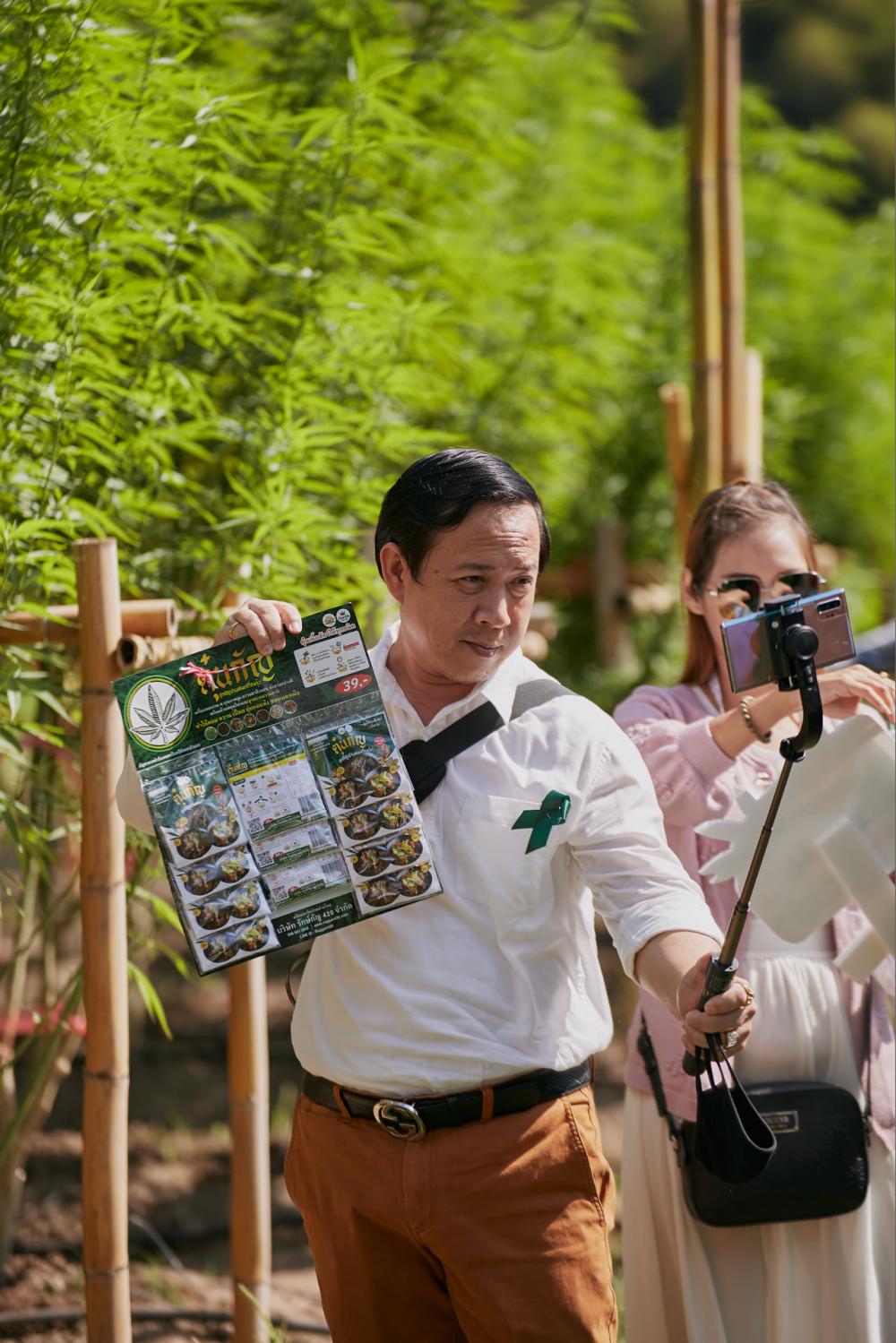 Visitors learn about cannabis at a community enterprise in Lampang.

More clarity on guidelines is needed for communication, following the lead of states in the US that legalised the plant and have clear rules in place, said Bill Barnett, managing director of C9 Hotelworks, a Phuket-based hospitality consultancy.

From an economic standpoint, cannabis is considered a great driver for tourism, tax revenue and job creation, he said.

"Thailand has been a leading innovator, based on the success of the Phuket sandbox. Cannabis has the opportunity to level the playing field with Western countries that allow its use," Mr Barnett said.

He said Thailand can even build its brand on cannabis, becoming a role model for Asian countries to modernise their policies based on clear guidelines.

Recreational cannabis zoning is considered illogical because of the high price of policing the use and zones, but mimicking the Phuket sandbox by introducing the zones as a pilot model before rolling out to other destinations may help to sort out bottlenecks, said Mr Barnett.

He said recreational cannabis needs to be allowed nationwide, with a focus on helping both the tourism industry and the government by implementing legal dispensaries and a tax policy for additional income for state coffers.

Chantana Limsuwan, president of the Koh Phangan Hotel and Tourism Association, said cannabis legalisation needs to have concrete guidelines to ensure the safety of every party, as seen in Amsterdam's cannabis coffee shops.

She said each shop has to obtain a licence from the government or related state agency to operate offering standardised services, which include designated zones for recreational use.

In addition to shops, local administrations and operators should have a joint discussion about the plan to allow recreational cannabis during Koh Phangan's Full Moon Party, said Ms Chantana.

She said the geography of the island makes it easy to control entry and Koh Phangan could serve as a sandbox model.

Practical rules such as age restrictions and well-trained staff are essential in case of an emergency, said Ms Chantana. 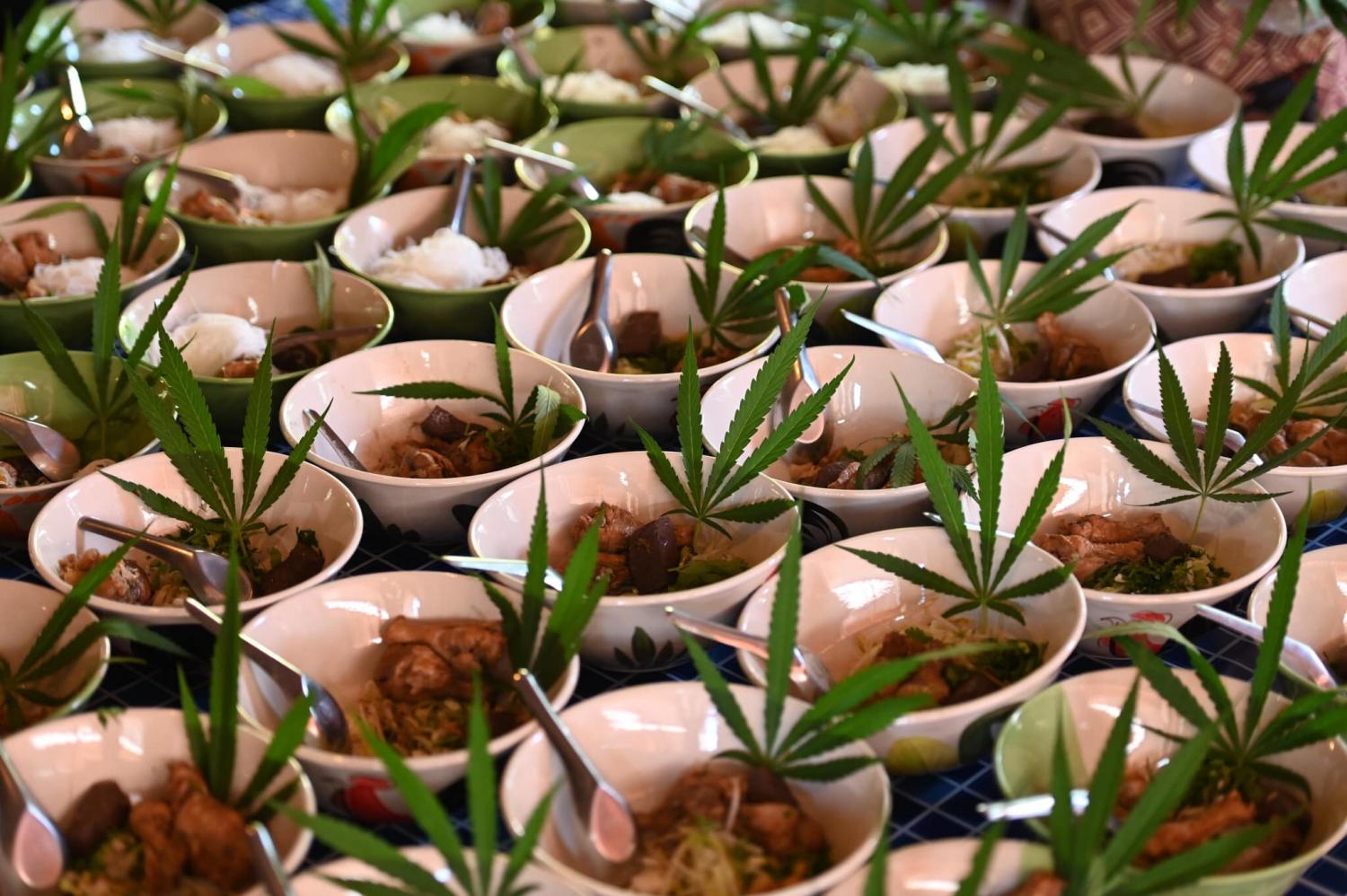 Cannabis at Pethlanna Organic Community Enterprise in Lampang, which is open to visitors who want to learn more about the plant and try cannabis-based products such as noodles.

The trio of Koh Samui, Koh Phangan and Koh Tao are renowned for a cannabis strain under KD Koh Tao named after Ko Dam, a local healer and cannabis expert. The tourism industry can use this recognition and storytelling to improve arrivals in the region, she said.

Demand could not keep pace with supply, affecting legal farms that registered and invested before the legalisation, he said.

The community enterprise is working to develop value-added products such as seasoning, soup powder and tea, but the most effective way to support the growth of the cannabis industry is to expand into recreational activities, said Mr Ong-ard.

The model of recreational cannabis, which utilises tourism to generate more revenue for farmers, will help support cannabis supply from community enterprises and farms nationwide, he said.

Discussions are ongoing with other operators to develop the sale of recreational cannabis at shops in major tourism destinations such as Pattaya, Phuket, Krabi, Koh Samui and Hua Hin, said Mr Ong-ard.

The pilot model for recreational cannabis shops has standardised operations to create a safe ecosystem and ensure that non-smokers will not be affected by secondhand smoke.

He said the shops have to be equipped with a tracking system to collect data from passports and ID cards, while limiting the amount of cannabis per customer.

"The country needs to show its vision on this effort as all eyes are on Thailand after the legalisation," Mr Ong-ard said.

"Operators have to start developing a model to promote recreational use of cannabis and prove their readiness to welcome tourists for the upcoming high season." 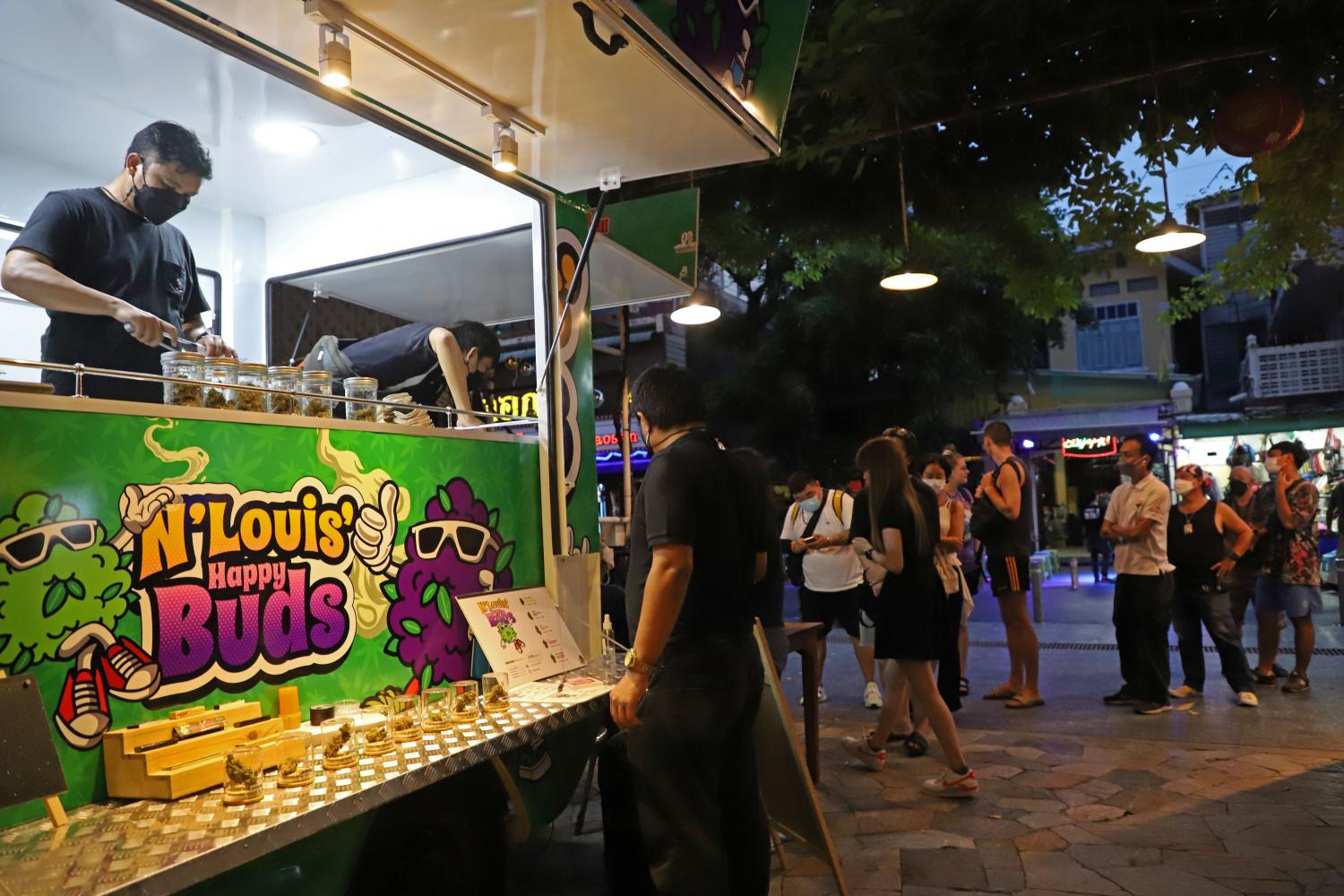 Kattikamas Thanyajaroen, executive officer of Than Global Travel, a wholesale operator that offers cannabis tour packages, said foreign travel agencies have shown interest in cannabis packages, but they have to conduct further studies on laws in home countries and clarify Thailand's laws.

Tourists from the US and Europe as well as expatriates in Pattaya and Phuket plan to inspect cannabis farms for business purposes, while some hospitals may offer medical cannabis as a treatment, she said.

However, this topic needs in-depth discussions between the public health agencies of the two countries as the plant remains illegal in China.

Indian travellers have shown interest in visiting farms and trying cannabis products approved by the Thai Food and Drug Administration, as cannabis has been used in that country for religious purposes for a long time, despite its illegal status.

She said cannabis could create tourism opportunities if a clear policy was developed to avoid any future delisting of usage of the plant.