Parliament may cool down after legislators finished their job grilling the government in the censure debate last week, but how the Prayut Chan-o-cha administration will better combat economic hardship remains a burning issue.

Whether the four-day no-confidence debate will lead to changes in the cabinet lineup or even a House dissolution, business leaders are monitoring the government's next steps following an accusation by the opposition that the ruling party was ineffective in putting Thailand on an economic recovery.

The business sector is seeking to restore the reeling tourism sector and measures to slow down soaring inflation, meaning the government may face a difficult path to recovery. 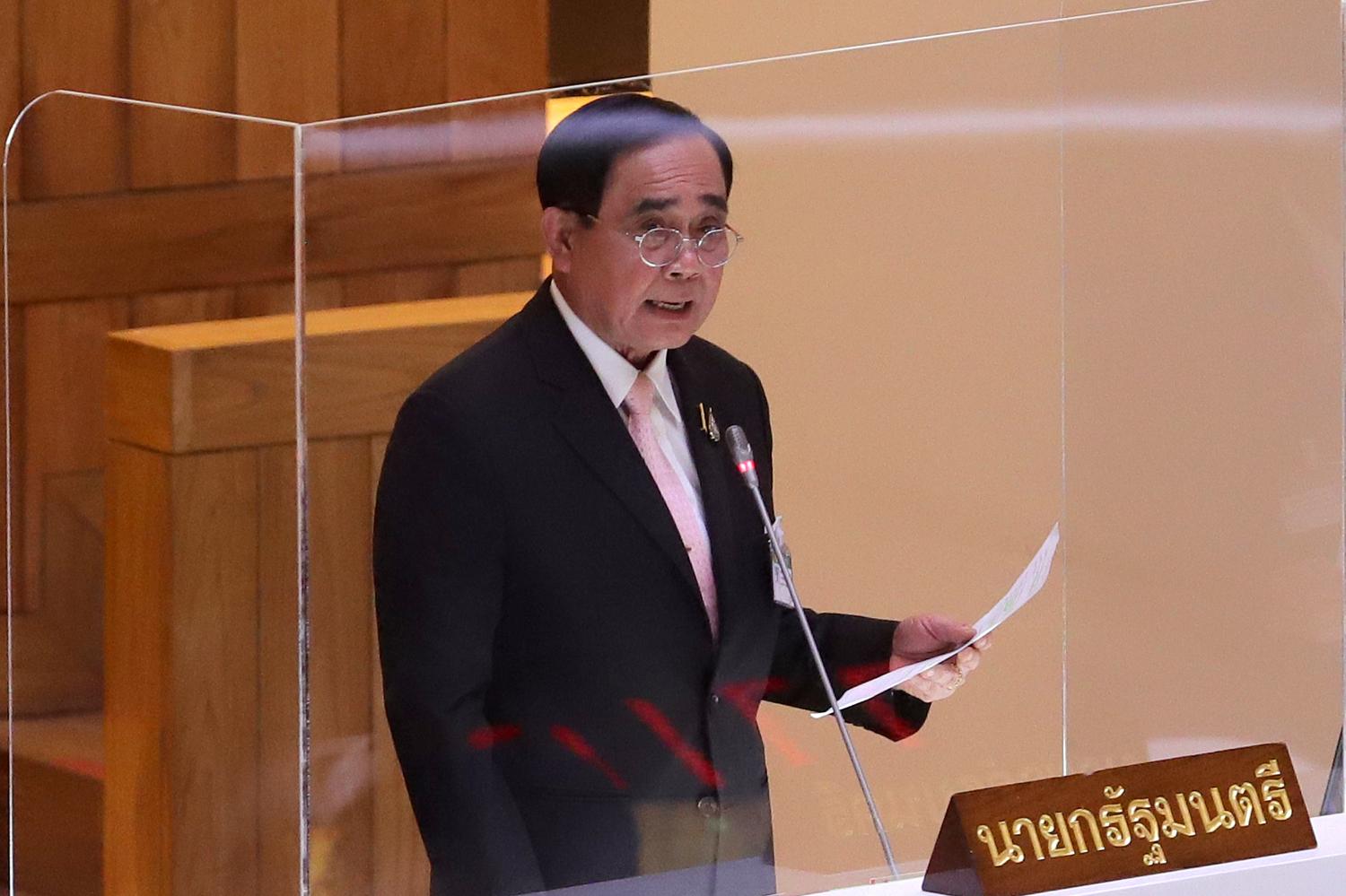 Gen Prayut responds to questions on the third day of the no-confidence debate. Chanat Katanyu

Marisa Sukosol Nunbhakdi, president of the Thai Hotels Association, said the tourism industry during under the current administration is sluggish compared to European countries which provided better support to the supply side, such as a subsidy on employment to prevent mass layoffs and sustain the stability of businesses in the long run.

However, during the recovery period starting with sandbox initiatives last year, Thailand still outperformed many Asian countries as the number of international tourists has gradually increased and could reach 10 million this year.

The most outstanding stimulus from the government was the 'We Travel Together' subsidy covering 40% of room price, which was an effective programme that helped spur demand for hotels nationwide.

"The industry moderately improved as the most beneficial scheme was created for end-users, while the supply side still lacked direct support despite the government saying that we're an important industry," said Mrs Marisa.

She said 10 million arrivals might be an impressive performance compared to less than a million last year, but the government should not forget that it's just a quarter of the normal year in 2019, which means tourism operators still have a limited market. 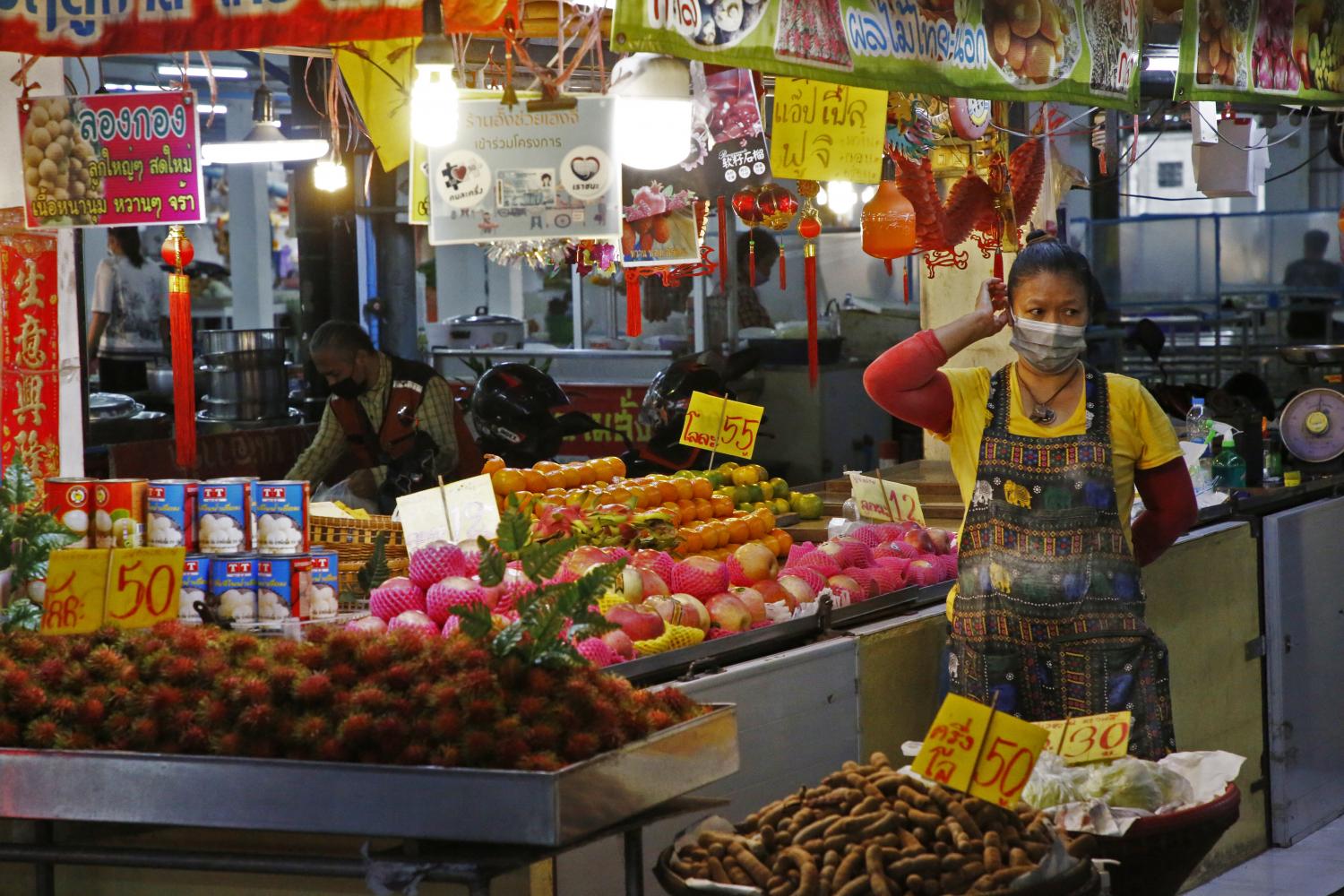 A vendor sells fruit at Bangkhae fresh market in Bangkok. Mr Kriengkrai said inflation must be eased to relieve the pressure on the prices of goods and services. ARNUN CHOLMAHATRAKOOL

Sisdivachr Cheewarattanaporn, president of the Association of Thai Travel Agents, said the stability of the government doesn't directly correlate with international tourists' confidence.

However, there should be more consistency in any policy to avoid confusion, particularly regarding the reopening policy.

"The private sector already adjusted its plans to survive during the pandemic crisis and proposed to the government every measure that will be useful to accelerate the recovery. But it depends on the government how to react," he said.

With a general election slated to take place next year, he said it might be too soon to leave any message to political parties until there's a confirmed election schedule.

The no-confidence debate, which was voted by members of parliament on Saturday, has only one implication for the Federation of Thai Industries (FTI) -- a call for changes in the government's approach to economic problems.

Thailand is struggling to deal with one of the biggest economic challenges since the country saw the domestic economy turn sluggish, following lockdown measures which were first imposed in 2020 to contain the spread of the highly contagious Covid-19 virus.

Though Thailand gradually eased lockdown measures, including reopening the country since late last year and relaxing travel restrictions to draw more foreign tourists, new economic problems have emerged due mainly to the global oil price hike, which has driven up inflation.

"Under these conditions, the cost of living is an urgent issue that needs effective solutions," said Kriengkrai Thiennukul, chairman of the FTI. 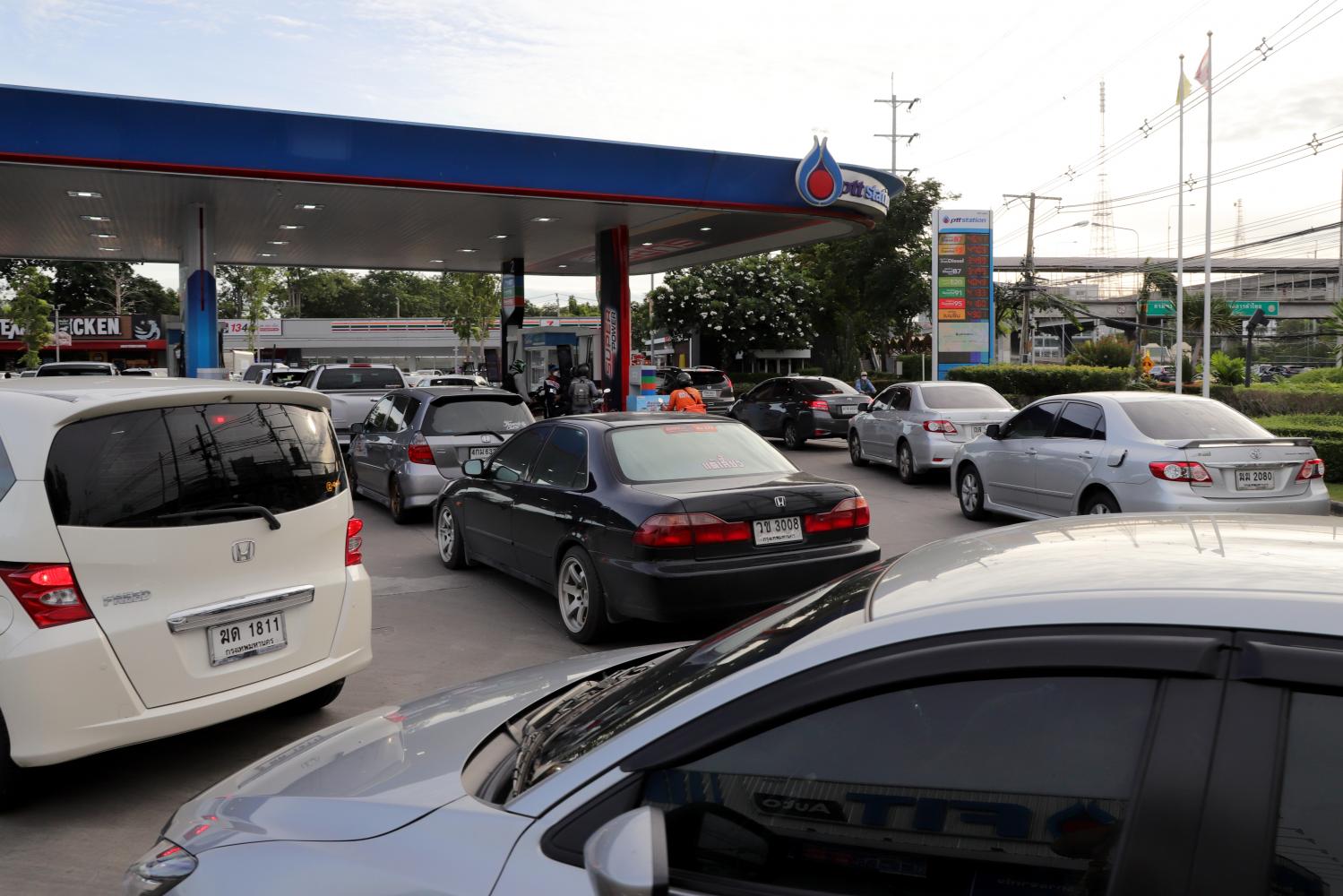 "The government needs to come up with new ideas and new actions to direct and get Thailand through the economic hardship," he said.

In his view, the government must seriously look into its past attempts to deal with economic troubles and find if it needs to tweak some solutions or create new ones regardless of whether it gained a majority of votes in favour of its performance in parliament.

Soaring inflation must be slowed down to relieve pressure on the price of goods and services, Mr Kriengkrai stressed.

"Inflation has already exceeded 7%. We may see it increase to 8%, driven by high energy prices," he said.

The latest censure debate highlighted the political conflict between the Palang Pracharath Party-led coalition government and the alliance of parties disgruntled with the government's performance. This atmosphere is not good for the state's efforts to restore and expand the economy.

"Politics is always a key factor affecting the Thai economy," said Mr Kriengkrai, adding that many entrepreneurs have expressed concern over political quarrels.

Political uncertainties ranked third on the list of concerns voted by 1,335 enterprises in 45 industry clubs under the FTI during its latest survey to calculate the Thailand Industry Sentiment Index in June.

The global oil price surge came first with 90.3% of votes, followed by the global economy (69%) and concerns over domestic politics (38.8%), according to the findings.

Energy experts suggest the Prayut administration redesign its policy to deal with energy price hikes by depending less on months-long energy subsidy programmes.

Spending a huge amount of money from the state Oil Fuel Fund to cap domestic prices of diesel for a long time as well as a push for the controversial proposal to collect a windfall tax from oil refineries to inject more money into the fast-dwindling fund may make the government an easy target of criticism, they said.

The tax will be imposed on part of the gross refinery margin (GRM). 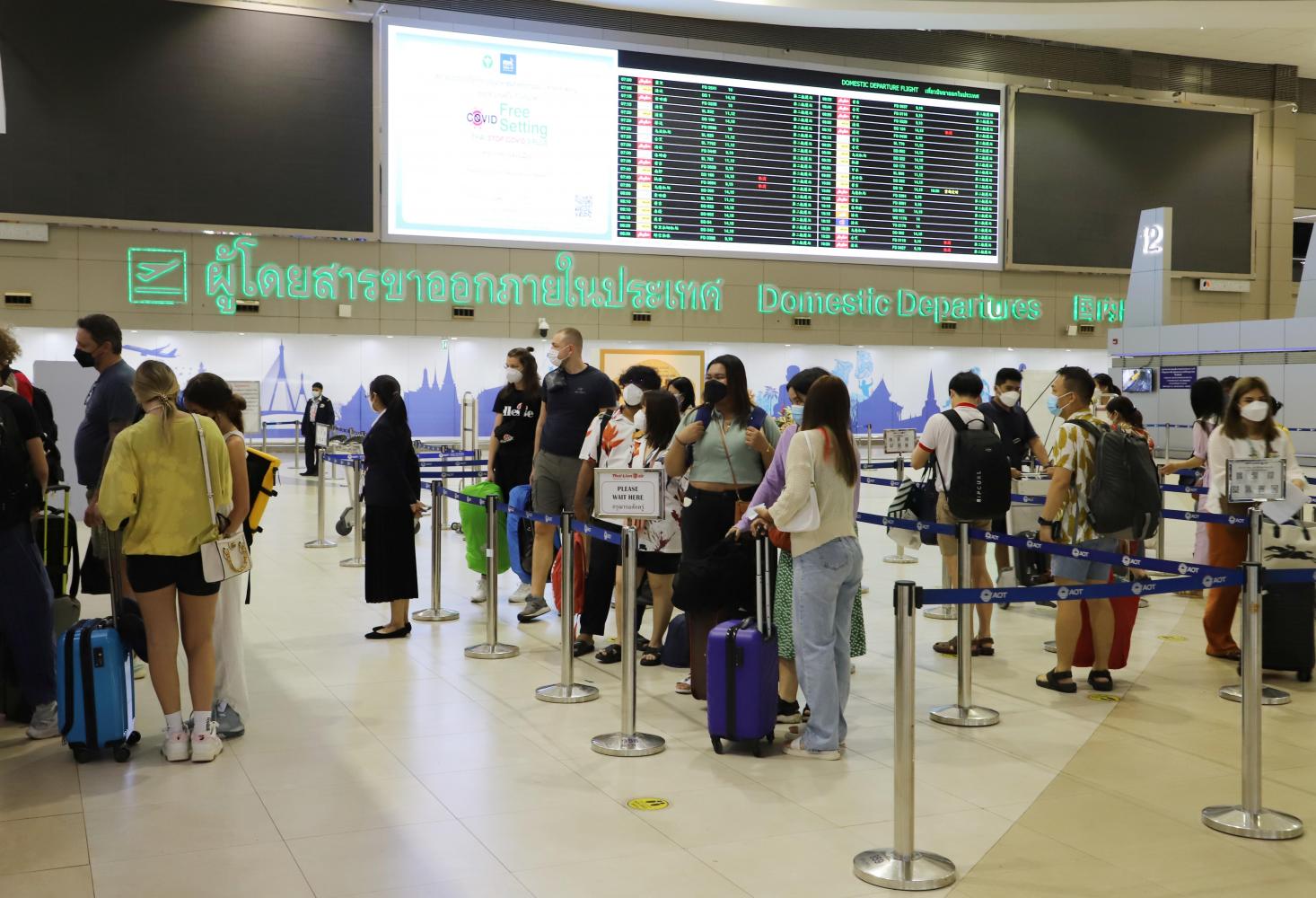 Travellers queue to check-in with carriers at Don Mueang International Airport during the Songkran holiday. The most outstanding stimulus from the Thai government was the 'We travel together' programme. Apichit Jinakul

Chen Namchaisiri, ex-chairman of the FTI, said he is aware of the importance of attempts to cap diesel prices to relieve higher costs of living, but the government should direct this help to specific groups of businesses rather than carry out a blanket subsidy.

In his view, the blanket subsidy not only drains the state budget but also affects campaigns for efficient energy consumption.

Households and businesses need to learn how to adjust their energy usage at a time of surging global oil prices.

Even when oil prices fall, efforts to encourage households and businesses to make wise use of energy must continue, said Kurujit Nakornthap, ex-permanent secretary for energy and executive director of the Petroleum Institute of Thailand.

Campaigns such as asking drivers not to have their cars loaded with heavy items and not to drive too fast can save fuel, he said.

Mr Kurujit also disagrees with the blanket subsidy as, if implemented for a long time, it will increase worries over the distortion of oil prices.

He recalled a similar incident when the government put a cap on oil prices in 1979, following a drop in oil supply from the Middle East. This made oil traders decide not to import refined oil to Thailand because the trade did not benefit them.

The GRM issue also needs to be carefully considered. If the government goes ahead with the tax measure, it may eventually cause some impact on foreign investment in the energy sector, experts said.

GRM, the difference between the price of crude oil and refined oil, refers to costs added to the crude oil price during the refining process. GRM eventually becomes part of the retail oil price that drivers pay at petrol stations.

If one country decides to manipulate GRM, which is determined by supply and demand in the crude and refined oil markets, at a different rate than other countries, it will risk distorting the free market, Wirat Uanarumit, president and chief executive of Thai Oil Plc, said earlier.

Sanan Angubolkul, chairman of the Thai Chamber of Commerce (TCC), said the censure debate is unlikely to affect the country's political stability although some embattled ministers might win few votes.

"The government still has options to reshuffle the cabinet, but that is unlikely to impact the country's political stability, as the practices are considered normal in a democratic regime," said Mr Sanan. "As long as the coalition parties still support each other, the coalition government can work together with little impact on political stability."

According to Mr Sanan, even if the prime minister lost the censure debate, leading the premier to dissolve the House and call for a new election, the government can still work as an interim government to continue stimulating and rehabilitating the economy.

He added that during the interim administration, investors may slow down their investments and wait and see the policies of the new government after the election.

Mr Sanan remains upbeat that the economy is likely to recover by the end of the third quarter of this year, with GDP growth estimated at at least 3% boosted by growing exports and recovering tourism that benefits from the country's reopening as well as the baht's weakness.

Somchai Lertsutiwong, chief executive of Advanced Info Service (AIS), the country's biggest mobile operator by subscriber base, said the censure debate last week against the prime minister and 10 other ministers was unlikely to unsettle the government's status.

The grilling in the parliament was not meant to deliver solutions to the country's pressing problems now, he said.

The current economic situation involves various factual factors, such as rising inflation around the globe, surging fuel prices, the baht's depreciation and rising household debt, rather than issues raised during the censure debate.

The weaker baht could benefit some sectors, such as tourism and exports, but take a toll on the telecom sector as imported equipment is purchased in dollars. However, service fees are collected in baht, Mr Somchai said.

The no-confidence debate is a stage where the politicians provide information to the public but is unlikely to pressure the government into taking any action in response to what was mentioned during the event, he said.

The administration should pay heed to all the factual factors involved with the crisis and handle them in a timely and effective manner, Mr Somchai said, adding the government should seek cooperation from the private sector and the public to find ways to address the problem as the country is reopening.