Taking a deep dive into the baht rebound
Business

Taking a deep dive into the baht rebound

The currency of Southeast Asia's second-largest economy traded against the greenback at 36.08 on Monday, appreciating 1.4% compared to a week prior.

The Bangkok Post takes a deep dive into what caused the rebound and the implications for the economy.

Q: What forces are driving the rebound?

Since the beginning of this year, the baht has weakened by 10.3% against the US dollar. It is worth noting where this trend started before addressing the rebound.

For the past several months, the currencies have been mainly under the influence of the broader US dollar trend, triggered by the invasion of Ukraine that resulted in a supply shock via blockades, the destruction of farms and factories and a slew of sanctions and counter-sanctions.

Kobsidthi Silpachai, head of Capital Markets Research at Kasikornbank (KBank), explained that the supply shock added to the inflationary pressure and eventually prompted the US central bank to tighten monetary policy and reduce the US dollar supply. As a result, the US dollar rose relative to other currencies, including the baht. 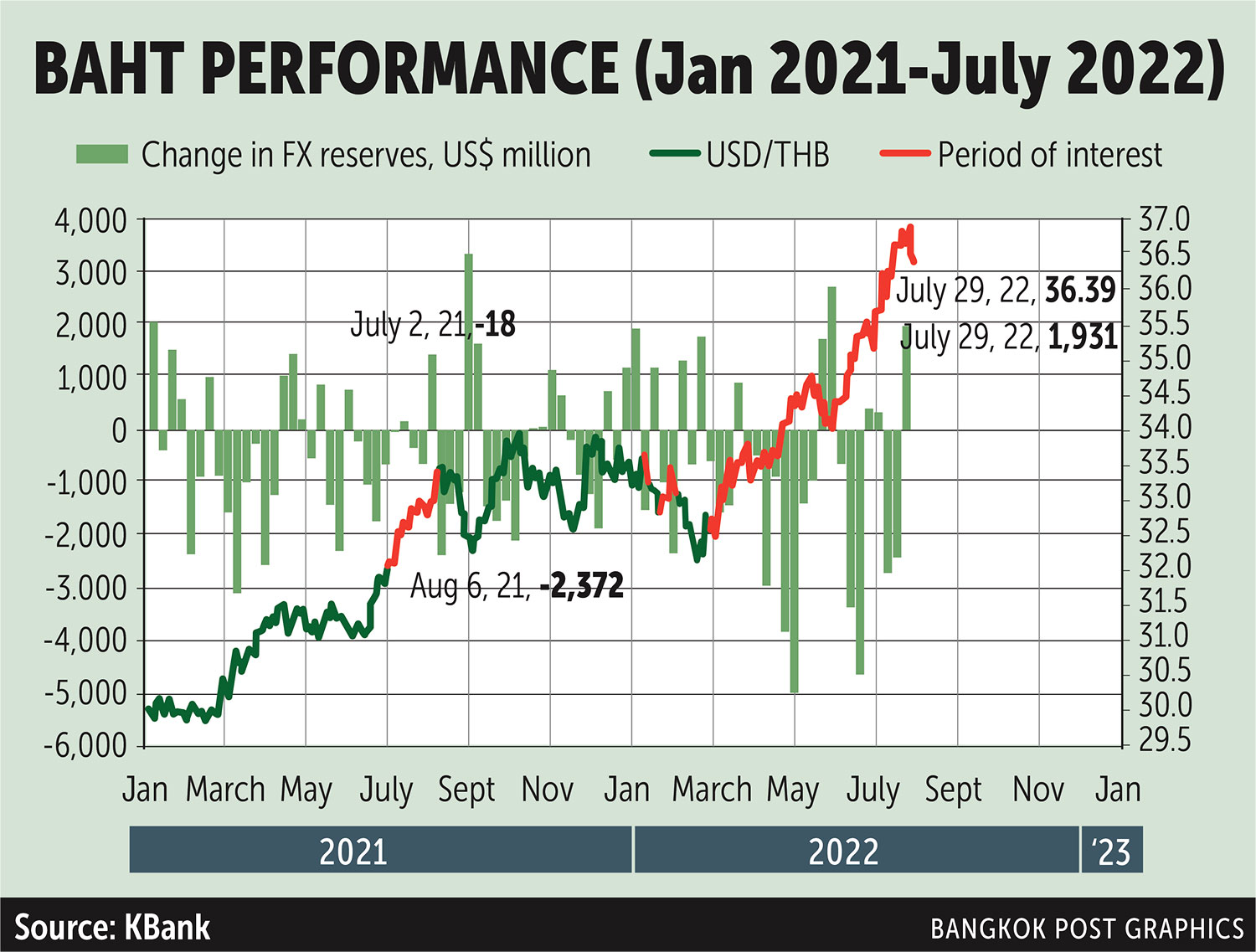 So far, the US Federal Reserve (Fed) has hiked interest rates three times this year. The benchmark rate now sits between 2.25% and 2.50%.

"Since World War II, 11 of the 14 Fed's tightening cycles have ended in a recession, which are odds of 78%. This prompted the markets to have a change of heart," Mr Kobsidthi said, adding that the expectations of the Fed Funds path by the futures market later decreased.

"This was confirmed by the release of the US GDP data in the second quarter of this year, which contracted 0.9%, the second consecutive quarter. It is a technical recession."

Wei-Liang Chang, a foreign exchange and credit strategist at DBS in Singapore, commented on the effects of the Fed rate hike on the baht.

"The baht has rebounded against the US dollar, which is weakening as the market is pricing in smaller Fed rate hikes due to softening US growth. Another factor is stronger economic momentum from the reopening to international travel, which may help support the baht," Mr Chang said.

Q: What has the central bank done so far?

Bank of Thailand governor Sethaput Suthiwartnarueput recently said there is no need for a special meeting to rein in the currency like other countries in the region, such as Singapore and the Philippines.

Q: Is having a low baht part of the central bank's strategy to shore up tourism and exports?

Tourism and exports have long been the two main drivers of the economy. The Tourism Authority of Thailand Intelligence Center reports that as of July 31 foreign arrivals stood at 3,334,326.

The top markets are Malaysia, India, Singapore, the UK and the US. Overall, the government expects about 10 million international visitors in 2022.

Meanwhile, exports increased 12.7% in the first half of 2022 compared to a year earlier. One outstanding performing category is food and agricultural products, which expanded 20.4% in the second quarter of this year compared to the year prior.

The top products being shipped out are potatoes, rice, brown sugar and pet foods. KrungThai Compass attributes the stellar growth to the weak baht and high global food demand due to the Russia-Ukraine war.

Mr Kobsidthi said having a low baht is not part of the central bank's plan to reinvigorate key sectors.

"The Bank of Thailand's stance on forex is usually focused on stability, rather than directionally. It does this by buying and selling USD/THB with its forex reserves. We can track this by calculating the changes in the weekly forex reserves position.

If the central bank is trying to weaken the baht, the changes in forex reserves should be positive on a consistent basis, rather than alternating [as is currently happening]," he said.

Mr Kobsidthi added that he has not found empirical evidence that a weaker currency improves export competitiveness on a long-term basis -- a growing market share of global exports.

"Thai exports have been benefiting from the global recovery from Covid-19. However, as the Ukraine war continues, global trade and globalisation will face growing headwinds. We expect exports to grow 7.8% in 2022 versus last year's growth of 18.8%," he said.

Thailand has a massive foreign currency reserve that amounted to $201.4 billion as of June 2022.

Amonthep Chawla, head of research at CIMB Thai Bank, said the recent short-term baht volatility might not be relevant to the forex reserve. It will only be if the Bank of Thailand enforces intervention to allow the baht to move in line with its peers.

He cautioned that Thailand should think of ways to use its foreign reserve more efficiently.

"Forex reserves can be viewed as having insurance. You will never know if we could be hit somewhere. Say that an emerging market crisis right now [comes] from high external debt, huge current account balance deficit and weakening currency. Thailand may someday end up with high volatility with different symptoms such as high inflation, high household debt and financial instability. It's good to have a forex reserve to cushion volatility and build confidence. But too much forex reserve could be a dilemma. We are too scared to take risks, leading to low growth," he warned.

Q: What is the baht outlook compared to other emerging market currencies?

Mr Chang of DBS in Singapore said the baht still looks overvalued based on his long-term fair value metric.

"The baht is the worst performing currency in Asean on a total return basis for this year. Further weakness against regional currencies may be likely, given that Thailand is still seeing trade deficits while Thai rates are also lower compared to regional peers," he said.

Poon Panichpibool, a markets strategist at Krungthai Bank (KTB), echoed a similar view on the baht's short-term outlook. He said that the baht might not appreciate significantly against emerging market peers except some that are facing a weak economic outlook like China. However, he thinks that the baht could gain more strength in the fourth quarter of this year, given that Thailand will enter the peak tourism season.