Mr Yutthasak, centre, and Mr Puttipong at the seminar organised by the Tourism Authority of Thailand at TAT's headquarters.

Despite the ongoing resumption of more international flights to Thailand, visitors' spending is forecast to be lower than expected.

Tourism Authority of Thailand (TAT) governor Yuthasak Supasorn said recovery of the sector is gaining momentum in terms of numbers, with the country expected to see a total of 6 million international visitors by the end of September and then an extra 1.5 million tourists a month in the final quarter.

By the end of the year, overall inbound numbers might hover at around 10 million following a resumption of international flights that could reach more than 50% of pre-pandemic levels.

"Earlier, we were worried about the lack of seat capacity. Even though this obstacle still remains, there is a sign of improvement as more international airlines have confirmed their winter schedules to Thailand," said Mr Yuthasak.

However, the Ministry of Tourism and Sports recently revised down its target for revenue to 1.08 trillion baht, from 1.2 trillion baht, which was the third time it had to downgrade the forecast due to weaker purchasing power.

At the beginning of the year, the ministry set its target at 1.5 trillion baht.

Mr Yuthasak said the agency has worked with many local and international airlines to bring more long-haul flights to Thailand.

Last week, it held talks with Taiwan's EVA Air to ensure more flight connections to Bangkok via Taipei as the airline is planning to add more destinations to Europe, alongside its pre-existing Vienna route.

Tour agencies targeting the Russian market will also fly chartered flights from Russia to Thailand, starting from three flights per week this winter.

Meanwhile, the TAT has rolled out a stimulus campaign with six local airlines to stimulate domestic revenue of at least 2 billion baht, in addition to providing a 300-baht airfare booking subsidy. Privileges covering 500,000 visitors have been prepared for this scheme.

Puttipong Prasarttong-Osoth, president of Bangkok Airways and the Airlines Association of Thailand, said flights from both local and international carriers are expected to fully recover by the end of next year.

However, routes and frequencies might be different from pre-pandemic schedules as airlines have to adjust their plans to cater to changes in demand.

Mr Puttipong said there were more positive signs as Bangkok Airways itself has started to renegotiate with 26-27 codeshare-partnered airlines to resume services to Thailand after connections were paused for two years. 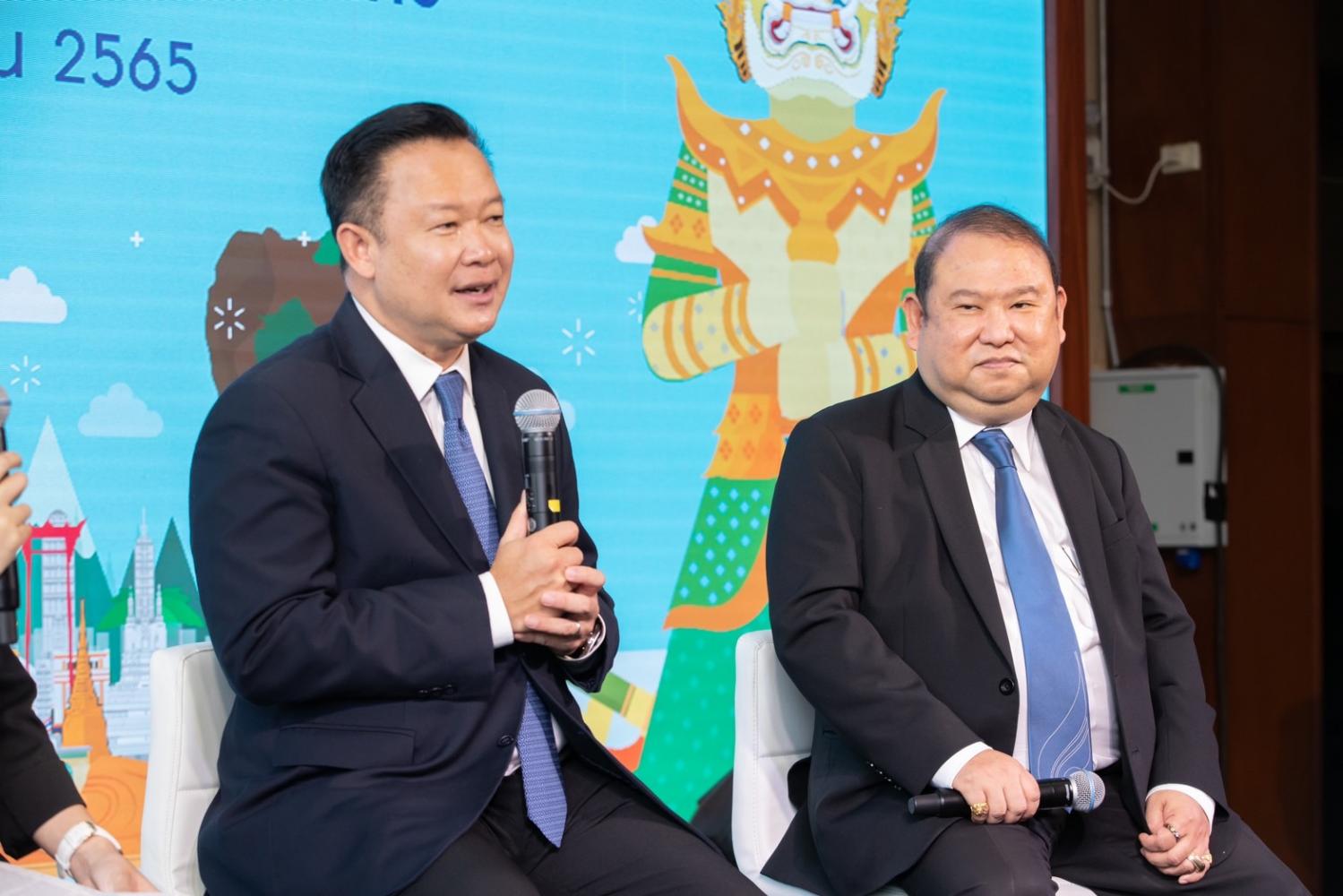 Mr Yutthasak, left, and Mr Puttipong at the seminar organised by the Tourism Authority of Thailand at TAT headquarters.

"The aviation trend has slightly changed. There are more enquiries from tourists in Asia and Europe to fly direct to tourism destinations such as Phuket," he said.

Nuntaporn Komonsittivate, head of commercial operations at Thai Lion Air, said international flights could resume more slowly than domestic routes, of which the airline has resumed all destinations covered prior to the pandemic.

The sluggish recovery is mainly attributed to various entry restrictions that remain in place in some countries, such as Japan and Taiwan.

"We have to prioritise domestic routes by adding more frequency. The outlook for the domestic market looks promising with the average load factor expected to hit 80%," Ms Nuntaporn said.