After loans have gone sour and projects have stalled, Beijing is revamping its troubled initiative

China has spent a trillion dollars to expand its influence across Asia, Africa and Latin America through its Belt and Road infrastructure program. Now, Beijing is working on an overhaul of the troubled initiative, according to people involved in policy-making.

A slowing global economy, combined with rising interest rates and higher inflation, have left countries struggling to repay their debts to China.

Tens of billions of dollars of loans have gone sour, and numerous development projects have stalled.

Many economists and investors have said the country's lending practices have contributed to debt crises in places like Sri Lanka and Zambia.

After nearly a decade of pressing Chinese banks to be generous with loans, Chinese policy makers are discussing a more conservative program, dubbed Belt and Road 2.0 in internal discussions, that would more rigorously evaluate new projects for financing, the people involved said.

They have also become open to accepting some losses on loans and renegotiating debt, something they had been previously unwilling to do.

Chinese President Xi Jinping once called the initiative "a project of the century," but the overhaul exposes limits to his vision to reshape the global order.

At a November meeting with senior officials, Mr. Xi noted that the international environment for Belt and Road was becoming "increasingly complex," and stressed the need to strengthen risk controls and expand cooperation, according to state-media reports of the meeting.

Chinese banks have already sharply reduced lending for new projects in low-income countries as they focus on cleaning up their existing loan portfolios. 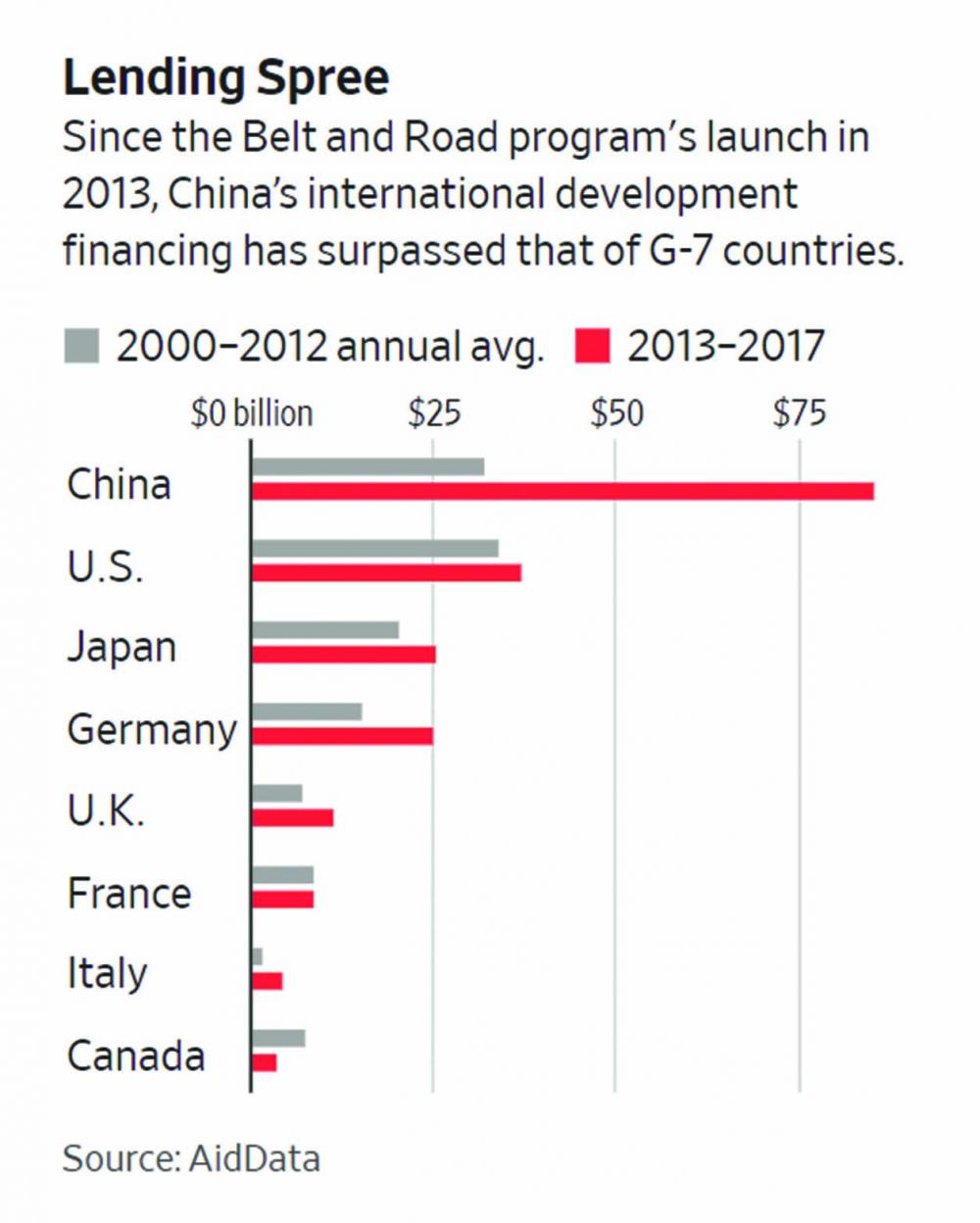 Nearly 60% of China's overseas loans are now held by countries considered to be in financial distress, compared with 5% in 2010, according to economists Sebastian Horn, Carmen Reinhart and Christoph Trebesch, who have written about international debt.

China has begun working with other creditors to resolve current debt quagmires. To do so, Beijing has had to abandon its longstanding resistance to working with international institutions like the Paris Club, an association of large sovereign creditors including the U.S., Japan and France. It's coordinating with members of the Group of 20 advanced and developing economies to negotiate debt relief in some countries.

The process could force Chinese banks to accept losses, something they've long opposed. For years, Beijing preferred to extend the maturity of troubled loans, a practice known in the finance industry as "extend and pretend."

That strategy risks prolonging countries' debt woes rather than fixing them.

Beijing has also dialed down its rhetoric in state media. While it used to tout the economic benefits of Chinese lending for recipient countries, it now emphasizes managing risks and improving international cooperation, said Weifeng Zhong, a senior research fellow who tracks Chinese government propaganda at the free-market think tank Mercatus Center at George Mason University.

The State Council, which serves as China's cabinet, as well as the country's top economic planning agency and the Ministry of Finance, didn't respond to requests for comment, nor did China's central bank or several banks involved in China's lending effort.

In a written statement, China's Foreign Ministry said that "we will work with the international community to promote high-quality development of Belt and Road cooperation."

The program's roots date back a little over a decade, when China saw an opportunity for its state-owned financial institutions to extend their reach and earn better returns on their cash holdings through investments overseas.

Authorities encouraged lenders to finance projects like mines and railways to enable developing countries with natural resources to better supply China's market, and to create jobs for Chinese contractors.

After taking power in 2012, Mr. Xi expanded those efforts and promoted the initiative as part of his plan to expand China's influence and build markets for Chinese goods.

In 2015, when a stock-market collapse in China damped domestic demand, Beijing used the initiative to export products in oversupply at home, like steel and textiles. The Export-Import Bank of China and China Development Bank often required countries that benefited from their financing to source from Chinese suppliers.

In just a decade, according to the Foreign Ministry, China handed out about $1 trillion in loans and other funds for development projects in almost 150 countries, such as Ecuador and Angola.

The U.S. government and government-owned institutions now provide less than half of what China does in grants and loans to less wealthy nations, according to AidData, a research lab at the university William & Mary in Williamsburg, Virginia.

Both countries were roughly on par in the decade before 2013.

While the U.S. finances nearly all its overseas development projects with aid, China acts more like a banker, said Bradley Parks, executive director of AidData and co-author of Banking on Beijing.

The lending fueled objections in Washington and elsewhere that China was overloading countries with costly debt, a charge Beijing regularly denied.

By 2017, Chinese banking executives were complaining to Beijing that they were being asked to finance projects that had little prospect of returns, according to executives involved in the discussions.

Some lenders threatened to stop supporting certain projects unless regulators let them clarify that those loans were "policy-instructed," the executives said, so the banks wouldn't be held accountable for defaults.

Prodded by Beijing's enthusiasm, Chinese banks had given loans to countries with limited capacity to repay them.

In Sri Lanka, a port project backed by Chinese money failed to generate enough traffic to service the debt. Pakistan fell behind on payments for electricity from new Chinese power projects, which led to a power crunch.

Many borrowing countries also built up debt from private market creditors, who had similarly ramped up lending to the developing world.

Pakistan received around $23 billion in fresh loans from Chinese sources between 2017 and last year, according to AidData -- financing that was intended to shore up the country's foreign-exchange reserves and credit ratings so its debt-servicing costs didn't rise.

Pakistan eventually had to seek a bailout from the International Monetary Fund anyway.

In November 2020, with the effects of the pandemic adding more pressure on borrowers, Beijing agreed to sign up to the Common Framework, an international debt-relief effort endorsed by the G-20 that helps coordinate debt negotiations among creditors.

The Common Framework is built on principles like those used by the Paris Club, an informal grouping of large creditor nations that looks for solutions when countries have trouble paying off debt.

Despite repeated invitations to join the Paris Club, China has resisted.

Chinese banks had often insisted that borrowers promise to exclude Chinese loans from Paris Club-style restructurings with other creditors, a tactic that could potentially help ensure China would be paid first in any default.

It took six weeks of night-and-day negotiations in the summer of 2020 among the G-20, the Paris Club and China to get Beijing to reach a technical agreement to join the Common Framework, according to people with knowledge of the talks. It took a few more weeks for Mr. Xi to sign off.

What got China on board was the belief that Chinese lenders would be better off defending their interests if they were coordinating with other creditors, said the people. For some in Beijing, the Common Framework provided a face-saving way out of its longtime resistance to joining the Paris Club.

China's Finance Ministry, which owns stakes in major Chinese lenders like China Development Bank, has remained wary of letting banks take losses on their loans, people involved in the deliberations said, especially at a time when banks are under scrutiny because of China's deep real-estate downturn.

The central bank has argued China needs to be more flexible in debt-restructuring talks to help fend off an emerging-market financial crisis, according to the people.

Some officials at the People's Bank of China have pointed to the Federal Reserve's rapid-fire rate increases as a reason for China to act. U.S. rate increases are causing the value of the dollar to rise and making it costlier for developing countries to service foreign debts.

China is moving ahead with negotiations involving creditors in Chad, Ethiopia and Zambia, which some Chinese officials see as a test case for the new approach.

Chinese creditors initially refused to participate in talks to restructure Zambia's debts after it defaulted in late 2020 on $3 billion of international bonds. That changed a few months ago, when China became a co-chair of Zambia's creditors committee with France.

The committee swiftly reached an agreement this summer to unlock $1.4 billion in emergency IMF funding. Now, negotiations are under way to secure a deal to restructure $17 billion in Zambian external debt, a third of which is owed to 18 Chinese lenders.

A full retreat on Belt and Road is unlikely.

Mr. Xi, who is seeking to extend his rule for a third term at a Communist Party conclave next month, continues to believe it has an important role to play in promoting China's role on the world stage, according to the people involved in policy-making and readouts of recent speeches he has made.

For all its troubles, the initiative has succeeded in drawing more countries into Beijing's orbit over the past decade, with many recipient countries voting alongside China at the United Nations. More prudent lending by Beijing could make Chinese financing less appealing to some countries, making it tougher to win over governments.

"If Belt and Road is going to retain its importance in expanding Chinese influence, China may need to find a new way, such as moving away from lending in favor of giving grants and other aid,'' said Brad Setser, a senior fellow and sovereign-debt expert at the think tank Council on Foreign Relations.

Chinese officials are exploring other ways to make Belt and Road more sustainable, such as forming public-private partnerships to reduce risks, and shifting toward more lending with below-market interest rates, people familiar with the discussions say.

Beijing is also signaling it's more open to working with multilateral institutions like the African Development Bank in financing new projects, the people said.

Gabriele Steinhauser contributed to this article.