Elon Musk has showed off a new humanoid, part of the Tesla Inc. chief executive's effort to shape public perception of the company as more than an electric-vehicle maker.

Mr. Musk first laid out the vision for the robot, called Optimus, a little more than a year ago at Tesla's first-ever AI day.

At the time, a dancer in a costume appeared onstage. This time, Mr. Musk presented a prototype at an artificial-intelligence event that unfolded late Friday in Palo Alto, California.

The early prototype, which still had wires showing, took a few steps, waved to the crowd, and performed some basic dance moves.

Mr. Musk quipped the robot could do a lot more, but limited its activity for fear it could fall on its face. The robot's appearance on stage marked the first time it operated without a tether, he said.

"Our goal is to make a useful humanoid robot as quickly as possible," Mr. Musk said, with the aspiration of being able to make them at high volume and low cost.

Customers should be able to receive the robot, once ordered, in three to five years, Mr. Musk said. It isn't yet for sale.

He later showed off a non-functioning, sleeker model that he said was closer to the production version.

"There's still a lot of work to be done to refine Optimus," Mr. Musk said, saying that the concept could evolve over time. "It won't be boring."

The battery-powered robot should be able to handle difficult chores, Tesla said, including lifting a half-ton, nine-foot concert grand piano.

Mr. Musk added that it would have conversational capabilities and feature safeguards to prevent wrongdoing by the machine.

"I'm a big believer in AI safety," said Mr. Musk, who has previously expressed concerns about how such technology could be used.

He said he thinks there should be a regulatory authority at the government level.

The Tesla boss painted a vision of Optimus as helping Tesla make cars more efficiently, starting with simple tasks and then expanded uses. He has also suggested the robot could serve broader functions and potentially alleviate labor shortages.

"It will, I think, turn the whole notion of what's an economy on its head, at the point at which you have no shortage of labor," Mr. Musk said Aug. 4 at Tesla's annual shareholder meeting.

On Friday, he added: "It really is a fundamental transformation of civilization as we know it."

When Mr. Musk first unveiled the Optimus concept, he said such a robot could have such an impact on the labor market it could make it necessary to provide a universal basic income, or a stipend to people without strings attached.

Early efforts to rely heavily on automated tools to scale up vehicle production suffered setbacks, and the company had to rely more heavily than planned on factory workers.

Mr. Musk later tweeted: "Yes, excessive automation at Tesla was a mistake. To be precise, my mistake. Humans are underrated."

"One of the big questions around Tesla's humanoid robot is its central purpose,'' said Chris Atkeson, a Carnegie Mellon University robotics professor.

"If Tesla's main goal is to improve manufacturing, a quadruped likely would have been easier to build than a humanoid robot, in part because additional legs make it easier to balance,'' he said.

Mr. Musk, who has been instrumental in popularizing electric vehicles and pioneered landing rocket boosters with his company SpaceX, also has a record of making bold predictions that don't immediately pan out.

Three years ago at an event about automation, he projected that more than a million Tesla vehicles would be able to operate without a driver by the middle of 2020, positioning the company to launch a robot taxi service. That hasn't happened.

Mr. Musk for some time has said Tesla aimed to be more than just a car company and reiterated that message on Friday.

He called the company "a series of startups."

Mr. Musk billed the latest event, like last year's, as one aimed at recruiting engineers in fields such as artificial intelligence, robotics and chips.

Tesla has long bet on automation to keep the company ahead of competitors.

The company's cars are outfitted with an advanced driver-assistance system, known as Autopilot, that helps drivers with tasks such as maintaining a safe distance from other vehicles on the road and staying centered in a lane. 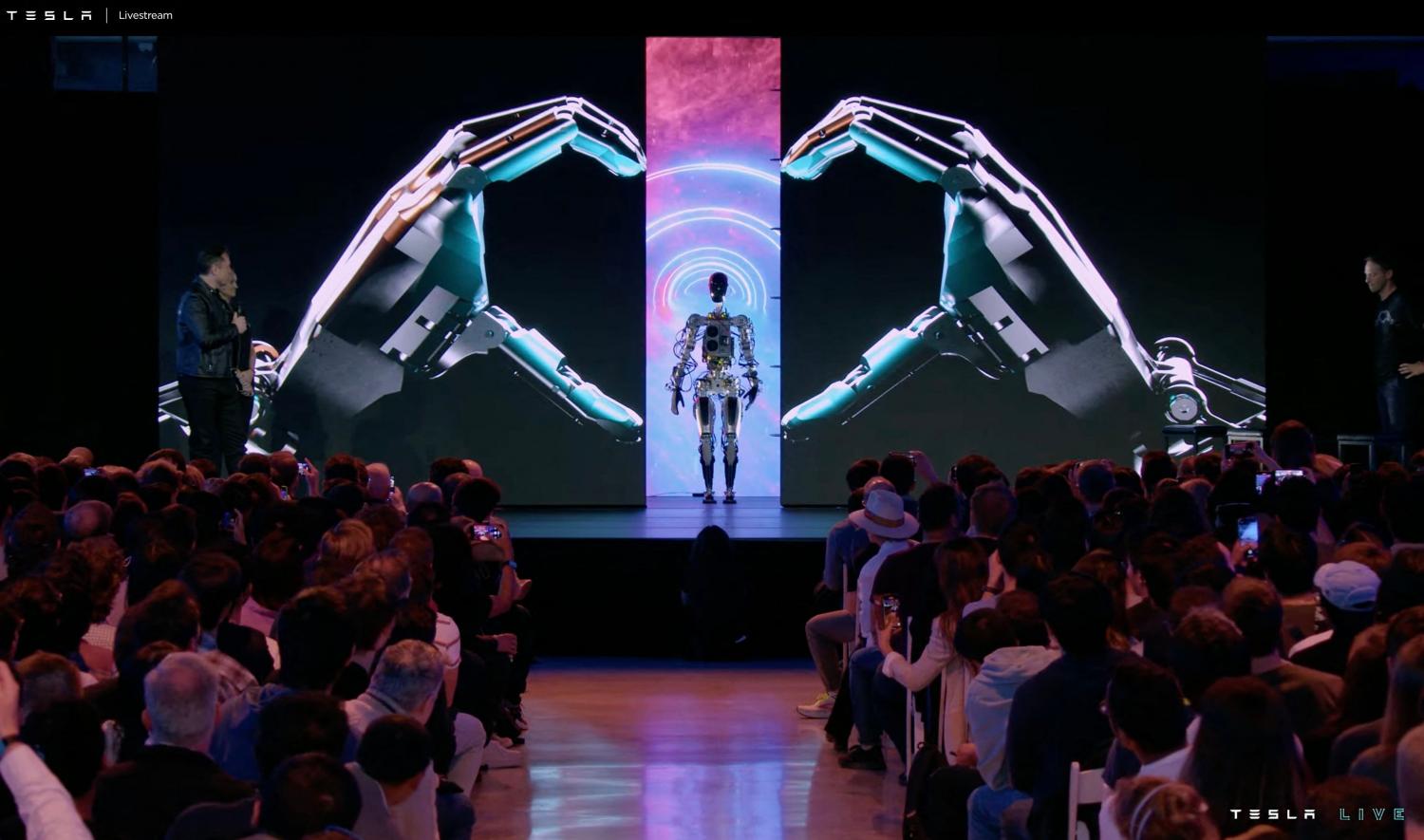 Tesla engineers detailed some of the AI work the company is doing, including to underpin its driver-assistance technology.

Mr. Musk said the company's development of a powerful, AI-focused computer could allow Tesla to offer the number-crunching capability as a service to others, not unlike cloud-computing offerings provided by the likes of Amazon.com Inc.

The company is developing and selling an enhanced version of Autopilot that brings more automated driving into cities.

Tesla calls the system Full Self-Driving, or FSD, although it doesn't actually make vehicles autonomous and the company tells drivers to keep their hands on the wheel while operating the car.

Tesla said on Friday that it now has 160,000 customers with the software.

Mr. Musk said rollout of the technology beyond the U.S. and Canada depends on gaining regulatory approval, though it should be feasible from a technology perspective by year-end.

Tesla has steadily raised the price of FSD, which now retails for $15,000.

AI has been at the heart of Tesla's efforts to develop more advanced driver-assistance features and, eventually, fully autonomous vehicles.

Tesla said the software that is used to take on more driving functions also underpins operations of the humanoid robot.

Tesla's pursuit of automation has increasingly come under scrutiny.

Two U.S. senators have also asked the Federal Trade Commission to investigate whether Tesla has been deceptive in its marketing of Autopilot and FSD.

The electric-car maker has long said that driving with Autopilot engaged is safer than doing so without it.

Tesla points to internal data showing that crashes were less common when drivers were using Autopilot, though some researchers have criticized the company's methodology.