Inflation in Thailand is showing clear signs of deceleration after the rate of price increases declined by more than one percentage point last month.

Poonpong Naiyanapakorn, deputy permanent secretary of commerce, said the main contributions to the declining rate were a decrease in energy prices and a price growth deceleration for housing and seasonings, as well as a high base in September 2021.

"The high cost of production, flooding, and growing demand for goods and services were significant factors that kept inflation expanding, but at a lower rate," said Mr Poonpong.

While fuel prices are still high compared with 2021, prices have been dropping for months. Prices for non-food and beverage items rose by 4.10% year-on-year in September, and prices of liquefied petroleum gas, personal care items, public transport, education, and tobacco and alcoholic beverages were higher than last year.

Flooding damage to agricultural areas coupled with a recovery in domestic demand caused prices of food and non-alcoholic beverages to rise by 9.82%. However, prices of several items dropped, such as glutinous rice, shredded coconut, tamarind juice, bananas and delivered food. 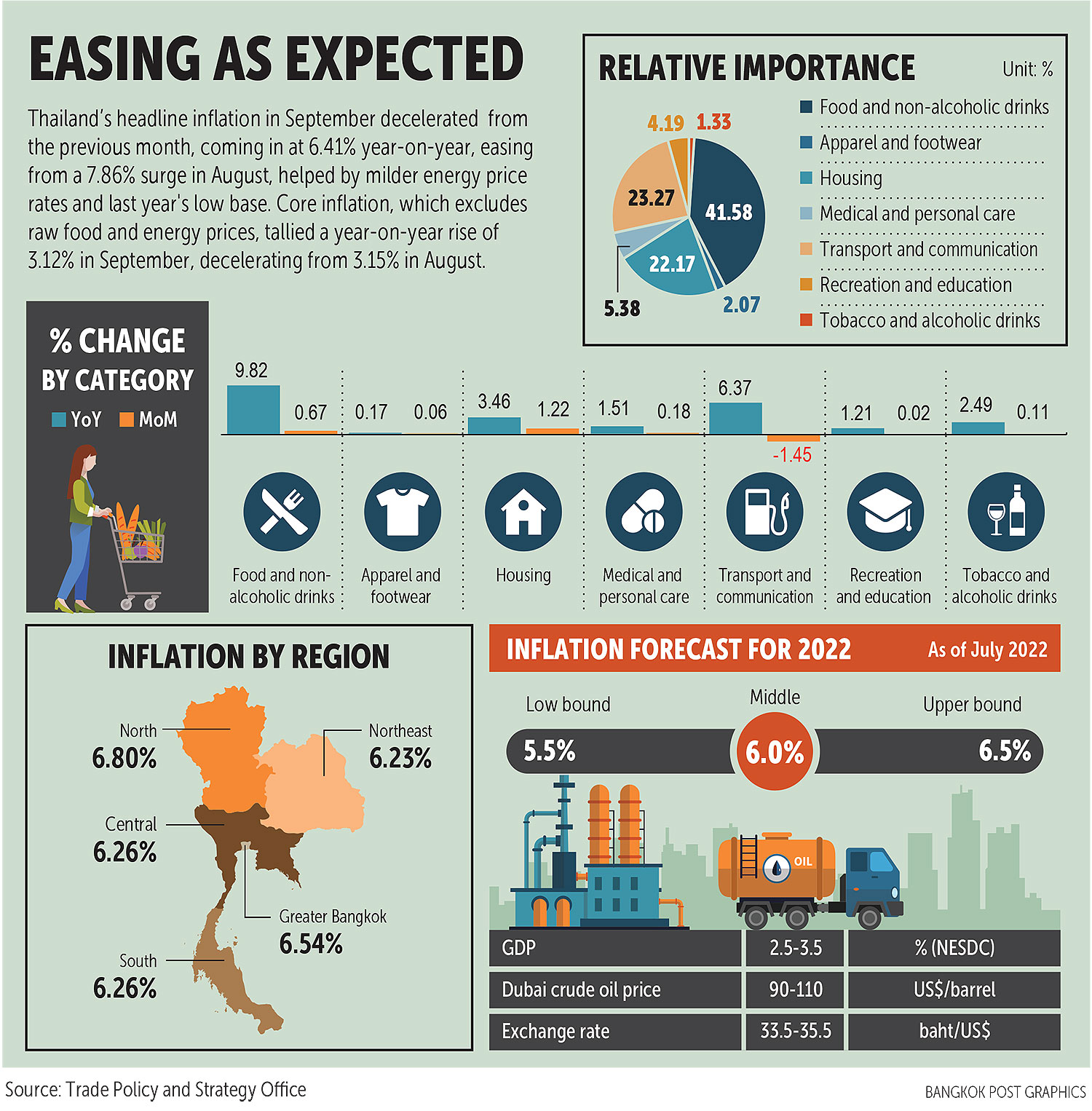 Core inflation, which excludes raw food and energy prices, posted a year-on-year rise of 3.12% in September, compared with 3.15% in August and 2.99% in July.

On a month-on-month basis, the CPI rose by 0.22%, attributed to higher prices of prepared food, non-alcoholic beverages and fresh food.

For a nine-month average, headline inflation rose by 6.17% year-on-year, with core inflation increasing by 2.26%.

Mr Poonpong said inflation in the final quarter of 2022 is expected to decelerate from the previous quarter because of falling prices of crude oil and food products, combined with a high base in the fourth quarter of last year.

In addition, the government is expected to implement further measures to assist the public with rising costs of living.

However, promising demand for tourism and exports, the effects of recent floods on prices, and fears about baht depreciation are adverse factors that could limit the easing of inflation.

Headline inflation for the full year is projected to range between 5.5-6.5%, in line with the current economic situation and projections released by other government agencies.