The Bank of Thailand yesterday raised its policy interest rate by 0.25 percentage points for a fourth consecutive time in an attempt to contain high inflation.

"Under a gradual policy normalisation, rate hikes could take place for a while if appropriate for the Thai economic environment. The committee will also consider a terminal rate in future meetings," Mr Piti said.

In August 2022, the MPC voted 6-1 to raise the rate for the first time in nearly four years, by 0.25 percentage points to 0.75%, to tackle persistently high inflation.

Since then, the committee has raised the rate by 0.25 percentage points at each of its following three meetings: in September, November, and yesterday.

The MPC said it deems a gradual policy normalisation as an appropriate course for monetary policy, consistent with the growth and inflation outlook. 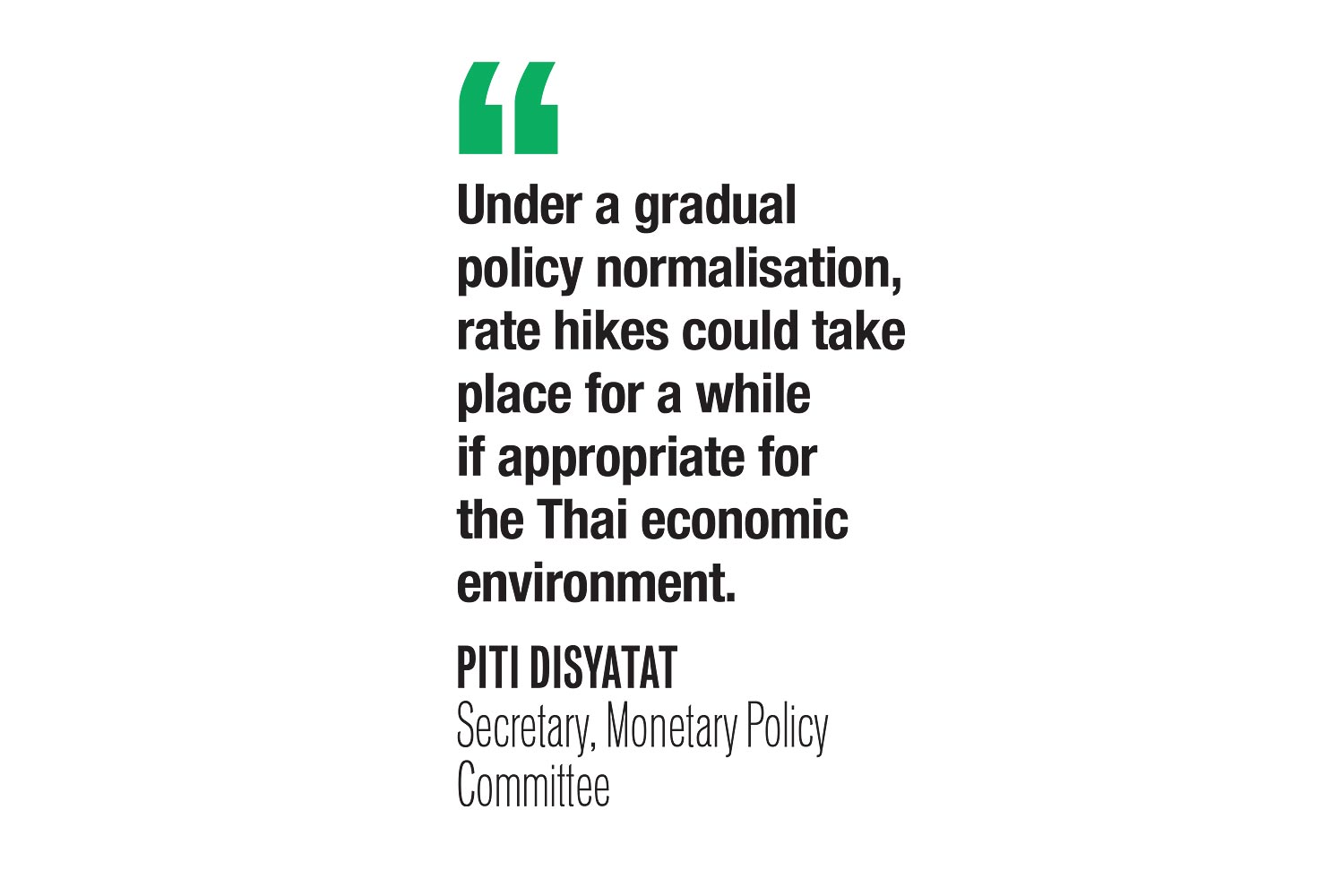 The Thai economy is projected to continue growing, with the tourism sector exhibiting a faster recovery following the return of Chinese visitors. This will contribute to a more broad-based improvement in the employment and income of self-employed workers and those in the services sector, which account for a significant share of the labour market, said the MPC.

Such improvements will support the continued growth of private consumption, said the committee.

The expansion of merchandise exports is expected to moderate this year, then resume in 2024 in tandem with global growth, which is projected to bottom out in 2023, said the MPC.

The committee believes the downside risks to the global economy have receded as both advanced economies and China have an improving outlook.

The central bank increased its projection for foreign arrivals this year to 25.5 million, up from 22 million, with the estimate for 2024 bumped up to 34 million, from 31.5 million.

The committee views headline inflation as likely to decline. Supply-side inflationary pressures will continue to dissipate along with a fall in global energy and commodity prices.

Core inflation is expected to remain at a high level for some time before gradually decreasing, according to the MPC.

Meanwhile, medium-term inflation expectations remain anchored within the target range. However, there is a risk that core inflation will remain high for longer than expected because of a potential increase in pass-through given elevated costs, said the MPC.

Moreover, the tourism recovery could increase demand-side inflationary pressures, which the committee plans to continue monitoring.

The Commerce Ministry recently reported headline inflation was 6.08% in 2022 on a year-on-year basis, mainly driven by rising energy prices.

According to the MPC, the baht has appreciated against the US dollar because of expectations of a less aggressive monetary tightening by the US Federal Reserve, as well as China's relaxation of international travel restrictions, which would benefit the Thai tourism sector.

The committee said it would continue to monitor developments in the financial markets and foreign exchange volatility.

On a year-to-date basis, the baht is 4-5% stronger against the dollar and 2% firmer compared with other currencies.

The US economy is now projected to have a greater chance of an "economic soft landing", he said.