Thailand to fall behind in rice exports
Thailand
Politics

Thailand to fall behind in rice exports

"Vietnam, India and Myanmar are key competitors in the rice market but Vietnam is the strongest competitor as the country is determined to become the world's leading rice exporter," Ms Korbsuk said.

She said Vietnam may surpass Thailand within five years. 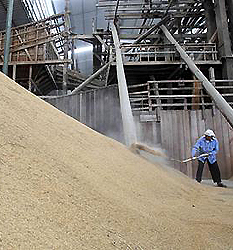 According to the Agriculture and Cooperatives Ministry, both countries would each export 6.5 million tonnes of rice this year.

Thailand and Vietnam together provided the largest share of the rice volume traded in the global market last year.

However, their market share slightly declined from 2010 due to the rising demand for Indian rice.

Ms Korbsuk said Myanmar is another strong competitor in the long run as the country, known as the rice bowl of Asia, is trying to boost its rice exports.

"The government has promised that it will buy the largest volume of rice at high prices that it can in order to satisfy the farmers. This has raised  domestic rice prices and caused the export price to increase," she said.

The total export  of Thai rice had plunged 50 per cent year-on-year with, she said. The country exported only 700,000 tonnes in the first two months of this year.

"The Free On Board (FOB) price for rice in Thailand is set at US$550 per tonne, higher than India by $100, but the government still plans to raise the FOB price to $800 a tonne," the rice official said.

She said the government will likely achieve its rice export target for this year of three million tonnes but Thailand can actually export 10 million tonnes of rice a year.

The government has been buying rice from all farmers since October but it has yet to be sold to foreign countries or the private sector, she added.

YOKOHAMA, Japan: The US flew home its citizens from a coronavirus-infected cruise ship in Japan Monday, with other nations preparing to follow suit as global concerns grow over the spread of the disease and the death toll at its Chinese epicentre topped 1,700.