The private sector is worried that two key anti-terrorism bills on money laundering and providing financial support for terrorists will not be passed and enacted in time, Payungsak Chartsutthipol, chairman of the Federation of Thai Industries, said on Wednesday.

He said a meeting of the parliament's Joint Standing Committee on Industry, Commerce and Banking this morning expressed concern that the two key laws would not be in place before the meeting of the Financial Action Task Force (FATF) scheduled for next February. 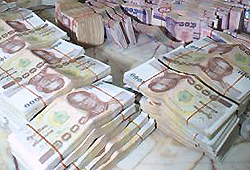 The FATF is an intergovernmental organisation founded in 1989 to develop policies to combat money laundering and terrorism financing. In February this year it put Thailand on its list of high-risk and non-cooperative countries.

The FTI chief called on both the government and the opposition to jcooperate to to ensure these two crucial bills are passed by the House of Representatives by January 2013.

If the bills were not passed and enacted in time, private firms would face a critical problem in executing financial transactions overseas. Moreover, people holding credit cards would face difficulties withdrawing cash through their cards in foreign countries, he said.

Mr Payungsak suggested the government and the opposition agree  on a calling special parliamentary meeting to consider and approve these two bills.

Thai Chamber of Commerce chairman Pongsak Assakul also warned that if the government fails to enact these two laws in time there would be a widespread negative impact on Thai people and businesses.

Some foreign countries already do not allow the use of credit cards issued in Thailand. In additiom, foreign trade had begun facing problems because some trading partners had asked for details of shareholders of Thai firms and for confirmation that they were not involved in terrorism, said Mr Pongsak.

Democrat leader Abhisit Vejjajiva, the opposition leader in the House, said on Tuesday that his party was ready to support these two government bills.

He said the Democrats will give full support to the rapid passage and enactment of this anti-terrorism legislation to boost the confidence of foreign investors.

With the support of the Democrats, Mr Abhisit believed the bills would be passed by the House of Representatives some time in January 2013. This would be in time for the meeting of the Financial Action Task Force in February. 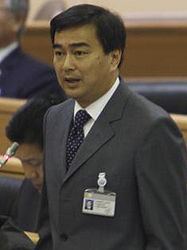 The Democrat leader said this expectation was based on the hypothesis that the government would not again table the controversial reconciliation and the charter amendment bills in the parliament.

Meanwhile, the central bank reported on Wednesday that both industry and non-industry sectors thought that the business situation in April was worse that in March and this had lowered the business sentiment index (BSI) for April to 47.7.

The Bank of Thailand attributed the set back in business confidence to the decline in manufacturing output  in the face of a decrease in orders.

The business confidence in the outlook for the next three months stood at 56.6, staying above the 50 level, and showed that manufacturers had confidence that business would gradually improve, the central bank said.

However, manufacturers expressed concern over the increase in labour costs as a result of the government’s 300 baht daily minimum wage policy in the face of rising prices of raw materials, which raised production costs.

The BoT said manufacturers' current investment confidence stood at 59.1, but the index for the next three months was 62.0.

Being able to stay above the 50 level, these two economic figures showed that manufacturers still had high confidence in the country’s economic fundamentals and were ready to increase their investment in the near future, the central bank said.