He redefines opulence, glamour, design and absolute beauty. He dazzles audiences with mesmerising creations in elegant fabrics, colours and silhouettes. Being intensely concerned with design as an art form, he draws on history, fantasy and folklore to create masterpieces that retail for up to $18,000. 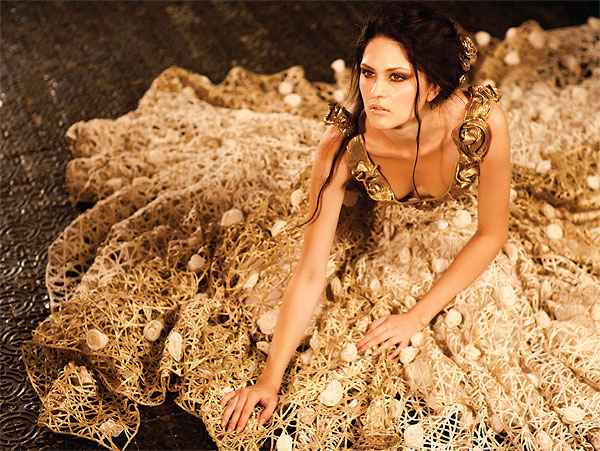 One of Rohit Bal's collection

Bal’s clientele includes Uma Thurman, Cindy Crawford, Pamela Anderson, Naomi Campbell and Anna Kournikova. Most of his fashion shows in India, New York, Paris and Singapore are sponsored by The Swatch Group. He has also been the brand ambassador for Omega since 2001.

He is best known for his use of lotus and peacock motifs, and for spectacular construction of his clothing. His designs are questionably ready-to-wear, borderline couture. The details are often intricate and incredibly textural, including overlays of white and gold, floral threadwork, crochet cutouts, and traditional textiles. Wider silhouettes boast a floral pleat at the bottom, and the precise construction of each simple crushed silk design in neutral colours is telling. 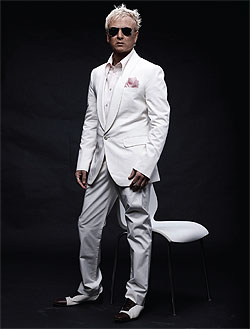 However, there is no one signature style that the designer sticks to. Bal, whom Time magazine profiled as India’s “master of fabric and fantasy” in 1996, commands immense respect from the top echelons of fashion world. With a flagship store in Delhi as well as outlets in Mumbai, Bangalore, Ahmedabad, Kolkata and Chennai, he recently ventured into designing jewellery.

Having represented India on a global platform, he prefers to make exotic locales more exciting with Indian designs.

“Whenever I’m approached to make celebrity outfits for special events abroad, I prefer making garments that speak of our rich heritage in as stylish a manner as I can,” he says. “So be it actor Deepika Padukone’s sari or Arjun Rampal’s jodhpuri and bandhgala at Cannes, the West should know that the Indian sense of clothing is evolving without aping them.”

Though he is close to most Bollywood celebs, Bal is not keen to do clothes for films. “I will do clothes for their personal wardrobes or occasions, but except Mr B (actor Amitabh Bachchan) for his famous quiz serial Kaun Banega Crorepati, I haven’t done a full-fledged wardrobe for any films or TV show,” he explains.

“As a designer, I don’t just work on designs. These garments are my babies, and I can’t just produce them overnight. I can’t compromise on quality at any cost.”

One of India’s best known designers with over two decades in the fashion industry, Bal – also called Gudda – is experimenting and expanding his business through international tie-ups that involve a range of products from jewellery to interiors. From associating with a carpet line to designing a luxury hotel in Goa, he’s busy with a slew of projects.

“There are so many projects that are keeping me busy nowadays. I’m associated with a very large carpet project. This is a worldwide tie-up and will be launched in September. I can’t name the company. But yes, this is one of the projects.

“I’ve also tied up with an international textile company where I will be doing an entire collection of menswear. From shirts, trousers to ties and cufflinks, every man will find everything of his interest. The collection will be sold at 9 AM stores and at my stores in India very soon.”

Bal is credited with changing the face of Indian fashion with his design sensibilities. After completing his graduation from St Stephen’s College with first-class honours in history, the designer knew where his interests lay. He took a baby step by joining his brother’s export firm before launching his debut menswear line in 1990. He also took a course at the National Institute of Fashion Technology where he learned the art from cutting to stitching.

From villages where craftsmen wove and handcrafted dreams, and factories and workshops, to the grandeur of boutiques, Bal has experienced fashion in all its hues. And the rest is history. He is perhaps one of the few names to have a range of collaborations to his credit – Hidesign, Oriflame, Mitsubishi Outlander and Windproof Zippo Lighter – to name just a few.

“I choose a brand if it has scope of utilising my ideas and creativity to create something outstanding,” he says. “I am also tying up with a jewellery brand to design some ethnic and trendy pieces. Last is a tie-up with a shoe brand and I will be making a line of shoes.”

Bal is also currently associated with two luxury restaurants in Delhi – Veda and Cibo. On his personal life, the designer is hardly ever written about without the phrase “enfant terrible’’ following his name, perhaps owing to his wild parties and lavish lifestyle. He’s back in the designing game now after recovering from a massive heart attack.