TCC Group's bid for F&N last week is just one of what could be several acquisitions to expand the Sirivadhanabhakdi empire.

The children of Charoen Sirivadhanabhakdi prefer the media call their father "business tycoon" and not "whisky tycoon", as his empire extends well beyond liquor these days. 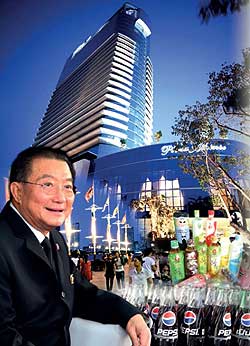 But Mr Charoen made his fortune from the whisky brands Mekhong and Hong Thong, and alcohol still forms a core holding in his empire.

His company TCC Group stands for two inspirations from the whisky industry he worked with _ Thalerng (Laochinda) and Chul (Kanchanalak) _ along with Mr Charoen himself.

Liquor reportedly generates over 100 billion baht for the group each year, while Chang beer is expected to add 35-36 billion baht.

From this enormous base the group has expanded recently both at home and abroad.

"All of the company's investment budget will come from our cash flow," a TCC Group executive said.

Last week's 70-billion-baht takeover of Singapore-based F&N group by the Sirivadhanabhakdi family is perhaps only the tip of the acquisitions iceberg for Thailand's "takeover king", who ranked third in Forbes' wealth scale for the country.

The move could spell new chapter for TCC Group in international markets, said a marketing veteran.

"This scene marks a vital transition for the group to leverage synergy to prepare for expanding overseas," he added.

The source expects a series of takeovers by TCC Group now that Mr Charoen, 68, is beginning to lay the foundation for the next generation of his family. 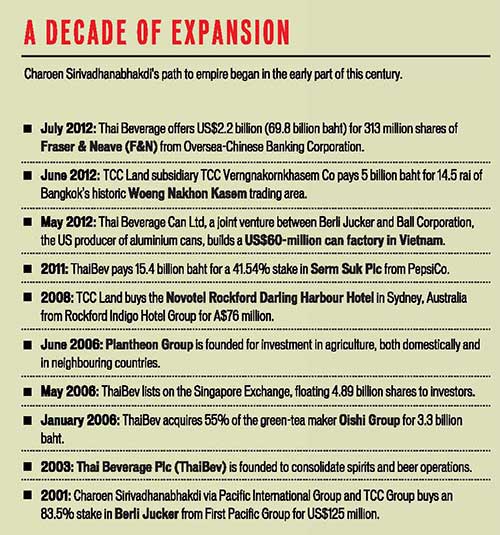 TCC Group has increased its portfolio of businesses over the past decade, and his five children _ Atinan, Wallapa, Thapana, Thapanee, and Panot _ have been assigned to look after this stable that includes property and land development, hospitality, retail, agriculture, and insurance.

However, Mr Panot, the youngest son of Mr Charoen, earlier said to Business Post that TCC will continue focusing on existing businesses.

The group will not expand to non-core businesses, but rather grow from what it has today.

According to Mr Panot, TCC Group wants its businesses to have a respectable global presence.

The group's latest property development, Asiatique, reflects Mr Charoen's ambition to make the 72-rai plot of land next to the Chao Phraya River a historic site with a museum and theatre along with shopping.

"The land is reportedly the most cherished property of Mr Charoen, who spent his childhood near the area," said an executive of TCC Group.

He has gradually increased his holdings at the site over the past 25 years, after first buying some plots on the river bank from the defunct East Asiatic Co in 1987.

He also holds more historic lands in Chinatown and several plots on the river bank that are ready to be developed in connection to Asiatique.

Last month, TCC Group won a bid for 14.5 rai in the historic trading area Woeng Nakhon Kasem for 5 billion baht. The group will discuss with representatives of the 500 residents in the area how to develop the site.

Future expansion could include a bid for 13 rai of land in Sam Yan from the Property Management Office of Chulalongkorn University.

Chalit Limpanavech, an adviser at the Thailand Management Association, is not surprised by the heavy business expansion of Mr Charoen.

He is a cash-rich tycoon who wants to enlarge his empire to cover more products and increase its strength in existing businesses, said Mr Chalit.

Thai Beverage's purchase of 22% of Fraser & Neave means it will add new beverages to its portfolio, particularly beer, he added.

"It could add teeth to the business and beat its arch-rival, Singha Corporation, which has two strong brands, Singha and Leo," he said.

Another marketer said the global downturn is a good time to find potential deals.

"Acquisitions are a great shortcut for buyers," the source said.

Thai Beverage's investment in F&N was to expand its beverage empire in Thailand, including Oishi green tea, he added.

Thai Beverage has spent heavily in recent years to strengthen its sales network, including 2.5 billion baht to open logistics centres across the region.

The company subsequently bought Serm Suk Co, currently the local bottler for Pepsi, to enhance distribution efficiency as Serm Suk is considered to have the best distribution facility for beverages in the country, particularly for traditional distribution channels, said the marketer.

Starting in the trading business, Mr Charoen and his family expanded aggressively in the liquor, sugar milling, banking and insurance fields during the 1980s and early 1990s.

Mr Charoen entered into the Thai beer market in 1995 by setting up a joint venture with Danish brewer Carlsberg to produce Chang (Elephant) brand.

He later formed Beer Thai Co to manage marketing and distribution for Chang.

Asia's financial crisis of 1997/98, which led to the closure of financial institutions owned by his family, forced him to leave Thailand and stay overseas for a while.

His fortunes changed after the company intensified a battle for Chang's market share in 1999 by cutting its wholesale prices and gained ground on its arch-rival Singha Corporation, which had been selling Thailand's best-known beer Singha since 1933.

Beer Thai was later restructured and became part of Thai Beverage before listing in Singapore in 2006.

Thai Beverage said last Wednesday it would spend 2.5 billion baht ($79 million) to set up four distribution centres as part of its push into other Southeast Asian markets.

As patriarch, Mr Charoen has kept the business in the family in other ways.

He is chairman of venerable Thai trading firm Berli Jucker but son-in-law Aswin Techajaroenvikul leads it as it embarks on major expansion plans in the region.

Mr Charoen has also tried to venture beyond beverages and real estate into sport.

In 2004, he expressed interest in buying a stake in English soccer giants and five-time European champions Liverpool FC, with then Thai Prime Minister Thaksin Shinawatra as a potential partner in a 25% share.

The agreement fell through but Mr Charoen stayed close to English soccer by clinching a $2.75-million deal to advertise Chang beer on the shirts of Everton, Liverpool's biggest rivals.